Background: Hemoglobinopathies are among the most common inherited diseases around the world. They have become much more common recently in northern and central Europe, including Germany, due to immigration.

Method: Selective review of the literature with consideration of national guidelines.

Results: The hemoglobinopathies encompass all genetic diseases of hemoglobin. They fall into two main groups: thalassemia syndromes and structural hemoglobin variants (abnormal hemoglobins). α- and β-thalassemia are the main types of thalassemia; the main structural hemoglobin variants are HbS, HbE and HbC. There are many subtypes and combined types in each group. The highly variable clinical manifestations of the hemoglobinopathies range from mild hypochromic anemia to moderate hematological disease to severe, lifelong, transfusion-dependent anemia with multiorgan involvement. Stem-cell transplantation is the preferred treatment for the severe forms of thalassemia. Supportive, rather than curative, treatment consists of periodic blood transfusions for life, combined with iron chelation. Drugs to treat the symptoms of sickle-cell disease include analgesics, antibiotics, ACE inhibitors and hydroxyurea. Blood transfusions should be given only when strictly indicated. More than 90% of patients currently survive into adulthood. Optimally treated patients have a projected life span of 50 to 60 years.

With approximately 7% of the worldwide population being carriers, hemoglobinopathies are the most common monogenic diseases and one of the world’s major health problems (1, 2, e1, e2). They were originally found mainly in the Mediterranean area and large parts of Asia and Africa (3). International migration has spread them from those areas all over the world. In many parts of Europe today, hemoglobin (Hb) defects are classified as endemic diseases (3) (Table 1 gif ppt).

Germany is one of the countries in which hemoglobinopathies have increased in recent years (4–7). There are no epidemiological studies on their frequency. The following statements can be made regarding gene carriers: prevalence among the 9 million immigrants from countries with a high risk of hemoglobinopathies as a whole is 4.5%, giving a figure of 400 000 for the number of hemoglobinopathy gene carriers (6). The total number of patients diagnosed with these diseases in the author’s laboratory from 1970 to 2010 is 5831.

This review article should be considered an extension of the original article “Hemoglobinopathies in Germany—a longitudinal study over four decades,” also published in Deutsches Ärzteblatt International (6). It aims to provide a brief summary of the most important clinical pictures and indicate the features that can be used to identify those with these diseases with low-level symptoms, but not gene carriers in good health, in general practice (Tables 2, 3). Topical grounds for the publication of this article are the increase in the number of people affected, which has implications for care provision, and the fact that optimum treatment can give patients a steadily-increasing projected life span. As a result, medical treatment is becoming more and more part of adult medicine, rather than pediatrics alone.

Hemoglobin testing is particularly indicated in the following situations (8, 9):

Generalized hemoglobin electrophoresis for all cases of anemia cannot be justified on the basis of expediency or financial considerations, particularly in those with no background of migration.

The umbrella term “hemoglobinopathy” includes all genetic hemoglobin disorders. These are divided into two main groups as follows:

Both are caused by mutations and/or deletions in the α- or β-globin genes. When gene defects cause Hb synthesis disorders, this gives rise to thalassemia. Hemoglobin structure in these cases is normal. When they cause changes in Hb structure, this gives rise to abnormal hemoglobin (5, 6, 11). There are also many mixed forms that combine features of both groups, e.g. β0/β+-thalassemias, HbSC disease and HbE α-thalassemias. The common features of the pathophysiology and various disease patterns are limited, and as a result so are the possibilities for summarizing them.

α-thalassemias are caused by an α-globin chain synthesis defect. At the molecular level, they result from partial (α+) or total (α0) deletions, or more rarely mutations, of one or more of the four α-globin genes (αα/αα). They occur mainly in Africa, Arab nations, and, more frequently, South-East Asia (5).

Diagnostic criteria and cardinal symptoms: there are four clinical pictures of α-thalassemia, according to the number of genes affected by loss of function (5, 12). All of them become manifest perinatally (Table 2):

β-thalassemia syndromes (Table 2) are the result of insufficient (β+) or absent (β0) production of β-globin chains. Their molecular causes are β-globin gene mutations. Most patients come from Mediterranean countries, South-East Europe, Arab nations, and Asia. Hematological changes become manifest from between the ages of three months and six months onwards (5, 6, 13).

This group of autosomal dominant inherited hemoglobin disorders is caused by structural defects resulting from an altered amino acid sequence in the α or β chains (3, 10, 14). Clinicians must distinguish between clinically harmless Hb abnormalities and those that cause illness (Table 3 gif ppt). These latter are divided into the following four well-defined groups:

The forms in the third and fourth groups cause serious illness when heterozygous. When homozygous, they are fatal.

The main Hb abnormalities, both worldwide and among immigrants living in Germany, are HbS, HbC, and HbE. The large groups of rare Hb abnormalities that occur only in isolated cases all over the world should also be monitored. These are often accompanied by hemolysis, polycythemia, and/or cyanosis. Identifying these is an important part of differential diagnosis of hematological diseases where other efforts towards diagnosis have proved inconclusive (3, 6, 10, 11).

The term “sickle-cell disease” includes all manifestations of abnormal HbS levels (proportion of HbS >50%). These include homozygous sickle-cell disease (HbSS) and a range of mixed heterozygous hemoglobinopathies (HbS/β-thalassemia, HbSC disease, and other combinations) (14).

According to the International Nomenclature, the previously commonly-used term “sickle-cell anemia” should not be used, as the dominant aspects of the disease are vascular obliterations and the organ damage they cause, not anemia.

HbS is the most dangerous of all hemoglobinopathies. The sickle cells caused by a lack of oxygen lead to vascular obliterations, so infarctions with tissue death can occur in almost all organs (skin, liver, spleen, bone, kidneys, retina, CNS). Chronic hemolytic anemia can usually be well tolerated (14). Aplastic crises are seen with severe anemia following viral infections (2).

Diagnostic criteria and cardinal symptoms: Symptoms begin before the age of one, with chronic hemolytic anemia and developmental disorders (Table 3). The main problems are pain crises (sickle-cell crises) that can affect the back, extremities, thorax, abdomen, and CNS in particular. Patients are also dangerously susceptible to infection, particularly by pneumococci, hemophilus, salmonellae, klebsiellae, and mycoplasmae. Sepsis, osteomyelitis, and meningeal events, sometimes with cardiac involvement, frequently result in death. Spleen crises, acute thoracic syndrome (ATS), and strokes are also fatal in more than a few cases. These issues cause serious organ damage.

Optimally treated patients can have a projected life span of 50 to 60 years.

Heterozygous HbS gene carriers are not affected clinically or hematologically (18).

HbE is an extremely common Hb variant native to South-East Asia. Its disease pattern is similar to that of β-thalassemias. Hb is also unstable, which means that hemolysis can be caused by viral infections and medications (Table 3). HbE is often combined with thalassemias, which may result in serious major-form hemoglobinopathies (2, 3, 10).

After being diagnosed, patients should be referred to a hematology center for counseling and to decide on treatment, and, if appropriate, for regular diagnosis appraisal (Table 4).

The current international standard treatment (18–20) is based on the results of studies conducted at large sites in England (5) and the USA (3) and is stated in available child and adolescent medicine guidelines (20) (AWMF/II/025–017.htm).

Curative treatment: Hematopoietic stem-cell transplantation is the first-line treatment if a donor can be found (21).

– Iron removal using deferoxamine: Standard deferoxamine treatment is a daily subcutaneous infusion (over several hours) at a dose of (20) – 40 – (50) mg/kg BW, 5 to 7 days per week. Dose adjustment is based on monthly testing of serum ferritin concentration. Patients must be closely monitored for potential side effects of deferoxamine (reduced growth, bone damage, high-frequency hearing loss, retinal damage) (20).

– Iron removal with deferasirox: Deferasirox is a well-tolerated iron chelator in tablet form and has taken on a central role in iron removal therapy (22, 23). However, this is a relatively new drug of which no long-term studies have been conducted. A standard dose of 20 mg/kg BW/day is recommended for patients with β-thalassemia major who are receiving long-term transfusion therapy. This dose must be adjusted on the basis of monthly measuring of ferritin levels. The main side effects (close monitoring required!) are kidney failure, agranulocytosis, and liver failure (22, 23). Liver iron levels must be measured every two years (Table 4).

For severe anemia, folic acid supplements (0.5 mg/day orally) may be considered (2). Iron supplements are contraindicated unless there is simultaneous iron deficiency.

α-thalassemia minima and minor do not require treatment. Iron supplements are contraindicated (except in cases of iron deficiency) (20).

Treatment for HbH disease depends on the severity of the clinical picture, which can vary widely. Transfusions are rarely indicated. Anemia requires regular substitution with folic acid (e.g. 5 mg/week) (2, 20). Iron supplements are contraindicated (unless there is simultaneous iron deficiency).

For Hb Bart’s syndrome, transfusions are required in utero and continuously after birth. Where possible, stem-cell transplantation is performed (12, 20).

Following diagnosis, patients should be referred to a hematology center for counseling and to decide on treatment, and, if appropriate, for regular diagnosis appraisal (Table 5 gif ppt). The current standard treatment (18) is based on the results of studies conducted at large sites in England (5, e6, e7) and the USA (14) and is stated in available guidelines (18) (AWMF/II/025–016.htm).

Allogeneic stem-cell transplantation may be used for children under 16 (21, e9). Indications are CNS infarction, particularly severe, frequent pain crises, or frequent occurence of acute thoracic syndromes. For older patients, transplantation is usually not an option due to a lack of donors and the high risks of transplantation.

Prophylactic penicillin must also be administered from the age of three months onwards, for at least five years.

The most important guidelines for psychosocial treatment are stated in the eTable (gif ppt).

Evidence available on treatment for hemoglobinopathies

The evidence available in the literature is consistent and ranges from meta-analyses of controlled studies to field reports (5, 7, 13, 14). The evidence supports stem-cell transplantation (21), transfusion therapy (5, 7), and treatment for secondary hemosiderosis (22, 23) to treat thalassemias; and symptomatic treatment as a whole, including hydroxyurea treatment, to treat sickle-cell disease (8, 14, 25).

The projected life span and quality of life of patients with severe hemoglobin disorders can be significantly improved using advanced treatment methods. In contrast to other European countries, in Germany there is unfortunately still no comprehensive overall approach to optimum diagnosis and treatment strategies. One problem that has barely been addressed is continued treatment after patients have moved from pediatric or adolescent care to adult care. It would be particularly desirable to establish hemoglobinopathy care centers at which interdisciplinary teams care for patients, as happens in neighboring countries (25). 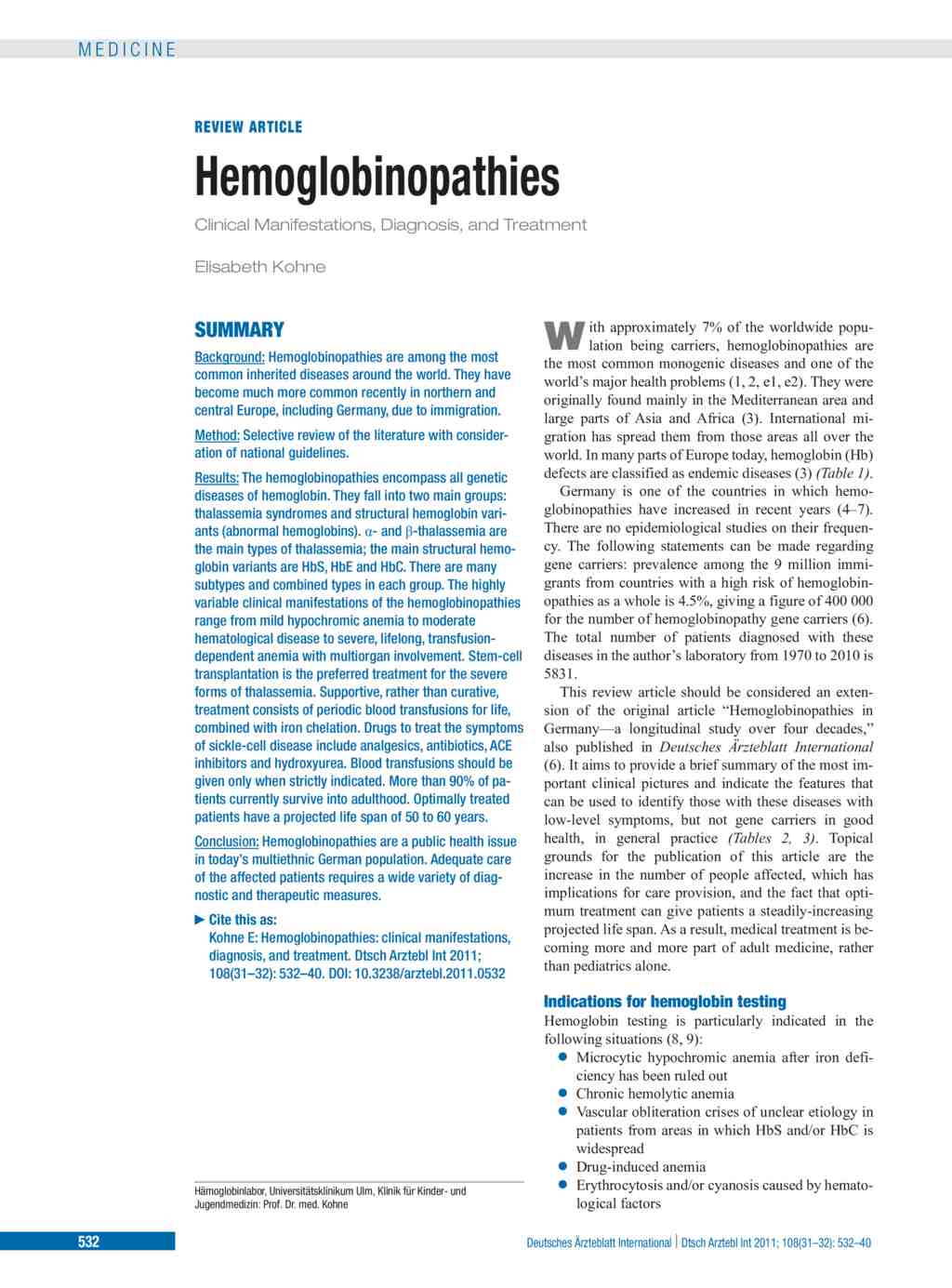