Alternative Approaches to the Treatment of Fecal Incontinence

No general recommendation to treat fecal incontinence in any particular way can be derived from the individual studies published to date (2). Despite this, certain types of treatment without any clear evidence of efficacy are now reimbursable by the statutory health insurance carriers in Germany, while others cannot be ordered. The frequent result is a fruitless struggle with the Medical Service of Health Insurance Companies in Germany (Medizinischer Dienst der Krankenversicherung, MDK) and with the statutory health insurance carriers (Gesetzliche Krankenversicherungen, GKV), ending in the refusal of payment for indicated treatment. Such conflicts are annoying, and the denial of treatment for our patients is regrettable. Yet there is a real lack of evidence-based treatment due to the inadequacy of scientific study in this area.

The three goals (targets) to which the term 3T refers are:

Medium-frequency electrostimulation (AM-MF) exerts its effect through summation of action potentials. It is less painful than low-frequency stimulation (LFS), because it requires a less intense current. In LFS, the current must be intense enough to stimulate slow muscle fibers as well; many patients find such high currents unpleasant or painful.

The latter consideration led to the hypothesis that Thilo Schwandner, Claudia Hemmelmann, and colleagues tested in their second multicenter, randomized trial, as reported in the current issue of the Deutsches Ärzteblatt International (5). This trial, on a smaller scale than the first one, included 80 patients, who were to be treated for six months. Nearly all of them were treated for the entire six months, as planned. This second trial compared 3T with low-frequency stimulation.

This trial, too, can be criticized for the short duration of treatment and follow-up, yet one should bear in mind that, for practical reasons, a longer trial would not have been feasible with the desired statistical power.

The design of the trial can be criticized, too: 3T was compared to LFS alone, rather than LFS combined with biofeedback. For this very reason, however, the trial was able to show that LFS by itself, a treatment currently listed as reimbursable in the Medical Aids Directory (Hilfsmittelverzeichnis) of the GKV, appears to have no effect and ought to be abandoned. This finding is one of the authors’ two valuable achievements; the other one is that they have provided good evidence for the efficacy of an alternative treatment, 3T, while considering and discussing the relevant pathophysiological issues in detail. 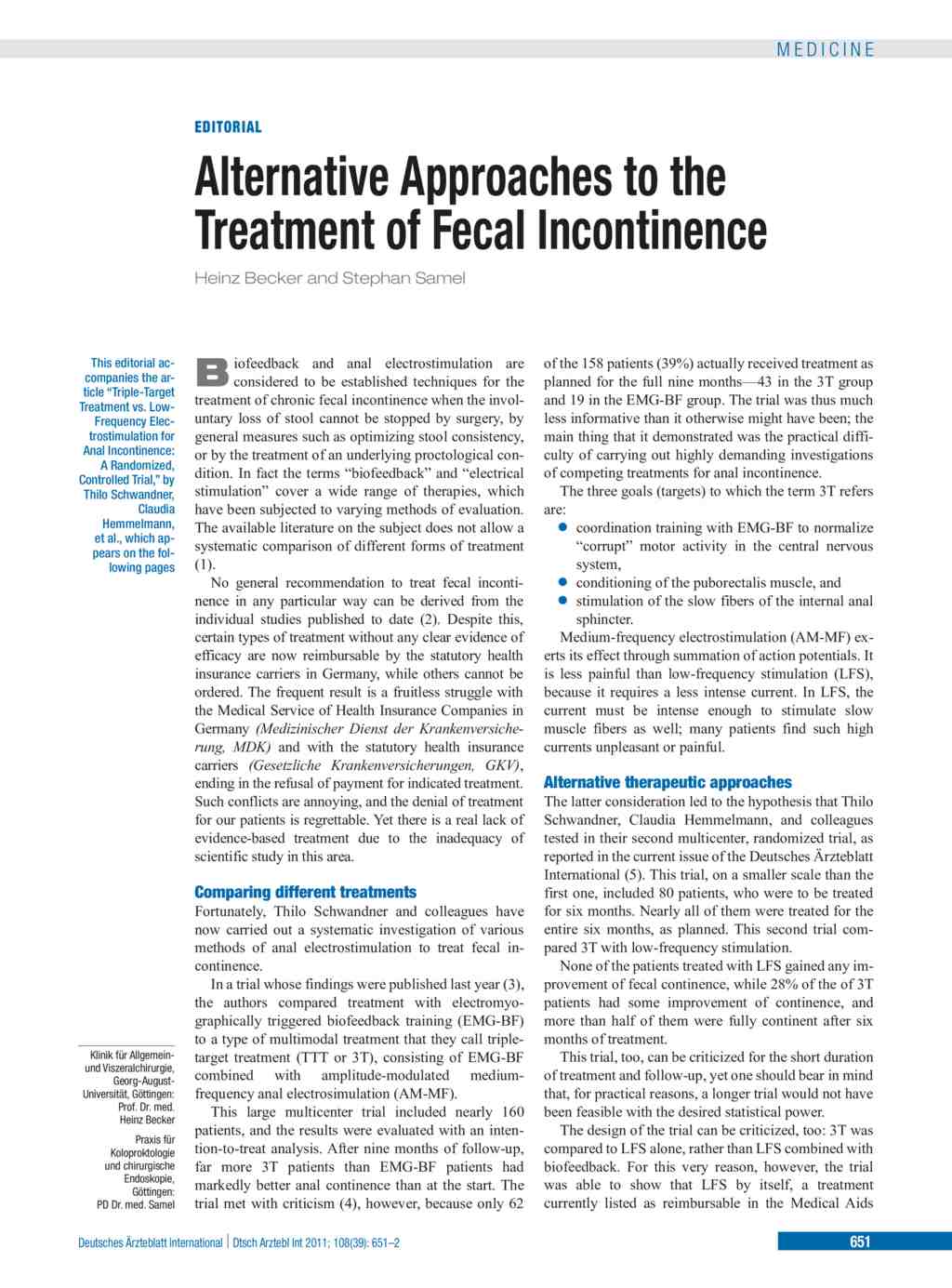