an Indispensible Part of Clinical Research

The critical evaluation of scientific publications represents a crucial element of physicians’ continuing education and its importance has been emphasized since the early days of evidence-based medicine (1). To this end, Prof. Maria Blettner and her team have been publishing a series of tutorials on appraisal of specialist literature in Deutsches Ärzteblatt (2–4). The latest article in the series (Part 17) appears in this issue and deals with randomized controlled trials (RCTs) (5).

RCTs have one decisive advantage over non-randomized studies for the evaluation of therapeutic procedures: In all probability, randomization will result in the different groups of patients in the study being comparable with regard to prognostic factors (6). In other words, the groups could be expected to show the same event rate (number of desired or undesired events per unit of time at risk) over the study period if they received the same treatment.

In all probability, randomization renders the groups comparable not only in respect of known prognostic factors, but also with regard to unknown factors, e.g., genetic factors, that might affect the outcome. This structural equivalence of patient groups gives RCTs a conclusive advantage over non-randomized studies, even if certain types of non-randomized trials approach the ideal of structural equivalence. For this reason, RCTs are viewed as the gold standard for appraisal of the efficacy of interventions.

When patient groups in an RCT with a sufficiently high number of cases are treated differently, any differences in the event rates can be attributed to the various treatments—provided the data are free of major distortion by factors such as selection bias and information bias.

Randomization is also beneficial in terms of statistical analysis. The statistical test of significance is readily interpretable—although it often remains poorly understood and is frequently misused, e.g., to support the researchers’ favored hypothesis (7).

The goal of an RCT performed as a drug licensing trial (i.e., a superiority study) is to show that a new drug is superior to an existing standard treatment or placebo with regard to an endpoint that has been defined a priori—frequently a “hard” endpoint such as survival. The proof of superiority is consciously and intentionally obtained under conditions that do not necessarily reflect everyday clinical practice. These conditions include:

There are cogent reasons for enforcing these conditions in drug licensing trials: It is easier to discern the superiority of a new drug if disturbing factors are reduced to a minimum, i.e., if the investigation is conducted under ideal conditions.

The improved detectability of drug efficacy is attended, however, by disadvantages. From the clinician’s perspective, the drug is tested in selected populations under artificial conditions. Furthermore, RCTs generally have hard primary endpoints such as survival, and endpoints that are clinically relevant and important for the patient, e.g., quality of life or rate of hospitalization, may well not be investigated. For this reason, drug licensing trials frequently answer various questions inadequately or not at all. For example, what is the effect of the drug

Drug licensing trials are usually optimized for demonstration of superiority. The minimum numbers of cases required for these trials may be oriented on an effect, minimal from the clinical viewpoint—e.g., 5% lower 2-year mortality with the new treatment than with the standard therapy—that the researchers want to be able to confirm statistically. Thus the increased occurrence of adverse effects, which are often less frequent than the primary endpoints on which the case number calculation of the RCT is based, are demonstrated with insufficient statistical power, unless the treatment effects with regard to adverse effects are much greater than the minimal effect used for calculation of case numbers. Moreover, the relatively late occurrence of adverse effects in the observation period of RCTs may lead to increased rates of adverse effects caused by the drug not being detected in drug licensing trials. Therefore, although RCTs are rightly viewed as the gold standard from the epistemiological perspective, in practice they have limitations regarding the evaluation of unwanted effects.

For this reason Germany’s Medicinal Products Act (Arzneimittelgesetz, AMG) demands that approval of a drug for general use be followed by phase-IV studies or observational studies to answer these open questions.

Critics bemoan the artificial nature of drug licensing trials. These detractors should ask themselves whether it is reasonable to discuss the use in routine clinical practice (effectiveness) of a drug that has not even been shown to be effective in ideal conditions. Drug licensing trials (superiority studies) are intended to prevent the licensing of drugs that are ineffective or merely have the same effect as established treatments (comparison with standard therapy).

Every well-trained physician should have the ability to critically appraise scientific publications on clinical research. The tutorials published in Deutsches Ärzteblatt, with its circulation of 400 000 copies, play an important part in reinforcing the readers’ capacity for critical evaluation of medical scientific literature. 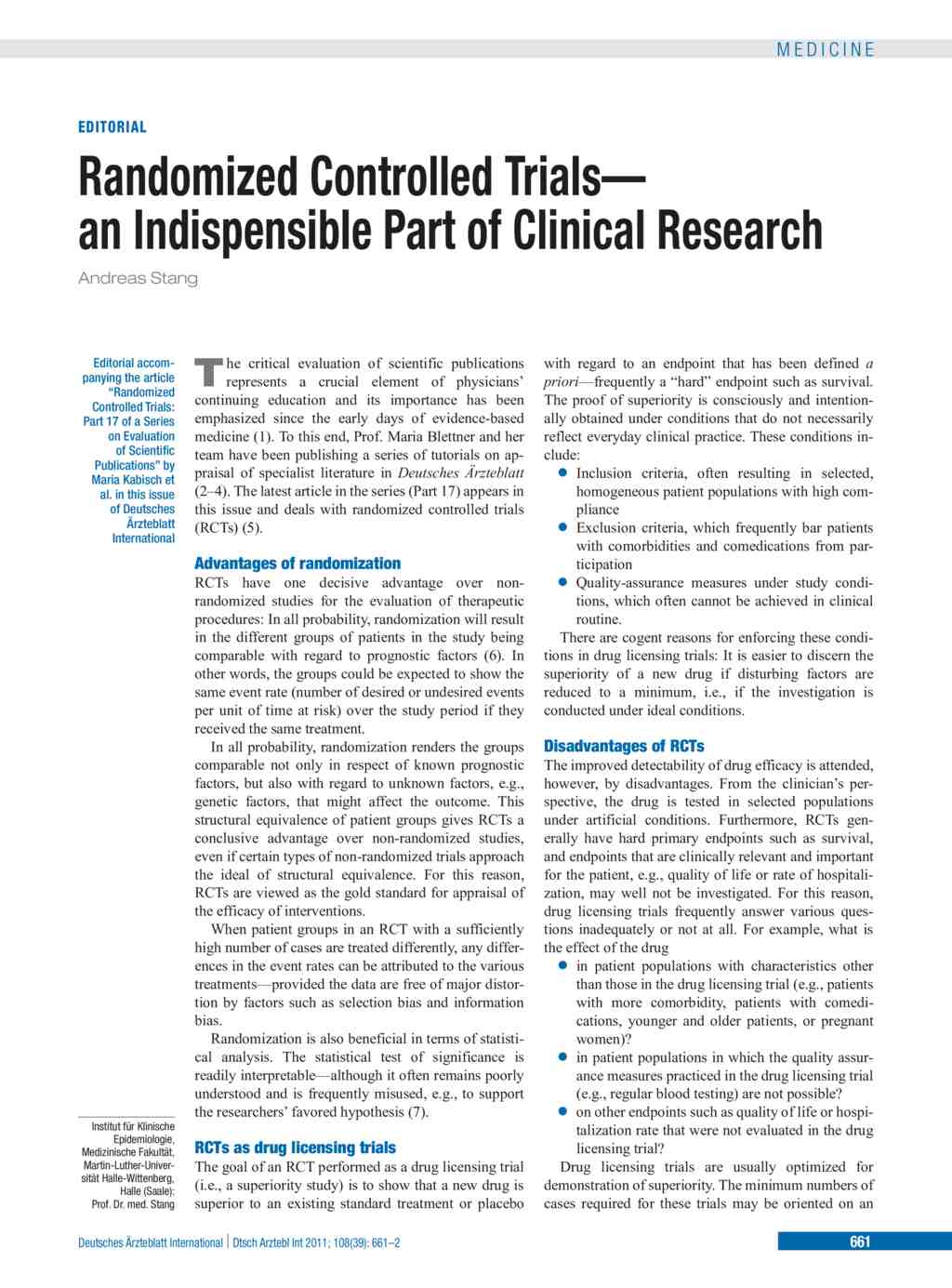