Method: This S3 guideline is based on a systematic review of the pertinent literature.

The content of the present guideline is based on an extensive review of the literature (Figure 1 gif ppt). Definitions of evidence level, recommendation grade, and consensus strength were established (e1, e2) (Table 1 gif ppt, 2 gif ppt). The text was agreed by the guideline group (Box 1 gif ppt) at two consensus conferences.

In clinical routine, classification according to the relationship to the sphincter has proved useful (3) (Figure 2 gif ppt). Types 4 and 5 are not cryptoglandular fistulas.

Digital examination and probing are sufficient for diagnosis (4).

The tract of the fistula and its relationship to the sphincter muscle can be investigated by probing and/or dyeing intraoperatively with the patient under anesthesia (5, e5).

If the history suggests it, chronic inflammatory bowel disease should be ruled out perioperatively. Sphincter function should be assessed before any operative intervention, on the basis of the history and, if appropriate, an incontinence score (evidence level: 4; recommendation grade: B; consensus strength: strong consensus).

Because of the radiation burden, visualization of fistulas using contrast media (e7) and computed tomography (CT) is regarded as obsolete.

A simple and cheap technique available is endosonography, the usefulness of which can be improved by contrast enhancement, e.g., using hydrogen peroxide. The correlation between intra-anal ultrasonography and intraoperative clinical examination is better than 90% (6, e8–e10). The advantage of endosonography is that it is easy and cheap to use, but it does depend to a high degree on the examiner’s experience.

Magnetic resonance imaging (MRI) can be employed either as an external investigation with or without contrast medium, or using an intrarectal coil (7, e11). MRI is cost-intensive, not always available, and its diagnostic value depends on technical conditions; however, it is to be preferred to endosonography for lesions distant from the anus. Other advantages of MRI are that it allows pain-free acquisition of images that can be evaluated independently of the examiner (evidence level: 1a; recommendation grade: A; consensus strength: strong consensus).

Unfortunately a total of only 10 randomized studies have been carried out, each of which compared only partial aspects of treatment for fistula. The other studies are observational studies from various hospitals with inhomogeneous patient groups. Because of this, the conclusions of the reviews are mostly of a general nature.

Published guidelines of other professional organizations (12, 13) are partly out of date, since for example the plug technique is not included.

To produce the present guideline, the available literature was analyzed afresh and the results set out in evidence tables. These may be accessed via the Internet at www.awmf.org/uploads/tx_szleitlinien/088–003l_S3_Kryptoglanduläre_Analfisteln_2011_10.pdf (German-language publication).

The most common operative technique in use is fistulotomy, that is, division of the tissue between the fistula tract and the anal canal. Twenty-eight studies, most of them retrospective, that dealt with this treatment were identified. Healing rates are between 74% and 100%. Rates of impaired continence vary between 0 and 45% (14–16, e12–e18). For low fistulas, a healing rate of almost 100% can be achieved. Postoperative incontinence rates are described in the literature as relatively low, but this is still a sequela to be taken seriously. In all cases the incontinence rate rises with the amount of sphincter that is divided. Extensive division should always be avoided (evidence level: 2b; recommendation grade: B; consensus strength: strong consensus).

The aim of this technique is long-term drainage of the abscess cavity. This helps to prevent premature closure of the external fistula opening. The thread is removed later to allow spontaneous healing of the fistula. Healing rates in the retrospective observational studies identified vary between 33% and 100%. Impaired continence is reported in 0 to 62% of cases (12, 17, e19–e22). These data are due to the fact that interventions undertaken in addition to placement of the seton are not always clearly defined. To date, no randomized studies exist on this subject.

Placement of a fibrosing seton usually occurs either primarily or secondarily in the setting of an acute or persistent inflammation.

The aim is to fibrose the fistula tract before further surgical interventions. Most often described in the literature is secondary lay open of remaining fistula. The observational studies identified in the literature search report healing rates of nearly 100% (e12, e23–e25). However, this is associated with a high rate of impaired continence. Overall, the data in the literature vary between 0 and 70%.

In Germany, the fibrosing seton is used mainly in high fistulas before definitive reconstruction surgery. Whether the use of the seton promotes success of a reconstructive procedure is not clear.

The aim of the cutting seton is successive division of the parts of the sphincter enclosed by the fistula tract once the inflamed area has been cored out. The seton may be made of various materials. Either it is stretchable (usually rubber) and will gradually cut through the tissue, or repeated tightening will be required. So-called chemical or medicated setons are a particular case; the principle is loose placement of a thread (ksharasootra), as used in ayurvedic therapy. This thread must be changed every week. The aim of treatment is spontaneous loss of the thread after chemical division of the fistular tissue (17).

Thirty-five observational studies were identified, most of them retrospective, which showed a mixed patient group including almost all types of fistula. Healing rates were reported between 80% and 100% (e13, e15, e21, e26–e31). Reported rates of impaired continence were between 0 and 92%.

Recent reviews (18, e32) point to an unacceptably high incontinence rate after use of the cutting seton. In view of the current literature, the recommendation for this method as seen in other guidelines (12, 13) should not be continued.

The aim of the various procedures is excision of the fistula and the cryptoglandular focus of infection with closure of the inner fistula cavity. Five different techniques are used:

In some studies the internal fistula cavity was not covered up after direct suturing of the sphincter muscle; reported healing rates were between 56% and 100% (e33, e34).

Alternatively, the sphincter sutures can be protected by being covered with an advancement flap. This flap can be formed from mucosa, submucosa and superficial parts of the internal muscle (mucosal/submucosal flap. The 30 studies identified showed healing rates between 12% and 100% (15, e34–e45).

Alternatively, a rectal full thickness advancement flap may be used to cover the sutures. The results of the 17 studies identified are largely similar to those using the mucosal/submucosal flap, with healing rates between 33% and 100% and incontinence rates between 0 and 71% (19, e34, e39, e46–e49). Four randomized studies have been published (19, e48–e50).

In fistula excision with primary reconstruction of the sphincter muscle, after complete excision of the fistula and its associated inflammatory tissue, primary readaptation of the divided sphincter apparatus is carried out. The eight studies identified mostly treated high fistulas. Healing rates between 54% and 97% were reported; rates of impaired continence were noted to be 4% to 32% (e55–e58). Especially in patients with high fistulas, wound dehiscence after division and reconstruction is associated with a high risk of incontinence. Overall the data for this technique are still relatively few and the role of reconstruction of even small sphincter defects is at present unclear.

To sum up, surgical reconstruction is an established technique with healing rates between 60% and 80%, and there is no meaningful difference between the various procedures. Reported rates of impaired continence vary, and the risk of impaired continence must be explained to the patient before informed consent to surgery can be given (evidence level: 1b; recommendation grade: A; consensus strength: strong consensus).

After curettage of the fistula tract, the tract is filled with fibrin glue. Results in the literature show healing rates that vary widely between 0 and 100%. Only eight studies give information about continence and report having observed no impairment. The majority of these studies are personal case series involving inhomogeneous patients with a wide variety of fistula types (e31, e59–e65).

The three review articles identified in the literature search (e66–e68) confirm the great heterogeneity of the studies, especially since the good results reported in the earlier studies could not be reproduced in the more recent ones. In the view of the guideline working group, therefore, the use of fibrin glue should be reserved for special cases (evidence level: 1b; recommendation grade: B; consensus strength: strong consensus).

Some authors combine plugging with closing of the internal fistula cavity using an advancement flap. The published observational studies show healing rates between 14% and 93%. Most of them did not investigate continence impairment. Only three studies report unchanged continence (19, 20, e69–e75).

The two randomized studies that compared plugging with surgical closure found markedly lower healing rates with plugging. One study (19) was stopped early because of an unacceptably high rate of recurrence. It appears to be important that the fistula tract is long enough (20).

One review (21) found success rates to vary between 24% and 92%. The rate of recurrent abscess after fistula plugging was 4% to 29%, and the frequency of plug loss was 4% to 41%. A notable feature is the low morbidity of the procedure. Any effect of plugging on continence is expected to be negligible.

A variety of other techniques have been described in the literature only in the form of case reports from individual working groups: radiofrequency ablation, stapling, autologous stem cells, collagen injection, BioLIFT, LIFT (ligation of the intersphincteric fistula tract) (evidence level: 5; recommendation grade: 0; consensus strength: consensus).

In the literature, impaired continence rates are reported as 10% in low fistulas and 50% in high fistulas (24, e78).

Against this background, it is important to give the patient comprehensive information. The sphincter apparatus must be spared as much as possible (evidence level: 1c; recommendation grade: A; consensus strength: strong consensus).

Dr. Berg has had attendance fees at conferences and travel and accommodation expenses reimbursed by Johnson & Johnson. He has received fees from the Falk Foundation and Johnson & Johnson for the preparation of continuing medical education events.

Professor Fürst has received support for travel to conferences from Johnson & Johnson and from Braun-Aesculap, and fees for carrying out commissioned clinical studies from Bayern Innovativ GmbH.

Professor Schiedeck has had attendance fees and travel and accommodation expenses reimbursed, and fees for preparation of scientific continuing education events, from Aesculap Akademie GmbH, Falk Foundation e.V., Johnson & Johnson, and Medical GmbH. He has received fees for carrying out commissioned clinical studies from Solesta and Medela.

Translated from the original German by Kersti Wagstaff MA. 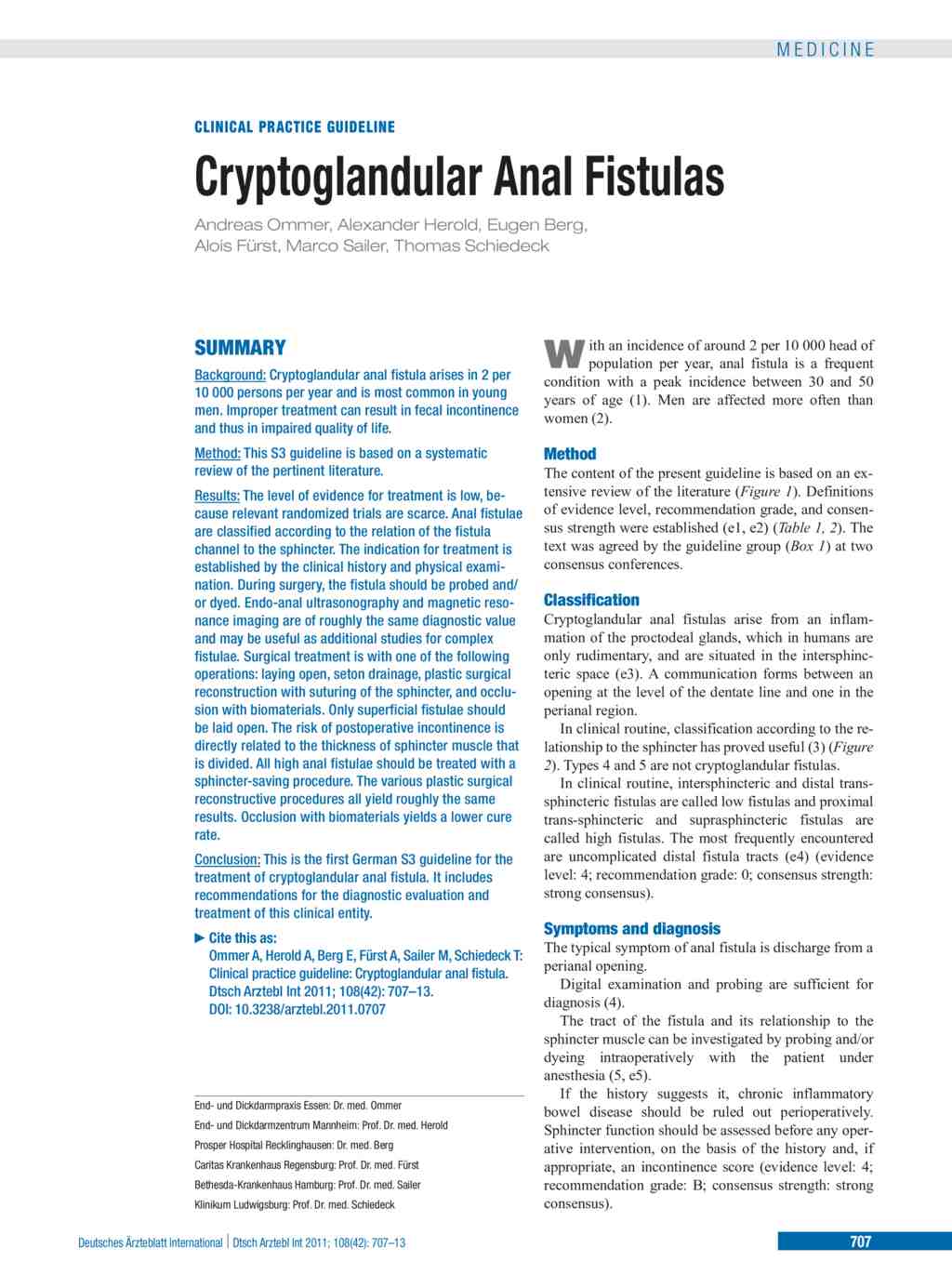