The Investigation of Syncope

Strengths and Weaknesses of Emergency Medicine

Dtsch Arztebl Int 2012; 109(4): 56-7. DOI: 10.3238/arztebl.2012.0056
An editorial to accompany the article „Patients with Syncope in a German Emergency Department: Description of Patients and Processes“ by Sebastian Güldner et al. in this issue of Deutsches Ärzteblatt International

Evaluating syncope is one of the most problematic emergency department (ED) procedures (1). Between 1% and 1.5% (2) or even up to 3% (2) of all emergency patients present with syncope. While syncope can occur due to a harmless orthostatic reaction, it can also be a symptom of a life-threatening structural heart disease. Although diagnosing syncope is important for determining the correct treatment, it is not always easy. In fact, about 40% of all cases of syncope remain unexplained.

Treating patients with syncope is cost intensive. In the USA, for example, more than two billion dollars are spent on this each year (4); the latest figures for Germany are not available.

The central question for the ED doctor is: Do I suspect a serious cause of syncope, in which case the patient should be admitted for inpatient care, or can I send the patient home with a diagnosis of a relatively harmless underlying cause (5)? Answering this question falls within the domain of the ED physicians, provided that they have had sufficient clinical experience and that they base their investigation on standardized and validated approaches (2, 6). However, after hospital admission, the internist, cardiologist, or neurologist who continues with patient care then assumes responsibility.

Undoubtedly, ED physicians who provide initial care for patients with syncope play a key role. How well can they actually accomplish this task? Some answers to this question are provided in the study from von Güldner et al. (7), published in this issue of Deutsches Ärzteblatt International. The authors describe the results of a monocentric retrospective analysis of data from 440 consecutive patients with syncope from a total population of 28 477 patients treated at the ED of the Klinikum Nürnberg (Nuremberg) from 15 May 2009 to 30 September 2009. For the first time, data are presented about the care of patients with syncope from a large-scale, non-selected collective of patients from the ED of a large German hospital. We discover that patients with syncope constitute 1.5% of patients in the ED, that they are on average 62 years old, and that one-fifth of them also showed comorbidity. Additionally, we learn that only 20% of the patients were released for outpatient care, while 50% were admitted to a speciality department, pointing to severe disease in these patients. Thus, it is not surprising that a high percentage of patients (namely, every fifth patient) experienced a syncope-related endpoint within 30 days, such as:

Is the structural quality of German EDs adequate to effectively care for patients with syncope? With regard to the medical equipment, the answer is yes, at least for large EDs, such as that found in Nuremberg. However, this question should probably be asked more frequently about the numbers of staff and qualification/training of physicians and nurses (2, 6). The team led by Professor Christ (7) justifiably would like to see an increase in the use of evidence-based instructions (2, 4–6), similar for example to the certified chest pain units that are part of the standard care for patients with acute coronary syndrome (8). The systematically-evaluated 12-lead ECG, which functions with a sensitivity of 86%, a specificity of 70%, and a negative predictive value of 99%, plays an especially important role here (9). Whether specialized “syncope units“ (7), used as observation stations, would be helpful in optimizing the care of patients with syncope remains to be seen.

Interactions within a syncope network

It is unsatisfactory that a high proportion of syncope cases still remain unexplained following diagnostic evaluation: In this study, the value was determined to be about 45% (7), a value somewhat higher than that of 29% determined by an international meta-analysis (3). In general, advances in syncope clarification will likely only be possible through a better interaction between prehospital and hospital medical services, in terms of both patient care and syncope research. In any case, it would be desirable to have the ED closely networked with those hospital units responsible for the further treatment of syncope patients admitted for inpatient care. At least as important, yet currently even less often implemented, would be to integrate inpatient departments and outpatient practices in so-called syncope networks. The goal of such networks is to optimize cooperation and logistics between hospitals and private practices in order to enable swift identification of the individual etiology of syncope (10). An example of this is given by the local syncope network in Halle (Saale), which has been widely acknowledged by both hospital physicians and physicians in private practice.

The importance of prospective multicenter studies

The Nuremberg team led by Professor Christ should be acknowledged for their excellent contribution to health services research, even though, with the utmost respect, it is “only“ a retrospective monocenter study. One would wish that emergency medicine research in Germany would make the leap to prospective multicenter research activities more frequently, which would not only generate valid results to contribute to evidence-based health services research but could also contribute to increasing the process quality in the ED. The report presented here (7) would provide an excellent basis for such an approach in the field of syncope research. Perhaps a further aspect could then also be included that is often overlooked or disregarded, namely, that of the patients’ anxiety about syncope recurrence, especially when the syncope is unexplained, and about the resulting disorder-related impairment of their quality of life. By considering this, emergency medicine would be addressing an important topic for the patients, one that is often lost in the hectic atmosphere but that is too important to be overlooked. In fact, anxiety can be measured in the ED with an anxiety scale with little time expenditure. 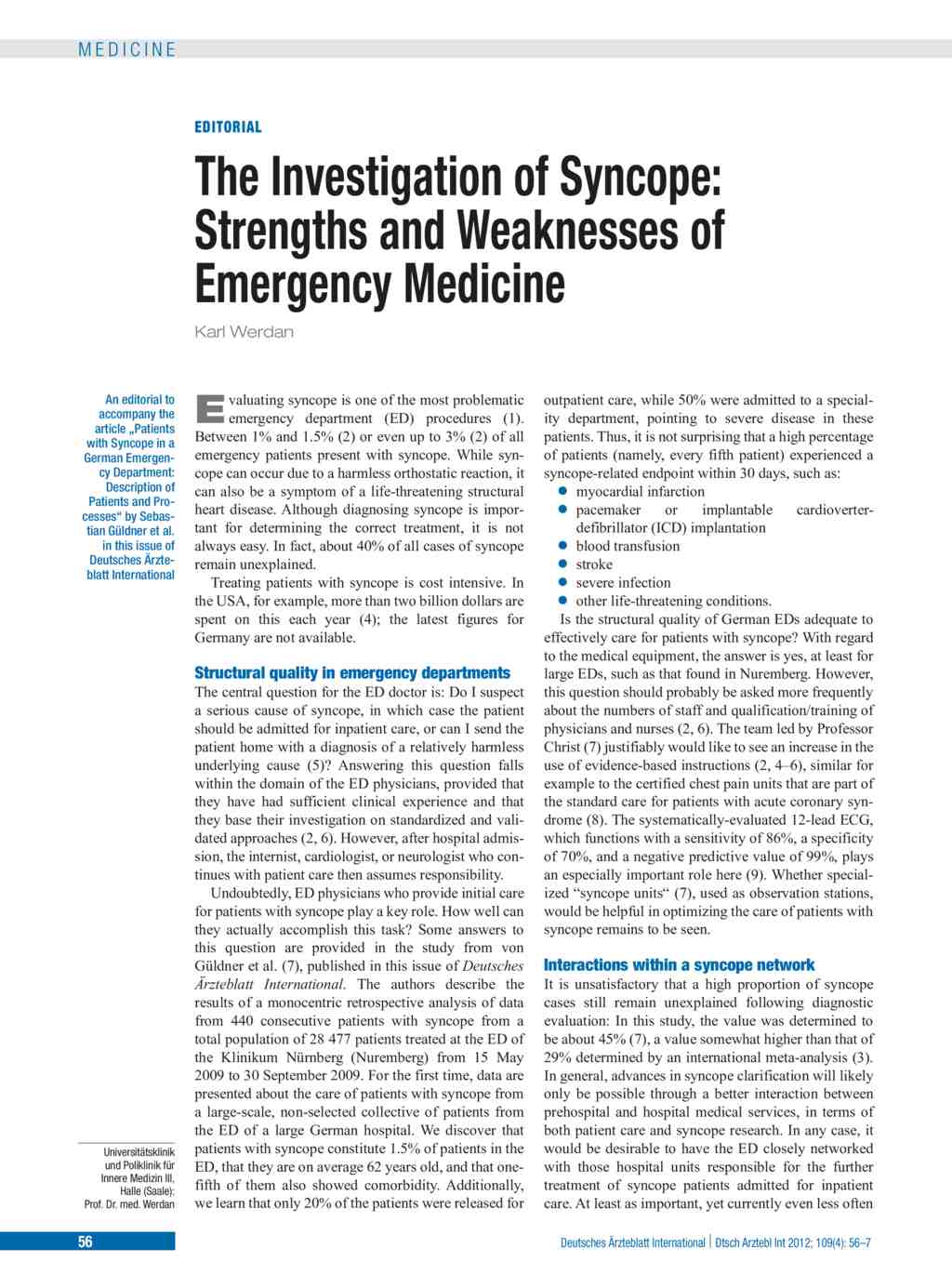