Freedom-restraining measures (FRM) are justified only when they are vital for the patient’s welfare, after all other options have been exhausted. They are the last resort and therefore should be restricted to settings where they are absolutely essential. The more freedom-restraining they are, the stricter the standards that should be applied in the care of those affected. For this reason, shared medical responsibility is of enormous importance when defining the indication. Attentiveness on the part of the medical staff and nursing/caregiving staff is the only means by which to recognize and rule out health related and injury related risks. We therefore wholly support Endrikat’s sentiment.

Steinert rightly mentions the lack of precision in our reporting of the use of FRM in the psychiatric setting. In actual fact, restraints to prevent self harming and suicides are used in exceptional cases, but more often in patients at high risk of falls or those who display aggressive behavior. We thank our correspondent for his comments on the supplemental legal requirements for the use of FRM.

With regard to the correspondence by Köpke and Meyer we wish to point out that forensic medicine does not set out any scientific standards regarding our topic. Since all that has been published thus far are individual case reports, we cannot support our results by citing comparable literature.

The main focus of our study was to determine the prevalence of deaths after FRM in the area covered by the Institute of Forensic Medicine in Munich. Further to noting the causes of death we analyzed the respective causes for accidents by means of elaborate reconstructions. Our data can only serve as the basis for improvements in existing prevention strategies. Setting out scientific standards for nursing care exceeds the remit of the specialty that is forensic medicine.

With our discussion section we primarily aimed to raise awareness among medical personnel for the problems associated with FRM, as a form of violence against people in need of care, and to promote awareness about non-violent alternatives. As the extensive media reports have shown, we have even succeeded in creating awareness of the problem among the public. The alternative measures mentioned in our article have been tried and tested in clinical practice, but—as our correspondents correctly say—they have not been evaluated.

We are aware of the cited observational study, but it is restricted to nursing home residents in Hamburg. Nationwide comprehensive studies of the numbers of people put under restraint and of the type of restraints used are thus far lacking. For this reason we conducted a questionnaire survey study on the use of FRM in all homes for the elderly in Bavaria. Because of the high response rate we conducted more extensive surveys in 2009 and 2010. As far as the use of FRM is concerned, Bavaria has seen a re-think: in the past, one in four nursing home residents were restrained, whereas today, that proportion has fallen to “only” one in five, and the trend is downwards. The reasons include varied, targeted activities and the responsible cooperation of all involved parties. These “ambitious” activities have not been “evaluated,” but not everything that is effective is supported by evidence (1). We thank the correspondents for their constructive letters and the appreciative personal correspondence, which have underlined the topicality of our article. 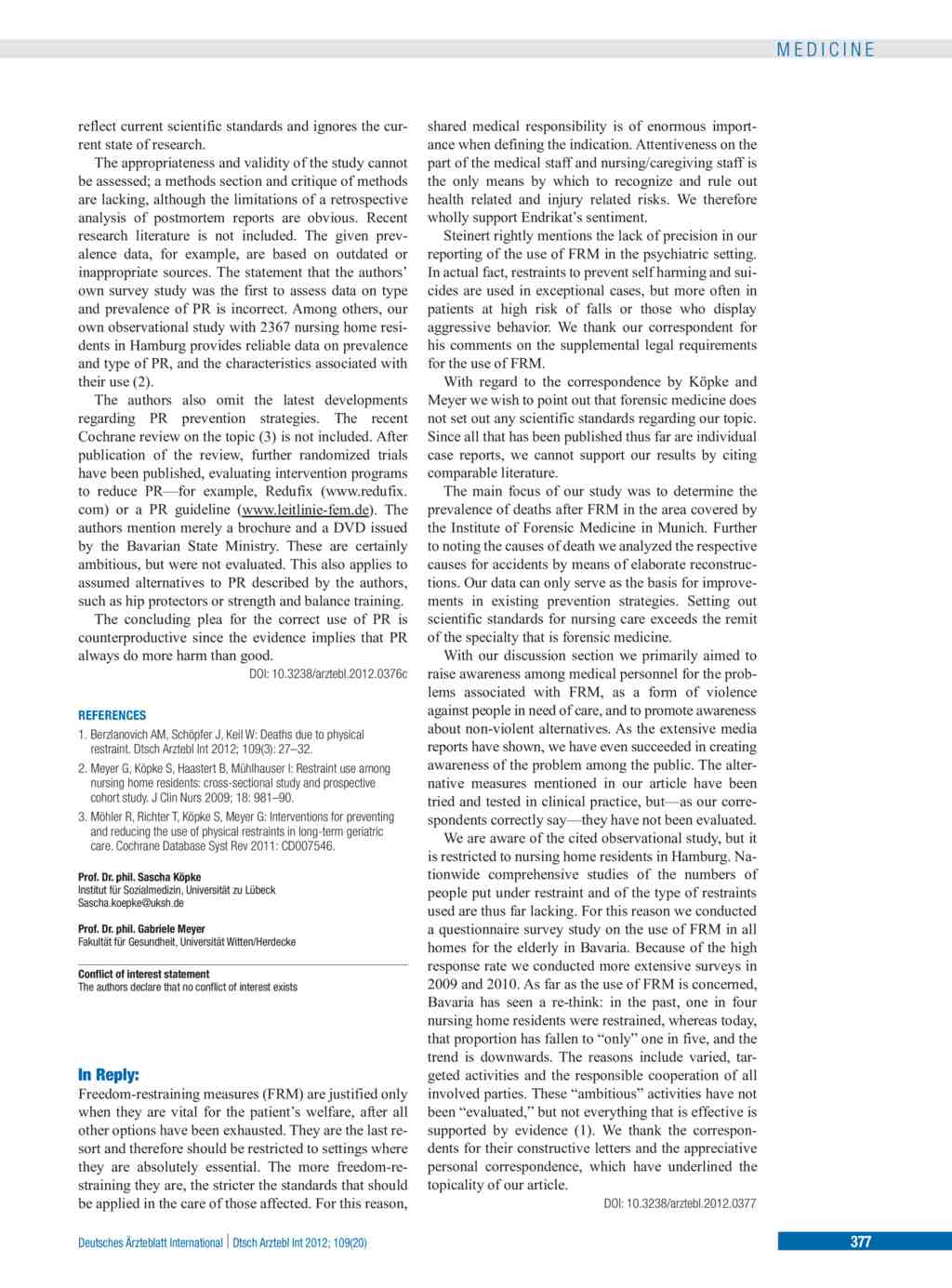