We thank your correspondents for the interesting comments, which we understand as an expression of the importance of the topic and unanswered questions.

Buchheim misses any mention of histamine intolerance as the cause of diarrhea in Box 5 and cites the article by Maintz et al (1). We focused on the main symptoms and the recommendation that specialized diagnostic evaluation should be carried out depending on the initial findings. In the article by Maintz et al, diarrhea is mentioned as one of many symptoms, without any indication of its prevalence. Furthermore, the authors said: “The diagnosis of histamine intolerance is made in the presence of at least two typical symptoms.” The approach if diarrhea is the lead symptom therefore differs from that for the symptoms of histamine intolerance that typically affect different organ systems.

Lache criticizes our mentioning rifaximine treatment. Our cautious assessment was phrased as follows: “Another therapeutic approach is to treat the enteric flora … with … rifaximine.” A controlled study which included a large number of cases has been published (2), which represents evidence of a quality that is not available for many commonly used treatments. We wish to correct the proportion of patients in whom therapy was successful: this was not 10% but 40.8%.

We mentioned plantago several times (see reference e25 and eTable 2) and mentioned wheat bran in the context of constipation only once. Peppermint oil is effective but has known side effects (a burning sensation in the esophagus and the anus), which impose limitations on its usefulness (3).

Rosler criticizes the lack of recommendations of adequate and appropriate stool diagnostics to confirm food intolerance and allergies. We have to confess that we were not aware of existing scientific studies of the topic.

With regard to histamine intolerance, we refer readers to our response to Buchheim.

In addition to these letters to the editor we have also received a considerable amount of direct feedback, which was targeted at one or several “controversial” questions. Our article was based as far as possible on the available scientific evidence. Undoubtedly this is limited, and many efforts will have to be made into find satisfactory answers to questions arising from clinical practice.

Conflict of interest statement
Professor Kruis acts as an adviser to Ardeypharm and Shire. He has received honoraria from Ardeypharm and Shire for preparing further educational scientific events. He has received honoraria from both companies for conducting commissioned clinical studies, as well as funding for a research project he himself initiated. 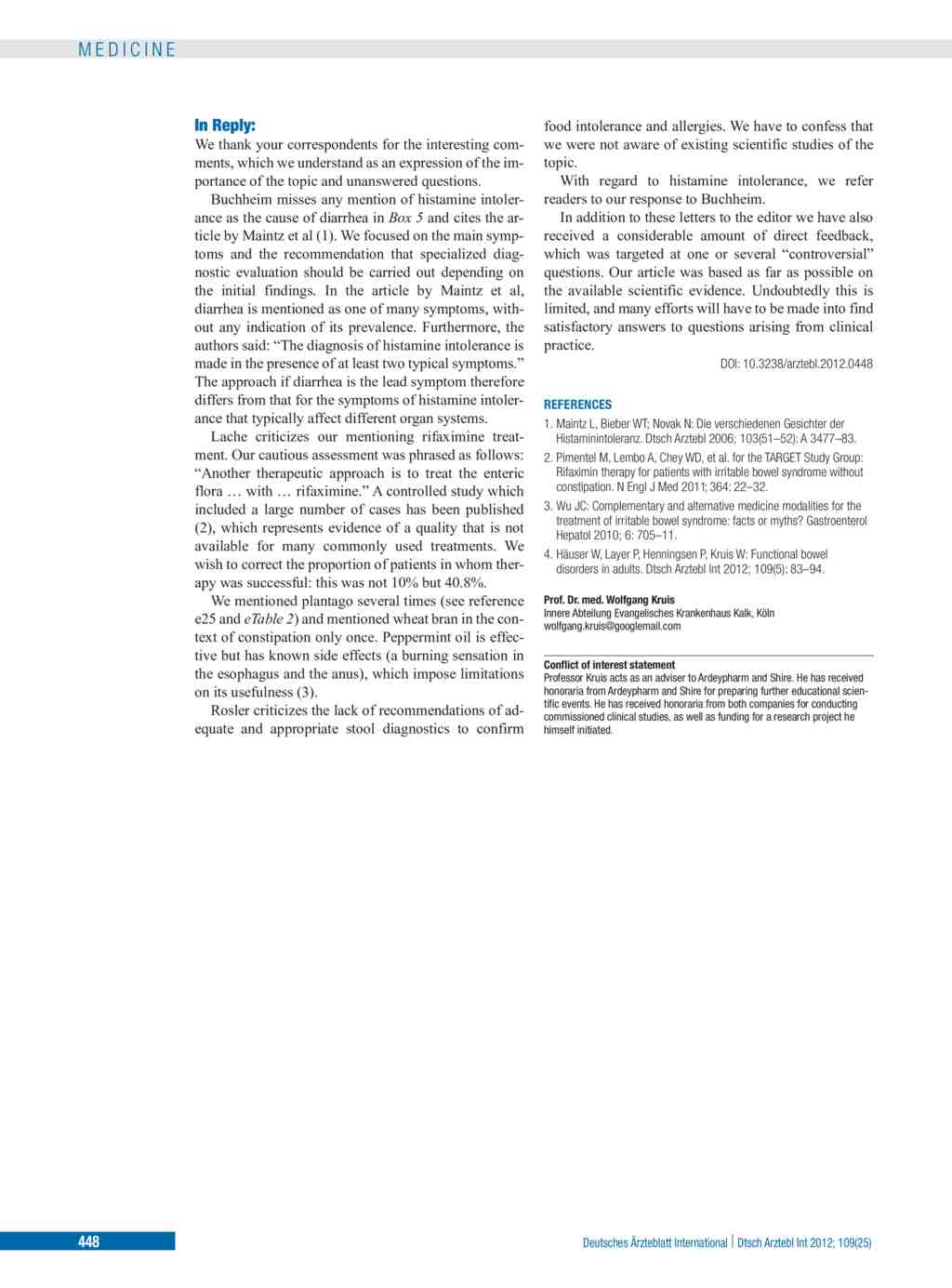