CT Angiography in the Diagnosis of Brain Death

The proof of irreversibility of clinically ascertained loss of brain functions is regulated in Germany by the Guidelines for the Determination of Brain Death (Richtlinien zur Feststellung des Hirntodes), established in 1997/98. The technical aids that may be used to this end include EEG, acoustic or somatosensory evoked potentials (AEP, SEP), and Doppler sonography. When comparing the results of these various supplementary procedures with one another and with a perfusion method that is not yet listed in the guidelines, it must be realized that they have different limitations and also differ in their availability. Furthermore, the findings depend on the timing of examination during the progressive dwindling of cerebral perfusion. The eventual complete cessation of perfusion may make the pathogenesis and irreversibility of loss of brain function particularly evident, but does not render the determination of death based on neurological criteria even safer than it already is with other techniques that are included in the guidelines. In this light, the widespread description of (catheter) angiographic demonstration of absence of cerebral perfusion as the “gold standard” of brain death diagnosis is understandable but problematic, because it can easily be misunderstood with regard to the diagnostic certainty of the other procedures.

Some have objected that EEG, AEP, and SEP as supplementary examinations measure electrical phenomena only in certain parts of the brain. That is undoubtedly correct. It is equally true, however, that there is no known case of recovery when properly conducted neurophysiological investigations carried out after clinical determination of loss of brain function according to the guidelines have revealed no cerebral electrical activity. Accordingly, the guidelines state that the supplementary examinations “cannot alone prove the irreversible loss of brain function”.

Welschehold et al.'s single-center study of 71 patients in whom clinical loss of brain functions was determined according to the guidelines compares the results of the supplementary procedures used to demonstrate irreversibility with those of subsequent CT angiography. Although the sequence of the neurophysiological investigations and the precise timing of Doppler sonography are not clear, the known limitations of the various supplementary examinations were confirmed and no new concerns were raised with regard to their role in the demonstration and documentation of the irreversibility of functional deficits.

For good reasons, the authors obtained ethics committee approval and the relatives’ consent before carrying out CT angiography. The compelling evidence corresponds to previously published findings. The painstakingly researched literature is discussed critically and presented clearly in a table. Taking everything into consideration—the literature, the timing of CT angiography, individual circumstances such as craniotomy defects and residual perfusion on Doppler sonography—the results are not surprising: in 67 of 71 patients, the first CT angiography showed absence of cerebral perfusion, thus confirming the irreversibility of the clinical deficits. The authors’ definition of absence of perfusion is more precise and more stringent than in some previous studies. Their group of 71 patients is larger than in all but one of the eight publications summarized in their table. Should the guidelines be updated, CT angiography can by all means be discussed as a procedure for demonstrating the irreversibility of clinically established loss of brain function. 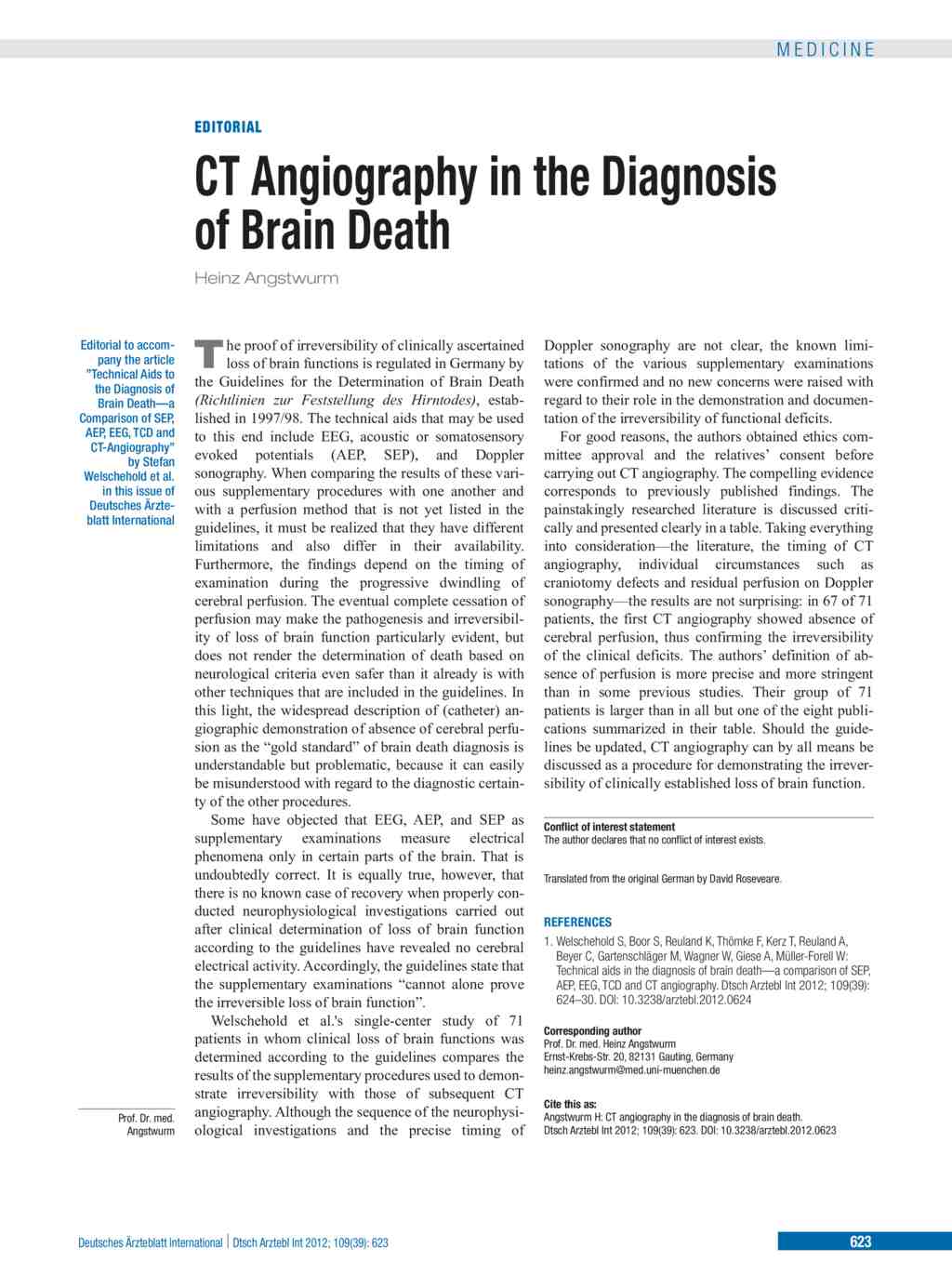