Part 20 of a Series on Evaluation of Scientific Publications

Background: An increasing number of clinical trials are being performed to show the absence of relevant differences between the effects of two treatments. The primary care physician makes use of the results of so-called equivalence studies, at least indirectly, practically every day. Equally important are active control clinical trials in which the efficacy of a new treatment has to be proven through demonstrating non-inferiority as compared to a standard treatment.

Methods: Explanation of basic principles and statistical techniques with reference to the original literature; selective searches in the medical literature.

Results: First of all, a suitable distributional parameter must be chosen that can be considered a reasonable measure of dissimilarity of the population effects of the treatments under comparison. The simplest approach to the statistical demonstration of equivalence or non-inferiority is to calculate confidence intervals for that parameter. To keep the required number of subjects for equivalence and non-inferiority studies as low as possible, statistical tests should be used which are optimized with respect to power.

Conclusion: Data from equivalence and non-inferiority studies need to be assessed for statistical significance no less than data that are generated to show that two treatments have different effects. A negative result in a traditional two-sided test does not suffice for statistically proving equivalence.

In a classical randomized controlled trial (RCT) the investigator evaluates the differences between two treatments (or between a treatment and a placebo) (1), with the aim of demonstrating that some new treatment option is superior to the existing standard. In dealing with diseases for which adequate treatment options are already available, it is is often the case that a new drug is developed that costs less than the medication currently being used for the respective indication, or has fewer adverse effects. In this case the aim is to establish the hypothesis that the efficacy of the new drug, compared to existing reference medications, is essentially similar (equivalence) or only marginally lower (non-inferiority). An example of the latter type of study is the CATT trial (Lucentis versus Avastin [2]), which received wide attention in the lay press (3) owing to the high prevalence of the disease concerned (age-related macular degeneration) and the exorbitant costs of the drug demonstrated to be non-inferior (at least € 1 billion annually if used in all eligible patients in Germany alone).

By definition, an equivalence study is conducted to demonstrate that there are no relevant differences in efficacy between two (or more) treatments. Before such studies can be planned and analyzed, the notion of equivalence has to be made precise, i.e., the investigators have to decide what amount of difference between the treatments can be tolerated as clinically irrelevant. The clinically relevant differences must be specified in the study protocol. To this end, a distributional parameter that accounts for these differences is selected. This may be, for example, the difference or the ratio of the expected values of the outcome variable. Furthermore, upper and lower limits are determined for the acceptable deviation from the value this parameter would take on in the case of identical efficacy of the treatments under comparison. The values of these “equivalence margins” are conventionally denoted by the symbols -ε1 and ε2, where ε1 and ε2 are positive numbers. The clinical research question, the selected clinical endpoint, and the form of the distributions to be compared have to be taken into account when setting ε1 and ε2. If, for example, a study is being carried out to demonstrate the equivalence of two antihypertensive agents in reducing diastolic blood pressure after 4 weeks’ treatment and the difference μ1–μ2 in mean reduction of the diastolic value attained in the populations is selected as the target parameter, ε1 = ε2 = 5 mm Hg is a sensible choice of equivalence margins.

In a non-inferiority trial, the aim is to show that the new treatment is not relevantly worse than the reference treatment. What constitutes relevant inferiority is defined by a lower limit −ε (e.g., –5.0 mm Hg for mean reduction in blood pressure) below which the parameter chosen to measure the difference in efficacy between the treatments should not fall.

The importance of equivalence and non-inferiority studies for clinical research has increased steadily over the past 20 years, as can be seen from the number of PubMed hits for the search terms “bioequivalence,” “(non)inferiority study (trial),” and “equivalence study (trial)” over the years 1991–2011 (Figure 1). Another indicator for this development is the proportion of drugs approved for the market on the basis of equivalence trials. According to an extrapolation from data in drug reports published by the US Food and Drug Administration (FDA) (4, section 1.4), this proportion was as high as 78% in 2008 (Figure 1).

Figure 1
Frequency of equivalence trials: results of a literature search
Enlarge All figures

Inadmissibility of the “naive” approach to testing for equivalence

Testing for equivalence requires statistical procedures other than those used in the classical situation where the aim is to demonstrate superiority. A conventional two-sided test (5) the wrong choice. Actually, it is inadmissible to conclude that the alternative hypothesis of equivalence of the treatments has been proved when such a test yields a negative, i.e. non-significant, result. The type I error in this situation consists of declaring the treatment effects to be similar despite the existence of relevant differences. In the conventional test, the risk of a type I error may amount up to 95%. In other words, a non-significant difference should not be mistaken for significant agreement of treatment effects. A less precise but frequently quoted way of expressing the same fact is: “Absence of evidence is not evidence of absence” (6).

The principle of confidence interval inclusion

Statistically correct confirmatory evaluation of equivalence studies can be done on the basis of confidence intervals. The basic idea behind this approach is remarkably simple and was first proposed in the context of bioequivalence testing (7):

From the data under analysis, one calculates a lower confidence limit Cl and an upper confidence limit Cu for the chosen parameter and compares them with the predefined theoretical equivalence margins -ε1 and ε2. If the confidence interval with the limits (Cl, Cu) turns out to be completely included in the theoretical range, one decides in favor of the hypothesis of equivalence. This is the case whenever both the value of Cl is larger than -ε1 and that of Cu does not exceed ε2. Otherwise, the null hypothesis of non-equivalence has to accepted. When applying this rule (Box 1a), one must be aware of the following fact: To ensure that the test of equivalence maintains a significance level of 5%, it is not sufficient for the confidence interval to have a two-sided confidence level of 90% (8). Rather, each of the two confidence limits Cl and Cu must have a one-sided confidence level of 95%.

When testing not for equivalence but only for non-inferiority, one needs only the lower confidence limit. Relying on the interval inclusion principle, the testing procedure is as follows: Non-inferiority is declared statistically confirmed if Cl exceeds the lower equivalence margin specified under the hypothesis (Box 1b, Figure 2).

Optimal tests for equivalence and non-inferiority

Tests that are based on the interval inclusion principle control the type I error risk, but are not optimal with regard to power (10) and therefore require larger samples than would ideally be the case.

The statistical literature contains a number of optimal tests for equivalence and non-inferiority hypotheses that cover a large range of situations differing with respect to study design and the nature of the outcome variable (4). The practical implementation of such optimal tests is considerably more complicated than for conventional one- or two-sided tests of significance and requires special algorithms. However, the software is not difficult to use.

A scenario very frequently arising in clinical trials is comparison of two binomial distributions. The optimal procedure for testing for non-inferiority in that setting is presented in Box 2, together with an illustrating example.

Some basic criteria for the assessment of publications on equivalence and non-inferiority studies are listed in Box 3. The Table presents the findings of a review of these criteria in articles published in the five leading general medical journals between 2000 and 2011. We found that the error of inferring statistically confirmed equivalence from a non-significant difference is no longer a serious issue in these high-ranking journals. The picture was much less favorable for studies involving tests for two-sided equivalence, where confidence interval inclusion, rather than optimal tests, were used throughout. Moreover, the two-sided confidence level was set at 95%, which means that these confidence interval inclusion tests were carried out in an unnecessarily conservative version (Box 3, Table).

Nowadays tests for the confirmatory statistical analysis of equivalence and non-inferiority studies are part of the standard repertoire of medical biometry. In terms of the frequency with which the respective type of study is performed, still the most important field of application for these procedures is the assessment of the bioequivalence of different formulations of the same drug. The methodological peculiarities of bioequivalence studies, which form the basis for market approval of generic drugs, cannot be described in detail in this brief review. (Comprehensive expositions can be found in Chap. 10 of [4] and in [12–15]). The testing procedure recommended in the guidelines of the regulatory authorities for bioequivalence studies (see [16]), is the one presented in Box 1a, for establishing equivalence of two normal distributions with regard to the difference between the non-standardized mean values. This test has to be performed with the (logarithmically transformed) ratios of the measurements from both periods of a crossover trial (17).

Advanced-phase clinical trials are also increasingly being carried out with the aim of demonstrating equivalence or non-inferiority. The majority of these studies are RCTs (1) using an active (positive) control, which means that instead of placebo the participants in the control group receive an established, effective treatment. A major difference from bioequivalence trials is that the endpoint criterion is the response of patients with a real indication for the treatment, not a pharmacokinetic parameter measured in healthy probands. With regard to statistical analysis, the main fact distinguishing studies to demonstrate therapeutic equivalence from bioequivalence trials is that the test of equivalence is often carried out with variables whose distribution is not of the continuous type (and thus not normal) or with data which is subject to censoring. In active control studies, one very often has to perform comparisons between response rates (i.e., binomial proportions) or Kaplan–Meier survival curves. Suitable tests for equivalence and non-inferiority for all these situations can be found in the literature. Currently, most active control trials are planned and evaluated on the basis of non-inferiority tests (18). From the point of view of statistical theory, there are no compelling reasons for this preference. Rather, it is motivated by the fact that given the same lower margin of equivalence and the same desired power, considerably higher sample sizes are needed to establish equivalence in the strict sense, than are required to demonstrate non-inferiority. This difference is easy to explain: a positive result of the test permits a much more precise conclusion in a trial demonstrating equivalence than in one establishing non-inferiority.

Generally, in evaluating a clinical trial from a statistical point of view, it is important to take into account whether it is a study of the classical type or one conducted with the aim of establishing equivalence or non-inferiority. Different types of trials require different procedures for statistical analysis. Tests of equivalence and non-inferiority have been developed to a high level and are widely known, but are not always applied properly with regard to interpreting the results or checking the assumptions made at the outset. The minimum requirements for publications reporting the results of equivalence or non-inferiority trials were published some years ago in an addendum to the CONSORT Statement (18). 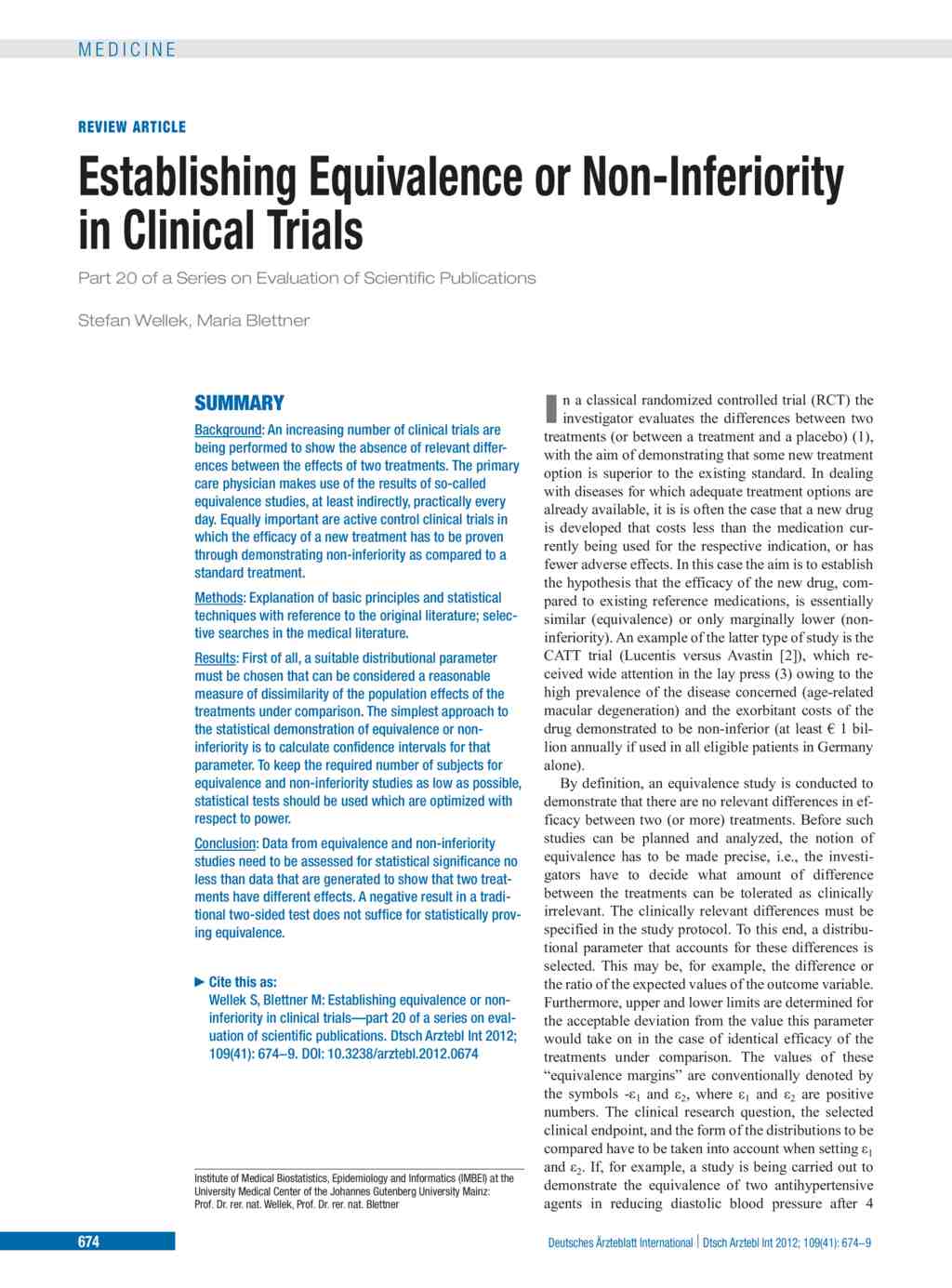