“Almost healthy patients” undergo myocardial biopsy only in exceptions and for good reasons. This is done in full awareness of the facts that these disorders often progress without characteristic clinical symptoms and myocardial function remains intact, and it is impossible to decide clinically whether a viral-infectious component has already resolved or persists at a low level and will cause cardiac damage in the long term. Because often in the early stages, pump function impairment may occur that lasts only a few days and is rapidly reversible (30%) and a proportion of these patients then develop cardiomyopathy after a “problem free interval,” unrestricted cardiac function should not constitute a reason for not undertaking a targeted diagnostic evaluation with a view to gauging potential treatment options.

For myocarditis, mortality rates of 25–56% have been described. Without a biopsy, targeted, causal treatment is impossible. The poorer disease course of untreated patients in the TIMIC study and the more than 50% 5-year mortality associated with untreated enteroadenoviral cardiomyopathies after 10 years (1) prove the necessity for early myocardial biopsy at a time when the myocardium has developed only minimal damage. It goes without saying that the indication for this has to be made for a good reason.

In large centers with experienced examiners, the complication rates associated with myocardial biopsy are lower than in other diagnostic or interventional catheter examinations. Deaths are rare; we have not seen any in the more than 8000 patients examined in our hospital (>50 000 biopsies) (2). Other large centers have reported similar rates. Data from smaller or older investigations series cannot be used as a gold standard, owing to the advanced catheter techniques available today (2).

It is certainly correct that other causes, such as myocardial involvement in systemic and immunological-rheumatic disorders, need to be considered in the diagnosis of myocarditis (when defining an indication for myocardial biopsy) and in the treatment, because these would change the treatment regimen accordingly, as the author correctly stated. If the history or clinical presentation provides relevant pointers, the diagnostic evaluation should be done before defining an indication for myocardial biopsy and should include colleagues from other medical specialties. Other cardiopulmonary disorders are excluded before the suspected diagnosis of myocarditis. The argument regarding cortisone equivalence dosages is justified, although in many therapeutic studies, different dosages of prednisolone or methylprednisolone were given without any difference to the result. In the TIMIC study, patients were initially treated with 1 mg prednisolone. Mesalazine can trigger myocarditis, as can a multitude of other medications not mentioned for reasons of space. We mentioned vaccinations in Table 1.

Conflict of interest statement
The authors declare that no conflict of interest exists. The research projects that the review article is based on were grant funded by the German Research Foundation (SFB-TR19), “Inflammatory cardiomyopathy.” 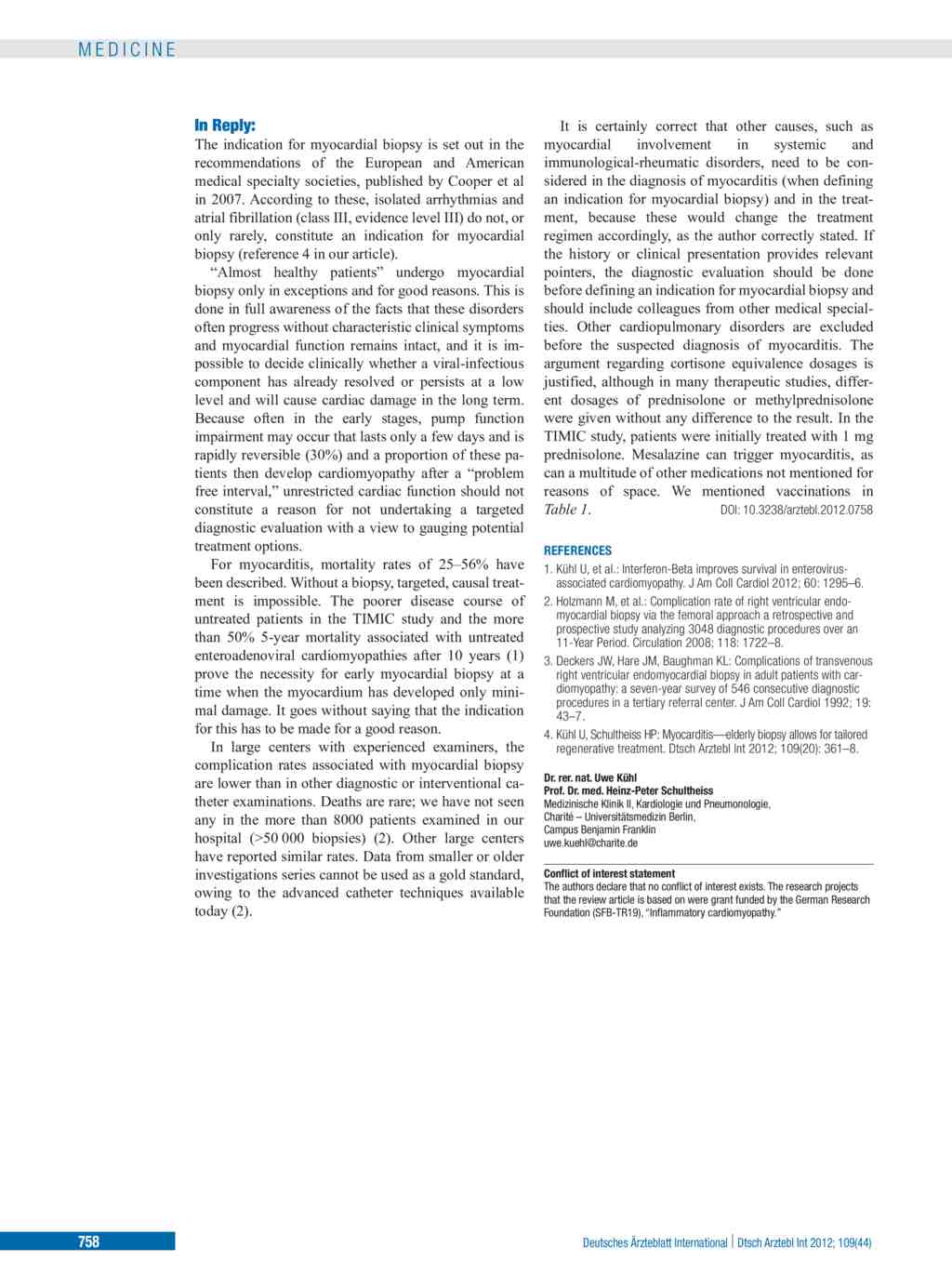