The question to which extent liver biopsy is allowed in a setting of changed coagulation, reduced platelet count, and medication for platelet aggregation inhibition, cannot be answered in a scientifically based way because almost no studies exist of this clinically relevant situation. The consensus recommendation of a Quick value of over 50% and a thrombocyte count of over 50 is consistent with general guidance but has not been sufficiently validated for liver biopsy. The Quick value in particular is likely to have a much less important role than is assumed in current clinical practice. Especially in hepatic disorders the synthesis is reduced not only in the pro-coagulation factors but also in the anti-coagulation factors, so that plasmatic coagulation is barely changed and in some cases even activated (3).

The platelet count and function seems more important in context of the problem of the post-interventional risk of hemorrhage (1, 2). It has therefore become common practice to stop ASS and other platelet aggregation inhibitors five days before the procedure, but the risk of a break in medication has to be weighed up against the risk of post-interventional hemorrhage. Biopsy should not be conducted in dual platelet aggregation inhibition. If a patient cannot stop taking platelet aggregation inhibitors we recommend obtaining a liver specimen by the transjugular route or via mini-laparoscopy, while giving thrombocyte replacement and possibly fresh frozen plasma or coagulants. This is also our method of choice if plasma coagulation is poor and in pronounced thrombopenia. Serious hemorrhages occur almost exclusively in patients with several risk factors.

The comments regarding the subject of hepatic nodules underline the importance of interdisciplinary cooperation in the clinical management of hepatic nodules. Independent of the tumor histology, liver biopsy can of course be dispensed with altogether if surgical intervention is undertaken anyway. We wish to emphasize once again the importance of discussion within an interdisciplinary tumor board, which should include colleagues from all relevant specialties. This problem will increase in importance in the future because the updated guidelines for colorectal cancer stipulates tumor board discussions of hepatic metastases of colorectal cancers, for example, which involve a surgeon with experience of liver disorders (4). A “biopsy algorithm” will be an essential part of the S3 guideline on hepatocellular carcinoma, which is currently going through the consensus process. We agree with the authors that a decision needs to be made on a case-by-case basis as to whether invasive diagnostic evaluation can be dispensed with, even though blood based biomarkers and tumor markers may be used. However, a paradigm shift has occurred in the diagnosis of hepatocellular cancer, and raised alpha-fetoprotein (AFP) is not included any longer in the diagnostic algorithm and biopsy algorithm (5). The degree of differentiation of a malignant tumor (the so-called grading), as mentioned in one of the letters, is unlikely to have any effect on the development of possible puncture track metastases—but systematic, valid studies in this setting are lacking.

In conclusion we wish to underline once more our correspondents’ recommendations—a whole range of complications after liver biopsy can be avoided by using direct visualizing methods, such as (mini-)laparoscopy.

Professor Lohse has received honoraria for speaking from Falk-Foundation, MSD, and Roche. He has received third-party funding from Boehringer Ingelheim and Roche, among others.

Professor Dienes declares that no conflict of interest exists. 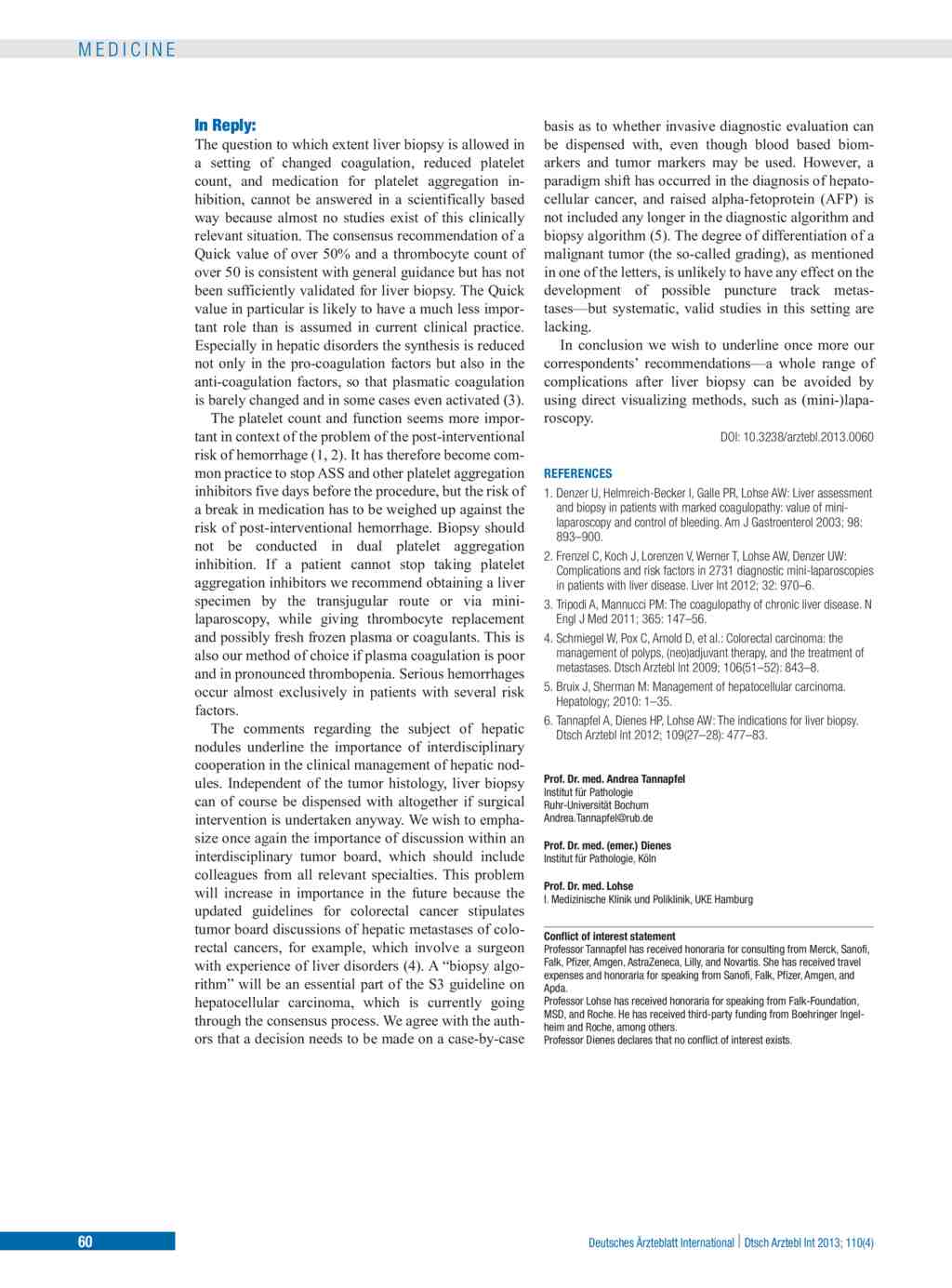