Dtsch Arztebl Int 2013; 110(6): 83-4. DOI: 10.3238/arztebl.2013.0083
Editorial on the series of articles on cirrhosis of the liver: Part 1: “The Etiology, Diagnosis, and Prevention of Liver Cirrhosis,” by Wiegand et al., in this issue of Deutsches Ärzteblatt International Part 2: “The Conservative and interventional treatment of the complications of liver cirrhosis,” by Sauerbruch et al., in issue 8/2013 Part 3: “Irreversible Liver Failure—Treatment by Transplantation,” by Pascher et al., in issue 10/2013

The different etiologies of cirrhosis

In the first article of the three-part series on cirrhosis now being published in this journal, Wiegand and Berg (1) discuss the various etiologies that can lead to cirrhosis. The more common ones are alcoholism and viral hepatitis (B, C, or D). Cirrhosis due to hepatitis B and D will decline in frequency because of the generalized vaccination of children against hepatitis B, which was introduced some years ago and is also effective against hepatitis D, and also because of improved treatment. On the other hand, cirrhosis due to hepatitis C is expected to become more common over the next two decades. In Germany, 20% of the population already has a fatty liver; 10% of these persons will develop non-alcoholic steatohepatitis (NASH). 10% of persons with NASH will develop cirrhosis; of these, in turn, 10% will develop hepatocellular carcinoma. As most liver transplantations are performed because of cirrhosis, a lower prevalence of cirrhosis would alleviate the organ shortage. One important task is thus to prevent cirrhosis by the early diagnosis of treatable liver disease. Nowadays, specific treatment can arrest the progression of many types of liver disease, or even cure them. Universal vaccination against hepatitis B and the early treatment of chronic hepatitis B and C are important components of the prevention of cirrhosis and hepatocellular carcinoma. Successful treatment prevents progression to cirrhosis. Persons in need of treatment must be identified; in the particular case of hepatitis B, this presents a major challenge. It is thought that more than half of all persons with hepatitis B in Germany are immigrants, and this group (especially women) has inadequate access to the health care system. Likewise, the appropriate treatment of alcoholism, autoimmune hepatitis, hemochromatosis, and Wilson disease is of great importance.

Pharmacological methods of intervening in the mechanisms of fibrogenesis and fibrolysis at the molecular level, independently of the etiology of disease, would be a highly desirable way of treating and perhaps reversing cirrhosis. Studies on the successful treatment of hepatitis C showed as far back as 2002 that cirrhosis is, in principle, reversible (2). This was recently demonstrated for the long-term treatment of hepatitis B with the modern oral nucleoside and nucleotide analogues entecavir and tenofovir (3). High hopes were raised for the many new treatments for hepatitis C with direct-acting antiviral agents (“DAA”). The new standard treatment for hepatitis C, i.e., triple therapy with pegylated interferon-alpha, ribavirin, and one of the new hepatitis C virus (HCV) protease inhibitors (4), has yielded disappointing results in the treatment of patients with cirrhosis. The main hope at present is that an interferon-free combination of DAA drugs will soon be developed for oral administration (5).

The treatment of complications of cirrhosis

In the second article of the series, Sauerbruch et al. (6) describe the conservative and interventional treatment options for complications of cirrhosis. Esophageal varices, the main cause of gastrointestinal hemorrhage due to cirrhosis, can now be treated or prevented with beta-blockers, endoscopic ligation, and/or a transjugular intrahepatic portosystemic shunt (TIPS). TIPS has also become an established treatment for otherwise intractable ascites. Hepatocellular carcinoma (HCC) remains a challenging problem: The only causally directed treatment for early-stage HCC is liver transplantation. Transplantation also removes cirrhotic liver tissue that might have served as the precancerous stage for a new development of HCC.

The allocation of transplanted organs

The shortage of donor organs has led to repeated changes in organ allocation methods with the twin goals of improving outcomes and making organ distribution fairer. Patients should receive organs on the basis of the urgency of their situation and the chances of therapeutic success, regardless of the particular center in which they happen to be treated. Eurotransplant has a single waiting list for liver transplantations. The last change, in 2006, brought about the introduction of the MELD allocation system (“Model for End-Stage Liver Disease”), in which the bilirubin and creatinine concentrations and the international normalized ratio (INR) are used to compute a MELD score. The higher the MELD score, the more urgent the indication. A patient with a MELD score of 40, for example, has a three-month mortality of nearly 100% without transplantation. The MELD score was introduced to give the sickest patients a higher priority on the waiting list and thereby lower mortality among waitlisted patients, which, indeed, is what happened, at least at first. Soon, however, the limitations of the MELD system became apparent, and special adjustments were introduced. One example concerns hepatocellular carcinoma: If patients receive liver transplants while still in an early stage of HCC (according to the MILAN criteria), the recurrence rate is low, and the prognosis is good. On the other hand, if HCC is more extensive, then transplantation is of little or no use, because the tumor recurs a short time afterward. The transplanted organ could have been used to help a patient with a different underlying illness achieve long-term survival. At present, patients with HCC are given special preference by the awarding of additional MELD points (“Match MELD”); this diminishes the pool of donor organs for all other patients, such as those with cirrhosis without HCC. Moreover, organ donors are now older on average than they used to be, partly because fewer people are being killed in road accidents (obviously a good thing in itself). Thus, increasingly suboptimal organs are being transplanted into increasingly sick patients, and the survival rate after liver transplantation has, in fact, declined since the MELD system was introduced (8, 9). Patients are now less likely to die before liver transplantation, but more likely to die afterward.

Conflict of interest statement
Prof. Manns has received consulting fees, payment for serving as an expert, lecture honoraria, and reimbursement of congress participation fees and travel costs from Novartis, GSK, Roche, Janssen, MSD, Schering-Plough, and Falk. His institution (MHH) has also received third-party research funding and support for an endowed chair from these companies as well as from Biotest and Cytonet. 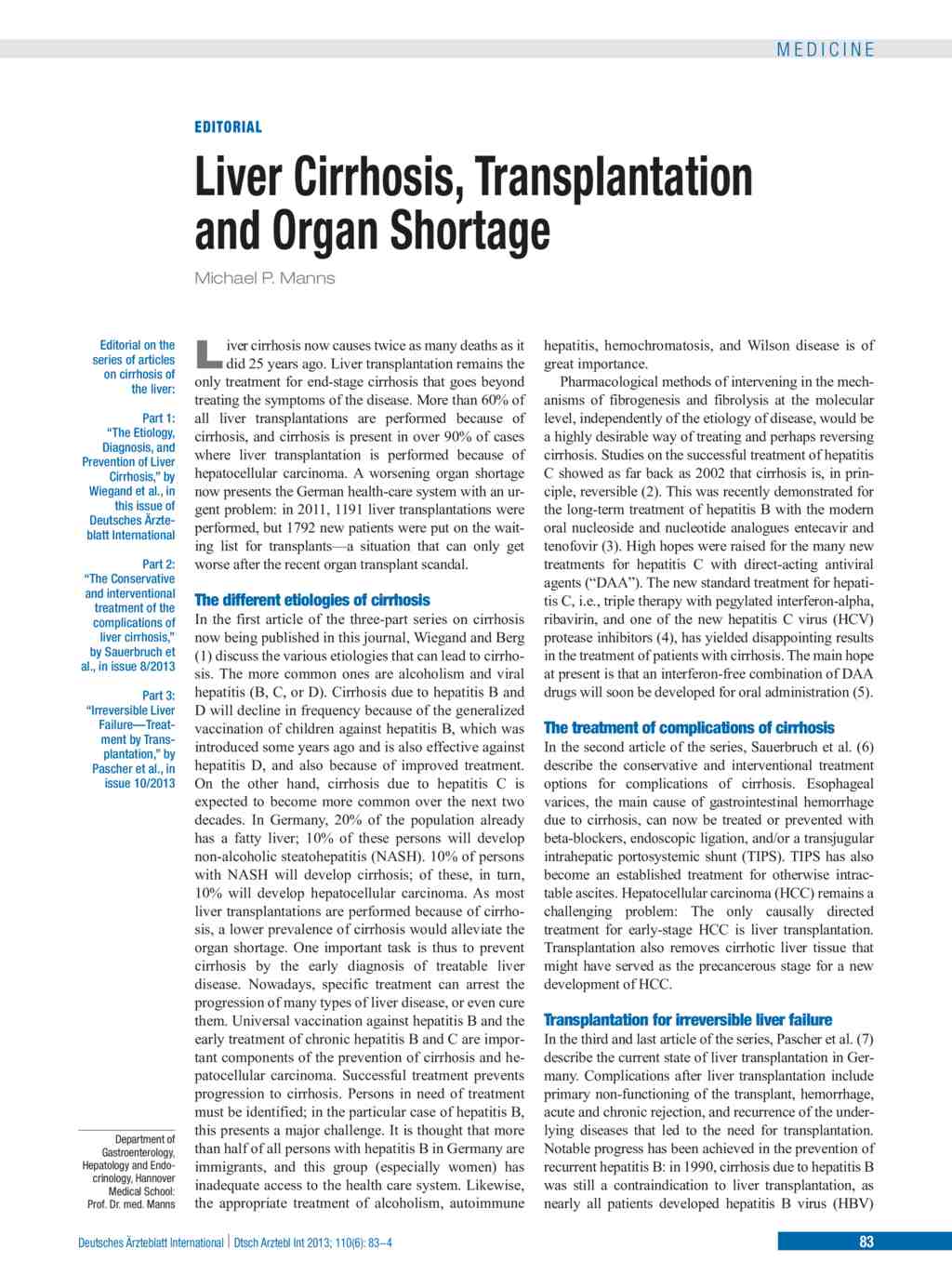