Background: Neurological rehabilitation after stroke lowers rates of death, dependency, and institutionalization. Little research has yet addressed the factors affecting the selection of ischemic stroke patients for rehabilitative treatment.

Method: The database for this study consisted of all cases of ischemic stroke (ICD-10 code I63) that occurred in 2010 and 2011 in the neurological inpatient care facilities participating in the “Stroke Register Northwest Germany” quality assurance project. A primary target group for rehabilitation was defined a priori (Barthel Index at discharge ≤ 65, no premorbid nursing dependency, no transfer to another acute-care hospital after initial treatment of stroke). Among these patients, factors potentially affecting the provision of rehabilitative treatment were studied with binary logistic regression and multilevel logistic regression.

Results: There were 96 955 cases of ischemic stroke in the 127 participating hospitals. 40.8% and 11.4% of these patients underwent neurological and geriatric rehabilitation, respectively. The primary target group for rehabilitation contained 14 486 patients, 14.9% of whom underwent no rehabilitation after their acute treatment. The chances of undergoing subsequent rehabilitation were higher for patients with paresis and dysarthria on admission. Female sex, older age, impaired consciousness at admission, prior history of stroke, and lack of counseling by the hospital social services were all associated with a lower probability of undergoing rehabilitation.

Reviews of randomized controlled studies have shown that specialist neurological rehabilitation after stroke reduces subsequent risk of need for nursing care, admission to a care institution, and mortality (1–4). Factors that have been proven to be important for successful rehabilitation include starting early, and frequent, intensive training of specific motor, cognitive, and sensory functions (1, 4). The best evidence exists for the effectiveness of inpatient rehabilitation measures (3, 5). However, systematic reviews also support the positive effects of measures provided on an outpatient or partly inpatient basis (2, 4, 6).

Treatment guidelines for neurological rehabilitation take these results into account, recommending that rehabilitation by an organized specialist, interdisciplinary team should start as soon as possible after acute cerebral insult (7, 8). Exclusion criteria for some patients that have been discussed in the literature include medical factors that could militate against intensive (early) rehabilitation care that is primarily geared to neurological symptoms. Factors that have been discussed include:

With regard to multi-morbidity, very aged patients are often referred for geriatric rehabilitation care, where there is a particular focus on the treatment of concomitant disease (12).

Neurological rehabilitation in Germany is divided into phases A to F (10); the phases relevant to the immediately post-acute period are phases B to D. In phase B, patients with severe neurological impairments are treated with intensive care interventions available. Patients who do not require intensive care and are able to cooperate with treatment to some extent are admitted to phase C, while phase D (“follow-on curative treatment”) is aimed at patients with little need for care who can manage basic activities of daily living for themselves (11, 13, 14).

Few data are available for Germany as to how in practice patients are selected for rehabilitation care. Cost bearers are guided by, among other things, function scores such as the Barthel Index (BI) or Early Rehabilitation Barthel Index (ERBI) as well as the assessment of the hospital providing acute care (9, 15). In the German sample in the CERISE studies (Collaborative Evaluation in Rehabilitation of Stroke across Europe), the following parameters reduced the probability of inpatient neurological rehabilitation care (15):

In addition, affiliations between the care facilities involved and sometimes the negotiation skills of the patient and his or her relatives had an influence on admission to inpatient neurological rehabilitation care. So far, however, it is unclear what proportion of patients in Germany who are in need of neurological or geriatric rehabilitation actually receive this, and what other factors play a role.

The aim of the present analysis was to investigate what clinical and sociodemographic patient characteristics contribute to stroke patients for whom rehabilitation is indicated actually receiving rehabilitation treatment when they leave acute inpatient neurological care.

The quality assurance project ”Stroke Register Northwest Germany” (http://campus.uni-muenster.de/qsnwd_projekt.html) is a collaboration between the Institute of Epidemiology and Social Medicine at the University of Münster and acute care facilities (16, 17). Data are collected on anonymized forms on paper or electronically. In addition to sociodemographic information, details of symptoms, diagnostic procedures, treatment, and complications are recorded. Subsequent rehabilitation following treatment on the acute ward is also documented, including specification of which phase, are also documented. Additional questions relate to the infrastructure at the care facility.

All patients who took part in neurological (phases B to D), geriatric, or other rehabilitation treatment were defined as receiving rehabilitation care.

The primary target group for rehabilitation in this analysis was defined by three criteria:

The study included all ischemic stroke patients (ICD-10 code I63) aged 18 and over who were recorded in the neurological facilities collaborating in the quality assurance project during 2010 and 2011. To describe the study population, frequencies, medians, and interquartile ranges were calculated. Differences between subgroups were analyzed using the chi-square test and U test. In addition, using multivariate regression models (binary logistic regression, multilevel logistic regression), we investigated in the target rehabilitation group (defined a priori) which patient characteristics and structural features of the acute treatment facilities (hereafter: facilities) influenced whether patients received rehabilitation care. The methods are described in detail in the eMethods section.

The dataset from 2010 and 2011 was made up of 96 955 cases from 127 neurological centers. The median number of cases per facility in 2011 was 388 (interquartile range: 272 to 546). A quarter of the facilities (n = 34) had their own early rehabilitation department. Depending on the facility, between 20.6% and 100% of patients learned about the support available from social services or care services.

Table 1
Characteristics of stroke patients (age ≥ 18 years) at neurological treatment facilities for whom rehabilitation data were available (n = 96 955), stratified as recipients versus nonrecipients of rehabilitation care
Enlarge All figures

In all, 14.9% (n = 14 486) of all patients fulfilled the criteria for the previously defined primary target group for rehabilitation (BI at discharge ≤ 65, lived independently at home before the stroke, not referred for further acute treatment). Around one in every two patients in this group (55.0%, n = 7971) was intended for phase B and C rehabilitation measures.

Tables 2 and 3 show the estimated effects from the regression analyses in the form of adjusted odds ratios (aOR) together with the related 95% confidence intervals (95% CI). The results of the simple binary logistic regression (Table 2) were very similar to those of multilevel logistic regression (Table 3), and therefore only the results of the more detailed multilevel model will be described, which contain facility infrastructure characteristics in addition to patient characteristics.

The reasons why rehabilitation care is not given need to be critically examined, not least against the background of the right, enshrined in German social legislation, to rehabilitation treatment to prevent disability and the need for care. Within the primary target group for rehabilitation, more advanced age, a previous cerebral insult, and disturbed consciousness on admission were associated with a markedly reduced chance of receiving rehabilitation. Female sex was also associated with a lower probability of rehabilitation. Although a large functional deficit and pre-existing lesions are factors that worsen the prospects of successful neurological rehabilitation (1, 12), studies have shown that age alone is not an impediment to successful rehabilitation (12, 18–20). Despite this, other studies have also shown age to have an influence on the provision of care to stroke patients (21, 22). In relation to sex, likewise, several international studies have shown differences between men and women in stroke care, with women tending to receive poorer care (23, 24). Possible explanations include high (multi-) morbidity in female stroke patients (24), which may work against certain forms of therapy, and poorer social support (owing to the shorter life expectancy of their male partners), which can play an important part in their being accepted into rehabilitation care (15).

Neurological deficits that are treated within rehabilitation care programs, e.g., pareses or speech impairment, were associated with a higher chance of receiving rehabilitation care. Interestingly, the same was not true for the presence of aphasia, which was negatively associated with receiving rehabilitation care. One explanation of this could be that—despite the adjustment for co-morbidities and neurological deficits—patients with aphasia showed greater impairments, which could have put the success of rehabilitation in doubt. Another possible explanation could be that patients with aphasia, with their impaired language comprehension, cannot properly express their desire for rehabilitation. In a system in which negotiation skills play a part (15), such a factor could be significant.

This possible explanation is supported by the finding that lack of information from social services about the various kinds of support on offer is also associated with a markedly lower chance of rehabilitation. Information and counseling from social services could be an indicator of a facility’s commitment to after-care or a proxy variable for good quality of process. There were clear differences between centers in this regard. Other factors that were not recorded, such as rare comorbidities representing medical contraindications, or the patient’s wish not to undergo rehabilitation, might have had a strong influence on whether a patient received rehabilitation care or not. For this reason, we interpret the percentage of patients from the primary target group who did receive rehabilitation as relatively high.

In the international comparison with other Western industrialized countries, Germany also seems to come off quite positively in terms of rehabilitation care. Direct comparison between countries is possible only to a limited extent, because of the large differences that exist in health care systems and health services structures; nevertheless, the present analysis seems to suggest that more patients receive specialist neurological rehabilitation in Germany than in countries such as Canada or New Zealand (25, 26). The CERISE studies and one other European comparative study demonstrated great heterogeneity between European countries in terms of the frequency and intensity of rehabilitation care, and of target parameters such as recovery of function or mortality. According to these studies, neurological rehabilitation in Germany is characterized by a high degree of structure, time efficiency, and comparatively high therapeutic intensity. At the same time, German stroke patients showed better recovery of function, markedly better gross motor function, and relatively low mortality after a year as compared to British patients (4, 21, 27, 28).

One strength of the present study is that the referral of stroke patients from acute inpatient neurological care to rehabilitation care was studied in a large, supraregional dataset. The analysis took into account both patient characteristics and some features of acute care facility infrastructure.

One limitation of the study is its definition of a primary target group for rehabilitation. Any definition of this kind must necessarily be arbitrary, since the limitations of routine records do not provide enough data for really appropriate selection of patients for rehabilitation care. The definition used in this study is based on transparent criteria aimed at identifying patients for whom, given the severity of impairments and their lack of need for care before the stroke event, rehabilitation care appeared to be definitely indicated. Because the criteria were deliberately narrow, they excluded patients with lesser impairments for whom rehabilitation care might also be indicated. Analyses based on the entire dataset, however, showed similar associations to those observed in the primary target group, so the main findings reported remain valid if the target group is widened.

One further limitation arises from how missing data are handled. An ad hoc procedure was employed, which could have led to distortions in the estimated associations (29). On the other hand, the proportion of missing data was low, so the extent of any distortions should be tolerable given the considerable size of the dataset.

The authors are grateful to the participating hospitals and treatment centers in the quality assurance project ”Stroke Register Northwest Germany” (see list in eBox) for excellent continuous collaboration during the data collection phase. 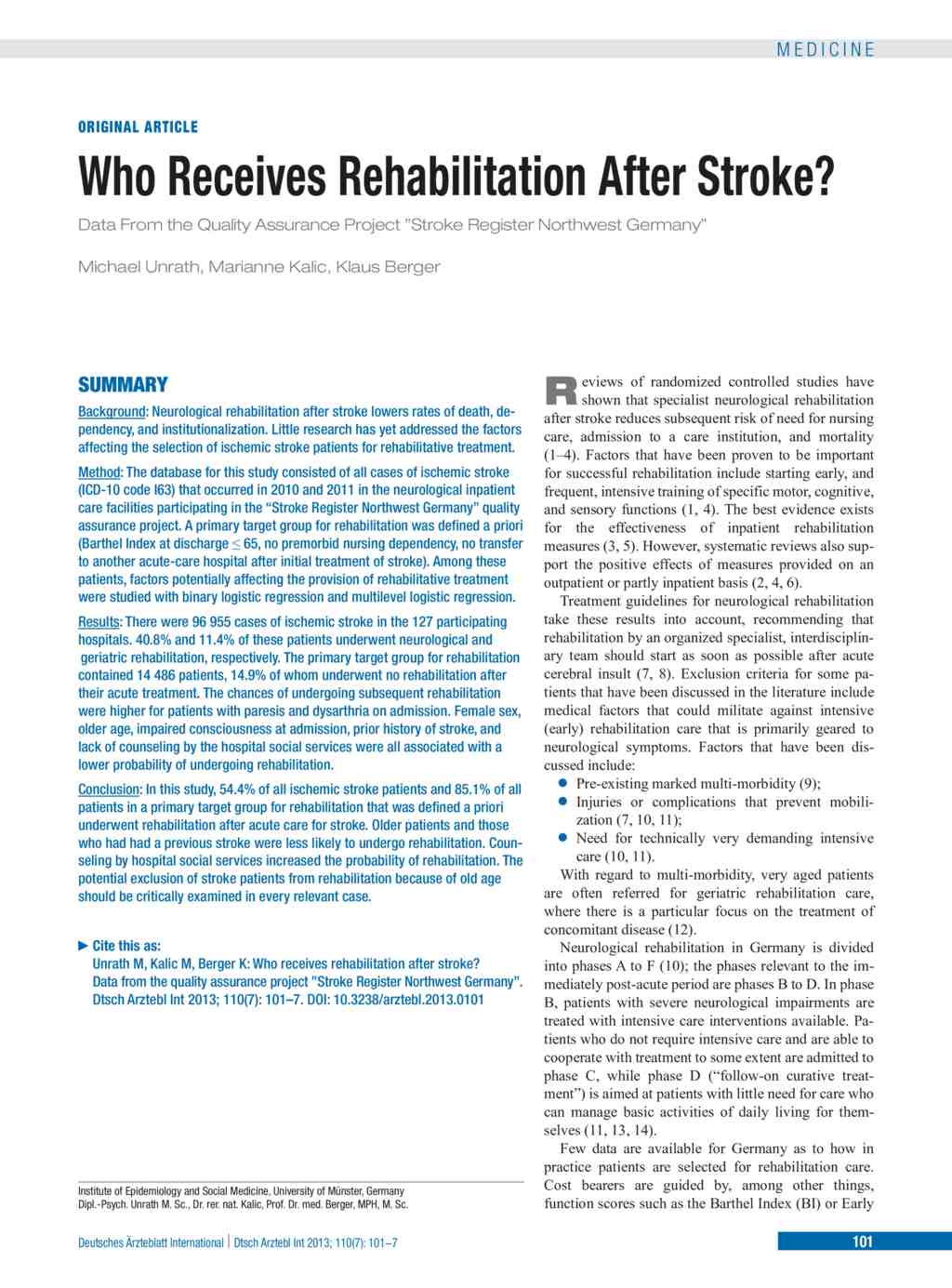