Wörz mentions the much-discussed association between cannabis use and cognitive impairments or the triggering of psychosis. A recently published cohort study that is regarded as the most reliable study of the effects of cannabis on brainpower to date confirmed earlier results: while study participants who developed cannabis dependency before the 18th birthday showed notable impairments to memory, concentration, and brainpower, adults did not show any such impairments, even if they were heavy users (1). It may be assumed that cannabis can damage the adolescent brain, but not—in contrast to alcohol—the adult brain. According to the available evidence, treatment of adult patients with cannabinoid medications can be classified as harmless in terms of developing cognitive deficits.

The assessment for the occurrence of psychosis is similar: regular consumption of cannabis evidently doubles the risk of psychosis only if this happens before the physiological growth of the brain is completed. In the meantime, numerous factors have become known that increase the probability of psychosis. Double the risk of the disorders exists in children who grew up in large cities, compared with children growing up in a rural environment (2). Before treating children and adolescents with cannabis medications, a careful risk-benefit analysis is required.

Wörz rightly emphasizes that all medical drugs can cause adverse effects and that they may not be effective in all patients. Experts share the view of the US Institute of Medicine, according to which “Marijuana is not a completely benign substance. It is a powerful drug with a variety of effects. However, except for the harms associated with smoking, the adverse effects of marijuana use are within the range of effects tolerated for other medications.” (3). Cannabinoids are currently used particularly for those indications where established treatments do not result in any improvement or cause unacceptable side effects.

Hagmann points out the harms that smoking causes to the respiratory tract. According to the current evidence, smoking cannabis does in fact cause less damage than smoking tobacco (4), but from a medical perspective patients should generally be advised against inhaling toxic combustion products. Since responsiveness to cannabinoids and the targeted plasma concentrations vary between individuals, measuring blood concentrations is neither necessary nor does it make sense. Relevant psychological side effects of cannabinoid medications are best avoided by gradual stepping up of the dosage and tailoring the dosage to the individual patient. Severe neurological side effects, such as Hagmann expresses concerns about, are immaterial in everyday clinical practice. For this reason, dosage adjustment in an in-patient setting is usually not required.

Professor Müller-Vahl has received conference delegate fees as well as travel and hotel expenses from Astra-Zeneca and Lundbeck. She has also received honoraria for conducting commissioned clinical studies, and funding for a research project she initiated, from Boehringer Ingelheim. She serves on the executive board of the Arbeitsgemeinschaft Cannabis als Medizin e. V. (ACM, Germany’s medical cannabis working group, reg assoc) and the International Association of Cannabinoid Medicines (IACM). 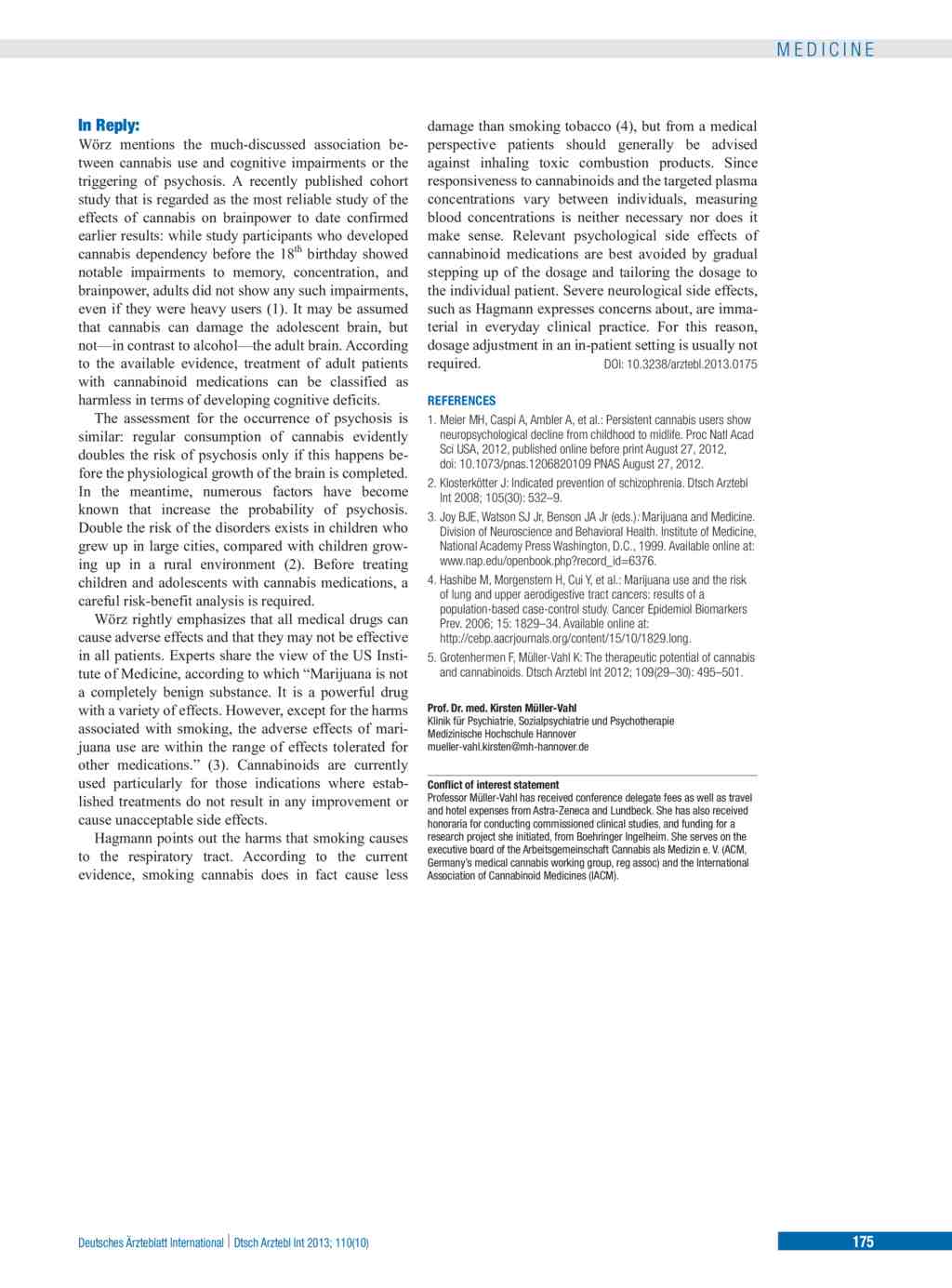