Early Orthogeriatric Treatment of Trauma in the Elderly

A Systematic Review and Metaanalysis

Background: More than 125 000 hip fractures occur in Germany every year, with a one-year mortality of about 25%. To improve treatment outcomes, models of cooperation between trauma surgery and geriatrics have been developed. Their benefit has not yet been unequivocally demonstrated.

Methods: We systematically searched the Medline database and the Cochrane Library for prospective randomized controlled trials in which the treatment of elderly patients with fractures by the trauma surgery service alone was compared with preoperatively initiated collaborative treatment by the trauma surgery and geriatric services (“orthogeriatric” treatment). We investigated three treatment outcome variables—length of hospital stay, in-hospital mortality, and one-year mortality—in a metaanalysis.

Results: The five trials of hip fracture treatment that met the selection criteria all had relatively small study populations and a high risk of bias. The outcomes with respect to hospital stay differed greatly among trials (I2: 88.5%), and geriatric intervention was not found to have any statistically significant effect (0.06 days, 95% confidence interval [CI]: –3.74 to 3.62 days). The relative risk of dying in the hospital was 0.66 for orthogeriatric treatment (95% CI: 0.28–1.55, p = 0.34), and the hazard ratio for one-year mortality was 0.79 in favor of orthogeriatric treatment (95% CI: 0.57 to 1.10, p = 0.17). A metaanalysis of functional outcomes was not possible.

As a result of demographic change, with the number of elderly persons in industrialized countries rising, the number of fractures in geriatric patients is also increasing.

Typical geriatric fractures are fractures of the proximal femur, the proximal humerus, the distal radius, vertebral bodies, and the pelvis, and increasingly also periprosthetic fractures (1). These fractures, which are associated with osteoporosis and falls, pose great challenges to treating physicians. On the one hand, altered bone structure complicates surgical care, and on the other comorbidities often lead to complications (2).

This systematic review and metaanalysis is intended to represent the current state of scientific knowledge on the possible benefit for patients with typical geriatric fractures of orthogeriatric care begun perioperatively.

The first stage in the compilation of this article was a systematic review of Medline and the Cochrane Library performed by two reviewers. Next, a metaanalysis of the various outcome parameters was performed, to the extent that this was possible. Both these steps were performed in line with the PRISMA Statement (Preferred Reporting Items for Systematic Reviews and Meta-Analyses) (11). The search terms “fragility fracture,” “geriatric fracture,” “osteoporotic fracture,” “hip fracture,” “femur fracture,” “femoral fracture,” “humerus fracture,” “humeral fracture, “periprosthetic fracture,” and “vertebral fracture” combined with “multidisciplinary,” “comanagement,” “co-management,” “interdisciplinary,” “comprehensive care,” and the terms “ortho-geriatric” and “orthogeriatric” were used to identify studies which investigated orthogeriatric care begun perioperatively for geriatric trauma patients (Figure 1). Study inclusion criteria were selected on the basis of the PICOS (Patient Group, Intervention, Control Intervention, Outcome, Study Design) question (Table 1), and risk of bias was evaluated using the criteria shown in Table 2. In a second stage, metaanalysis was performed on the studies identified during the review of the literature using the random effects model.

The above-mentioned search terms identified 558 citations, 49 of which were literature citations (39 original articles and 10 reviews) that met the inclusion criteria and of which the full text was available (Figure 1). Manual searches of the bibliographies of the selected original articles did not identify any further publications. Patients with proximal femoral fractures were investigated in all the selected literature citations.

Of the 39 identified original articles, 10 were randomized controlled trials (eTable 1). However, closer examination revealed that the articles by Shyu et al. (16–19, 21) and Stenvall et al. (14, 15) were based on one study or one study cohort each. These were included only once each. The metaanalysis therefore included a final total of five studies, involving 970 patients altogether (482 intervention, 488 control).

All the studies included in the metaanalysis were shown to have a high risk of bias (Table 2).

Some of the parameters examined varied between studies, so metaanalysis was performed only on length of hospital stay, hospital mortality, and long-term mortality (eTable 2).

This parameter, too, yielded heterogeneous results (I2: 31.6%). Only Vidán et al. found a significant decrease in hospital mortality as a result of geriatric intervention (12). Overall, analysis showed a relative risk of 0.66 in favor of the intervention, which was statistically insignificant (95% CI: 0.28 to 1.55; p = 0.34; Figure 3).

These results were more homogeneous than those for the other parameters (I2: 0%). Only the small study by Uy et al. showed a higher mortality rate in the intervention group (13). In the other four studies, more patients died in the control groups. With a hazard ratio (HR) of 0.79 (95% CI: 0.57 to 1.10), metaanalysis did not show significantly lower mortality as a result of geriatric intervention (p = 0.17; Figure 4).

For the other outcome parameters, Stenvall et al. showed a significant decrease in the rate of complications during hospital stay; this was also true of patients who fell during the same period (14). At the same time, in this group of patients preoperative length of hospital stay was lower than in the other studies; however, there were no major differences between the two patient groups within studies. The rate of patients who recovered their preinjury walking ability or preinjury activity level was higher in the intervention group (15) (eTable 2). Shyu et al. found that at various points during the research the functional outcome in the intervention group was better than in the control group (16–19). Nevertheless, not all of the results were significant, as shown by those of Naglie et al. (20), Vidán et al. (12), and Uy et al. (13) (eTable 2). Because methods of assessment varied and the parameters chosen were heterogenous, we did not perform a metaanalysis on functional outcome. Only Shyu et al. investigated health-related quality of life (HRQoL). They found higher HRQoL in the intervention group (21).

This systematic review and metaanalysis are intended to investigate whether interdisciplinary orthogeriatric care begun perioperatively is more beneficial than trauma surgery alone. Only five studies could be included. All five studies investigated patients with proximal femoral fractures. Interdisciplinary care led to a decrease in hospital mortality and one-year mortality, but these decreases were not statistically significant.

The selected search terms identified a number of potentially eligible studies. All the studies investigated patients with proximal femoral fractures. This highlights the worldwide significance of these fractures due to their frequency, their high treatment costs, and their lasting effect on patients’ quality of life, but also as a tracer diagnosis for suitable treatment of fragility fractures. However, in this setting it is doubtful whether findings on treatment of patients with proximal femoral fractures can be extrapolated to to patients with other fragility fractures without further information.

The five included studies, which were conducted in various countries, investigated various models of collaboration described in Pioli (30). Inclusion and exclusion criteria also differed between the included studies (eTable 1). This explains the observed heterogeneity of the studies’ results—however, the results cannot be simply extrapolated to the German health-care system. The control groups received trauma surgery only. Only a few studies compared individual models, so the models cannot be evaluated. Mazzola et al. only found earlier mobilization with interdisciplinary treatment directly after hospital admission versus interdisciplinary treatment begun postoperatively. However, this was an observational study in which patient characteristics differed between the two patient groups (33). In our opinion, local circumstances must be taken into account when developing an interdisciplinary treatment approach.

Other studies showed that patients with proximal femoral fractures, some without concomitant treatment by a geriatrician, benefited from structured, multidisciplinary, multiprofessional treatment according to treatment pathways (27, 34–37). Among other things, these approaches include early surgery; early mobilization with full weight bearing postoperatively; internal guidelines covering common problems in orthogeriatric patients such as delirium, malnutrition, coagulation management, and pain; and finally structured discharge management.

This metaanalysis was therefore only able to investigate whether early interdisciplinary orthogeriatric treatment of various types was superior to conventional trauma surgery.

The relative risk was 0.66 (95% CI: 0.28 to 1.55) in favor of interdisciplinary treatment versus trauma surgery alone, and there was no significant decrease in hospital mortality (Figure 3). Vidán et al. explain their significant reduction in mortality (0.6% versus 5.5%) by prevention or better management of systemic complications in the intervention group. In the study by Vidán et al. the rate of major systemic complications was significantly lower in the intervention group (45.2% versus 61.7%) (12). As Vidán et al. investigated Pioli’s fourth model, joint interdisciplinary orthogeriatric care from admission to discharge, the figures might provide evidence that intensive interdisciplinary care offers patients the most benefits. Astonishingly, only one of 162 patients (0.6%) died in the study by Shyu et al. (18). In contrast, the most recent mortality rate in Germany was 5.2% (31). This can be explained by the study’s exclusion criteria of terminal diseases and major cognitive impairment, which are associated with higher mortality.

As described in other studies, proximal femoral fractures are associated with considerable long-term mortality. According to a current review of the literature, one-year mortality is approximately 25% (6). Mortality in the studies included in our metaanalysis was significantly lower: an average of 15%. However, in one study the follow-up period was only six months, and in another only four months. Although the data from both studies were included in the metaanalysis using Perneger’s method (32), the varying follow-up times are a limitation. No significant reduction in one-year mortality was shown for the intervention group versus the control group (Figure 4). However, it should be remembered that the studies in this metaanalysis included only a small number of cases. In our opinion, the one-year mortality figures are evidence of a lasting effect of early interdisciplinary care that should be investigated in more detail in further studies. Bachmann et al. also included studies that concentrated on rehabilitation in a metaanalysis and were able to corroborate the positive effect of collaborative orthogeriatric care on one-year mortality (10).

Functional improvement in patients in the intervention group was achieved in most studies. These included, among others, a reduced rate of falls (14) and more frequent recovery of preinjury walking ability (15, 18), preinjury mobility (12, 20), or preinjury ADL (activities of daily living) (12, 15) (eTable 2). Because of differing measurement tools and outcome parameters, these could not be included in metaanalysis, although the recovery of independence associated with functional status is itself of great importance to patients. Only Shyu et al. investigated patients’ health-related quality of life. They found that it was significantly positively affected by interdisciplinary treatment (21). The studies analyzed here examined only length of hospital stay, in view of the costs incurred. Treatment problems are already emerging in orthogeriatric care. For example, in a survey for 2009, 37% of hospitals reported problems in follow-up care of patients with proximal femoral fractures (38). The various models of interdisciplinary collaboration may help to reduce these treatment problems. If these models improve quality of care and therefore also functional outcome, there may also be financial advantages for all those providing funding, as a result of a reduction in the demand for care. This means that health economic evaluation of interdisciplinary care versus conventional treatment approaches is essential to overall assessment.

The power of this metaanalysis is limited by the high risk of bias of all the studies it included (Table 2). In addition, there is a risk of bias across studies as a result of publication bias or selective reporting in individual studies. Although we did not perform analysis of publication bias because of the small number of studies and the high risk of bias within studies, we do not believe that there are good-quality and therefore expensive studies on this important subject that have not been published. Selective reporting, on the other hand, is more likely in our opinion. A further limitation is the fact that the literature search involved only two databases.

In the literature overall there is a variety of evidence that early orthogeriatric collaboration leads to improved outcomes for orthogeriatric patients. The small number of randomized controlled trials, which had small case numbers and were of limited quality, did not allow this benefit to be demonstrated with certainty in our metaanalysis. Randomized controlled trials with sufficient patient numbers should therefore be conducted, investigating functional parameters, quality of life, and financial issues. 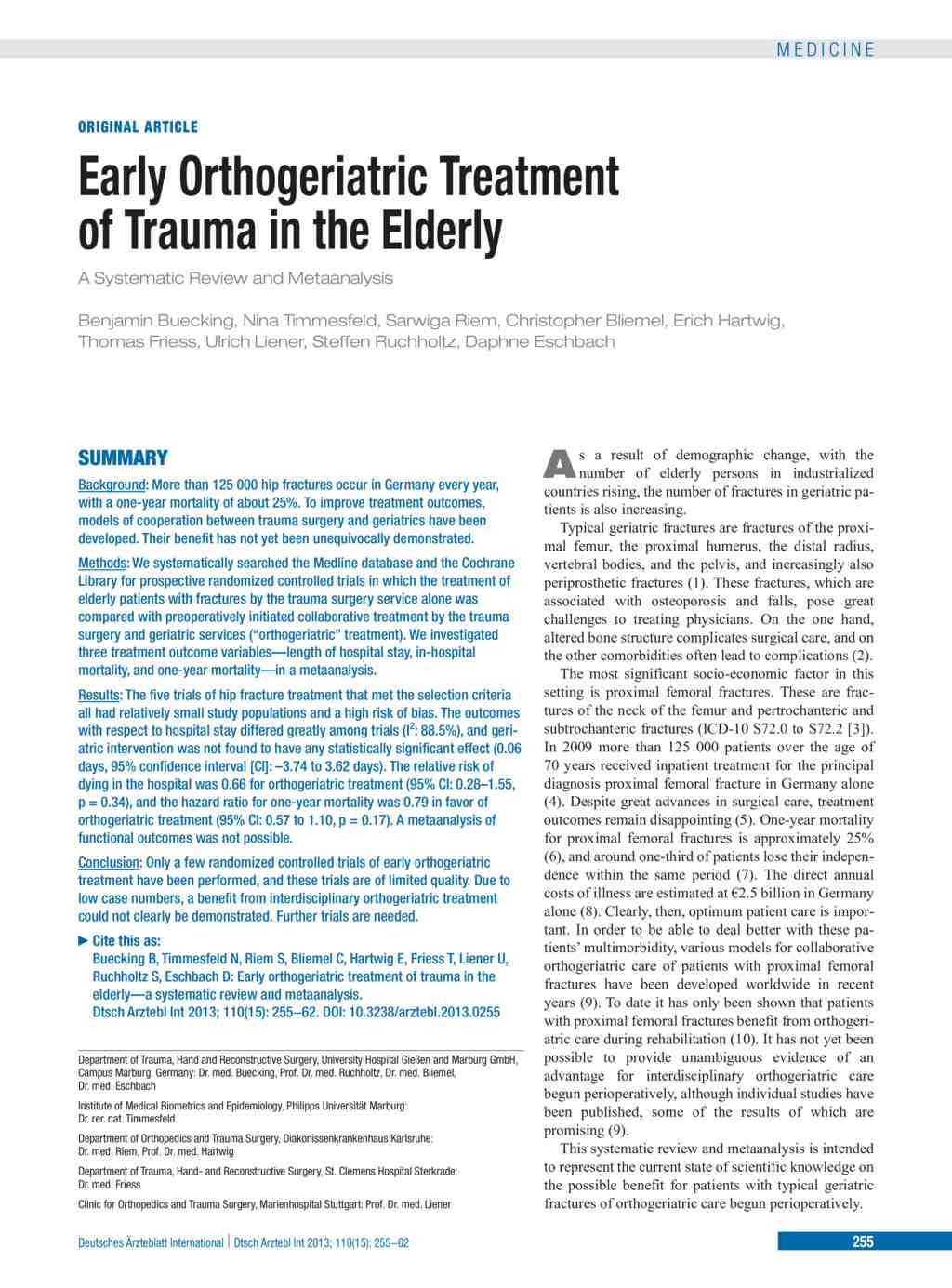