a Challenge for Neurologists and Psychotherapists

Results: Persons with dissociative seizures constitute a mixed group with a wide variety of predisposing, precipitating, and maintaining factors. Some 90% have comorbid psychiatric disorders such as depression, anxiety, somatoform disorders, personality disorders, or post-traumatic stress disorder. Video-EEG monitoring enables highly reliable diagnosis. Psychotherapy is considered the treatment of first choice; in prospective studies, it has been found to lower the frequency of dissociative seizures by at least 50%, or to eliminate them completely, in 50% to 80% of patients. An individually tailored combination of behavioral therapeutic, imagery-based, and psychodynamic approaches seems reasonable. For the treatment of psychiatric comorbidities, psychotherapy is indicated, in combination with psychoactive drugs if necessary. Before any treatment is provided, the diagnosis should be communicated to the patient in an appropriate way, ideally by both the neurologist and the psychotherapist, so that the patient can develop an alternative disease model.

Conclusion: When the diagnosis of dissociative seizures has been made, psychotherapy is indicated, possibly in combination with psychoactive medication, in the setting of long-term treatment provided in collaboration by the neurologist, psychiatrist, psychotherapist, and family physician. Further randomized trials are needed to determine which treatments are best for which subgroups of patients.

Dissociative seizures resemble epileptic seizures but have no electrophysiological correlate. Their manifestations may include alterations of consciousness such as trance or stupor, amnesia, and/or hypermotor seizures with more or less rhythmic movements of the head and trunk, muscle stiffness, and tremor-like movements. In the current diagnostic manuals (DSM-IV, ICD-10), they are considered a manifestation of a dissociative or conversion disorder (e1). Dissociative seizures are not under the patient’s voluntary control and are thought to represent the patient’s involuntary response to emotional stress (1, e2, e3).

Some 90% of patients with dissociative seizures have a comorbid psychiatric disorder (2, 3) (Table).

A systematic Cochrane review published in 2009 was also considered (6).

This review focuses on the results of studies regarding the communication of the diagnosis and psychotherapeutic approaches.

20% to 30% of patients referred to an epilepsy center for refractory epilepsy receive the diagnosis of dissociative seizures (e7). There is an average delay of seven years before dissociative seizures are correctly diagnosed (e8). The potential complications of such diagnostic delays include the adverse effects of antiepileptic medications, iatrogenic complications (e.g., vocal-cord injury during intubation or pneumothorax during central venous catheterization when the patient is in status pseudoepilepticus) (e9), the costs of unnecessary hospitalization and absence from work, delayed referral for psychotherapy, and other problems and limitations, both at work and at home (e10).

The suspicion of a dissociative disorder is aroused by the history, physical examination, and initial psychopathological exploration, particularly centered on current and chronic stress factors. The major differential diagnoses are epileptic seizures and syncope. Important points in the clinical history include specific emotional triggers for seizures such as stress and excitement, pain, certain patterns of movement (head-shaking or irregular, asynchronous limb movements), noises, and light. The circumstances in which seizures arise may also be suggestive, e.g., in the family doctor’s or hospital waiting room, or during the physical examination (e11). Linguistic studies have shown that dissociative seizures can be distinguished from epileptic seizures by the terms with which patients describe them (7, e12).

The following behavioral patterns and clinical findings should arouse suspicion of dissociative seizures:

In a prospective study (8), six features of dissociative seizures were identified that distinguish them from epileptic seizures. Dissociative seizures are typified by retained consciousness, eye flutter, and changes in the intensity of the seizure induced by bystanders. Epileptic seizures, on the other hand, are typified by an abrupt start, open or wide open eyes during the seizure, and sleep or confusion afterward.

No single feature of dissociative seizures is pathognomonic; for example, retained consciousness and interaction with observers can be seen in frontal-lobe epilepsy as well.

The misinterpretation of physiological EEG variants or artefacts is a major reason for the misdiagnosis of dissociative seizures as epilepsy (e13, e14). Video electroencephalography (VEEG) enables highly reliable diagnosis and is considered the diagnostic gold standard for dissociative seizures (e15, e16). In the technique of video electroencephalography, the seizures are captured on video while the EEG is simultaneously recorded, so that the course of the seizure can be analyzed in detail and the presence of underlying epileptic discharges in the EEG can be ruled out. The coexistence of dissociative seizures and epileptic seizures in some patients presents a special diagnostic challenge (9).

Communicating the diagnosis to the patient

Telling the patient the diagnosis is difficult for the physician and the patient alike because dissociative seizures superficially resemble epileptic seizures and because many patients have been treated for presumed epilepsy for a long time (though, of course, generally without success). Patients are ashamed of their seizures and afraid of them. They can often describe them no more than vaguely or fragmentarily, though many report flashback-like experiences or nightmarish scenarios that they live through during seizures.

Confusion, anger, denial, and suicidal thoughts have been reported as reactions to the receipt of a diagnosis of dissociative seizures (5, e17–e20). Many patients strongly resist the notion that their seizures might be caused by emotional stress, e.g., from interpersonal problems (e21). The physician and the patient must establish a shared understanding of the diagnosis from a combination of the neurological, psychiatric, and psychotherapeutic points of view (10, 11, e22, e23).

There are a number of publications about how this is best accomplished (14, 16, 17). The steps involved in communicating the diagnosis are listed in Box 1.

A potential history of sexualized violence should not be asked about directly, as experience has shown that the unprepared exploration of traumatic events may lead to uncontrollable, stressful emotional and dissociative states. The neurologist must proceed with delicacy and flexibility if the patient expresses (verbally or non-verbally) any resistance to, or skepticism about, psychotherapy.

In an uncontrolled study (16), when the diagnosis was communicated as recommended to 50 patients, 14% had no more seizures three months later, and 63% had seizures less than half as frequently as before. Only 4% were angered by the diagnosis. 86% were able to accept that psychological factors might play a role in the causation of their seizures. The patients were also given an explanatory brochure that was some 20 pages in length, and the neurologists remained available for further questions; 95% of patients viewed these resources positively. Similar results were obtained by Aboukasm et al. 1998 (12) using the diagnosis communication protocol of Shen et al. 1990 (14) in 61 outpatients, whose course was analyzed retrospectively.

Although the frequency of seizures diminishes after the diagnosis has been communicated in the recommended manner, it has been found to rise again over the long term. Thus, once the patient has been told the diagnosis, psychotherapy should be given as the treatment of choice (4, 18).

The factors involved in the generation and maintenance of dissociative seizures differ from patient to patient, depending on:

Some patients are hospitalized frequently because of their seizures (mainly with status pseudoepilepticus), while others have seizures only occasionally, e.g., during phases of particularly intense conflicts or other stressful situations. The causes of dissociative seizures being manifold, the goals and methods of treatment must be adapted to each patient’s needs (19). Studies have been published about the results of cognitive behavioral therapy, psychodynamic psychotherapy, and hypnosis (Box 2).

Overview of studies on the efficacy of psychotherapy

For the purposes of this paper, only randomized controlled trials and prospective studies (with or without a control group) are considered (24–33) (eTable 1). Prospective studies have shown that psychotherapy leads to a reduction of the frequency of seizures by at least half in 50% to 80% of patients. Cognitive behavioral approaches in an interdisciplinary treatment setting seem to be the most effective form of treatment, according to the current state of the evidence.

Only two randomized controlled trials have been published (24, 28). Ataoglu et al. 2003 (24) found that the frequency of seizures after treatment was significantly lower in the intervention group than in the control group, but this trial was flawed in terms of method: There were only 15 patients in each treatment arm, and those in the intervention group were inpatients, while the controls were outpatients.

In the trial by Goldstein et al. (28), whose methods were of high quality, the intervention group had a significantly larger reduction in the frequency of seizures than the control group by the end of treatment (from 12.0 to 2.0 per month, compared to from 8.0 to 6.75 per month; p = 0.002), with a medium-to-high effect strength (d = 0.75). Six months after treatment, the treated patients had 1.5 seizures per month, while the control patients had 5.0, but this difference was no longer significant.

The evidence suggests that the patients who stand to benefit most from psychotherapy are those who accept the diagnosis (2, 5) and those who have had a seizure acutely triggered by exogenous stress, but are otherwise in good mental and physical health (2, 4, 28, e10).

Very often, these patients’ psychiatric comorbidities require treatment with psychoactive drugs. The following recommendations can be given (e39): The drugs of first choice for panic disorders are selective serotonin reuptake inhibitors (SSRIs) and selective serotonin-norepinephrine reuptake inhibitors, such as venlafaxine. Sleep disorders can be treated either with low-potency antipsychotic drugs or with antidepressants such as trimipramine or mirtazapine. The long-term administration of benzodiazepines aggravates dissociative symptoms (34) and should be avoided. Depression can be effectively treated with SSRIs, such as sertraline, or with venlafaxine or mirtazapine if these are ineffective; further useful drugs for depression include tricyclic drugs and monoamine oxidase inhibitors. For patients with borderline disorder, whose marked affect instability puts them at risk of self-injury, the recommended treatment is with atypical antipsychotic drugs such as olanzapine (35, 36, e40) or aripiprazole (37, e41), possibly in combination with SSRIs or mood-elevating drugs such as lamotrigine or valproate. Psychoactive drugs should only be given in combination with psychotherapy and as part of a well-defined overall treatment plan (e39).

Although very little evidence is available to date from systematic controlled therapeutic trials, there is nonetheless a consensus that psychotherapy is the treatment of choice (2, 22, 38). The treatment should proceed in the following three steps (38, e42):

At present, however, insufficient evidence is available to say which types of psychotherapy are indicated under which circumstances, nor is there adequate evidence for any potential predictive factors for the success or treatment or other important procedural aspects. This is hardly surprising, as dissociative seizures have widely varying causes (unconscious neurotic conflicts exerting their effects at the psychodynamic level, trauma, conditioned learning) and are often accompanied by comorbid psychiatric disorders. In all likelihood, different types of psychotherapy, individually tailored to the patient’s problem and its underlying cause, offer the best prospects of lowering the frequency of seizures over the long term while improving the patient’s overall emotional state and quality of life (e43, e44).

Further randomized controlled trials of treatment for dissociative seizures need to be performed. There is also a need for empirical determination of the specific interventions that are most suitable for each subgroup of patients (acute vs. chronic, with or without trauma, with or without mental retardation): this is the question of differential indications. The primary endpoints of future studies should be the frequency and intensity of seizures and the patients’ quality of life, while the secondary endpoints should include psychiatric comorbidities such as anxiety and depression, social integration, ability to work, number of hospitalizations, motivation for psychotherapy, and satisfaction with treatment.

Prof. Schulze-Bonhage has received research support and payment for the preparation of a DVD on dissociative seizures from Novartis.

The other authors state that no conflict of interest exists. 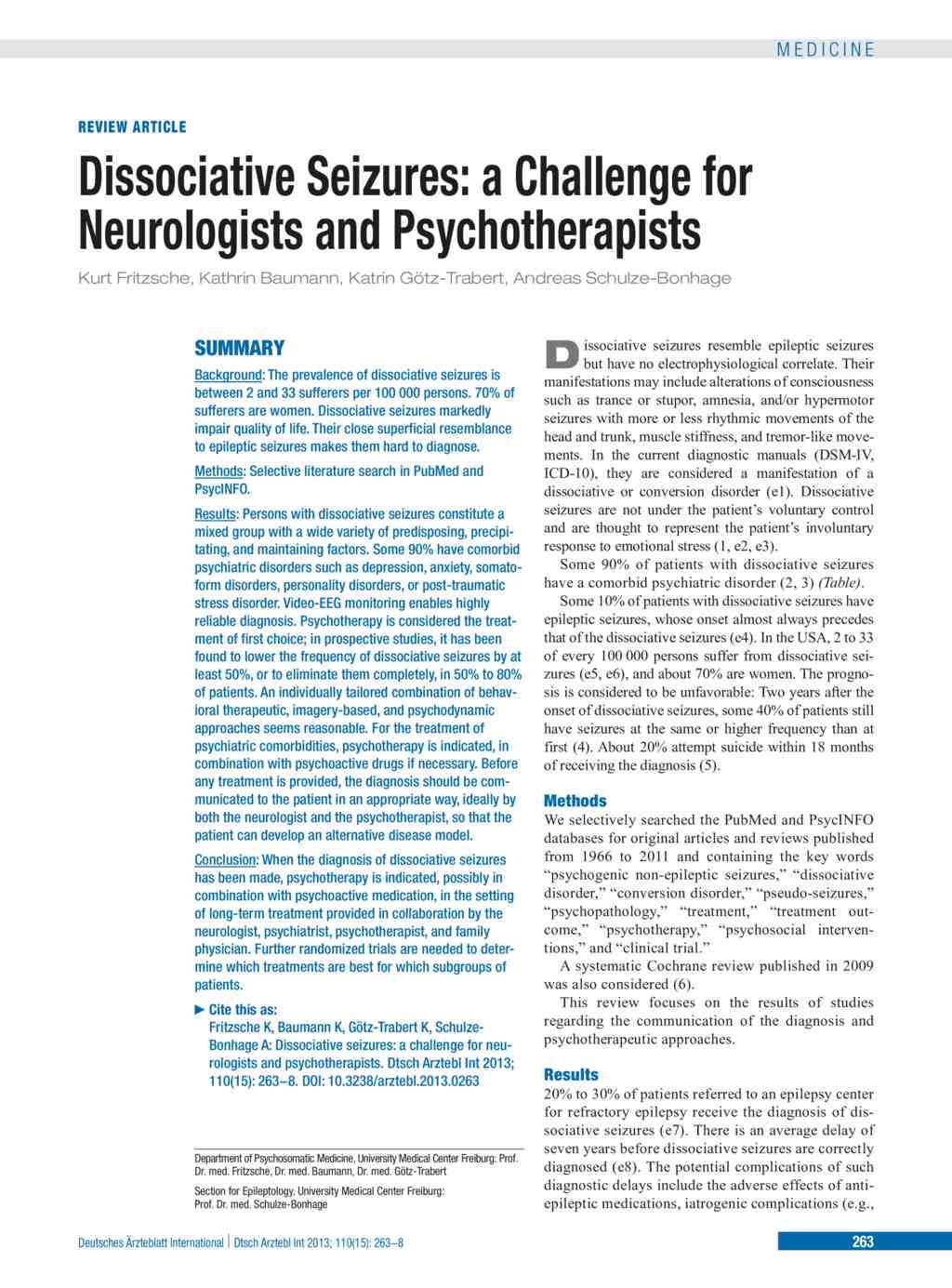