More Helpful in Relation to Etiology Than Prediction

Dtsch Arztebl Int 2013; 110(19): 329-30. DOI: 10.3238/arztebl.2013.0329
Editorial to accompany the articles “Molecular Genetic Aspects of Weight Regulation,” by Hebebrand et al., and “Type 2 Diabetes: Prevalence and Relevance of Genetic and Acquired Factors for Its Prediction” by Rathmann et al. in this issue of Deutsches Ärzteblatt International

The high incidence in certain families makes it obvious to every physician that genetic factors play an important role in common diseases. Two articles in this issue of Deutsches Ärzteblatt International outline the current state of knowledge on the role played by genetics in type 2 diabetes and obesity (1, 2). The authors describe successes, but also disappointments. Ten years ago, only few genes were known to contribute to widespread diseases. Why the recent breakthrough? There are two main reasons: first, the systematic characterization of interindividual differences in DNA sequences; second, the development of techniques for genome-wide depiction of these differences. Starting in 2005, genome-wide association studies have identified an exponentially increasing number of disease-associated loci throughout the human genome. These sites have been published in a multitude of articles, many of them in leading international journals (3). What are the implications of these findings for medicine?

Undoubtedly the greatest significance lies in the recognition of the biological processes that play a central part in the evolution of a disease. If a genetic variant is associated with a disease, this variable locus on the genome impairs biological functions to an extent that cannot be compensated by other biological mechanisms. Naturally, this tends to apply to early stages in the development of a disease rather than later stages. Although mapping of the pathway from association findings to characterization of functional impairment requires additional studies, recognition of the early stages of the disease process points to the importance of the genetic approach in research into the causes of disease. Another indication of early involvement in disease evolution is provided by the strength of the association between genetic variant and disease, measured in terms of the relative risk or the odds ratio. For various reasons, however, this association is usually only weak. Even an association finding with a low relative risk may point to a gene that is important in the disease process. Hence ever larger numbers of patients are being investigated in international consortia; for many diseases the numbers are in five digits. The genome-wide association studies usually represent the largest ever biological studies of the diseases concerned.

Benefit for the patient

Whether patients benefit from research into the causes of disease depends on whether the findings result in novel treatments. The same applies to genetic research as to other forms of research in medicine: The road from evidence of a crucial biological mechanism to development of a new drug is paved with problems and the costs are high. However, the obstacles need not be insuperable, as shown by the example of age-related macular degeneration. Attention was focused on activation of the complement system after a genome-wide association study—the first ever—revealed the involvement of the complement H gene (4). Substances that may influence complement activation are now being investigated in preclinical and early clinical trials (5).

Genetic etiological research can also lead to delineation of disease subgroups with different biological mechanisms. For most widespread diseases, however, the vision of personalized medicine is far from realization.

Besides the undoubted importance of genetic research for the elucidation of the causes of disease, it is also expected to improve disease prediction. These expectations have not yet been fulfilled. The genetic factors identified so far explain only a small proportion of the total heritability of these diseases. The reasons for this have been widely discussed in the literature in the past few years. On one hand, much more systematic analysis of the genetic contribution is required. This applies to rare genetic variants and to variants with very small effects. On the other, we are only just beginning to investigate the contribution of gene–gene and gene–environment interactions and the role played by epigenetic changes passed down the generations.

Whether genetic information leads to a clinically relevant improvement in prediction also depends on whether other risk factors for the given disease are already known. Prediction is improved only if the genetic and nongenetic risk factors exert their effects via at least partially independent mechanisms. The information gain yielded by genetic factors will tend to be lower for diseases in which known risk factors cover a considerable portion of the pathophysiological mechanisms (e.g., myocardial infarction) than for those where only few risk factors are yet known (e.g., psychiatric illnesses). The expected effect on prediction thus differs from disease to disease.

The amount of genetic data will continue to rise steeply in the next few years. While the genome-wide association studies have surveyed around a million sites on the human genome (so-called single-nucleotide polymorphisms, SNPs), sequencing of the entire genome will yield information on 3 billion sites. The enormous advances in sequencing technology have brought decoding of the complete genome of large numbers of patients within our grasp. This is clearly illustrated by large-scale projects such as the UK government initiative to sequence 100 000 patients (6). Such studies will go a long way towards establishing the genetic contribution to many common diseases. In view of the vast amounts of data for analysis, data processing, e.g., by means of bioinformatics techniques, will play an increasingly central role. Many of those involved anticipate a bottleneck for research and also for potential sequencing in the course of diagnosis. Only with the aid of bioinformatics will it be possible to filter the medically relevant information out of the flood of data.

Conflict of interest statement
Prof. Nöthen holds the registered patents “Therapeutic use of lysophosphatidic acid (LPA) and lipophilic analogues for alopecia” (EP 08 80 2632.3, US 2010/0254946 A1) and “Androgenetic alopecia” (EP 09 73 1128 6, US 2011/0104691 A1). He has been paid for contributing articles/chapters to Spektrum der Wissenschaft (special issue—Gene und Umwelt 2/13), Human Genetics (4th edition, Springer-Verlag) und Dialogues in Clinical Neuroscience (Vol. 12, No. 1). Furthermore, he has received payments from Agence National de la Recherche (ANR, France) and the Rappaport Family Institute for Research in the Medical Sciences—Israel Institute of Technology for writing reviews. He has received a fee for chairing the International Advisory Boards of the iPSYCH Consortium (Lundbeck Foundation, Denmark) and funding for research projects from FP6 (European Union, EU), Marie Curie Action (EU), NGFNplus (German Federal Ministry for Education and Research, BMBF), Netzwerke für Seltene Erkrankungen (Networks for Rare Diseases, BMBF), the German Research Foundation (DFG), and the National Institute of Mental Health (USA).

Prof. Propping has received payments from Agence National de la Recherche (ANR, France) and the Lundbeck Foundation (Denmark) for writing reviews. He has been paid for his membership of the Scientific Advisory Board of the Institute of Clinical Pharmacology (Robert Bosch Foundation) in Stuttgart and has received funding for the project “Familiärer Darmkrebs” (Familial Colon Cancer) from German Cancer Aid. 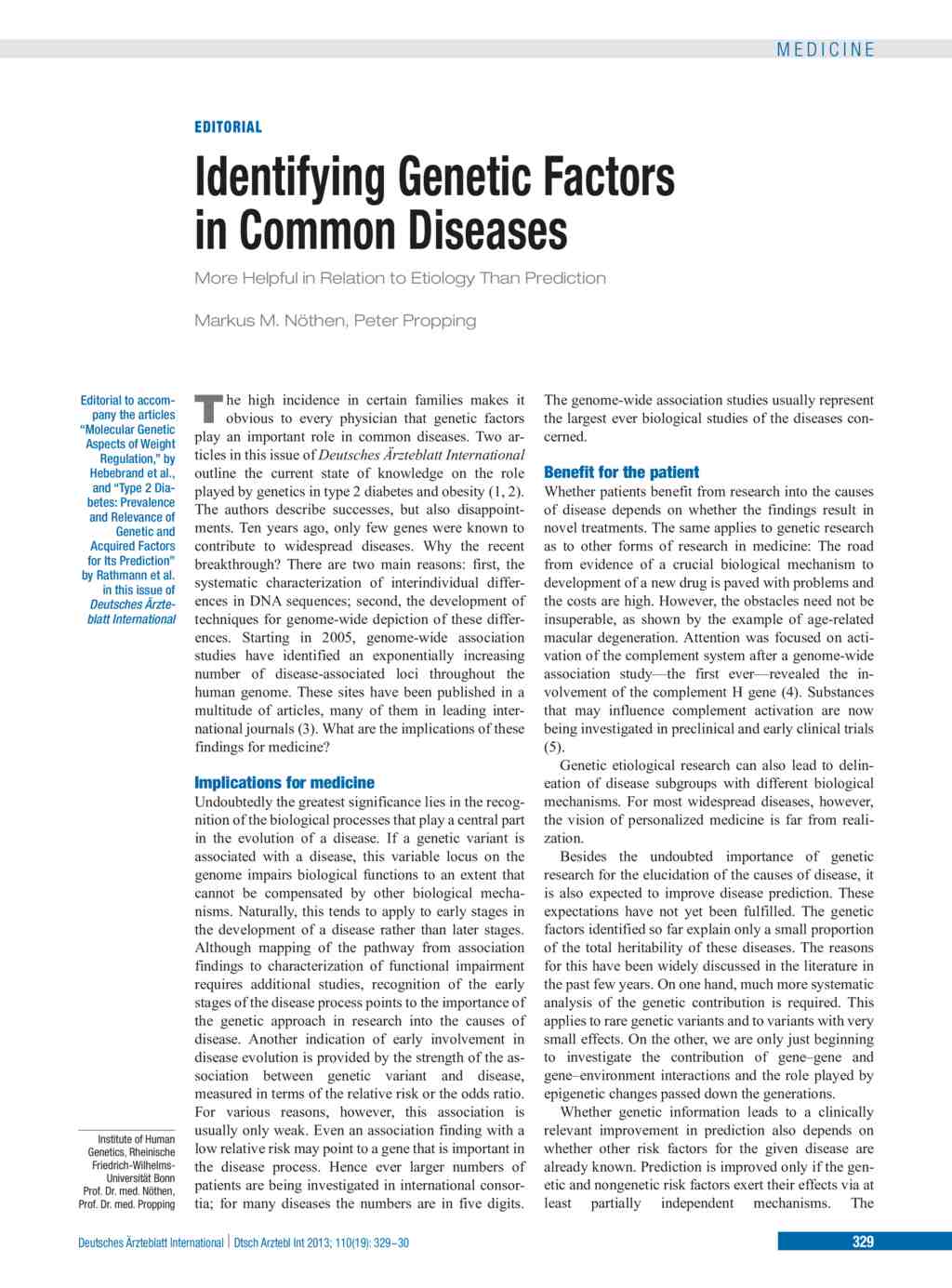