Cystic fibrosis (CF) is the most common multisystem, autosomal-recessive genetic disease leading to premature death among persons of European ancestry. It affects about 1 in every 2500 neonates in Germany. The underlying abnormality in the chloride channels of exocrine gland cells leads to the production of viscous secretions and thereby to repeated episodes of obstruction, inflammation, and infection, which, in turn, cause fibrosis and loss of function of multiple organs—above all the lungs and pancreas, but also the upper airways, the liver, the gastrointestinal tract, and the male reproductive organs. Steady improvements in diagnostic evaluation and symptomatic treatment in specialized CF centers have improved the overall health of CF patients, raising their life expectancy (median survival time from birth) from a mere few months in the 1950s to 40 years today (1). Treatment directed at the cause of the disease is now available for patients with the G551D mutation (ca. 3% of all patients in Germany [1]); such treatment provides considerable additional benefit (2) and has been officially approved. Causally directed treatments for other mutations are now being studied in phase III trials.

In Germany, cystic fibrosis is diagnosed on clinical grounds within the first year of life in only 59% of the affected patients (1). By this time, many of them have already had complications that can adversely affect their long-term outcome, such as low weight or lung damage, and that could have been prevented by timely diagnosis and treatment. At present, about 15% of all neonates in Germany are tested for cystic fibrosis in regional research programs and voluntary early-detection programs (coordinating centers: Dresden [3], Gießen, Heidelberg [4], Greifswald [5]). Since 2008, the nationwide introduction of neonatal screening for cystic fibrosis has been under discussion in the Federal Joint Committee. Meanwhile, in the neighboring countries—France, the Netherlands, Austria, Poland, and, most recently, Switzerland—such programs have already been in successful operation for years. Many studies from around the world have shown that neonatal screening for CF and subsequent treatment improve the physical development, lung function, and survival of the affected patients (6).

Neonatal screening for CF differs markedly from that for other diseases with respect to the testing methods and the procedure to be followed if an initial screening test is positive. CF is the only disease for which genetic studies are performed if the result of a biochemical marker (in this disorder, a marker for pancreatic damage) crosses a defined threshold, in order to minimize the recall rate.

Around the world, various biochemical and genetic testing methods have been studied, and many different screening tests for cystic fibrosis have been developed and are now in use.

The goal of screening for cystic fibrosis is not to avert an immediate danger to health, but rather to stabilize the patient’s condition over the long term. To spare parents unnecessary worry, the time between the communication of a positive screening result and the initiation of further testing must be kept as short as possible.

The experience with neonatal CF screening in Switzerland that is reported here shows that informing the patients about CF after their child is born is very important, and that the inclusion of genetic testing for CF did not lower overall participation in the nationwide newborn screening program (7). It is noteworthy that, in Switzerland, parents were not required to consent actively to screening, but were given a right of refusal instead (with regard to both the initial biochemical screening test and the ensuing DNA screening test, if indicated). Moreover, the results of the DNA screening tests were used only to determine whether the result of screening was positive or negative; no diagnostic use was made of these results, nor were details beyond “positive” or “negative” communicated to either the parents or the physicians (7). This strategy simplifies the information that must be given to parents about screening and establishes a clear division between screening and the confirmation of the diagnosis.

Parents’ attitudes to neonatal CF screening can be kept positive by limiting unnecessary worry, above all by shortening the time in which they will be troubled by uncertainty over the outcome of testing. In Switzerland, positive screening results are communicated to the parents by the cystic fibrosis centers: The parents receive a telephone call from the cystic fibrosis center only when an appointment for further testing can be given there within two days. The CF centers, which have a wide experience with the disease, are well equipped to answer the parents’ questions (7). As the authors of the Swiss article point out, this leads to a high degree of satisfaction with screening and minimizes worry (7).

The German Law on Genetic Diagnosis, in its current form, requires that the parents must be informed of the results of screening within 72 hours; once informed, the parents must actively seek an appointment for further testing. These requirements can prolong the phase of greatest worry. The diagnostic evaluation must be performed in an appropriately qualified cystic fibrosis center (as is now required in Switzerland) in order to ensure reliability of the sweat test and to enable comprehensive information of the parents about the test results, whether they turn out to be positive or negative. Thus, we in Germany should also have these tests performed in qualified CF centers. Early, direct contact between the CF center and the parents improves neonatal CF screening and shortens the time in which parents will worry about an as yet uncertain diagnosis.

Introduction into the German program

The Swiss experience shows that screening programs need to be continuously re-evaluated and optimized (7); in Switzerland, this is facilitated by the fact that screening is performed in a single, centralized screening laboratory. In Germany, however, neonatal screening is distributed among eleven centers. When neonatal screening for CF is introduced here, it will be important for the multiple screening programs to do so in coordinated fashion and to evaluate the outcome together. Otherwise, each individual center will have fewer cases from which to derive valid statistics than are reported here for all of Switzerland; evaluation and optimization will be difficult.

Prof. Zimmer states that he has no conflict of interest. 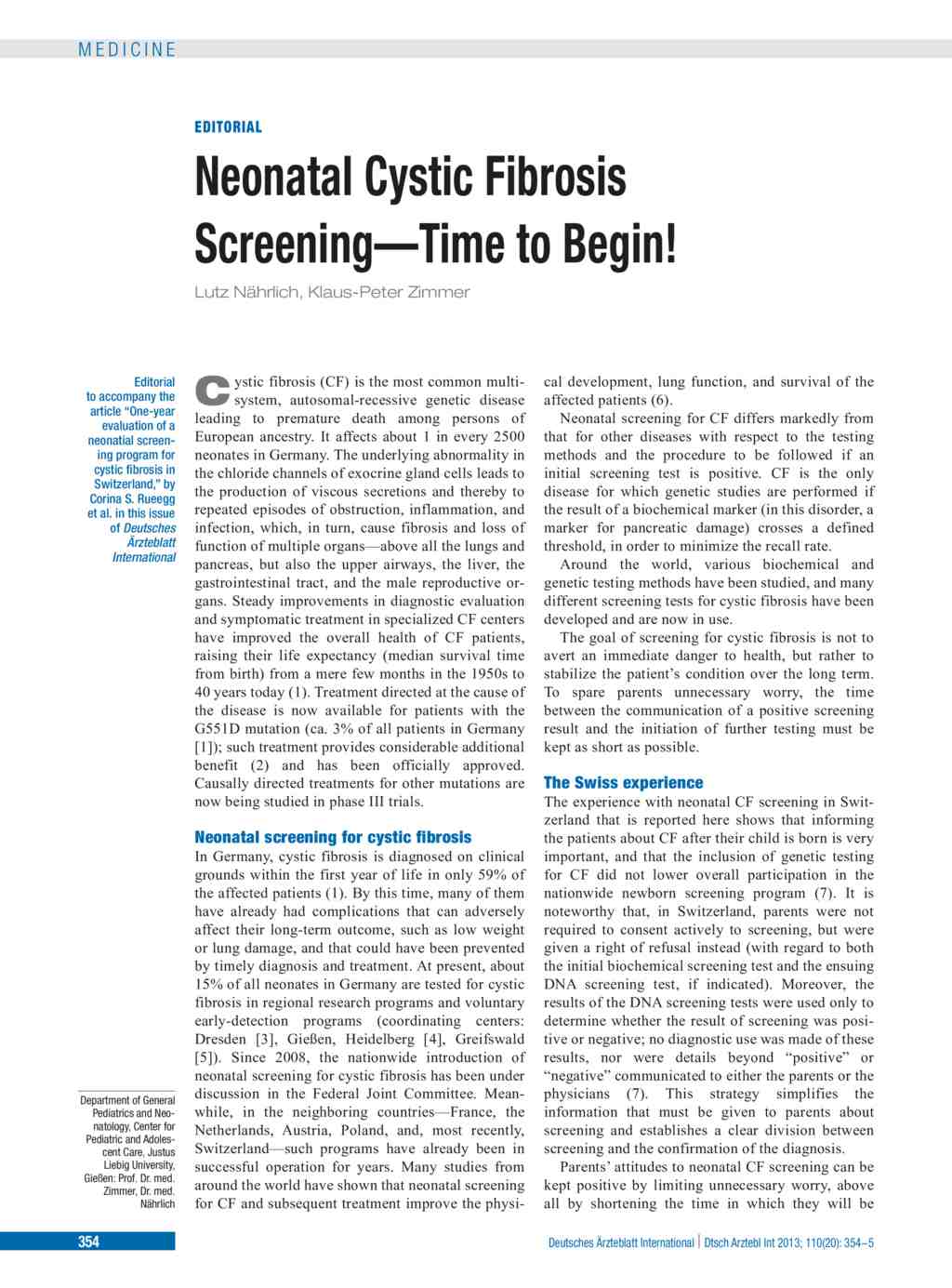