I completely agree with my colleagues, that a prognostic assessment of a resuscitated patient and especially the subsequent therapeutic recommendations should not be based on a single finding. Decisions of such enormity should be made only on the basis of several indicators that consistently point at an unfavorable prognosis. In the case of only one unfavorable indicator or inconsistent findings, such decisions should be postponed, as I emphasized in my article on several occasions.

Leithner et al. quite rightly point out that NSE can also be raised if a patient has a tumor and can therefore be used as a parameter only in the absence of tumors. After cerebral hypoxia, NSE takes a typical course, with a peak mostly between the second and fourth day after resuscitation a and subsequent drop back down to normal values. Schummer and Hottenrott emphasize that they have “repeatedly” seen patients whose values were above the cutoff point and who survived neurologically intact; they explicitly mention two patients whose cases they published (1). In one of them, the NSE concentration was 72 ng/mL, which was notably below, and in the other, 98 ng/mL, which was just above the cutoff value that I am familiar with from the literature and which is generally cited—97 ng/mL. I do not think that this one patient alone raises fundamental doubt in the prognostic importance of NSE concentrations of this magnitude, as long as one is aware of the limited validity of a single parameter.

Leithner et al. critically mention “examiner bias” in the absence of corneal reflex and pupillary light response. In my opinion, we should be able to take it for granted that experienced intensivists and neurologists are able to identify the absence of these brain stem reflexes—and only these specialists should examine such patients and assess their prognosis. They also point out that in some series, patients had a good outcome in spite of the absence of a corneal reflex (2, 3). In one study that rated survival with severe neurological deficit and the need for continuous care as a good outcome (2), the only obvious fact is that both patients were conscious—which does not necessarily equate to a good outcome. This means a rather high rate of false-positive results in one series (3) on the one hand, and, on the other hand, a series of studies in which the prognosis in the absence of the corneal reflex was without exception poor. Does this one study make all other observations worthless or useless? I do not think so, as long as one is aware of the limited value of a single parameter and makes prognostic assessments only if several indicators show consistent results. 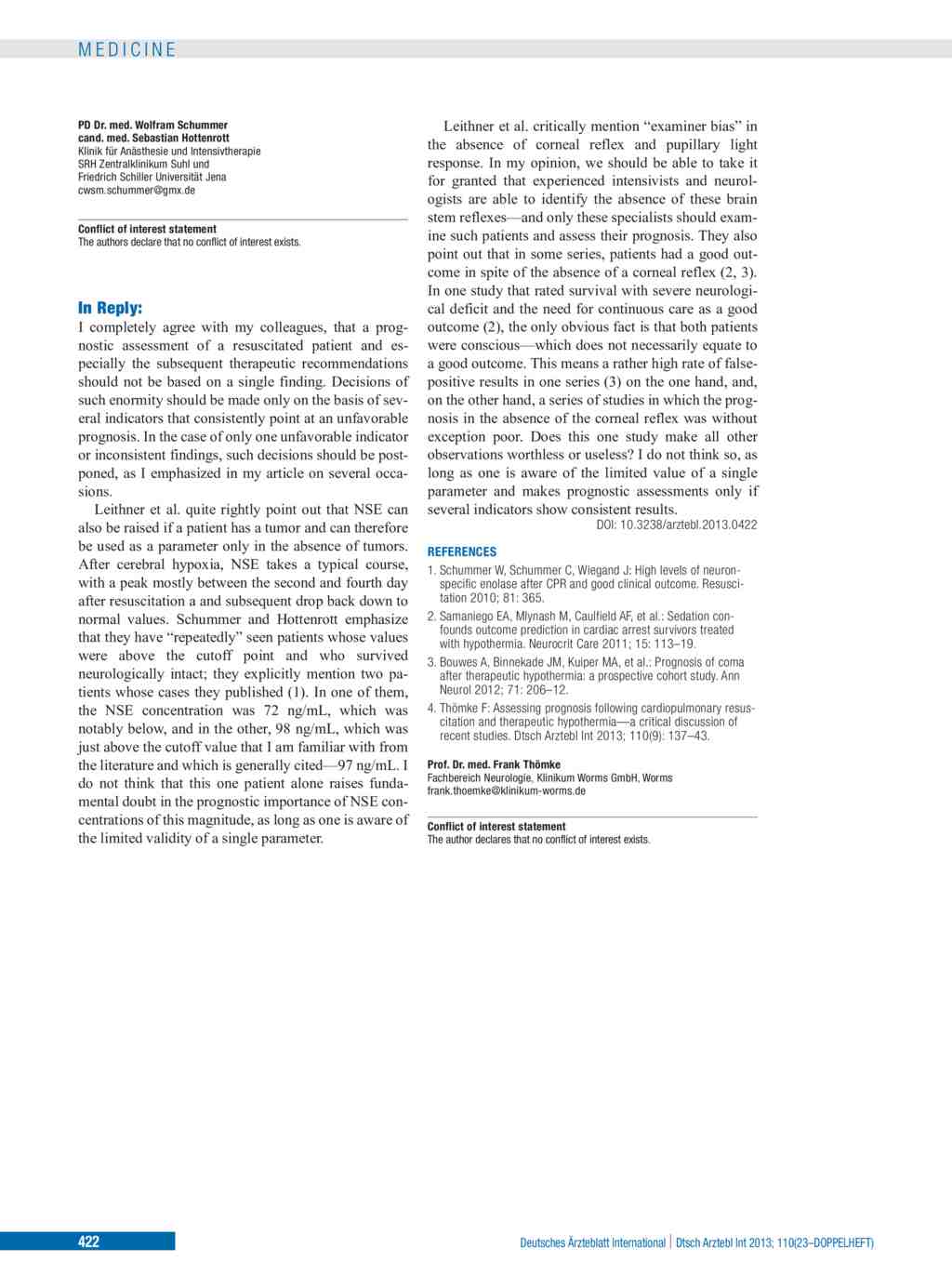