Dtsch Arztebl Int 2013; 110(25): 423-4. DOI: 10.3238/arztebl.2013.0423
Editorial to accompany the articles “Brain development during adolescence: neuroscientific insights into this developmental period” by Konrad et al. and “Growing up is hard—mental disorders in adolescence” by Herpertz- Dahlmann et al., in this issue of Deutsches Ärzteblatt International

Adolescence is the phase of life that marks the transition from childhood to adulthood. Two articles in this issue of Deutsches Ärzteblatt International are dedicated to mental disorders in adolescence, with particular attention to the developmental perspective (1, 2).

Adolescence begins with puberty, which is characterized by biological and physiological changes. This phase is associated with physical and sexual maturation.

From the biological point of view, adolescence comprises the totality of somatic and mental changes whose most obvious expression is in bodily development and sexual maturation.

From the psychological point of view, adolescence includes all of the individual processes that take place as the adolescent undergoes, contends with, and learns to cope with the somatic changes and society’s responses to them.

From the sociological point of view, adolescence can be defined as an intermediate stage in which sexual maturity has already been reached in the biological sense (puberty), but the individual has not yet come into possession of the general rights and responsibilities that enable, and indeed compel, responsible participation in the fundamental processes of society (3).

From the legal point of view, adolescence involves the progressive attainment of the legal status of an adult in different areas at different times. In Germany, persons become legally responsible for offenses they commit at age 14; permission to marry may be requested at age 16; legal majority is attained at age 18; and the applicability of juvenile delinquency law ends at age 21.

The temporal boundaries for all of the processes just mentioned are imprecise in both directions (both upward and downward). The very beginning of adolescence can be defined relatively precisely as the time of menarche or first ejaculation, or else in relation to certain bodily changes, but the end of adolescence is highly variable and is much more subject to societal influences. In view of this fact, there is a current trend to define the end of adolescence by social criteria rather than as a specific age (4).

Nearly all organs of the body and all bodily functions undergo major changes over the course of adolescence. The body gains height and weight, the rate of growth varies in a characteristic way, bodily proportions change, there are structural and functional changes in all organ systems, nearly all hormones are secreted in greater amounts, and, as a result, the external features of sexual maturation appear.

The psychological changes of adolescence include the appearance of new cognitive structures (e.g., the ability to think abstractly) and introspective ability, the establishment of moral values and norms, and a coming to terms with the developmental tasks that are specific to this period of life, as discussed in the article by Herpertz-Dahlmann et al. (2).

It is not at all surprising that young people in a developmental phase characterized by such extensive changes per unit of time are also more highly susceptible to mental disorders than at other times of life (5, 6).

No more than 15% to 20% of adolescents suffer from mental disorders; the rest continue normally onward into adulthood, although some have hindrances to overcome along the way. Brain development is of central importance for the occurrence of mental disorders, as Konrad et al. (1) discuss extensively in their article. The most important finding of neuroscientific research in this connection is that the various structures of the brain develop in staggered fashion and at different rates of maturation. A discrepancy results, with clear effects on behavior. The subcortical structures that mature earlier and therefore tend to play a dominant role in adolescence – in particular, the limbic system and the reward system – are the ones that subserve subserve emotional reactions. These reactions are under the still inadequate control of the prefrontal cortex, which matures later.

This hypothesis of an imbalance of neural influences due to a staggered brain maturation process was formulated by Casey et al. (7). It furnishes an explanation of various reaction and behavior patterns that are typical of adolescence, including:

The rising concentrations of gonadal steroid hormones also make an important contribution to the restructuring of the brain.

These changes take place in constant interaction with environmental factors. They are contributory causes of the preferential occurrence in adolescence of particular patterns of mental disturbance: in girls, mainly introverted disorders and eating disorders; in boys, mainly extroverted disorders, such as disorders of social behavior, and sometimes criminality. The main mental disorders of adolescence are discussed in the article by Herpertz-Dahlmann et al. (2).

The fact that persons aged 18 to 21 are especially prone to risky behavior has been thoroughly described and confirmed in many studies. This tendency can often lead to the commission of criminal offenses; according to German law (§105 JGG), offenders in this age group may be tried either under general criminal law or under juvenile delinquency law (Jugendstrafrecht). Our new understanding of brain development implies, however, that persons who have reached their 21st birthday have still not necessarily reached the developmental status of a fully adult human being. Rather, in view of the different speeds at which different brain regions reach maturity (7), one must presume that, even at this age, the subcortical areas (which mature earlier) are not yet subject to adequate control by the phylogenetically younger cortical areas. The latter subserve, among other things, the executive functions responsible for planning, foresight, and the weighing of decisions.

This recognition underlies the proposal that, in Germany, adolescent criminal offenders should always be tried under juvenile delinquency law, and not under general criminal law. For this to happen, the decision of the Federal Court of Justice (Bundesgerichtshof, the equivalent of the U.S. Supreme Court) of 6 December 1988 (8) would have to be revised: The decision states that adolescents should only be tried under juvenile delinquency law “when developmental processes are, in large measure, still taking place.” In adolescents, this is always so. 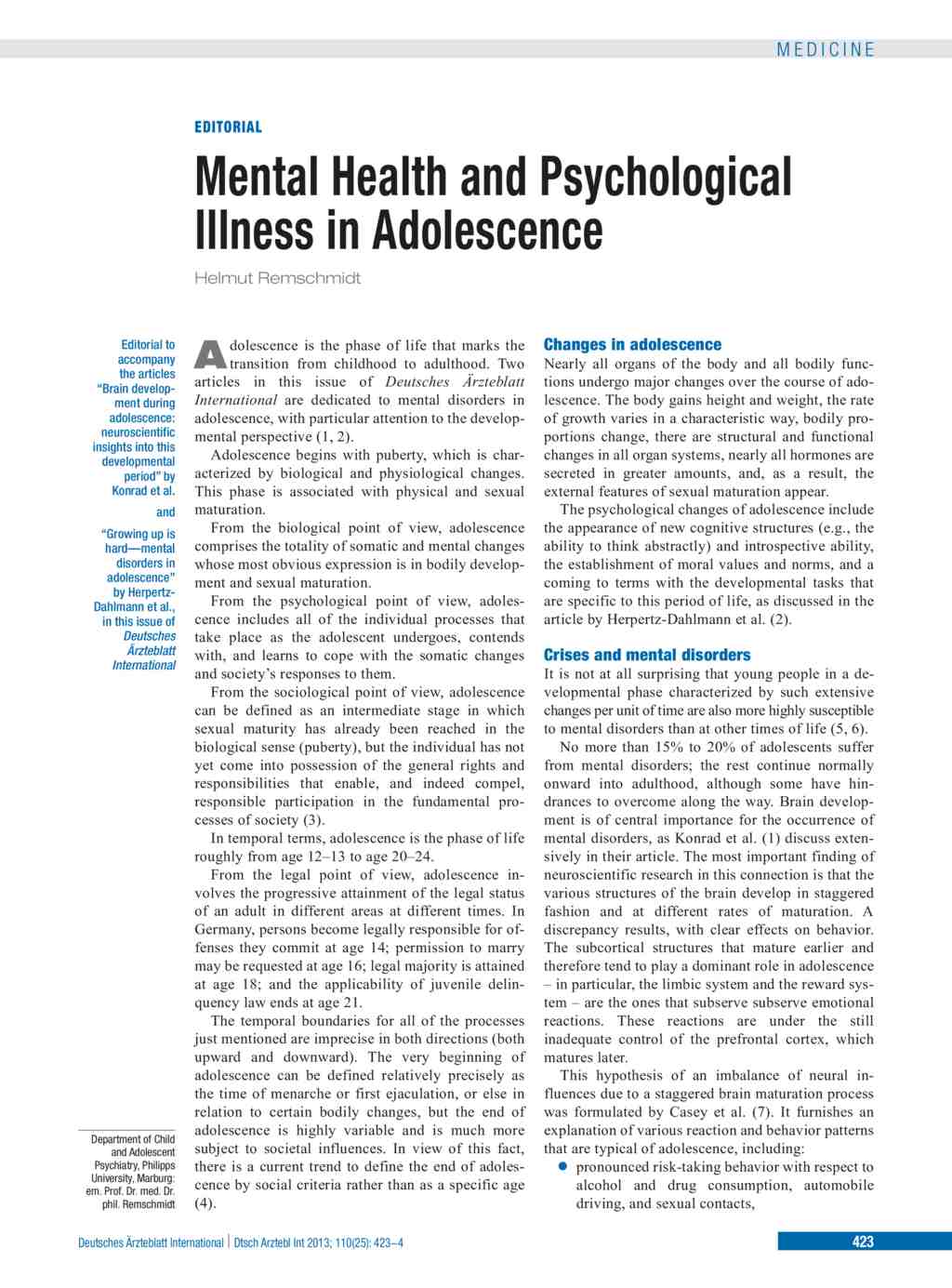