In view of the rapid development of endovascular surgery, a review article of the available evidence from the literature is to be welcomed. In our opinion, however, several issues were explained in a way that seemed less than clear.

The authors combined the EVAR studies I and II and mentioned 27 cases of aortic rupture after treatment with endovascular stent prostheses in 848 patients. In actual fact, 27 cases of rupture occurred in the proportion of EVAR I that had been randomly allocated to endovascular stenting. After subtracting intraoperative mortality this corresponds to a rupture rate of about 5% in 4.8 years (27 of 576) (1), whereas in the group of patients who had open surgery, no ruptured aneurysms occurred. Two years after implantation of the endoprostheses—at the most—repairs had to be undertaken for endoleaks (five types); 41% of patients experienced an expansion in aneurysm size five years after EVAR.

For several decades, we have not observed any prosthetic infections after open surgery in our own patients, since 5–10 mL betaisodona solution is delivered into the aneurysm sac post-surgery (2, 3).

A rate of erectile dysfunction of 60% after open surgery is an estimate. Men’s perception of their own virility is often not entirely consistent with reality. A retrospective study confirmed, 30 years ago, a rate of 40% of erectile dysfunction after open surgery; a subsequent prospective study found less than 20%, and in 4%, an improvement was found due to restoration of the internal iliac artery.

Intraoperative mortality: The EVAR I, DREAM, and OVER studies showed higher intreaoperative mortality for open procedures. However, the French ACE study showed that mortality was double that for endovascular procedures (0.7% v 1.3% [5]). For obvious reasons it is difficult to draw conclusions about the quality of the surgeon from a literature study.

In sum, a more stringent recommendation for vital permanent, long-term follow-up of patients after endovascular surgery is called for, because the aneurysm disorder is by no means cured by implanting an endovascular stent. Furthermore, it is to be expected that open surgery may become necessary not only because of infection, stent migration, endoleaks, aneurysm expansion, blockage of the blood flow through the leg of the prosthetic graft, graft kinking, paraprosthetic-duodenal fistula, and ruptured aneurysms, to name a few, and it would have been desirable to point out that today’s generation of surgeons will have to continue to master open procedures and learn these in a subtle fashion. 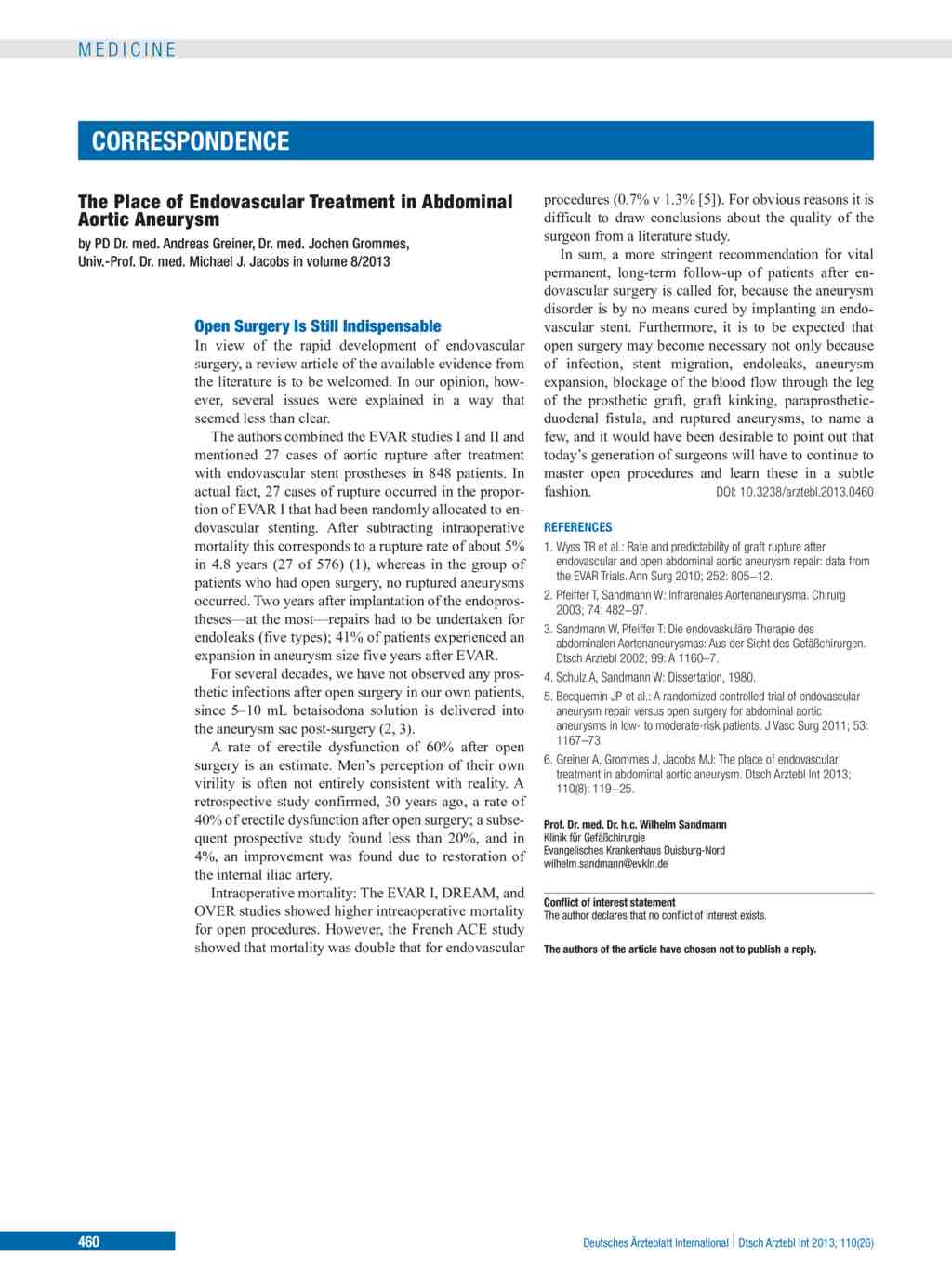