DÄ internationalArchive26/2013Rethinking the Role of Hydroxyethyl Starch in Fluid Replacement

Rethinking the Role of Hydroxyethyl Starch in Fluid Replacement

Hydroxyethyl starch (HES) solutions are the most widely used synthetic colloid volume replacement fluids around the world (1). These infusion solutions contain the osmotically active colloid macromolecule hydroxyethyl starch in various molecular sizes and varying degrees of substitution, and generally show a colloid osmotic pressure similar to that of plasma. Colloid fluids form an integral component of fluid replacement therapy because of their postulated large volume effect and long-lasting intravascular persistence. This is particularly the case in patients with acute blood loss, but also in critically ill patients, in whom—based on the physiological principle of the Starling equation—it is feared that the infusion of large amounts of crystalloid fluids will lead to greater tissue edema. In addition, experimental studies have described favorable rheological effects and stabilizing effects of HES on the endothelial barrier in inflammatory diseases.

Because of lower costs and better accessibility of HES solutions compared to human albumin, these fluids have been widely used since the 1960s for rapid restoration of intravascular volume particularly in surgical and intensive care patients. While other colloids have lost ground, such as dextran solutions because of their greater risk of anaphylaxis, or gelatin solutions because of their limited volume effect, hydroxyethyl solutions have come into broader use and been developed further—especially in Germany (2, 3). Many of the colloid resuscitation fluids used today, however, were not tested for efficacy and safety in large patient populations before being released onto the market. Since Schierhout and Roberts (4) and Choi et al. (5) published the results of their meta-analyses, the postulated advantages of synthetic colloids—although demonstrated in animal experiments—have been increasingly called into question in the clinical setting. In addition, reports of adverse effects such as renal toxicity, coagulation defects, and refractory pruritus began to accumulate (6).

VISEP—a study by the German Sepsis Competence Network that has received considerable international attention—was the first to show the nephrotoxic effects of HES (10% HES 200/05, an older, high-molecular-weight [200 kD] preparation) in a prospective randomized trial (7), and triggered a lively debate about the use of HES in patients with sepsis. Since then, several large prospective randomized controlled studies (6S, CHEST) and meta-analyses of the safety and efficacy of the modern low-molecular-weight (130 kD) HES solutions have been published. After an investigation carried out at the request of the German Federal Institute for Drugs and Medical Devices (Bundesinstitut für Arzneimittel und Medizinprodukte), the Pharmacovigilance Risk Assessment Committee (PRAC) (an expert committee of the European Medicines Agency, EMA) has recommended to the EMA that the approval for HES preparations should be suspended until convincing data are produced to show their clinical efficacy and safety in patients. This recommendation applies to all products and all indications (EMA press release dated 14 June 2013).

In this issue of Deutsches Ärzteblatt International, Hartog, Welte, Schlattmann, and Reinhart (8) critically assess the risk–benefit profile of HES on the basis of their own meta-analysis. This analysis took account of all randomized controlled trials and meta-analyses in which patients in intensive care and those with sepsis or trauma were given 6% HES 130/0.4 or HES 130/0.42 solutions or crystalloid solutions or human albumin for more than 24 hours.

After evaluating seven randomized controlled studies (7838 patients) and several meta-analyses, Hartog et al. concluded that the use of HES 130 results in no evidence of any benefit relevant to patient outcome. On the contrary, the use of this substance in patients with sepsis or those in intensive care is associated with an increased risk of patient death, an increased requirement for renal replacement therapy, and increased transfusion requirement. To what extent these reservations about the safety of HES in intensive care patients also apply to the use of HES in the surgical setting is still unclear, as no reliable studies are available on this point.

A recently published meta-analysis by Martin et al. (9) that summarized the current state of knowledge for the use of HES 130/0.4 solution in surgical patients showed no significant indications of impaired renal function. This analysis included 17 small prospective randomized studies with a total of 1230 patients. Because of insufficient data and the heterogeneity of published studies, there is an urgent need for large, homogeneous, controlled studies comparing the use of HES 130 with crystalloid solutions in the surgical setting.

The search for new solutions

The implication of the data analyzed by Hartog et al. is that the use of HES 130 in critically ill patients cannot be recommended, thus confirming national and international guidelines for the management of sepsis. More than that, the facts regarding its benefits and risks in surgical patients must be evaluated and reassessed in reliable, non-commercial studies, in order to guarantee its safety and efficacy and ensure that patients are not put at risk.

From a scientific point of view, however, the results presented here also prompt a question about how far the assumption based on the Starling equation—that intravascular volume can be better maintained with colloid osmotic fluids—is still correct in the clinical setting. For the results suggest that, bearing in mind the dynamic processes during the exchange of fluids between the intravascular and the extravascular compartments, we need to rethink and further develop our physiological understanding (10).

The development of new volume replacement fluids will require basic research, clinical research, and the pharmaceutical industry to collaborate even more closely together than before to achieve safe, effective preparations for our patients. The search for new solutions is on. 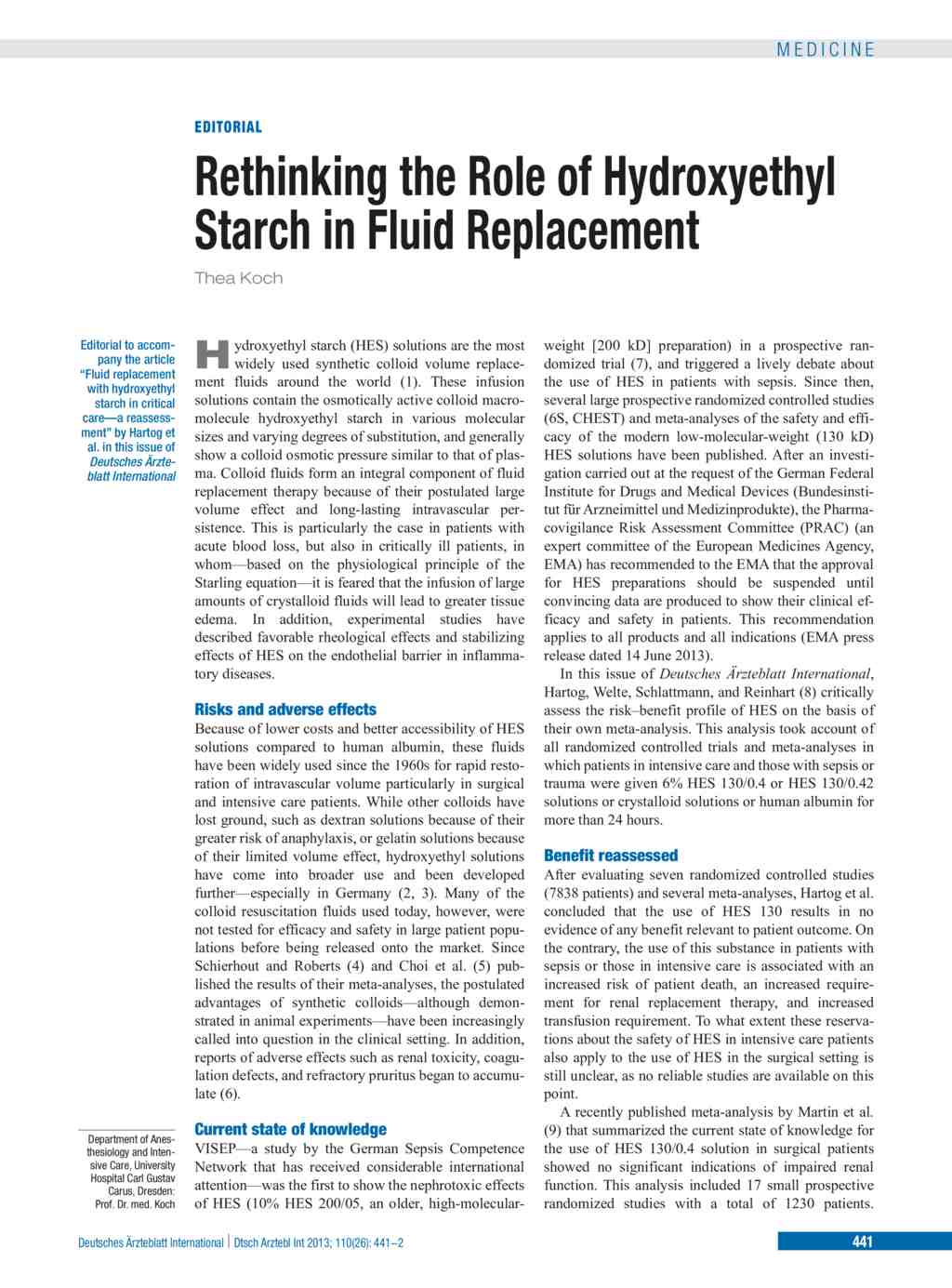