Background: Until just a few years ago, locally advanced or high-risk prostate cancer was generally considered incurable. Recently, however, evidence has accumulated that, even for these patients, the oncologic outcome after radical prostatectomy is not uniformly poor.

Conclusion: Even patients with locally advanced, nodally metastasized, or localized high-risk prostate cancer do not necessarily have a poor outcome. Although most such patients have a biochemical recurrence after radical prostatectomy, their carcinoma-specific mortality within ten years of radical prostatectomy ranges from 2% to 30% depending on the risk constellation, while their overall survival rate over the same period ranges from 58% to 89%.

Prostate cancer (PCa) is the most frequent solid malignancy among men in western countries (1). Following the adoption of routine measurement of prostate-specific antigen (PSA), the majority of PCa detected are now diagnosed at an early stage. One characteristic that sets PCa apart from other solid cancers is the usually protracted natural course of the disease. This is determined principally by the degree of differentiation, which in PCa is described by the Gleason score (2). Nevertheless, a significant proportion of newly diagnosed PCa are first detected at an advanced stage or already display very poor differentiation (high-risk PCa). In the past PCa of this type was thought to be incurable, but a growing number of studies in recent years have shown that radical prostatectomy can achieve cure in a significant proportion of patients and that tumor-specific survival after sequential treatment is not uniformly poor (3–5). The aim of the present study was to evaluate biochemically recurrence-free, carcinoma-specific, and total survival as well as long-term complications in a large, consecutive, contemporary cohort of patients treated with radical prostatectomy for locally advanced PCa, PCa with nodal metastases, or high-risk PCa. The efficacy of radical prostatectomy compared with other forms of treatment, e.g., radiotherapy, was not directly evaluated because there are no relevant original data.

Since 1992 all patients treated with radical prostatectomy in the Department of Urology at the University Medical Center Hamburg-Eppendorf (UKE) or at the Martini Hospital of the UKE have been registered prospectively in an electronic database. All patients are contacted by post at yearly intervals and asked for relevant oncological (biochemical recurrence, last recorded PSA level, additional treatment, etc.) and functional information (descriptions of continence, potency, etc.). The data are then entered into the database by specially trained members of staff. The data can therefore be evaluated retrospectively at any time.

In the great majority of patients treated with radical prostatectomy since 1992, access has been via a retropubic route (6). Starting in 2005, however, some patients are treated by means of robot-assisted laparoscopic prostatectomy (DaVinci). The staging of PCa is oriented on the TNM classification of 2002/2009 (7) (Box).

The grading of prostate biopsy samples and prostate tissue removed by radical prostatectomy was performed as described by Gleason and classified using the Gleason score (2). The prostatectomy specimens are processed in 3-mm slices according to the Stanford protocol (8). Lymphadenectomy was not carried out in all patients, but only when there was evidence of moderate to high danger of lymph-node metastasis, e.g., a preoperative PSA level of >10 ng/mL and/or a Gleason score of ≥7 at biopsy (9).

The study endpoints were biochemically recurrence-free, carcinoma-specific, and overall survival following radical prostatectomy, determined by Kaplan–Meier analysis. First, patients with locally advanced (pT3a, pT3b, or pT4) prostate cancer or metastasis to lymph nodes were evaluated. Next, the biochemically recurrence-free and carcinoma-specific survival for patients with a high-risk tumor constellation were investigated (preoperative PSA level >20 ng/mL and/or Gleason score of ≥8 in the prostatectomy specimen). With regard to PSA we oriented ourselves on D’Amico et al.’s definition of high-risk PCa. In contrast to D’Amico et al., however, we used the prostatectomy Gleason score rather than the biopsy Gleason score, because correlation of the two scores with one another is limited and the prostatectomy Gleason score is accordingly better suited for definition of high-risk PCa (10).

Furthermore, the rates of postoperative incontinence and erectile dysfunction (ED) 1 year after surgery were recorded. Postoperative incontinence was deemed to be present if the patient used one or more pads daily. We excluded patients who wore a pad just to be on the safe side although they displayed no significant involuntary leakage. ED was evaluated by means of the International Index of Erectile Function (IIEF-5) questionnaire. Here we included only those who had no ED before operation (IIEF-5 score 22–25). The software package SPSS, version 17, was used for statistical analysis.

Between 1 January 1992 and 22 March 2012, a total of 15 045 patients were treated with radical prostatectomy in the authors’ department. Of these, 732 were excluded because measurements of relevant variables were missing. A further 1051 patients were excluded from the study because they had received neo-adjuvant androgen deprivation, which can considerably hamper histological processing, potentially leading to false conclusions (11). We included patients with adjuvant or salvage androgen deprivation or adjuvant or salvage radiotherapy, however, because leaving them out would have had an inappropriate positive effect on biochemically recurrence-free, carcinoma-specific, and overall survival. The reason for this is that additional treatment tends to be given to patients perceived to have an unfavorable prognosis, or after recurrence. Moreover, we included only those patients who displayed a tumor stage ≥pT3a and/or preoperative PSA >20 ng/mL and/or prostatectomy Gleason score ≥8 and/or lymph-node metastases. A collective of 4391 patients remained for analysis. The characteristics of this cohort are summarized in Table 1.

Table 1
Characteristics of the 4391 patients
Enlarge All figures

The 10-year carcinoma-specific survival rates were:

Among patients with a high-risk tumor constellation, the 10-year carcinoma-specific and 10-year overall survival rates were 93% and 85% respectively for those with a preoperative PSA level >20 ng/mL (N = 728) and 70% and 58% for those with a prostatectomy Gleason score ≥8 (N = 559). The corresponding 10-year biochemically recurrence-free survival rates were 32% and 25%.

Table 2 shows the rates of postoperative stress incontinence and erectile dysfunction. One year after operation 87.7% of patients were completely continent. The findings with regard to potency in preoperatively potent men were as follows:

The frequency and pronounced heterogeneity of prostate cancer present considerable challenges. On one hand, there are indolent variants with a very protracted natural course that sometimes never need active treatment (12). On the other hand, one finds locally advanced tumors or tumors whose properties correspond to high-risk PCa, some of which are not amenable to cure even by radical surgery and/or irradiation. The latter are the subject of this study.

Up to only a few years ago, the recommended initial treatment in patients with locally advanced or high-risk PCa was usually palliative, predominantly radiotherapy, and only rarely radical prostatectomy. In 2006 Denberg et al. (13) published a study in which they had investigated the preferred treatment option in clinically advanced prostate cancer (clinical stage T3) in the USA between 1995 and 2001. It emerged that the proportion of patients treated primarily with radical prostatectomy sank from 18% to 9% during the study period, while the rate of radiotherapy as primary treatment rose from 58% to 69%.

Recently, however, several published studies have shown that a significant proportion of high-risk patients can be cured by radical prostatectomy or that carcinoma-specific survival is not always unfavorable after removal of the prostate despite recurrence. As early as 1994, Partin et al. noted 5-year biochemically recurrence-free survival rates of 43% following radical prostatectomy in patients with poorly differentiated PCa (Gleason score ≥8) (14). Other studies had similar findings (15). Even better results were reported in a recently published study by Stephenson et al., who found 10-year and 15-year carcinoma-specific survival rates of 92% and 81% respectively after radical prostatectomy in patients with high-risk PCa as defined by D’Amico et al. (17).

These oncological data are accompanied by recent studies evaluating the functional outcome after radical prostatectomy in patients with high-risk PCa. In a study published in 2009, our own research group investigated the rates of postoperative incontinence and erectile dysfunction following prostatectomy sparing the nerves involved in erection (6). However, no special attention was paid to the patients’ risk profile. Depending on patient age, the rate of complete continence after surgery varied between 97.4% (age <60 years) and 84.1% (age >70 years). With regard to nerve sparing, the postoperative potency rates (in preoperatively potent men) were 84 to 92% with bilateral and 58 to 70% with unilateral preservation of the pelvic splanchnic nerves. These rates of incontinence broadly correspond to those in the present study. The rate of severe ED is much higher in the present study, but it must be taken into account that nerve preservation was possible in only 48% of the patients with a prostatectomy Gleason score ≥8 on oncological grounds. The rate of nerve-sparing surgery was also only 49% in patients with a preoperative PSA level of >20 ng/mL.

A potential further advantage of radical prostatectomy over radiotherapy is that a substantial proportion of patients who suffer a recurrence after radical prostatectomy can be cured with acceptable morbidity by additional irradiation (so-called salvage radiotherapy), or show no sign of cancer activity for a variable period of time. A study published in 2009 found no grade 4 toxicity after salvage radiotherapy. The rates of grade 3 acute and late gastrointestinal toxicity were 1.2 and 0.6 respcectively, and 0.0 and 0.6% for urogenital toxicity, respectively (23). The 4-year biochemically recurrence-free survival rate was 82%.

A recurrence after primary radiotherapy can, in principle, be treated and cured by salvage radical prostatectomy; however, salvage prostatectomy is associated with a far higher rate of serious complications. Van der Poel et al. compared the rates of incontinence and erectile dysfunction after the two kinds of salvage treatment (24). Both incontinence (13% versus 56%) and erectile dysfunction (61% versus 81%) were statistically significantly more frequent after salvage prostatectomy.

It must be emphasized that the survival rates mentioned in the present study were often not achieved by radical prostatectomy alone. Altogether, 21% of patients received additional (adjuvant or salvage) radiotherapy. Moreover, 13.6% of the patients underwent adjuvant or salvage androgen deprivation. This should be considered when interpreting the findings.

Our study displays limitations. First, it was a retrospective investigation. Furthermore, the study was monocentric and the patients were treated at a specialized prostate cancer center. Accordingly, the results do not necessarily justify general conclusions.

In summary, although the majority of patients with locally advanced PCa, metastasis to lymph nodes, or high-risk PCa suffer a recurrence, only a small proportion of them die of their cancer within 10 years. Moreover, up to 53% of patients with a tumor not confined to the prostate remain free of postoperative recurrence in the long term, and with careful selection of patients the 10-year overall survival rate is between 58% and 89%, depending on the risk constellation. Nevertheless, prospective studies are necessary before we can formulate the optimal treatment strategy for such prostate cancers with a high level of evidence. 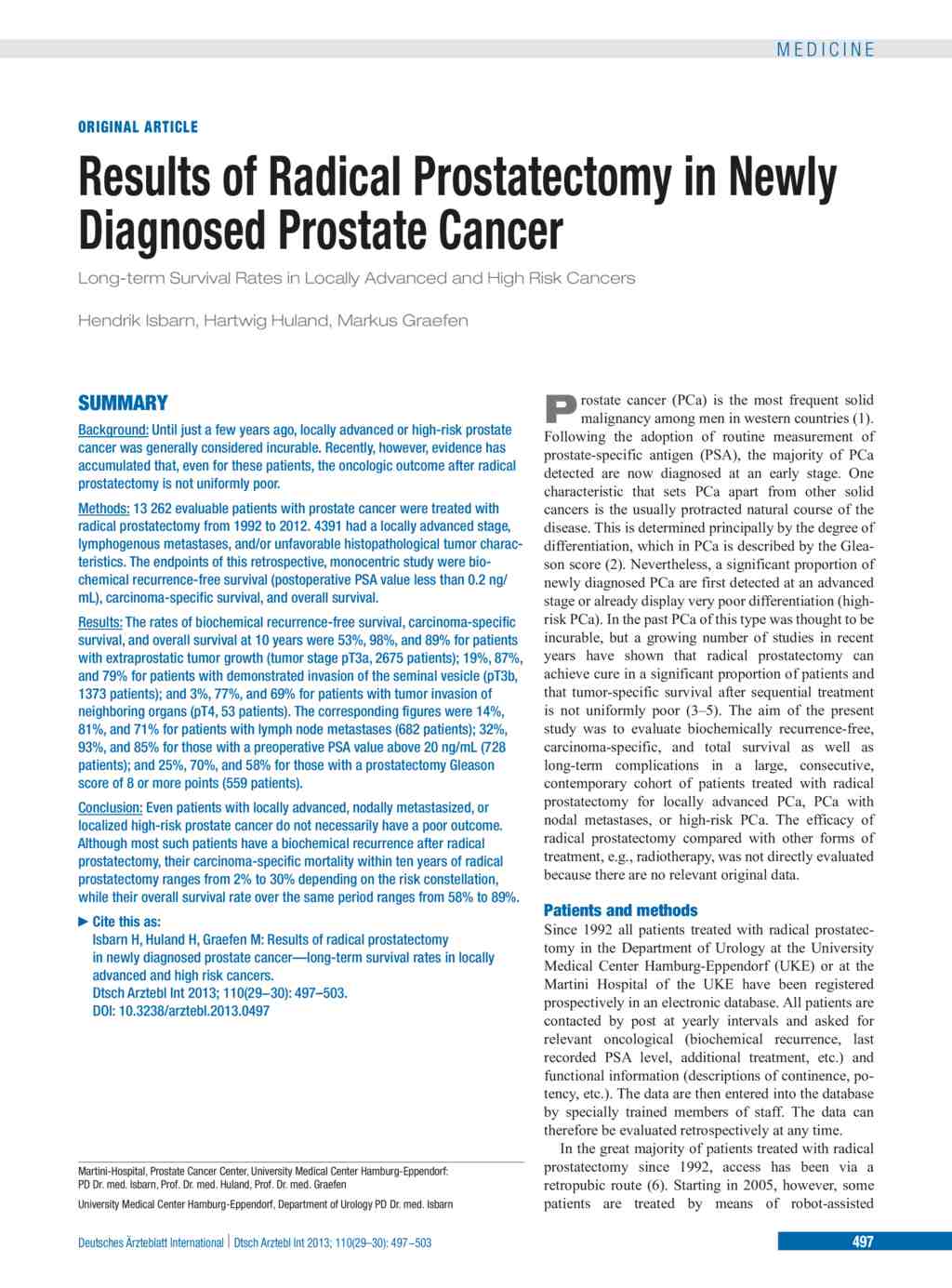