Dtsch Arztebl Int 2013; 110(31-32): 523-4. DOI: 10.3238/arztebl.2013.0523
An editorial to accompany the article “The Perioperative Management of Treatment with Anticoagulants and Platelet Aggregation Inhibitors,” by Schlitt A, et al. in this issue of Deutsches Ärzteblatt International

We have all met patients with atrial fibrillation being treated with a vitamin K antagonist (VKA) who lament the inconvenience of regular INR checks, consider their quality of life impaired, and may even have had a serious hemorrhage. Yet we also know many who have taken vitamin K antagonists for years without any problem, and we can look back in satisfaction at the many thromboembolic events from which VKAs have saved them. Physicians and patients have long been used to this situation and were more or less satisfied with it when no alternative was available. Things have changed dramatically with the introduction of the new oral anticoagulants (NOACs)—dabigatran, a factor IIa (thrombin) inhibitor, and the factor Xa inhibitors rivaroxaban and apixaban. Clinical trials have shown them therapeutically superior, or at least non-inferior, to VKAs, with less serious side effects.

Good evidence for the efficacy of NOACs

Three large-scale randomized NOAC trials, all of them sponsored by drug manufacturers—RE-LY (dabigatran), ROCKET-AF (rivaroxaban), and ARISTOTLE (apixaban)—have shown that these drugs are therapeutically superior to the VKA warfarin (dabigatran 150 mg bid, apixaban), or at least non-inferior with a similar rate of hemorrhage (rivaroxaban) or a lower rate of hemorrhage (dabigatran 110 mg bid) (1, 2). In the warfarin arms of these three trials, the time in therapeutic range (TTR) for INR was on average only 55% to 66%, so these trials may make NOACs look more effective in comparison to warfarin than they really are. Our experience suggests, however, that these TTR figures are typical in real-life situations. Higher TTRs can indeed be achieved with self-measurement of INR and self-management of VKA doses, and some of the relevant clinical trials, but not all of them, have shown that this lowers the frequency of relevant clinical endpoints such as stroke, hemorrhage, or death (3, 4). There is a further reason why NOACs may not be as superior to VKAs as the three NOAC trials imply. Dabigatran at a dose of 150 mg bid prevents about 6 more strokes per 1000 patient-years than warfarin does, while apixaban prevents about 3 more; these figures correspond to a number needed to treat (NNT) of 170 and 330, respectively (5). The high NNTs must be considered in relation to the high cost of NOAC treatment, which is a multiple of the cost of treatment with a VKA such as phenprocoumone (5). The health-economic aspects of treatment with NOACs versus VKAs are already a matter of debate (6, 7).

The management of NOACs versus VKAs

We all know patients whose INR values fluctuate markedly under treatment with VKAs, partly because of poor compliance but also, in many cases, because of interactions with other prescribed drugs, over-the-counter drugs, and foods. In a German study performed under the aegis of the Network of Regional Pharmacovigilance Centers (Netzwerk Regionaler Pharmakovigilanzzentren), one-eighth of all hospital admissions due to adverse drug effects were associated with phenprocoumone (8). Yet many things must also be considered when NOACs are given: renal and hepatic dysfunction, age, body weight, and interactions with amiodarone and many other drugs. We do not know yet how well patients will comply with NOAC treatment, or what effect forgetting to take a tablet will have on the anticoagulant effect; the effect may turn out to be considerable, as NOACs have relatively short half-lives. This could, in turn, markedly lessen the advantage gained by easier controllabililty.

If a patient taking anticoagulants because of atrial fibrillation needs elective or emergency surgery, the question of the proper type of bridging treatment arises. Schlitt and colleagues provide a comprehensive, practice-oriented discussion of the matter in this issue of Deutsches Ärzteblatt International (9).

Physicians have decades of experience with bridging anticoagulation for patients taking VKAs, but practically none for patients taking NOACs. In such cases, they are well advised to adhere to the official recommendations, which have been formulated with a view to the pharmacokinetics of the individual NPAC drugs (9). Schlitt et al. also rightly doubt, in the light of recent study findings, whether the perioperative bridging of VKA patients with heparin is really justified. At least when such patients are to undergo a pacemaker or ICD implantation, hematomas are actually rarer with uninterrupted continuation of VKAs than with heparin bridging, and there is no increase in thromboembolic events (10).

VKA or NOAC in atrial fibrillation?

There is no simple answer to this question at present. According to the European atrial fibrillation guidelines (6, 11), VKA treatment to an INR of 2–3 is of comparable therapeutic benefit to NOAC treatment (class I/A), but NOACs are to be preferred if the INR values fluctuate markedly under VKA treatment (I/B). The European guidelines favor the use of NOACs over VKAs (class IIa/A recommendation), and the American guidelines do so even more strongly, while also pointing out the limitations of NOACs, particularly for patients with impaired renal function. None of the three available NOAC drugs is preferred over the other two.

And how do we do it? Although we do not advise patients with atrial fibrillation who are already being treated unproblematically with VKAs to switch to NOACs, we generally give NOACs rather than VKAs to newly anticoagulated patients, as we think that, overall, their convenience, therapeutic benefit, and favorable side-effect profile make them better than VKA for most patients. Not least, all of the NOACs are associated with a markedly lower incidence of cerebral hemorrhage than VKAs and are thus particularly suitable for use in patients who are at high risk for this complication. We make an exception for patients from whom we expect poor drug compliance; for them, the regular INR checking that goes along with VKA use can be a useful form of treatment monitoring. The argument that newly anticoagulated patients should be given VKA until an NOAC antidote is available does not persuade us, as the fear of uncontrollable bleeding under appropriate NOAC treatment has not been borne out by clinical experience. Multiple groups of experts have also issued consensus recommendations for hemorrhagic emergencies (12, 13). A further question concerns reimbursement: The Federal Joint Committee in Germany has stated that there is “evidence of little additional benefit” for apixaban in the treatment of atrial fibrillation, but the implications of this assessment are still unclear.

In any case, the NOACs cannot (yet?) be considered universally applicable anticoagulants, as there is no convincing evidence to date that they are beneficial for patients with prosthetic heart valves.

Conflict of interest statement
Prof. Werdan has received consulting fees and research support (third-party funding) from Bayer. He has received lecture honoraria and reimbursement of conference participation fees and travel expenses from the Bayer and Boehringer-Ingelheim companies.

Prof. Presek states that he has no conflict of interest. 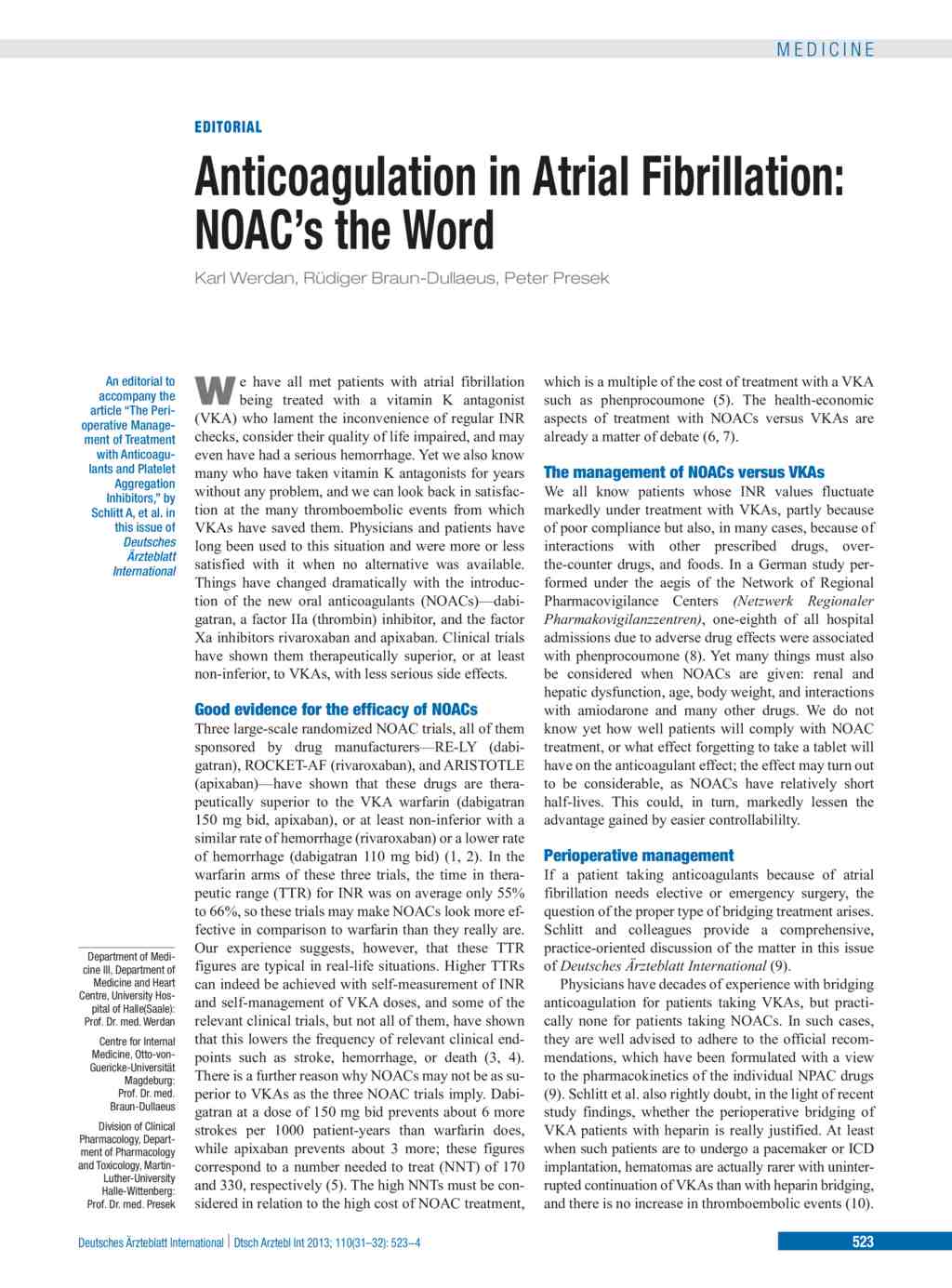