We thank our correspondents and other colleagues for their feedback on their analysis of phenprocoumon related bleeding complications and liver injuries (1).

Dr Sroka reports on patients with atrial fibrillation who developed bleeding complications while taking guideline-conform prophylactic phenprocoumon or new oral anticoagulants (NOACs). At the same time he expresses hope that current guidelines will be rethought and assessed in the near future. As a matter of fact, in the scenario of guideline-conform therapy, it is primarily older patients who are given a multitude of medications for existing comorbidities, which may trigger interactions and adverse effects (2). The fundamental problem is that guidelines are based on randomized controlled studies that are more likely to include younger, less multimorbid patients who take far fewer additional medications (3). This does not do justice to the age-related higher risks associated with anticoagulant therapy (for example, after a fall), nor the potential interactions, for example, with phenprocoumon. Our analysis of the risk of bleeding complications associated with phenprocoumon treatment and practice conditions also showed a notable increase with older age. Especially the combination with analgesics, which is common in older age, represents a substantial risk factor for gastrointestinal bleeding complications. We have to concede, however, that, although we were able to quantify the risks of bleeding complications in detail, we were not able to calculate the benefit of anticoagulation—that is, the number of prevented thromboembolic complications in the studied population.

Dr Fischer in his reader’s letter emphasizes the importance of educational training programs for patients taking anticoagulants. In the context of our study, participation in and, where applicable, the intensity of, training programs were regrettably not documented. However, our results also show that the international normalized ratio (INR) was too high in about two-thirds of patients with bleeding complications. Routine clinical practice will show the extent to which exactly these patients benefit from NOACs (4). The product information for the three currently available NOACs includes dosage reductions and contraindications taking into consideration renal function—but the question remains about whether such dosage adjustments or stopping/switching medications are even feasible in routine clinical practice in older patients and in case of fluctuating renal function (5). 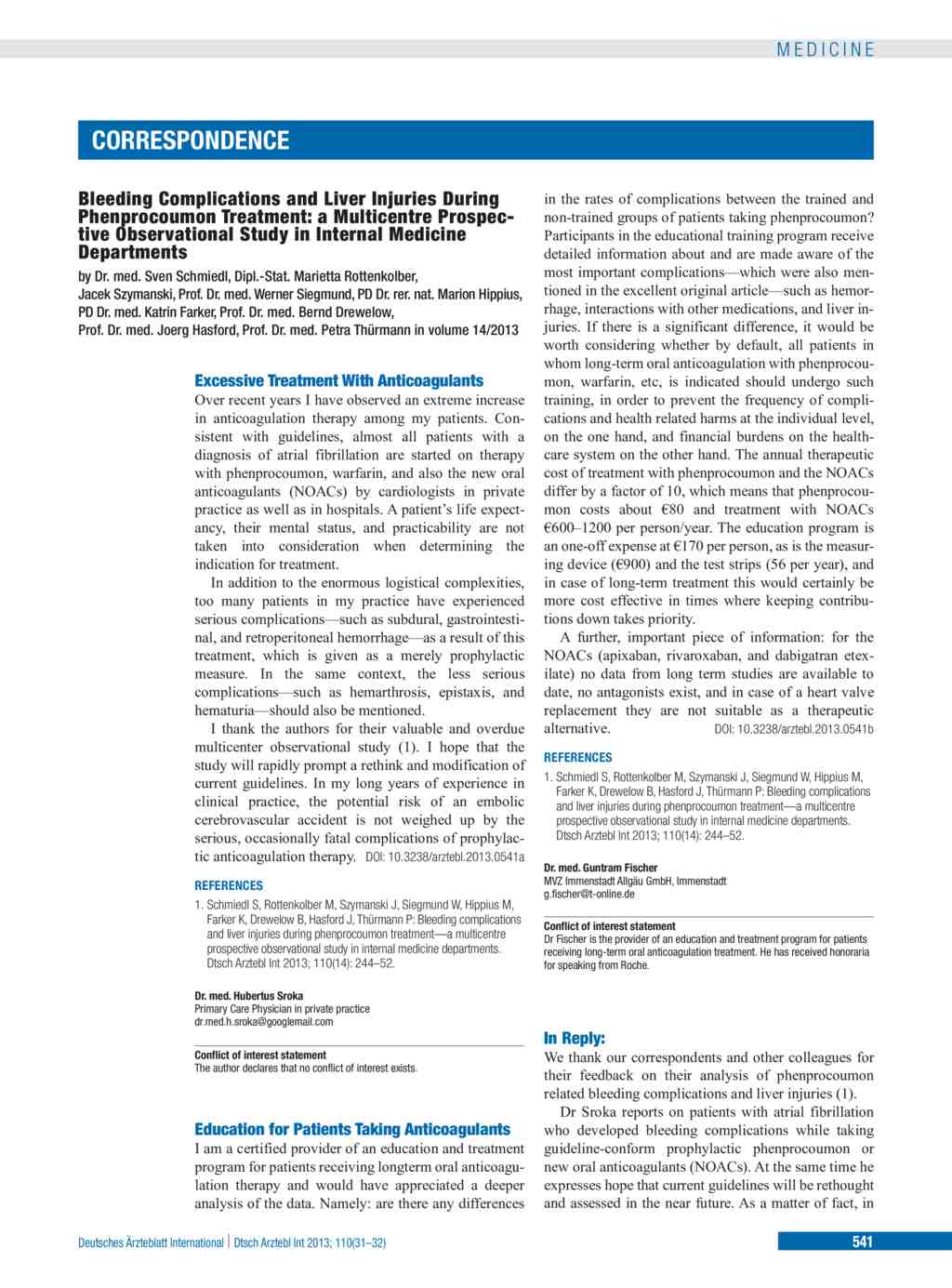