My thanks go to Professor Seifert for his corrections to the very simplified Figure 4 in my article, whose intention was by no means to represent intracellular signaling mechanisms in an exact and exhaustive fashion. A detailed explanation of the pharmacological context was not the focus of the review, and neither would it have been possible within the prescribed scope of the article. Extending and simplifying a figure taken from Simhan et al. 2007 (1) led to the inconsistencies described by Seifert, and I welcome their rectification. With regard to using ibuprofen for the purpose of tocolysis, however, I feel the need to object, since no clinical data exist in support of such a measure and since I clearly pointed out the contraindications to using indomethacin.

Dr Kiworr rightly points out the importance of induced terminations as a risk factor, which was subsumed in the review article under “a history of obstetrical problems,” but was not mentioned explicitly. A recent meta-analysis established a significantly increased risk of preterm birth (odds ratio 1.36; 95% confidence interval 1.24 to 1.50), which increases further after further terminations (2).

The other readers’ letters deal with supplementation of trace elements and hormones that were not considered in the review article, which was based on current evidence. Conradt mentions the possible benefits of magnesium substitution, which is not the same as high-dose magnesium tocolysis. Although several working groups reported encouraging outcomes in the 1980s, a Cochrane meta-analysis of seven studies concluded that because of the limited study quality, a benefit cannot be confirmed with any certainty (3). More recent review articles have found a potential benefit in pregnant women with malnutrition or a poor diet—for example, women of a low socioeconomic status or US African-American women (4).

Torremante reported his own very interesting results from a non-randomized retrospective observational study (5). However, before general recommendations can be deduced from this, the data require confirmation in further studies.

Contrary to what Dr Daumann in his letter expresses, there is no financially strong industry behind preterm birth. One indication for this is the fact that most effective tocolytic drugs are used off-label. The study he cited did not report any differences between the study groups in terms of age at birth, birth weight, and referral rates to neonatal wards. A recent publication by the same authors did not find halved rates of preterm birth, but the authors themselves wrote: “Evidence of risk reduction in infection, preterm labor, and preterm birth was suggestive … .” A Cochrane meta-analysis from 2011, of vitamin D substitution during pregnancy, does not make any recommendations because of a scarcity of study data (6).

The letter from Professor Kiesewetter, PD Dr Radtke, und Dr Schmidt from the Haemostaseologicum center recommends rapid determination of the neonate’s thrombocyte count and coagulation status, in order to prevent neonatal cerebral hemorrhage. A thrombocyte count is included among the standard first examination of preterm babies. A detailed diagnostic evaluation of the coagulation status is not done by default but on an indication-related basis, because it requires a larger blood sample and because neonatal alloimmune thrombocytopenia is an extremely rare event.

In sum, the correspondence illustrates that the prevention and therapy of preterm birth has been an unsolved problem in obstetric medicine for decades, and no easy solution exists. 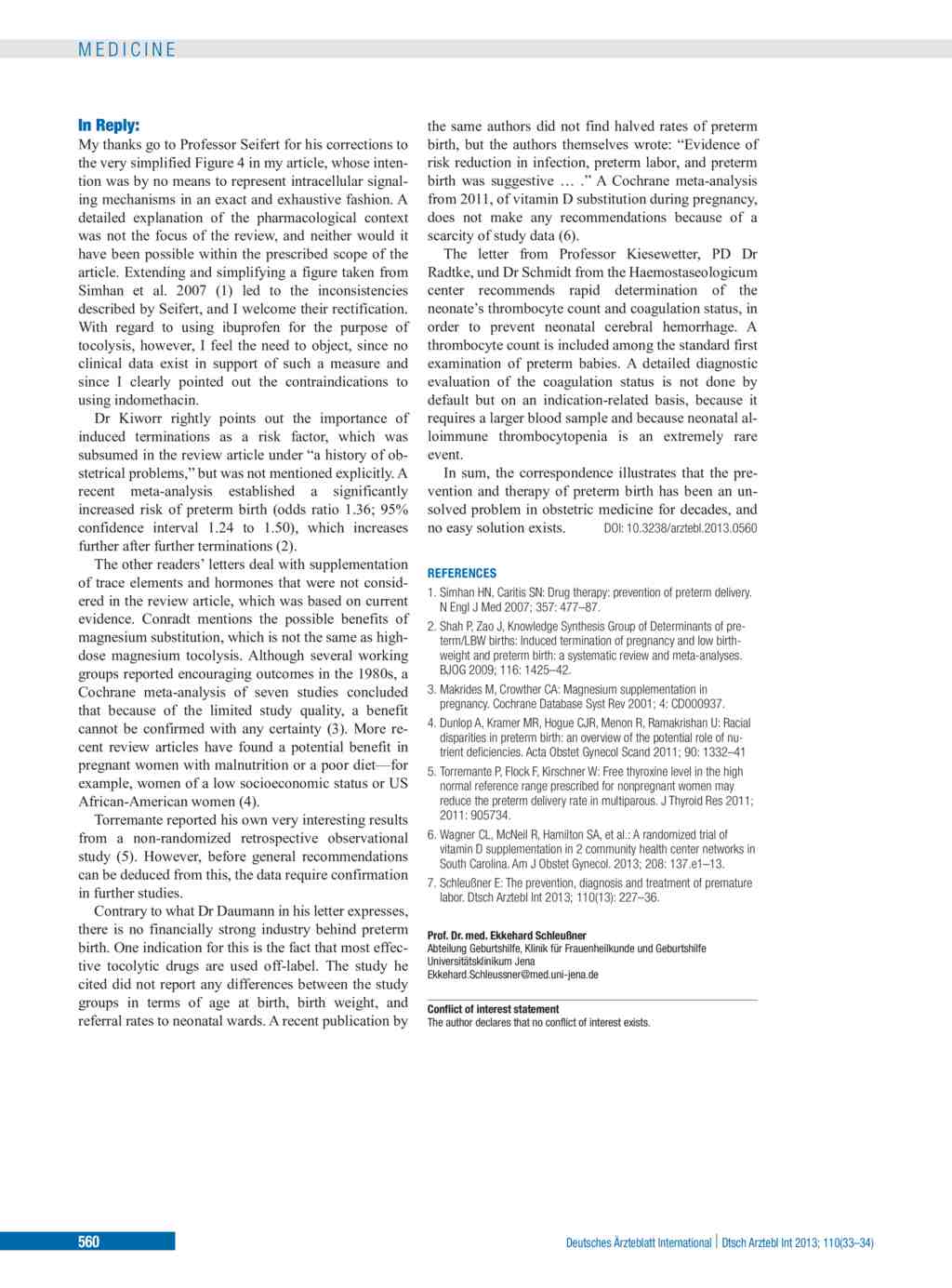