an Underrecognized Symptom in People With Impaired Mental Health

Background: In industrialized countries, about 5% to 15% of all adults have a pathologically severe fear of dental treatment, and some 3% avoid going to the dentist altogether. The affected persons may, in turn, suffer from severe dental diseases and their psychosocial effects. Many people with dental phobia have other mental disorders as well. These facts motivated us to study the prevalence of fear of dental treatment in a group of patients being treated by our psychosomatic service.

Method: 212 patients of our psychosomatic service and 95 healthy controls were studied with the Hierarchical Anxiety Questionnaire (HAQ) to determine the intensity of their fear of dental treatment. Mental disorders were diagnosed with structured clinical interviews according to DSM-IV.

Conclusion: Fear of dental treatment commonly accompanies certain types of mental disorder. Patients at high risk should be asked about such fears so that the problem can be recognized early and appropriately treated.

Some 5–15% of adults in industrialized countries suffer from pathologically severe fear of dental treatment (“dental fear”), to the point where they are able to consult a dentist only if they are experiencing severe pain (1). About 3% avoid visiting their dentist altogether (1). Those affected will experience serious dental-medical sequelae and their psychosocial effects (2, 3). Often, patients with dental fear are identified only after years of avoidance (4, 5). Massive damage to the teeth is the inevitable consequence (5). Studies in patients with high fear of dental treatment have shown severe impairments in terms of oral-related quality of life (8, 9), in addition to their obviously worse dental health (6, 7). Thomb et al. found a mean of eight teeth requiring treatment in patients with dental fear who had avoided visiting their dentist for many years (5). Many people who fear dental treatment are ashamed for the state of their teeth (10) and avoid talking or laughing in public (3, 10); some withdraw from social life altogether (2, 3). Their fear of visiting the dentist is so severe that they tolerate massive pain and delay crucially important treatment.

Therapy for dental fear has shown promising results and can be initiated quickly (11). Most of the available data relate to behavioral therapeutic interventions. A meta-analysis (11) showed for 36 out of 38 studies positive changes in self-reported fear. Two studies found no effect whatsoever. After four years of therapy, a mean of 77% of patients visited their dentist regularly. In more than half of the studies, dental treatment was a component of the therapy. An average of 6–10 sessions were assumed for the therapy of dental fear (11).

Dentists are confronted with varying intensities of dental fear on a daily basis. According to a study of the prevalence of dental fear in standard dental practices in Germany, only 0.5% meet the criteria of a dental phobia (12). Dentists often encounter such patients only during emergency sessions. At that point, the need for treatment is urgent; gentle, pain-free treatment is not always possible, and such emergency sessions often provide further confirmatory evidence in the vicious cycle of fear.

From a medical ethical perspective as well as to reduce costs for the health service, a duty arises to improve early detection measures for the disorder. Extensive dental restoration under general anesthesia or more than double the number of sickness notifications compared with the average population put a high burden on the healthcare system (1). This is a challenge for doctors and dentists alike. Close interdisciplinary collaboration between psychotherapists and dentists might succeed in identifying affected patients earlier on and to enable them to have up-to-the-minute dental care.

Study design and recruitment of participants

In the study period from July 2010 to August 2011, patients from the clinic and polyclinic for psychotherapy and psychosomatic medicine at Dresden University Medical Center participated in the study. The patients were surveyed at the start of their therapy. A healthy sample for the purpose of comparison was recruited in the Dresden area. 212 of 221 patients who were contacted participated, and 102 of 105 controls who had been approached completed the study (response rate 96%). The general inclusion criterion was an age of 18 years or older and adequate comprehension of spoken and written German.

In addition to sociodemographic data we collected data on the intensity of participants’ fear of dental treatment by using the Hierarchical Anxiety Questionnaire (HAQ) according to Jöhren (15). This questionnaire allows allocation to three groups of dental fear intensity (no/low, moderate, high dental anxiety). Two further questions prompt for participants’ self-assessment of their degree of fear. Subjects report whether they feared dental treatment (yes/no). Participants who rated themselves as fearful of dental treatment were invited—equivalent to the severity scale of the HAQ—to classify themselves as experiencing no/low, moderate, or high dental anxiety. In order to determine avoidance behavior, subjects were asked how long ago they had last visited a dentist and whether they had cancelled or missed appointments for reasons of fear (yes/no). Clinical/psychological diagnostic evaluation was done in the patient sample by using the structured clinical interview according to DSM-IV (17). Controls were questioned by using the short form of the Patient Health Questionnaire (PHQ-D) (19). The presence of panic syndrome or major depression was an exclusion criterion among controls. Further explanations of our method are in the eBox.

The patients were allocated to groups on the basis of their diagnoses (Table 1). Between 1 and 7 diagnoses were made for each patient; it was therefore possible that patients belonged to several diagnostic groups. It was of particular importance to determine the selective effect of post-traumatic stress disorder; patients with this diagnosis were allocated to a separate group and were not included in the analyses in any other diagnostic groups.

All participants were allocated to one of the three groups of dental fear on the basis of the summed score in the HAQ. Differences between patient groups and healthy subjects were determined by using Pearson’s chi-square test or Fisher’s exact test (where the expected frequencies were below 5). For diagnostic groups differing from controls with regard to the prevalence of dental fear, binary logistic regression was conducted and the highest professional qualification was used for adjustment purposes.

Ages between the two samples were compared by using the t-test. Further differences between groups with regard to sociodemographic data and self-assessment were analyzed using Pearson’s chi-square test or Fisher’s exact test. Only complete data were analyzed (missing values: patient sample n = 2 HAQ, control sample n = 2 avoidance behavior). The software package SPSS 19.0 was used for the statistical analysis.

Seven participants were excluded from the study because of their psychological symptoms in the PHQ-D.

The differences between the two samples did not reach significance regarding age distribution (t = 1.414; df = 304; p(t) = 0.158; mean difference = 2.176; 95% confidence interval of the difference –0.852 to 5.205) and sex distribution. Both samples consisted of about two-thirds of women. More patients than controls were divorced. The data regarding the highest professional qualification were significantly different (Table 2).

Table 2
Demographic characteristics of the samples
Enlarge All figures

Prevalence of dental fear in the psychosomatic patient group

Figure
Frequency Distribution of the intensities of fear of dental treatment within Groups PTSD, posttraumaticstress disorder
Enlarge All figures

Self-assessment of the intensity of dental fear

A comparison between the three fear intensity groups in the HAQ and those found in the self-assessment yields a highly significant chi-square value (χ2= 255.826; df = 4; p(χ2) <0.001). Data for all three anxiety groups (no/low, moderate, high fear of dental treatment) is shown in Table 3.

Of 134 patients and 35 controls who answered “yes” to the question of whether they experienced fear of dental treatment, 56.0% (n = 75) of patients and 22.9% (n = 8) of controls had cancelled or not attended dental appointments because of their fear. Among patients who rated themselves as highly anxious (n = 50), this was the case for 82.0% (n = 41). Three out of 6 highly anxious controls had also cancelled appointments for that reason.

The results show that pathologically high fear of dental treatment is a common comorbidity in several mental disorders. Almost one in three patients in our psychosomatic treatment center is affected by dental fear. 62.5% of highly anxious patients had visited a dentist within the past year. This means that compared to the general population in Germany, they are clearly below the average: According to the German Oral Health Study (20), 76.1% of adults visit their dentist at least once a year. Avoiding already arranged appointments is a clear indicator of dental fear (21); 82% of patients who rated themselves as highly anxious displayed such avoidance behavior. The highest prevalence rates of a high degree of dental fear were seen in patients with post-traumatic stress disorder (42.0%), anxiety disorders (31.3%), and depressive disorders (20.7%).

Since Locker et al. (14) studied exclusively 18 year olds, and since the incidence of depressive disorders rises notably only from late adolescence and after the 20th year of life (23), they observed only anxiety disorders (which usually develop in childhood or early adolescence), but not depressive disorders. The Zurich Cohort Study showed that almost half of young adults with just anxiety disorder develop depression additionally to, or superseding, the anxiety disorder in adolescence (24). Roy-Byrne et al. (13), who—like us—investigated a broad age range, reported a lifetime prevalence of comorbid affective disorders of 43% in patients who are subject to dental fear.

To date, the importance of post-traumatic stress disorder for dental fear had remained unknown. Some studies have found a link between the experience of sexual violence and dental fear (25–28). These studies did not include a psychological diagnosis on the basis of standardized instruments; the psychological symptoms of the study participants therefore remained vastly unexplained. Our own study investigated patients with different origins of their trauma, who were grouped on the basis of the psychopathology they had in common. In patients with post-traumatic stress disorder, we found the highest relative risk for fear of dental treatment. The majority of those affected developed the mental disorder as a result of emotional and physical abuse and/or of experiences of sexual violence in childhood and adolescence. Sexual violence has an important role in the development and persistence of dental fear (25–28). The effects of physical or emotional injury are thus far unknown and should be investigated in future studies. The results regarding participants’ self-assessment of the intensity of their fear are consistent with those from the questionnaire survey. In routine clinical practice, asking about fear of dental treatment and its intensity is therefore useful in order to gain awareness of the problem without having to spend enormous amounts of time. Our data collection—a naturalistic study—represents the typical cross-sectional profile of psychosomatic treatment centers in Germany. Owing to the high response rate in the questionnaire survey, selection bias due to participants’ interest in the topic can be excluded. As the data collection instruments meet the criteria of DSM-IV, international comparability is ensured. Using structured interviews for the purposes of diagnostic evaluation ensures a high degree of objectivity in allocating a diagnosis in the patient sample. Only the most common mental disorders at the syndrome level were captured by using the PHQ-D for the control sample; the presence of further disorders cannot be ruled out.

In routine clinical practice, it is easy to ask patients whether they experience fear of dental treatment. In patients with post-traumatic stress disorder, anxiety disorders, or depressive disorders, the possibility of dental fear should always be borne in mind. Doctors from different medical specialties, who are in close contact with such patients, can help early detection of the disorder through targeted questioning. Awareness of the problem should also prompt dentists to think about post-traumatic stress disorder in phobic patients. Treating patients with mental multimorbidities is the biggest challenge for psychotherapists and dentists and requires close interdisciplinary collaboration. 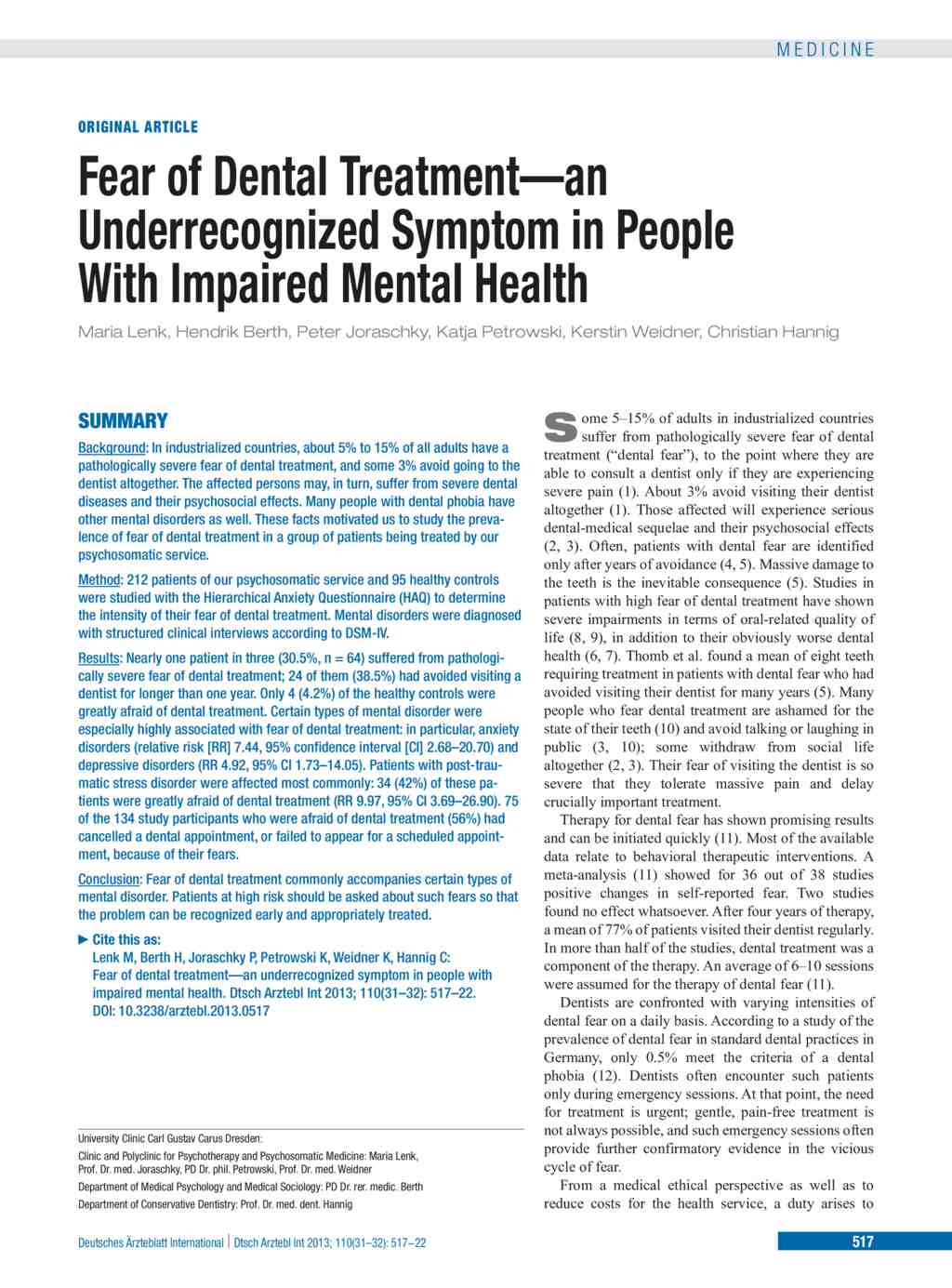