Background: Nosocomial infections (NI) increase morbidity and mortality. Studies of their prevalence in single institutions can reveal trends over time and help to identify risk factors.

Methods: In March and April 2010, data were prospectively recorded from all inpatients at the Hannover Medical School (Germany) except those treated in the pediatric, psychosomatic, and psychiatric services. The data were acquired systematically by chart review and by interviews with the medical staff. Infections were classified according to the definitions of the Centers for Disease Control and Prevention (CDC). Information was obtained on underlying diseases, invasive procedures, the use of antibiotics, devices (the application of specific medical techniques such as drainage, vascular catheters, etc.), and detected pathogens.

Results: Of the 1047 patients studied, 117 (11.2%) had a total of 124 nosocomial infections, while 112 (10.7%) had 122 community-acquired infections. The most common NI were surgical site infections (29%), infections of the gastrointestinal tract (26%) and respiratory tract (19%), urinary tract infections (16%), and primary sepsis (4%). The most common pathogens were Escherichia coli, coagulase-negative staphylococci, Candida spp., Enterococcus spp., and Pseudomonas aeruginosa. Multivariable regression analysis revealed the following independent risk factors for NI: antibiotic treatment in the last 6 months (odds ratio [OR] = 2.9), underlying gastrointestinal diseases (OR = 2.3), surgery in the last 12 months (OR = 1.8), and more than two underlying diseases (OR = 1.7). Each additional device that was used gave rise to an OR of 1.4. Further risk factors included age, length of current or previous hospital stay, trauma, stay on an intensive care unit, and artificial ventilation.

Conclusion: In this prevalence study, NI were a common complication. Surgical site infections were the single most common type of NI because of the large number of patients that underwent surgical procedures in our institution. More investigation will be needed to assess the benefit of prevalence studies for optimizing appropriate, effective preventive measures.

Data from Germany’s Hospital Infection Surveillance System (Krankenhaus-Infektions-Surveillance-System, KISS) (www.nrz-hygiene.de) and the national prevalence study NIDEP-1 conducted in 1994 (1) show that 400 000 to 600 000 nosocomial infections (NI) occur annually in Germany, with 10 000 to 15 000 deaths (mortality = 2.6%; up to 10% in intensive care units) (2). The length of stay in an intensive care unit is prolonged by an average 5.3 (± 1.6) days if the patient acquires an NI (3). Apart from the high morbidity and mortality, NI is associated with higher costs: Graf et al. calculated additional expenditure of € 22 905 for surgical site infection following sternotomy (4). An investigation of the costs incurred by nosocomial pneumonia from Staphylococcus aureus revealed that additional charges of € 17 281 per patient could be attributed to methicillin resistance in S. aureus pneumonia (5).

Prevention of NI is therefore crucial, and adequate preventive measures have to be established. Particularly important in this regard is knowledge of the distribution of NI, the risk areas, and the patient-related risk factors. These efforts are supported by the 2011 amendment of the German Protection against Infection Act (Infektionsschutzgesetz, IfSG) and the related establishment and alignment of the hygiene regulations in the German federal states. These regulations created the conditions necessary for improvement of hygiene and medical quality in patient care.

Prevalence studies can reveal weaknesses which allow needed measures such as quality and process parameters to be established. This in turn allows good standards of hygiene to be secured, for example via the implementation of guidelines.

Studies of NI prevalence in various European countries show rates between 3.5% and 11.6% (1, 6–10). Urinary tract infections (UTI) are the most frequent NI, followed by pneumonia, surgical site infection, and primary sepsis. These prevalence studies are multicenter investigations and seldom reflect the individual distribution of the different NI or the respective risk factors in medical facilities with particularly high rates of NI.

In the knowledge of the impending amendment of the IfSG and the lack of data on NI at high-level university hospitals with a focus on surgery, we decided to conduct a prospective study of the prevalence of NI. Our aims were to detect all infections (nosocomial and community-acquired), identify the risk factors for NI, and accordingly modify the practices of infection control in our own institution, introducing new prevention measures if necessary.

All inpatients treated at a university hospital with 1411 beds (Hannover Medical School ) between 1 March 2010 and 30 April 2010, with the exception of those in the departments of pediatrics and psychiatry and psychosomatic diseases, were included in the prevalence study.

Infections were classified according to the definitions of the Centers for Disease Control and Prevention (CDC) (11). An infection was defined as nosocomial if the first signs of infection occurred more than 48 h after admission.

On every weekday members of the infection control team recorded, for each patient, all investigations, results, and notes made by nurses and physicians. The nursing and medical staff were interviewed on the day of the patient’s inclusion in the survey. Furthermore, patient-specific parameters such as demographic data, underlying diseases, invasive interventions, recent hospital admissions, and antibiotic treatment were recorded.

Descriptive statistical evaluation was accompanied by univariate and multivariate risk factor analysis, with the aim of identifying independent risk factors for the presence of at least one NI compared with patients without NI.

The methods are described in more detail in the eBox.

Figure
Prevalence of infections among inpatients
Enlarge All figures

The distribution of the most frequent kinds of infections is shown in Table 1. The predominant CAI were pneumonia (n = 28) and infections of the gastrointestinal tract (n = 25).

Table 1
Distribution of the types of infection
Enlarge All figures

Among the 124 NI the most frequent pathogens were Escherichia coli, coagulase-negative staphylococci and Candida spp. (Table 3). Eighteen (15%) of the bacterial pathogens showed conspicuous (multi)resistance. This group included:

One in every five patients (22%) in this prevalence study was found to have an infection. Nosocomial infections and community-acquired infections (CAI) were found in similar frequency (11.2% versus 10.7%). Recent investigations of the prevalence of infections in hospital have focused exclusively on NI, so that older studies have to be consulted for data on the overall prevalence of infections in hospital inpatients. The multicenter study conducted by Emmerson et al. in 1994 described a similar overall prevalence (23.7%), but there were notably more CAI than NI (14.7% versus 9%) (12). Also in 1994, Rüden et al. found an overall rate of infections of 13.5% in Germany (1); again, the CAI predominated (10% versus 3.5%). The 11.2% prevalence of NI observed at the University Hospital of Hannover Medical School is at the high end of the range reported from hospitals with more than 600 beds or university hospitals in various European countries (4.4 to 13.5%) (Table 6). However, the 28.2% prevalence of NI in intensive care units in our study was comparable with that in other investigations (25 to 48%) (Table 6).

Caution is necessary when comparing the findings of such prevalence studies because of the potential differences in the way they were conducted. The factors with the greatest influence on the results are:

In the present study we excluded patients from the departments of psychiatry and psychosomatic diseases and pediatrics. The results of prevalence studies in pediatrics (3.4 to 7.5%) (13–17) and psychiatry (0 to 3.5%) (9, 12, 17) suggest that inclusion of these specialties would have lowered the prevalence of NI at the University Hospital of Hannover Medical School.

The distribution of pathogens corresponds to the pattern in previous studies, with E. coli, Pseudomonas aeruginosa, enterococci, and coagulase-negative staphylococci as the most frequent causes of NI (6, 8, 10, 16). In contrast to those earlier surveys, however, we found only a small number of NI due to S. aureus. This may be explained, particularly with regard to surgical site infections, by the preventive measures routinely taken at the Cardiothoracic, Transplantation, and Vascular Surgery Department of the University Hospital of Hannover Medical School, where all patients are washed with antiseptic lotion and have mupirocin ointment applied to the nares immediately before surgery (28). Moreover, a higher proportion of NI were caused by multiresistant gram-negative bacteria (MRGN) (8%) than by methicillin-resistant S. aureus (MRSA) (2%) and vancomycin-resistant enterococci (VRE) (2%). The trend towards an increase in MRGN is already apparent in German intensive care units (29, 30). The observation of a low number of infections involving MRSA is not in agreement with previous publications (31).

Alongside the noncontrollable patient-related factors—such as diseases of the gastrointestinal tract, presence of more than two underlying diseases, and operations in the previous 12 months—controllable exogenous factors were identified: the risk of an NI increased by a factor of 1.4 with every device used.

Other studies identified isolated urinary catheters, vascular catheters, and invasive ventilation as independent risk factors (17, 18, 21, 32). When one also considers that UTI, pneumonia, surgical site infections, and primary sepsis account on average for 80% of the NI in the publications listed (1, 22, 32), it seems plain that prevention of device-associated infections is highly important. Unexpectedly, antibiotic treatment in the previous 6 months that was not given for management of the current NI had the strongest association with presence of an NI (OR = 2.9). Fitzpatrick et al. and Ilic et al. found inter alia that systemic administration of antibiotics was associated with NI (20, 21). On one hand this could indicate a patient’s high morbidity; on the other, it may point to an immunomodulatory effect of antibiotics. This aspect requires clarification in more detailed studies. The prevalence of systemic antibiotic administration (n = 473, 45%) in our survey was relatively high compared with other European studies (range 19 to 59%) (19, 33–35).

Our prevalence survey was a single-center study at a top-level university hospital with a focus on surgery, so its findings are not transferable in toto to hospitals with other foci or to the situation in Germany in general.

The relatively large collective of 1047 patients means the results are likely to be robust, however, and the survey is comparable in size with the single-center study of 1501 patients by Ciofa degli Atti et al. (13) and the multicenter study by Magill et al. with 851 patients (22). Under-reporting of NI seems unlikely in our study, because all kinds of NI were recorded. The results can deviate by up to 34% when focusing exclusively on device-related NI (1, 22, 32), and other important and/or frequent types of infection, e.g., gastrointestinal infections, can be overlooked. The time of year chosen for the survey may have affected the distribution of pathogens and also the prevalence of NI, particularly gastroenteritis caused by noroviruses and C. difficile, which are found more frequently in the cooler months (26, 27). Prevalence of NI can also be considerably affected if there happens to be an outbreak of infection at the time of the survey, and this has to be taken into account when interpreting the data. Rates of NI may also be overestimated; such overestimations are ascertained much more often in prevalence studies than in longitudinal incidence studies.

According to § 23 of the German Protection against Infection Act, hospitals in Germany are obliged to record and evaluate nosocomial infections. For reasons of economy, many hospitals often analyze the data for only one type of infection. Especially for large hospitals or for university hospitals with a particular focus, single-center prevalence surveys can be an important tool in the improvement of surveillance and other preventive measures. They highlight specific trends in the frequency of and risk factors for nosocomial infections relatively quickly and with low personnel costs. Our prevalence study showed the predominance of surgical site infections and gastrointestinal infections among the NI at a top-level university hospital with a focus on surgery.

Moreover, it emerged that antibiotic treatment and device use were strongly associated with NI. Patient safety can therefore be considerably improved by prevention of:

Based on the results of our survey, surveillance of surgical site infections and obligatory training for all members of staff involved in surgery at our institution commenced in 2011. Furthermore, an antibiotic stewardship program was set up to counter, among other things, C. difficile-related infections and the development of multiresistant pathogens. 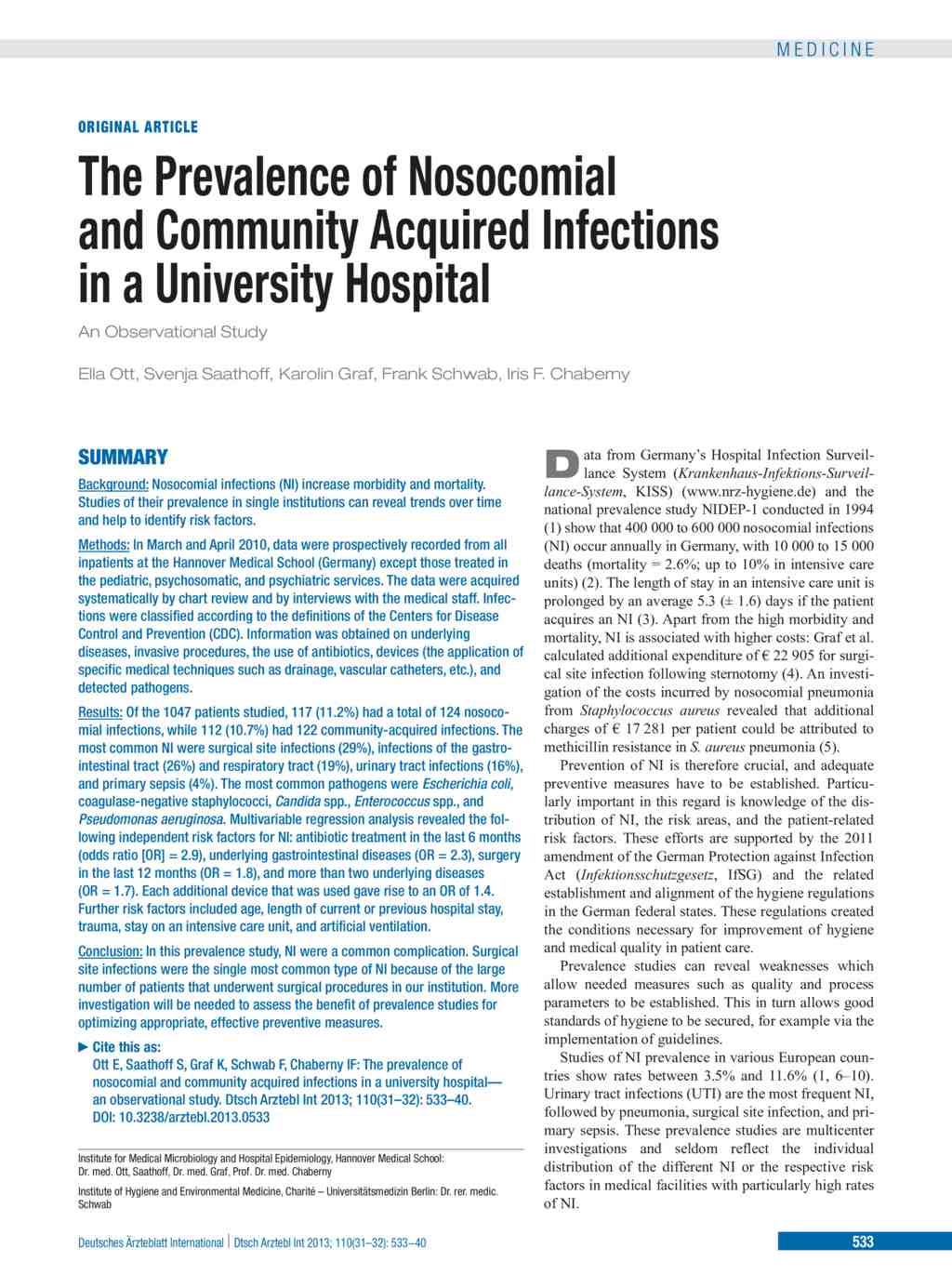