an Ever Present Challenge

Dtsch Arztebl Int 2013; 110(35-36): 573-4. DOI: 10.3238/arztebl.2013.0573
An editorial to accompany the articles “Does the pharmaceutical industry influence guidelines? Two examples from Germany” by Gisela Schott et al. and “Medical students' attitudes to and contact with the pharmaceutical industry—a survey at eight German university hospitals” by Klaus Lieb and Cora Koch, in this issue of Deutsches Ärzteblatt International

The primary interest of both physicians and patients lies in optimal medical care based on current scientific knowledge, with avoidance of harm. The ideal health-care system has:

Public opinion is sensitive to the risk of undue influence on physicians from third-party interests and from their own individual conflicts of interest. An ongoing, rational discussion of this risk is important if public confidence in the health-care system is to be sustained.

Schott et al. use publications about gabapentin to illustrate the selective reporting of scientific findings (1). Publication bias arising from the exclusion of large amounts of data and from misleading reporting of the design, performance, and evaluation of clinical trials, with preferential reporting of positive results, is not isolated to the single case of gabapentin, nor is it limited to research supported by drug companies (2–5). In affected fields, clinicians and authors of systematic reviews and guidelines may diligently study the available data, yet still risk drawing false conclusions from them despite their best intentions. Therefore, an essential requirement for the creation of systematic reviews and guidelines, for decision-making in health-care policy, and for the appropriate planning of future research is that all relevant documents from clinical trials should be freely available (5). Moreover, trial participants must be able to have confidence that their voluntary personal participation will lead to an increase of knowledge and medical progress. The enormous efforts that are now being undertaken to overcome publication bias—including searches in multiple sources for unpublished literature, author queries, funnel-plot tests in meta-analyses, and the restoration of abandoned trials from the available protocol data—cannot solve the fundamental problem (2–4). Schott et al. are justified in calling for an invigoration of independent research support as well as for the registration of all clinical trials and their findings.

Conflicts of interest among guideline authors

Schott et al. bring a further example—efalizumab for the treatment of psoriasis vulgaris—to illustrate the potential effects of conflicts of interest on the assessments of drug benefit that are found in guidelines (1). To avoid any misunderstanding, it should be stated at the outset that the mere existence of a conflict of interest need not automatically imply partiality or errors of judgment on the part of guideline authors. Schott et al. point out, however, that conflicts of interest must be recognized as a source of bias, and that steps must be taken to ensure that professional judgments and decisions are based on primary interests, without undue influence from secondary ones. Much has been achieved in this direction since the guideline studied by Schott et al. was published in 2006. A declaration of conflicts of interest from all guideline authors is now a standard requirement, as specified by the rules of the Association of Scientific Medical Societies in Germany (Arbeitsgemeinschaft der Wissenschaftlichen Medizinischen Fachgesellschaften, AWMF) (6). This declaration concerns all financial, academic, and personal interests that might cause a conflict. An evidence base for concrete strategies to deal with conflicts of interest still needs to be created (7). The member societies of the AWMF are now evaluating:

The measure of a guideline’s utility is the extent to which it improves medical care; before it can do this, of course, it must first be accepted and implemented. Thus, the profession itself should bear the responsibility for guidelines, as has become clear from the empirical findings of implementation research and quality assessment with guideline-based indicators (8, 9). Calls for independent institutions and guideline authors therefore seem misplaced.

Case reports can yield important clues, but they are not generalizable. Further examples make it clear that guideline authors are indeed sensitive to publication bias and sceptical about positive trial findings that contradict clinical experience (2). Thus, expert judgment is important in the critical evaluation of clinical trials. The risk of bias can be counteracted with protective factors that have been incorporated into the AWMF regulatory framework (2, 6), including the following:

Offers of information and outside influence

Lieb and Koch administered a structured questionnaire to 1151 medical students and found that the drug industry seeks contact with physicians early on in their careers (10). Many respondents said they considered the information offered by drug companies to be biased, but nevertheless useful. It is important, therefore, that rising physicians should be sensitized to the risk of influence, and even more important for them to learn how to evaluate all of the information they receive critically, according to the standards of evidence-based medicine, so that they can practice medicine with a proper scientific basis. In the area of continuing medical education, the current situation is satisfactory but still leaves room for improvement (11). The students’ openness to free informational material and the quantity of it that they accepted also remind us that providers of scientifically well-founded content must be able to maintain their competitiveness in the current “information market.” Two important aspects of this are attractiveness and accessibility (12). For many physicians in Germany, the need to pay for access to important sources of scientific knowledge, such as the Cochrane Library, is a major hindrance that could be overcome with publicly sponsored national licenses.

The articles by Schott et al. (1) and by Lieb and Koch (10) point to the need for an ongoing discussion of ways to deal with publication bias, conflicts of interest, and influences on the health-care system. The risk factors, protective factors, and available resources all need to be considered. Through their intensive efforts, the scientific medical societies are now producing important, high-quality guidelines. The essential next step is the implementation and evaluation of strategies for exploiting the available opportunities for improvement.

Conflict of interest statement
Prof. Kopp is an employee of, and receives institutional support from, the Association of Scientific Medical Societies in Germany (Arbeitsgemeinschaft der Wissenschaftlichen Medizinischen Fachgesellschaften, AWMF). 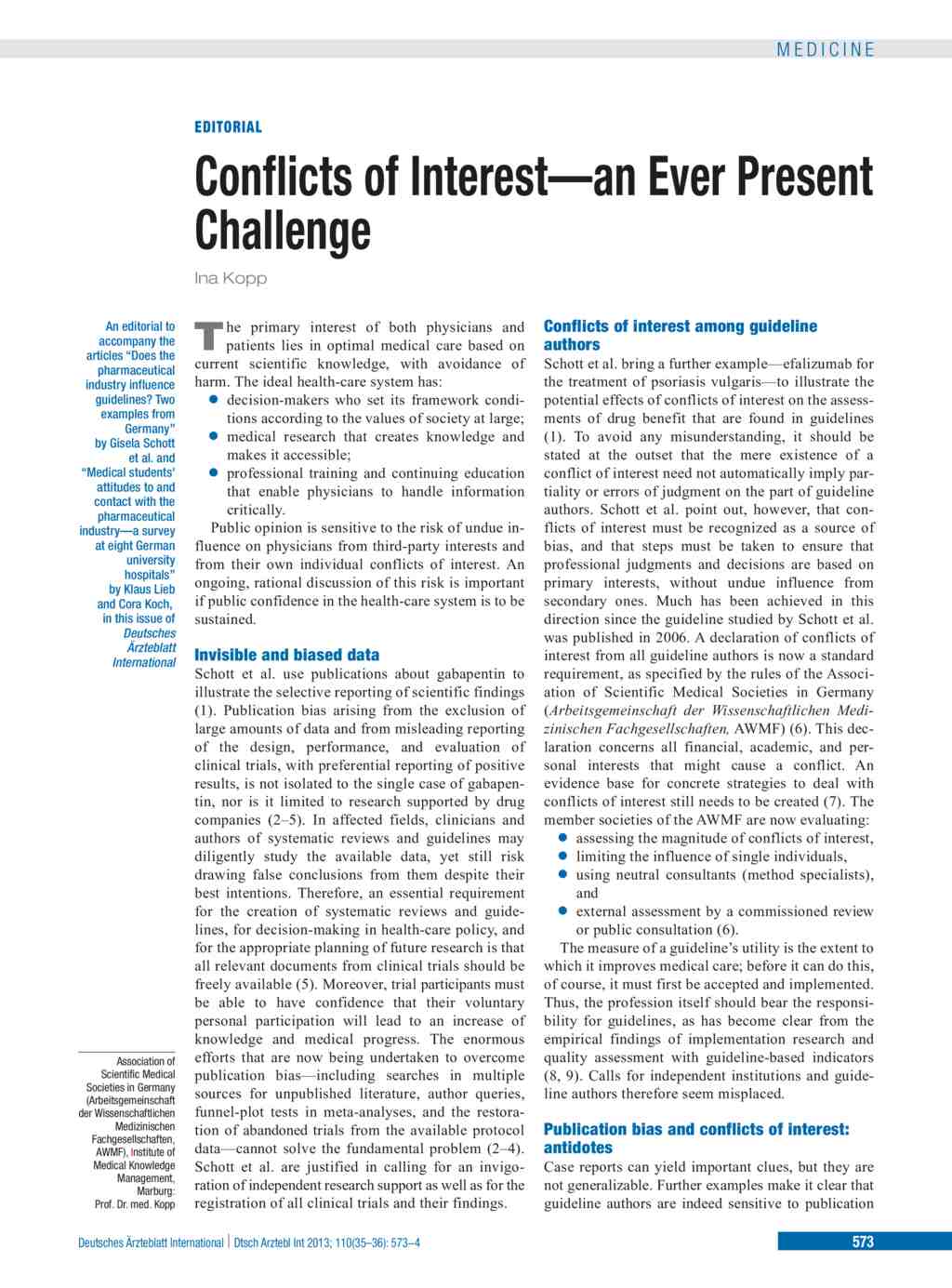