a Present and Future Challenge

Hospital-acquired, i.e., nosocomial, infections have aroused much public interest in recent years, yet reports in the media rarely betray any detailed knowledge of the subject. The common mode of depiction of nosocomial infections, centering on dramatic individual stories, is a major determinant of public opinion and often, regrettably, the opinions of political decision-makers as well. Two articles on nosocomial infections in the current Deutsches Ärzteblatt International are meant to give physicians the information they need for everyday clinical practice.

Infections in the hospital

Michael Behnke and coauthors report the findings of a new study on the prevalence of nosocomial infections and the use of antibiotics in German hospitals and compare them with the findings of the first German study, published in 1994 (1). They used a uniform protocol developed by the European Centre for Disease Prevention and Control (ECDC) to register the occurrence of infectious diseases; they collected cross-sectional data from a single day, relating to 41 539 patients in a total of 132 hospitals. The prevalence of nosocomial infections acquired during the current hospital stay was found to be 3.8%, while that of all nosocomial infections—including those acquired before the current hospital stay—was 5.1%. These figures were roughly the same as the 1994 figures (2). The most common nosocomial infections were wound infections (24.3%), urinary tract infections (23.2%), and lower respiratory infections (21.7%). The largest rise in infection rates was seen in diarrhea due to Clostridium difficile toxin, a disease linked to antibiotic use. Accordingly, it was found that the fraction of patients being treated with antibiotics on the day of the study was almost 45% higher than it had been in 1994.

Such studies, of course, have their intrinsic limitations. The ascertainment of nosocomial infections for purposes of the study had to be based on a small number of variables, as there would otherwise have been no way to assess data from such a large patient population; this may have led to either an underestimate or an overestimate of the true number of infections. Moreover, patient characteristics have changed markedly over the years. Hospitalized patients are now considerably older than two decades ago, and they suffer from a greater number of chronic conditions simultaneously than they did then, yet hospital stays are much shorter. Comparing 1994 with the present is thus less informative than it might seem.

The standardized ECDC protocol is valid for all of Europe and thus enables comparisons between countries. In the European figures that appeared in July 2013 (3), Germany came off relatively well in comparison to other countries, yet the lowest infection rates were seen, surprisingly, in Eastern European countries such as Romania, Slovakia, and Bulgaria, and in parts of the United Kingdom. One may doubt whether the participating hospitals were really representative of the overall situation in their respective countries. The Netherlands, known as an exemplary country for the prevention of infections, had higher infection rates than Germany did. The reason may be that a well-financed and well-staffed system of infectious disease epidemiology is simply better at detecting infections.

The increasing use of antibiotics

The marked increase in antibiotic use in German hospitals is the most worrisome finding in the study of Behnke et al. The increased prevalence of antibiotic-associated diarrhea is but one of the complications that can arise from increased antibiotic use; an even greater threat comes from increasing resistance to the main nosocomial pathogens, as has been observed in recent years. Increasing resistance is due not just to increased antibiotic use in hospitals, but also, and indeed mainly, to the frequent but often unnecessary prescribing of antibiotics in ambulatory care (4). Physicians probably overprescribe antibiotics because they are both afraid of leaving a potential bacterial infection untreated and unduly optimistic—as their patients are as well—about the therapeutic efficacy of antibiotics. Resistance develops because antibiotics are given when they are not indicated in the first place, and also because they are often used incorrectly even when indicated. As Behnke et al. show, so-called perioperative antibiotic prophylaxis, which is meant to prevent the dissemination of bacteria during surgery, is much too often continued long after the patient has left the operating room, even though no evidence whatever supports the long-term prophylactic use of antibiotics.

The guideline on nosocomial pneumonia

In Germany, the medical profession’s involvement with infectious disease is cross-sectional: All medical specialties participate to some extent, but none regards infectious disease as its primary concern. There is no structured training in the diagnosis, treatment, and prevention of infectious disease, either in medical school, or in residency training, or in continuing medical education. Evidence-based guidelines thus take on major importance for the everyday practice of physicians who work in hospitals. High-quality scientific evidence on the treatment of nosocomial infections is lacking, however, because trials are hard to carry out on intensive-care patients and other very ill patients, for a variety of reasons including the heterogeneity of patient groups and the patients’ inability to consent. As a result, most guidelines on the treatment of nosocomial infections are out of date. The most recent previous guideline on the treatment of nosocomial pneumonia was published in 2005. Now, in the current issue of this journal, Dalhoff and Ewig present the main contents of the new German guideline on nosocomial pneumonia, created with the participation of all medical specialty groups that are involved in this field and based on evidence of the highest possible level (5). This guideline takes positions on all the main questions about nosocomial infections and contains recommendations for clinical practice even in areas where adequate evidence is currently lacking. It should surely be seen as the most up-to-date and comprehensive guideline on this topic now available anywhere in the world.

Nosocomial infections will never be entirely avoidable; indeed, in all likelihood, good preventive measures will still fail to prevent most of them. The standardized, methodologically sound assessment of their prevalence by Behnke et al. and the guideline on nosocomial pneumonia presented by Dalhoff and Ewig, which shows how the available evidence can best be implemented in clinical practice, are exemplary publications illustrating how the problem of nosocomial infections should be dealt with in the light of current scientific knowledge. 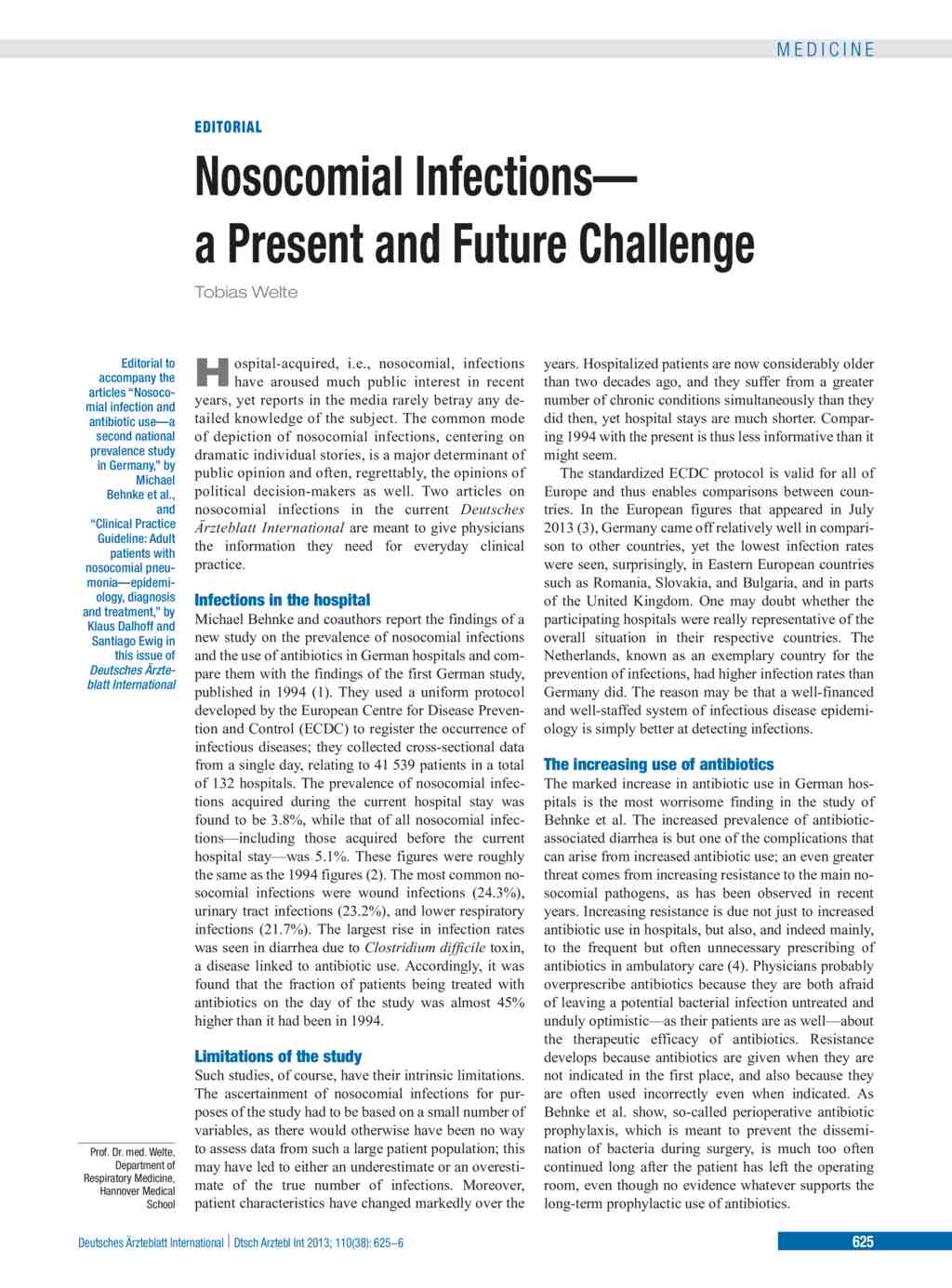