Dtsch Arztebl Int 2013; 110(40): 661-2. DOI: 10.3238/arztebl.2013.0661
An editorial to accompany the articles „Comprehension of the description of side effects in drug information leaflets— a survey of doctors, pharmacists and lawyers“ by Andreas Ziegler et al. and „Study of perceptions of the extent to which guideline recommendations are binding—a survey of commonly used terminology“ by Alexander Nast et al. in this issue of Deutsches Ärzteblatt International

There is a 70% chance of rain tomorrow.” What does that mean? What are the consequences of that statement for your decision making? Will you take an umbrella with you tomorrow or not?

People interpret statements of this kind in very different ways. Some think that it will rain for 70% of the time, others that it will rain in 70% of the area (1). What the statement actually means is that, when the weather conditions are like today, in 7 out of 10 cases there will be rain the next day.

A product of existing knowledge

In the clinical context, too, probabilities and other information relevant to decision-making is usually transmitted in words, whether spoken or written. Psychological research shows that understanding this kind of information is a constructive process. The subjective representation—that is, the way the information given is represented in the recipient’s imagination—is never an ideal representation of reality, but always partly a result of his or her existing knowledge (2).

The following original articles are concerned with how recipients understand guideline recommendations (3) and the risks of side effects of medical drugs (4). Guideline recommendations and drug side effects both convey information that in theory constitutes central criteria for decision making. According to the theory of rational choice, decisions about action must reflect the value of the consequences of alternatives and their respective weighting (5). In the case of risky decisions, it is the probabilities of the consequences that constitute this weighting. In addition, theories of action postulate that norms also play a part in the decisions (6).

The risks of drug side effects (4) relate to the probability with which administration of a drug will be followed by negative consequences. Formally, they should be taken into account in the weighting of the assessment of these consequences. With guideline recommendations (3), the question is obviously one of conveying a norm. Formulations such as “must be done” and “must not be used” express imperatives and prohibitions. However, other formulations reported by the authors are subject to interpretation on the scale of value. “Can be recommended” suggests that the communicator is relying on a positive evaluation of the drug.

In their articles, the author provide convincing empirical evidence that, among medical professionals (and other groups), the subjective representation of these decision criteria diverges strongly from the information provided.

The Federal Institute for Drugs and Medical Devices (BfArM, Bundesinstitut für Arzneimittel und Medizinprodukte) defines “frequent” as a probability ranging between 1% and 10% with which a given side effect occurs after drug administration. Medical professionals, on the other hand, tend to interpret “frequent” as a high probability (median = 75%) (4). Describing the risk of a side effect in the context of a surgeon's daily routine leads to a reduction (median = 60%), but not disappearance, of this overestimation.

Nast et al. (3) demonstrate that the auxiliary or modal verbs “must,” “should,” and “can” (and their negations) are subjectively interpreted very differently in terms of how binding they are perceived to be. Whereas statements such as “must be done” and “must not be used” are interpreted with low variance as binding, the variance in the perceived level of obligation (or “bindingness”) of, for example, “can [not] be recommended” is very high. However, it cannot be clearly determined whether this effect is due to the differences between the modal verbs or the main verbs. “Must” and “must not,” because they are combined with the main verb “to use,” refer semantically to the action and its normative status. On the other hand, “can” in combination with the main verb “ to recommend” refers semantically to an underlying evaluation.

It is important at this point to note that erroneous representation of decision criteria is by no means typical only in medicine. The findings of the studies by Nast et al. (3) and Ziegler et al. (4) join a well established set of findings about errors that repeatedly escape most people in their decision making (5). In addition, the results of Ziegler et al. (4) converge with those from psychological research into the understanding of statements about probability (7–9).

No doubt it is too early to attempt to put forward a plan of action. However, a few suggestions spring to mind.

Tightening up the language

In the case of guideline wording, criteria become merged. In wording guidelines, care should be taken to refer only to the norm, not to the evaluation dimension (e.g., through stereotypical use of the action-related verb “use”).

Psychological research shows that the way in which information is formulated in language partly determines how decision makers interpret and represent that information (10). What appears to us subjectively as a lot or a little, or as probable or improbable, depends in part on what standard for comparison is offered by the situation (11).

In the case of the risks of drug side effects, the highest communicated risk has a value around 10%. In the recipient’s mind this value becomes the endpoint of the scale and thus subjectively becomes a high risk. However, the objective scale goes up to a value of 100%. If the risks of side effects are put onto the complete scale, the subjective standard for comparison is changed. Thus, the drug information leaflet could explain that high risks lie in the upper quarter of the scale (75% to 100%), but that so far as side effects are concerned, the risks are only comparatively small, lying in the lower region of the scale. This draws the upper region of the objective scale into focus as the standard for comparison, which would promote more appropriate classification and assessment by the recipient of the regions of risk that are lower than 10%.

In every area of language, words are associated supraindividually with certain meanings and associations (“word norms”). Thus, in everyday usage, “frequent” refers to a high frequency of occurrence. To that extent, the empirical evidence on the subjective meaning of decision criteria, as impressively shown in the following articles, should be more strongly taken into account in the wording of information and recommendations. Specifically, this means that it is counterproductive to communicate small risks in terms that in everyday usage indicate a large risk, while, similarly, normative guidelines should employ wordings that indicate norms in everyday usage as well.

Recipients’ existing knowledge should, however, not just be taken into account: it should be systematically developed further. We already have methods available that, for example, promote thinking in probabilities (1, 12). Both the academic training of physicians and continuing medical education courses offer opportunities for the targeted use of development measures. 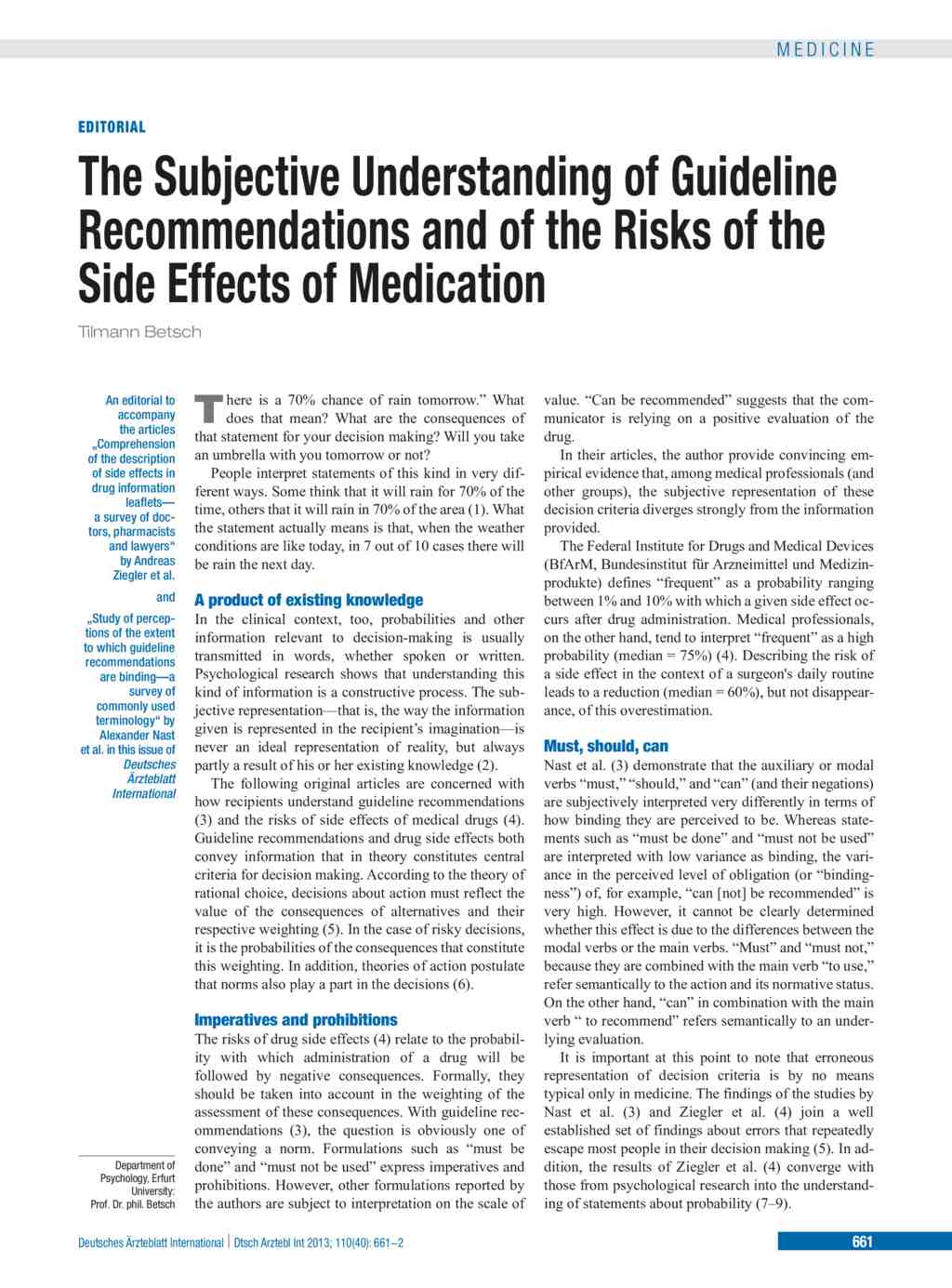