Comprehension of the Description of Side Effects in Drug Information Leaflets

A Survey of Doctors, Pharmacists and Lawyers

Background: The German Federal Institute for Drugs and Medical Devices (Bundesinstitut für Arzneimittel und Medizinprodukte, BfArM) states that it uses standardized terms to describe the probabilities of side effects in drug information leaflets. It is unclear, however, whether these terms are actually understood correctly by doctors, pharmacists, and lawyers.

Methods: A total of 1000 doctors, pharmacists, and lawyers were questioned by mail, and 60.4% of the questionnaires were filled out and returned. In the absence of any particular, potentially suggestive context, the respondents were asked to give a numerical interpretation of each of 20 verbal expressions of probability. Side effects were the subject of a hypothetical physician-patient case scenario. The respondents were also asked to give percentages that they felt corresponded to the terms “common,” “uncommon,” and “rare.” The values obtained were compared with the intended values of the BfArM.

Results: The results obtained from the three professional groups resembled each other but stood in marked contrast to the BfArM definitions. With respect to side effects, the pharmacists matched the BfArM definitions most closely (5.8% “common,” 1.9% “uncommon” and “rare”), followed by the physicians (3.5%, 0.3%, 0.9%) and the lawyers (0.7%, 0%, 0.7%). When the context of the side effects was not mentioned, the degree of agreement was much lower.

Conclusion: Statements about the frequency of side effects are found in all drug information leaflets. Only a small minority of the respondents correctly stated the meaning of terms that are used to describe the frequency of occurrence of side effects, even though they routinely have to convey probabilities of side effects in the course of their professional duties. It can be concluded that the BfArM definitions of these terms do not, in general, correspond to their meanings in ordinary language.

Conveying probabilities of medical events is an important part of doctors’ daily communication. Patients must be informed, for instance, of their probability of cure or of specific side effects. Specialists in related disciplines are also required to perform these tasks; explaining potential risks and side effects of treatments and drugs is therefore part of pharmacists’ and doctors’ day-to-day professional lives. Courts, meanwhile, deal with the probability of treatment errors or occupational health risks and the illnesses or payments associated with them.

However, it remains unclear how the probabilities of particular events can be discussed in a comprehensible way. There are essentially three possible methods of representing probabilities. Visschers et al. provide an up-to-date oversight (1).

Studies have shown, however, that terms used to denote probabilities are interpreted differently by different individuals. The range of probabilities associated with such terms is therefore very broad (4–6), sometimes more than 80%. In addition, linguistic interpretation also depends distinctly on the characteristics of the person asked (e.g. age, severity of disease) and the context in which a term is used (7).

Comprehension and misunderstanding come into play directly, in particular, when probabilities of side effects are conveyed orally. If the risk is subjectively assessed as high, this has a negative effect on treatment adherence (8). Because of this, and because of the difficulties described above, there have long been calls for a single set of terms to be developed, allocating probability figures unambiguously to the verbal terms used (4). In 1997, this led to the standardized set of probability terms established by the European Commission (EC) Pharmaceutical Committee, adopted in 1999 in the Summary of Product Characteristics (SPC) (9). Germany’s Federal Institute for Drugs and Medical Devices (BfArM, Bundesinstitut für Arzneimittel und Medizinprodukte) has adopted this system. For example, its Package Insert Recommendations (Empfehlungen zur Gestaltung von Packungsbeilagen) unambiguously allocate probability figures and proportions to the five terms “very common,” “common,” “uncommon,” “rare,” and “very rare” in the context of side effects (10).

Multiple studies have already shown that verbal expressions are not interpreted correctly, leading the general population to overestimate the risk of side effects (11–16). This is also true when proportions are provided in addition to verbal expressions of probability (17). In English-speaking countries, these effects have been described in both patients and doctors (17). In contrast, in German-speaking countries comprehension by specialists working in medicine-related fields has not yet been sufficiently researched.

This study therefore aimed to ascertain doctors’, pharmacists’, and lawyers’ interpretation of terms used to describe probability and their knowledge of the system established by the BfArM.

The study participants were doctors, pharmacists, and lawyers. They were interviewed using surveys. Only doctors specializing in anesthesia or internal medicine were included, as these are fields in which pharmaceuticals are used very frequently. Sociodemographic information gathered included sex and age. The questionnaire (in German) is available as supplementary material (eQuestionnaire).

Two of the survey questions (Boxes 1 and 2) are examined in more detail below:

The researchers had access to address databases covering the medical associations of the German federal states of Schleswig-Holstein and Bavaria, the pharmacists’ and bar associations of Schleswig-Holstein, and the Lawyers’ Handbook. A total of 600 doctors, 200 pharmacists, and 200 lawyers were selected from these at random, and surveys were sent to them at two points during 2004 (18, 19).

Age and sex are described for each professional group. The median and quartiles of the percentages with and without context are presented for each group. Finally, the number of survey respondents who had given percentages that were in line with the system established by the BfArM was recorded.

Table 2 compares the numerical probabilities associated with the terms “common,” “uncommon,” and “rare” according to the BfArM and the figures stated in this study.

Deviations were greater without the context of side effects: Lower, and therefore more nearly accurate, values were stated in context.

Standardization of terms used to denote probability has been recommended in many studies, and some proposals have been developed as a result (4, 21). The BfArM has published an official guideline for use of the terms “very common,” “common,” “uncommon,” “rare,” and “very rare” in relation to side effects (10). This defines these terms clearly. The guideline has become an integral part of every drug information leaflet.

However, this study has shown that these expressions are not understood correctly even by those who work in medicine-related fields. Few of those surveyed allocated correct percentages to the terms “common,” “uncommon,” or “rare” in the context of side effects. For example, the term “common” is defined as a range of 1% to 10%, but the average frequency stated by doctors was 60%. This demonstrates that they did not know the correct numerical interpretations. This was true for all the groups researched: Doctors, pharmacists, and lawyers all allocated incorrect figures to the expressions of frequency in drug information leaflets. In other words, the results of studies in the general population (16) and those in English-speaking countries (17) can be extrapolated to specialists in medicine-related fields in German-speaking countries.

Overestimating the risks of side effects has already been shown to make patients more likely not to take a drug (8). It can be deduced from the results presented here that the problem may be even more far-reaching, because the probabilities of side effects are overestimated even by those whose job it is to inform others of them. We therefore conclude that the term definitions established by the BfArM do not correspond to everyday use. 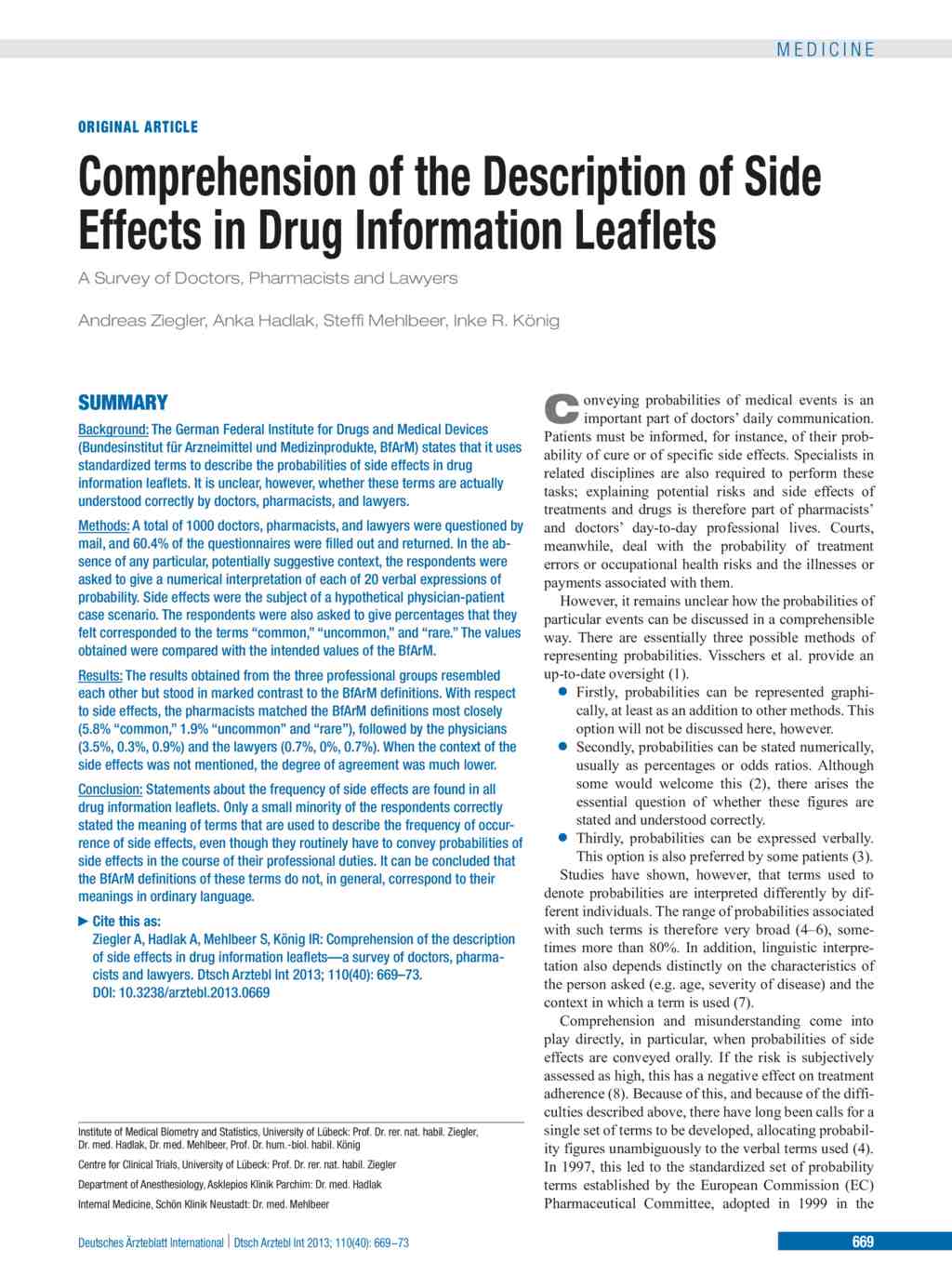