The primary objective of the study—to clarify whether PRISCUS list medications are more commonly associated with adverse drug reactions (ADRs) than other medications—has been confirmed by the authors. But this seems not convincing due to the questionable primary goal, the prefered study design and some classifications being missing or misleading.

Regarding the primary goal of the study: If the intention had been to provide an answer to the primary question it would have sufficed to study the frequency and severity of ADRs after administration of PRISCUS drugs (PDs) versus non-PRISCUS drugs in patients older than 65 with identical indications. In addition to the over-65s (n=351) however, 401 subjects younger than 65 were included. If the intention was to find an answer to the question of whether PDs are less well tolerated by older patients than by younger patients, then this comparison would have been the correct one to confirm the statement that older patients react more sensitively to PDs than younger ones—the indication being the same, obviously.

Regarding the study design: The authors favored accidentally collected data from a cohort of patients in an emergency unit over a prospective, randomized controlled comparative study. The populations (under comparison) were of different sizes and inhomogeneous: in patients aged 65 or older, the most commonly observed disorders were circulatory disorders (35%) and gastrointestinal disorders (10.5%); In patients younger than 65, circulatory disorders were present only in 17.7% of cases, and psychological/behavioral disorders occurred in 10.2%. This means that medication therapy would be different in both compared groups, something that was not explained anywhere in the article. In total, only 149 patients with ADRs were evaluated.

Regarding the classification: Medication errors (caused by the physician or non-compliance) cannot be subsumed into ADRs. In order to classify ADRs, information on severity/risk is required, especially for the comparison between PRISCUS drugs and non-PRISCUS drugs. The category “unexpected ADRs” is lacking. Did such reactions not occur?

Of interest, albeit uncommented, is the fact that in the patient population under study, medication errors occurred in more patients (n=166) than adverse drug reactions (n=149). A further surprising result (disconcerting aspect) is (in) the drastic increase in medication errors in 90 patients between the age of 70 and 89.

In conclusion: Medication therapy will have to be improved, especially for populations at risk. 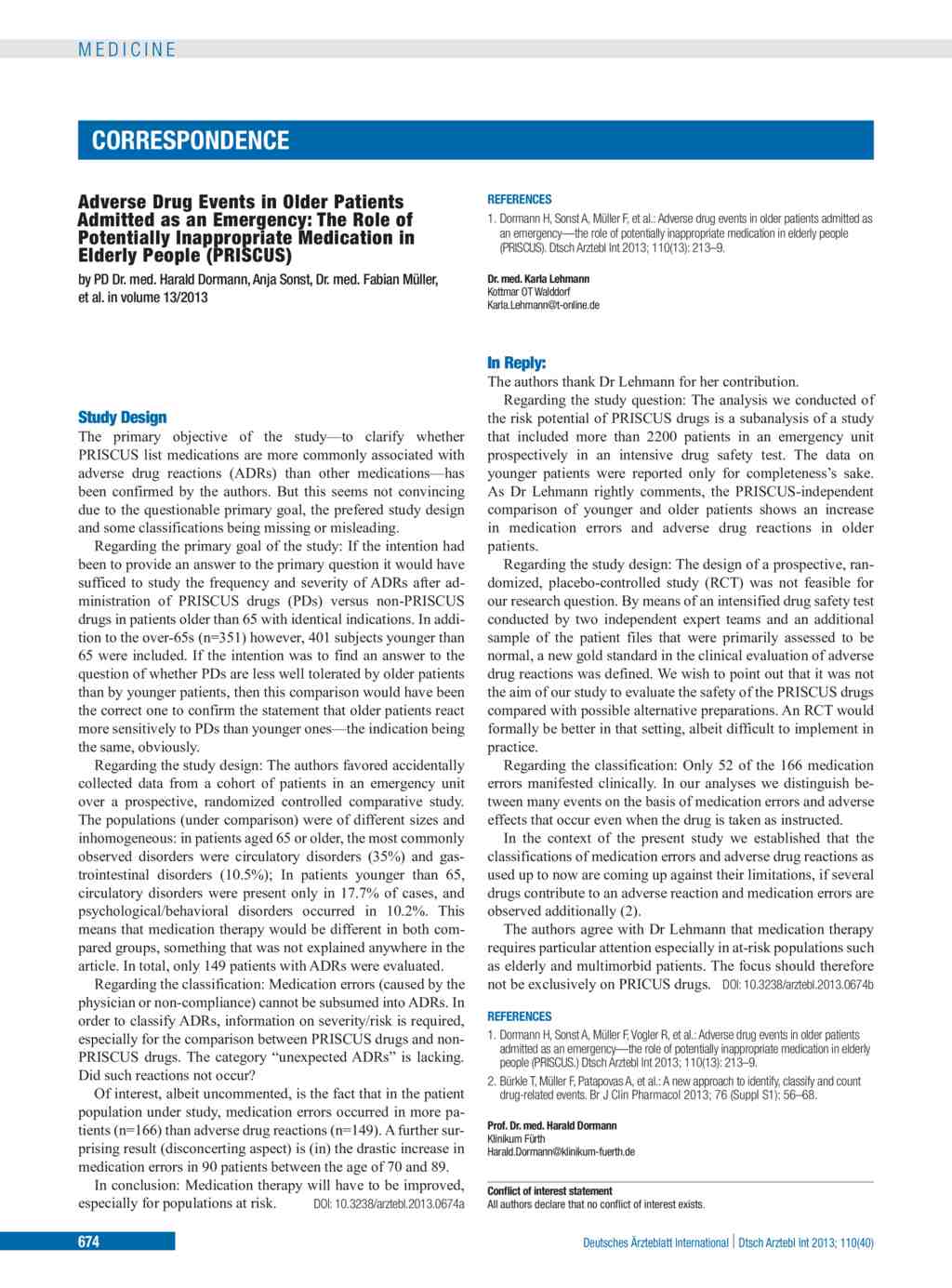