We thank Dr Kuhnle for his interesting comments on dietary treatment in pancreatitis. It has, indeed, been shown that alcohol abstinence and successful smoking cessation notably slow the progression of chronic pancreatitis and therefore make therapeutic sense. Restrictive diet regimens have, however, completely lost their clinical relevance. It is neither appropriate to prescribe a low fat diet, nor has any benefit of a blockage of pancreatic secretion by means of proton pump inhibitors or specific diets been shown. The critical factor remains to assure adequate fat digestion by substituting sufficient lipase activity via pancreatic enzyme replacement therapy with pancreatin. Patients with chronic pancreatitis may eat whatever they like and tolerate, as long as adequate intake of fat-soluble vitamins and trace elements is guaranteed.

Assumptions about the health effects of coffee drinking have changed considerably in recent years. Coffee consumption has been found to not only have a beneficial effect on hepatic fibrosis, which has parallels with pancreatic fibrosis (1), but a recently published meta-analysis based on data from 678 000 individuals has shown that regular, especially heavy, coffee consumption can lower the risk of pancreatic cancer by 30% (2).

We also thank Dr Häuser from Saarbrücken for his comment, which is entirely correct, and states that levopromazine is a low-potency neuroleptic (antipsychotic) and not a tricyclic antidepressant. It is used empirically in chronic pancreatitis patients with pain, although this usage is not supported by results from controlled trials.

On the other hand, a recently published randomized controlled study investigated analgesic treatment in pancreatitis with pregabalin, a GABA analogue used for neuropathic pain (3), as correctly pointed out by Dr Häuser. This study by Olesen et al. only appeared after the guidelines had been completed and showed effective pain reduction only in one-third of patients with chronic pancreatitis. Since no comparison was done with classic pain treatment as recommended by the WHO scheme, the importance of pregabalin in the treatment of pancreatic pain remains presently unclear.

An evaluation of the differential cause of pain in pancreatitis, as suggested by Dr Häuser, makes complete sense and is recommended in the guideline. The misuse of opioids prescribed for pain in chronic pancreatitis is much rarer, in our opinion, than commonly assumed (4). Direct comparison with neighboring countries indicates that in Germany opioid analgesics tend to be prescribed too rarely, rather than too often. In chronic pancreatitis endoscopic or surgical therapeutic approaches for pain treatment should be considered whenever conservative pain treatment fails or in patients with suspected opioid misuse.

Prof. Lerch has served as a paid consultant for Roche, Abbott, Falk, and Aptalis. He has received reimbursement of scientific meeting participation fees and travel expenses from Roche, Abbott, Menarini, and Falk. He has been paid by Roche, AstraZeneca, Reccordati, Menarini, Abbott, Falk, and Aptalis for preparing continuing medical education presentations. He has received financial support in an external-funding account for conducting clinical trials on behalf of AstraZeneca, Abbott, Menarini, Solvay, Roche, and Sanofi-Aventis. He has also received financial support in an external-funding account from AstraZeneca, Metanomics, Roche, Abbott, Solvay, and SanofiAventis for investigator initiated research projects. 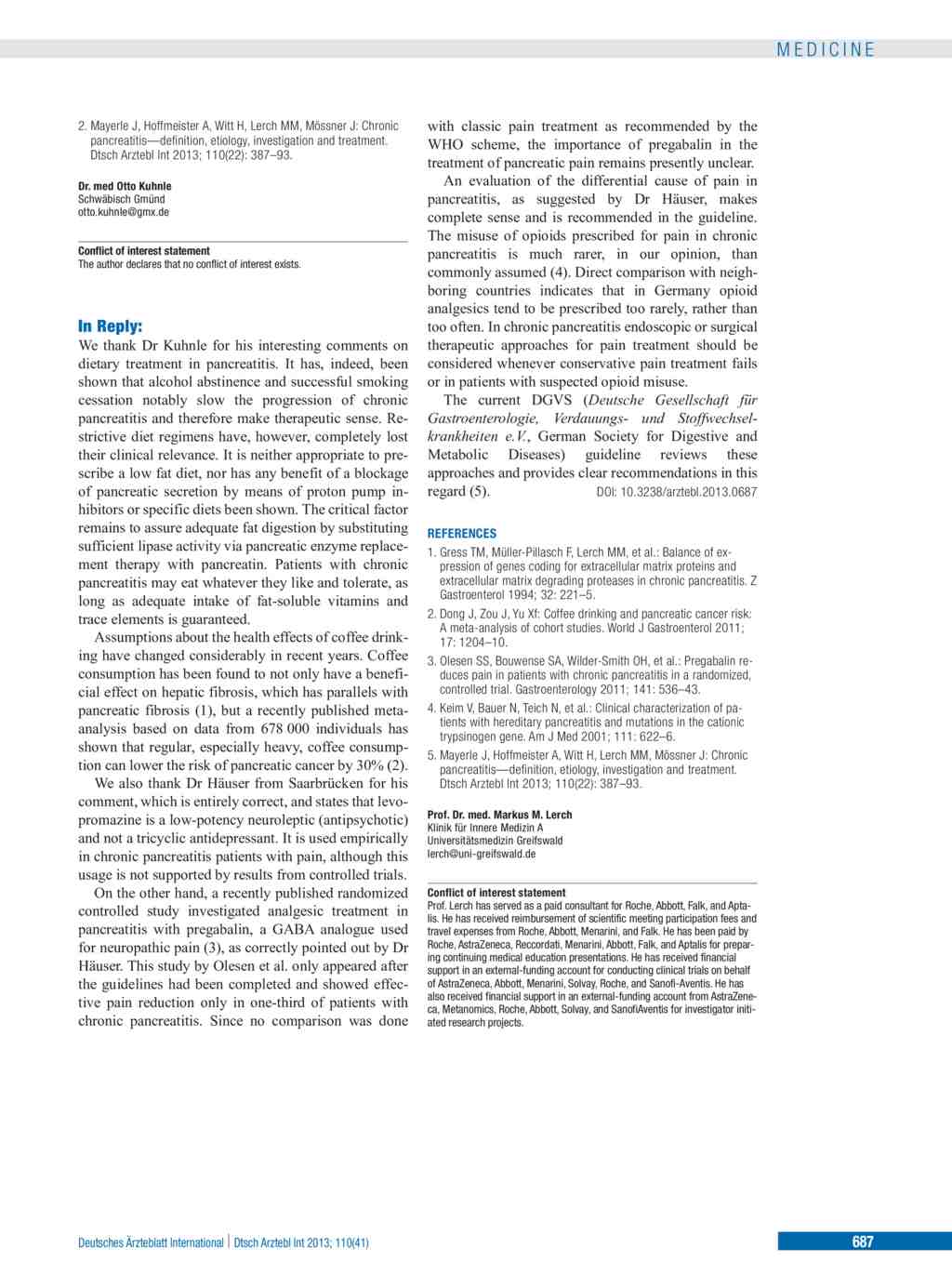