Osterholz-Middendorf mentions a very relevant aspect in routine clinical practice: recurrences of benign paroxysmal positional vertigo (BPPV, which occurs in 50%) and the identification of the affected side by patients themselves. It is important to determine the side because the liberatory maneuvers for the right and left side mirror each another. The simplest measure seems to us that the patient performs steps 1 and 2 of the Semont maneuver for both sides. If this is correctly executed then the patient can determine the affected side in BPPV of the posterior semicircular canal as only lying down on this side will trigger vertigo. Afterwards the patients themselves can perform the liberatory maneuvers.

We thank Schaaf for his critical comments. The authors are aware of current studies of the treatment of Menière’s disease with betahistine, gentamycin, or saccotomy. Meta-analyses for betahistine so far have, however, only included low daily doses. Observational studies and clinical experience in several thousands of Menière’s patients worldwide have shown that a dose of 144 mg per day and long-term therapy of at least 12 months is effective in a minimum of 90% of patients, which means that the treatment we suggested is actually used in many European countries and in the United States.

The effectiveness of transtympanic gentamycin therapy has been confirmed (1). Because of the good therapeutic effects of betahistine and its good tolerability [intravenously, even plasma concentrations are tolerated that are 100 times higher (unpublished phase 1 study)], in the past four years no patient was treated with gentamicin in our outpatient clinic with 5000 patients per year; especially since the use of gentamycin is a destructive procedure that worsens the balancing function and can deteriorate patients’ hearing, and cannot be used in patients with bilateral Menière’s disease.

In conclusion: the recruitment for a placebo controlled multicenter study seeking to establish the correct dosages, which is funded by the Federal Ministry of Education and Research (Bundesministerium für Bildung und Forschung, BMBF), which is using 3 × 16 versus 3 × 48 mg betahistine/day (BEMED), was completed on 13 November 2012, with 221 patients; initial results are expected for mid-2014.

As a geriatrician, Rösler will certainly see many patients with chronic postural vertigo, a problem that will increase in relevance in the future. Bilateral vestibulopathy as a most important cause of a sensory deficit in older persons with postural vertigo is mostly underrated in terms of its importance and is often not even diagnosed. This is mainly caused by premature ageing of the function of the vestibular organs (2), similar to age-related hearing loss. The head impulse test and a caloric reflex test help make a diagnosis; in individual cases the function of the otolith organs will have to be examined by testing vestibular evoked myogenic potentials, as isolated deficits can occur (3). Other causes of sensory deficit, such as polyneuropathy or impaired vision, are notably overrated. The same is true for subcortical vascular encephalopathy, orthopedic problems, or medications. The disorders mentioned earlier can be considered as causes only once vestibular disorders have been safely excluded.

Eichhorn in his letter mentions somatoform vertigo, a very important form of vertigo. This can be the primary pathology, without preceding or accompanying physical disorders, or a secondary pathology, as the result of a physical vertigo syndrome or in parallel to one, especially in chronic recurring forms such as vestibular migraine, Menière’s disease, or vestibular paroxysmia. In order to do justice to such patients in terms of diagnostic categorization and therapy, we are collaborating clinically and scientifically closely with the psychosomatic clinic in Munich’s university hospital Klinikum rechts der Isar (C Lahmann, P Henningsen) (4), as well as with Ms Eckhardt-Henn in Stuttgart, and we have established a special clinic. We agree with Eichhorn that pharmacotherapy alone is mostly not sufficient and often, psychotherapeutic or cognitive-behavioral therapeutic treatment is required. We do not, however, agree with the statement that Menière’s disease is a psychosomatic disorder.

He has received payments from Abbott, Biogen Idec, CSC, Henning Pharma, and GSK for preparation of scientific training courses. 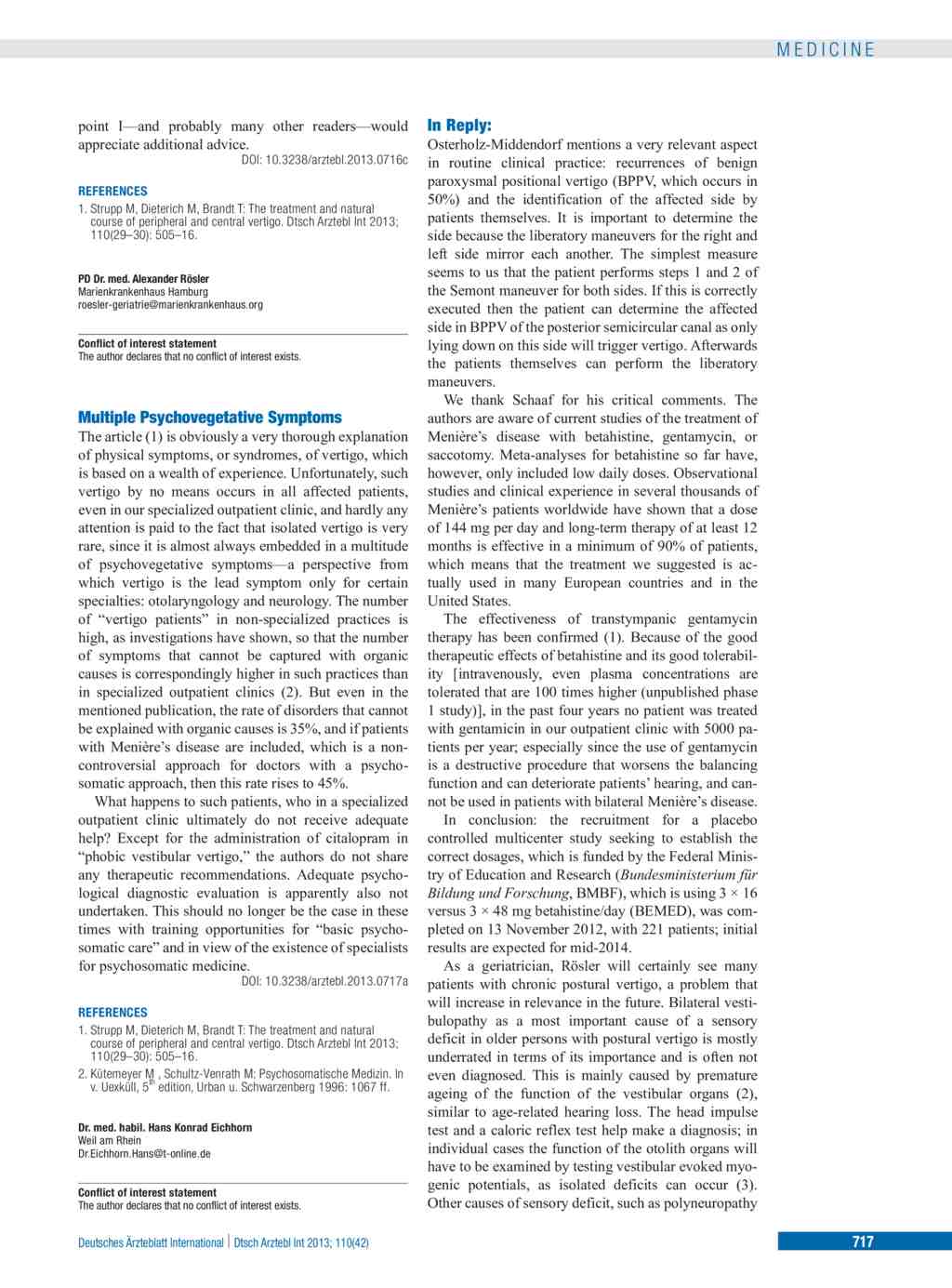