Background: Alcohol-related aggression and violence are a widespread cause of personal suffering with high socioeconomic costs. In 2011, nearly one in three violent acts in Germany was committed under the influence of alcohol (31.8%). The link between alcohol consumption and aggression is promoted by various interacting factors.

Methods: In this review, based on a selective search for pertinent literature in PubMed, we analyze and summarize information from original articles, reviews, and book chapters about alcohol and aggression and discuss the neurobiological basis of aggressive behavior.

Results: Aggression is promoted both by the cognitive deficits arising in connection with acute or chronic alcohol use and by prior experience of violence in particular situations where alcohol was drunk. Only a minority of persons who drink alcohol become aggressive. On the other hand, alcohol abuse and dependence together constitute the second most commonly diagnosed cause of suicide (15–43%). Current research indicates that the individual tendency toward alcohol-induced aggression depends not just on neurobiological factors, but also on personal expectations of the effects of alcohol, on prior experience of violent conflicts, and on the environmental conditions of early childhood, especially social exclusion and discrimination. Gene–environment interactions affecting the serotonergic and other neurotransmitter systems play an important role. Potential (but not yet adequately validated) therapeutic approaches involve reinforcing cognitive processes or pharmacologically modulating serotonergic neurotransmission (and other target processes).

According to the World Health Organization, alcohol consumption is associated with aggressive behavior more closely than the use of any other psychotropic substance (e1). The relationship between alcohol consumption and aggressive behavior has been well documented in epidemiological studies. Alcohol-related aggression results in considerable personal suffering and socioeconomic costs every year. For example, reviews have shown that acute alcohol intoxication plays a deciding role in approximately half of all violent crimes (e2) and sexual assaults (e3) worldwide. In addition, statistics show that the prevalence of alcohol-related aggression, particularly murder, in the USA has increased over the last 50 years (e4). In Germany, one-third of all violent acts are committed under the influence of alcohol: of 148 266 solved violent crimes in 2011, 47 165 (31.8%) were perpetrated under the influence of alcohol, particularly serious and dangerous injury (1). In the USA every year, the victims of approximately 3 000 000 violent assaults report that the perpetrator was under the influence of alcohol (e5). Alcohol also plays a key role in approximately 32% of all murders in the USA (e6).

In view of the high prevalence of alcohol-related violence, scientists and clinicians have undertaken numerous attempts to analyze this problematic relationship and to clarify underlying mechanisms and processes. Both clinical observations and scientific data have shown that the manifestation of alcohol-related aggression is by no means uniform. Rather, it is becoming clear that individual differences play a key role. In addition, more recent models are moving away from single-factor causes and towards multifactorial sets of conditions. In the following, these models will be described and discussed on the basis of a selective review of original articles, reviews, and book chapters.

Why do only some individuals become aggressive under the influence of alcohol?

One empirically well researched model to explain the origin of aggressive behavior under the acute influence of alcohol refers to the effect of alcohol on cognitive functions. In this context the impairment of a number of cognitive variables are associated with an increased manifestation of alcohol-related aggression, though in all individuals with alcohol consumption, not only those who are alcohol-dependent (3). These variables include the following:

Social learning, e.g. experiences with friends or relatives who exhibit aggressive behavior under the influence of alcohol, plays a key role in the onset of alcohol-related aggression.

Graham’s disinhibition hypothesis (1980) postulates that alcohol affects the function of the areas of the brain that are associated with inhibition and behavior control (4) (Box). According to the hypothesis, alcohol promotes aggressive behavior by affecting self-regulation, attention, information processing, and decision-making. In addition, when intoxicated the individual’s focus of attention becomes narrowed (this is known as alcohol myopia [5]), like a camera that shows only a small part of the scene in sharp focus. This plays a role in social contexts such as when, for example, being bumped into in a bar is interpreted as a supposed attack, whereas potential aggression-inhibiting interpretations, such as considering that it was inadvertent or taking into account the long-term consequences of aggressive behavior, are perceived as being less significant (e11). In addition, the influence of alcohol can lead to ambiguous social interactions being perceived as hostile (“hostile attribution bias”, HAB [6]).

Box
What can neurobiology contribute?
Enlarge All figures

But why do only some individuals become aggressive under the influence of alcohol? Social learning theories discuss multiple factors: expectations of effect associated with alcohol consumption (“alcohol outcome expectancies,” AOEs [7]) play a deciding role. These are stored as memory schemata and activated when alcohol is consumed. Occasional drinkers’ expectancies are characterized by sedative effects, and heavy drinkers’ by a positive, arousing effect (e12). It may be such AOEs that lead to violent behavior in intoxicated individuals, particularly when this has been experienced many times in the past. AOEs are measurable even in preschool children with no personal experience of alcohol; this indicates early social learning experiences (8, e13), e.g. learning from an example in the family, among friends, or via the media.

Further individual factors associated with an increased probability of alcohol-induced aggression are as follows:

Maladaptive reasons for drinking, such as drinking as a coping mechanism (e18), and the assumption that aggression is an acceptable form of social interaction (e19), also play a major role.

Finally, neurobiological research also refers to individual differences that may explain an increased predisposition to alcohol-related aggression as an interaction between genetic markers and environmental influences (Box).

The relationship between chronic alcohol consumption and aggressive behavior

Alcohol-related aggression also often occurs in a context of chronic alcohol consumption and dependence. Various studies have estimated that up to 50% of alcohol-dependent men display violent behavior (between 16% and 50%, depending on age and the degree of severity of violence investigated) (e7–e9). When compared to controls with no alcohol abuse, the risk of being involved in violence is five times higher in people with detrimental alcohol consumption (10, e20, e21). A longitudinal study in young persons showed that increased alcohol consumption and the incidence of symptoms of dependence were associated with an increased degree of violence (increased alcohol abuse was significantly [p<0.0001] associated with violent crime and crimes against property) (11). In this context, the ever-increasing binge drinking among young persons is a further factor (e22). Even a single episode of binge drinking can be accompanied by aggression, a violent attitude, and injury (e23–e26).

Another interesting issue is self-harm and suicide. In a study by Haw et al. (2001), 150 patients who presented deliberate self-harm were recruited from the population of a general hospital on a representative basis. Forty of these patients presented alcohol abuse or dependence (e27). Alcohol dependence or abuse is the second most common psychiatrically diagnosed cause of suicide, after depression (e.g. [e28]: 15%; [e29]: 43%; [e30]: 43%).

However, alcohol-related aggression does not occur in the majority of all chronic alcohol consumers or all alcohol-dependent individuals.

Studies into the development of alcohol-related violence over time in problem drinkers have shown that the occurrence of aggression is increased following heavy, acute alcohol consumption. Two studies in prison inmates have reported that acute alcohol consumption occurring in the context of arrest correlated with an increased likelihood of violent offenses (12, 13). Unlike acute alcohol intoxication, however, chronic drinking behavior and drinking patterns in the 12 months before the offense did not differ between violent and non-violent criminals. Another study revealed that alcohol-dependent men had drunk significantly more alcohol in the 12 hours before violent conflicts with their partners than before situations that did not end in violence (14). Acute episodes of high alcohol consumption therefore seem to favor aggressive behavior more strongly than chronic alcohol consumption (15, 16). Thus it seems that more frequent severe, acute intoxication makes a decisive contribution to the high prevalence of alcohol-related aggression in alcohol-dependent individuals.

In summary, these figures illustrate the complex conditions that lead to the onset of alcohol-related aggression and highlight the importance of treatment. Treatment should take account of the effect of problematic drinking on the cognitive, biological, and social mechanisms that favor aggressive behavior.

A current review indicates that the cognitive processes often affected in acute alcohol intoxication and chronic alcohol consumption that may contribute to alcohol-induced aggression can be improved by computer-aided cognitive training (e31). For example, difficulties processing information, verbal or non-verbal memory, attention, and problem-solving abilities are enhanced. In alcohol-dependent individuals it has successfully been shown that cognitive training can support rehabilitation as part of traditional treatment (e.g. 17–19). It should be noted that the target variables of these randomized, controlled clinical trials were treatment outcomes such as remaining abstinent, rather than aggressive behavior or aggression. Training of cognitive functions seems also to improve patients’ ability to take in and process information from empirically validated therapies more quickly and with more lasting effect. This makes it possible to recall and use the newly learned interaction and coping methods better. Examples of putting such alternative coping methods into practice as part of treatment for alcohol-induced aggression are the testing of alternative actions (e.g. learned in social skills training) in provocative situations, such as suppressing the impulse to react aggressively.

A further important issue that should be taken into account in the treatment of alcohol-induced aggression is the fact that people who abuse alcohol are inclined to take less account of future gratification (e.g. avoiding damage to health or social considerations) than of immediate gratification (e.g. alcohol consumption, immediate release of aggression) (e32, e33). Cognitive training that focuses on improving the ability to delay gratification could help in this regard (20) and thus positively affect abstinence outcomes (21).

There is also evidence that some tendencies towards aggressive behavior can be treated pharmacologically: Knutson et al. (22) showed that a pharmacological increase in serotonin levels resulting from antidepressant medication was associated with reduced feelings of insecurity and anxiety (22). The research subjects exhibited less aggressive behavior and increased readiness to compromise as their anxiety decreased in severity in competitive role plays. Interestingly, the medication reduced insecurity and anxiety more markedly than it reduced aggression itself, which suggests that reduced aggression was the result of a decrease in these negative feelings (i.e. insecurity and feelings of being threatened) (22). According to this idea, increased serotonergic neurotransmission reduces negative emotions, and this in turn makes it easier to inhibit aggressive behavior; the latter is very likely to be the result of a reduced perception of environmental stimuli as a threat (23).

To date there are no studies that directly investigate whether alcohol-induced aggressive behavior can be reduced through training in cognitive functions. An understanding of individual risk factors may contribute to providing treatments tailored to individual problems.

Knowledge of the origin and treatment of alcohol-related aggression remains insufficient, despite the frequency of such aggression. Further studies are needed in order to clarify why some people become aggressive when under the influence of alcohol and others do not. For example, there is evidence that high levels of impulsiveness (24, 25) and low stress tolerance (26, 27) can reinforce the inclination to behave aggressively when under the influence of alcohol. Individuals who find it difficult to inhibit their behavior and delay gratification and who have problems enduring unpleasant feelings seem to become aggressive more frequently after consuming alcohol. In such cases the treatment approaches described above can help to strengthen cognitive and emotional control and thereby counteract alcohol-induced aggression. However, in order to develop specific treatment programs suitable controlled trials of treatments are needed, comparing specific forms of intervention to standard treatment.

Acknowledgement
This work was funded by the German Research Foundation (DFG, Deutsche Forschungsgemeinschaft) (DFG FOR 1617: HE 2597/14–1) and the German Federal Ministry of Education and Research (NGFN Plus 01GS08159).

Box
What can neurobiology contribute?
Enlarge All figures 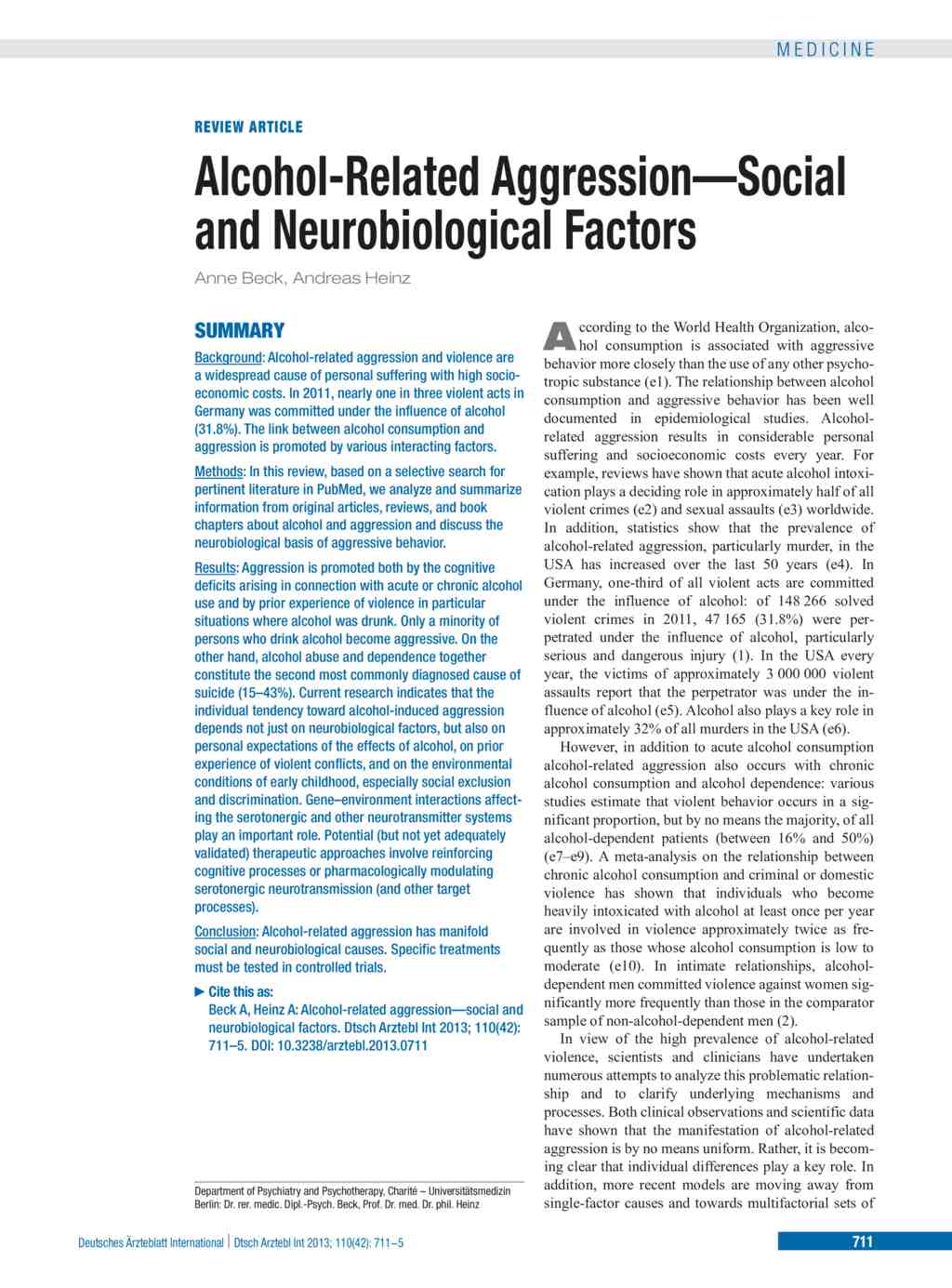