Evidence Based Prevention on the WHO Model Can Help

It is easily forgotten just how many individual and societal consequences alcohol consumption has. The general public is most aware of alcohol’s harmful effect on the liver. Other consequences of high alcohol consumption, such as gastrointestinal hemorrhage, pancreatitis, anemia, cardiac arrhythmia, cardiomyopathy, polyneuropathy, depression and anxiety disorder, accidents, and finally malignant diseases, are less well-known; however, their frequency makes them very significant to the German healthcare system. This edition of Deutsches Ärzteblatt International examines two other consequences of alcohol consumption that are often overlooked: fetal alcohol syndrome (FAS) (1) and alcohol-related aggression (2).

This clinical practice guideline (1) aims to allow FAS to be diagnosed early using evidence-based criteria so that affected children can be provided with optimum care as early as possible. Confirmation of intrauterine alcohol exposure is not a requirement for FAS diagnosis. Initial indications of FAS during childhood are characteristic facial features and growth delays, and in adolescence behavioral disorders or neuropsychological deficits. A practical Pocket Guide FAS has been developed by the guideline group for detailed diagnosis.

An important aspect, and one that is also acknowledged in the article by Landgraf et al. (1), is FAS prevention. It is currently impossible to describe any quantity of alcohol as not dangerous to an unborn child. If asked whether a glass of champagne can be raised to a pregnancy, physicians must therefore answer with a resounding No. Other countries, such as France, have begun to label alcoholic drinks with warnings for pregnant women, although a law on this was narrowly defeated in the EU Parliament in 2010. In Germany too, such initiatives have so far come to nothing.

Alcohol-related aggression is a subject of great import to society. Approximately one-third of violent acts in Germany, almost 50 000 per year, occur under the influence of alcohol and are therefore potentially preventable. Approximately 40% of these acts are committed within the family or among acquaintances (German Federal Ministry of the Interior, 2012 [3]).

Beck and Heinz (2) describe cognitive alterations associated with alcohol as a particular cause of aggressive behavior under the influence of alcohol. These alterations include the following:

Turning to biological risk factors, certain genetic variants of the serotonergic system have been identified which become particularly effective in combination with social neglect in early childhood. Victims of social neglect may therefore have a higher risk of becoming perpetrators themselves as adults.

However, if alcohol-dependent individuals abstain from alcohol in the long term, the increased numbers of violent acts they commit fall to the level found in the general population. This means that these are not persistent character or personality traits but the direct effects of alcohol consumption resulting in a higher prevalence of violence among those who are alcohol-dependent.

However, treatment programs to reduce alcohol-related aggression are still at early stages of development and, as with pharmacological therapy, no controlled trials with appropriate treatment aims have been conducted. It is important to promote the development and evaluation of these treatment approaches, but this will take time; and it will not solve the problem completely due to the limited efficacy of psychotherapy and antidepressants. In contrast, approaches that reduce alcohol consumption in the population as a whole are much more effective.

It has long been maintained that effective prevention strategies aimed at reducing alcohol consumption in the population as a whole cannot be implemented for political reasons, that too many economic interests oppose such strategies, and that the public would punish any political interventions at the next election. The success of the EU-wide strategy to reduce tobacco consumption seems to prove the opposite. The EU-wide introduction of nonsmoker protection measures, the smoking ban in restaurants and public buildings, restrictions on cigarette machines, and price increases have already, after just a few years, achieved a high level of acceptance among the public. Memories of cigarette smoke in cinemas, on airplanes, on the railroads, and in offices are perceived as images from a “blurry” past. Public attitudes to alcohol have also undergone a major shift already: at parties and celebrations it has been quite normal for many years now to drink alcohol-free drinks without feeling the need to justify oneself.

The publication of the World Health Organization’s Global strategy to reduce the harmful use of alcohol (4, 5), an evidence-based initiative containing well-developed advice for addiction policy, has therefore come at precisely the right time. These recommendations for politicians contain ten target areas that may effectively reduce the negative consequences of alcohol without needing to give a finger-wagging lecture on abstinence. These target areas include the following:

This is a responsible approach to alcohol that allows for enjoyment but reduces its negative consequences. What better reason could there be to tackle this problem than the consequences of fetal alcohol syndrome and alcohol-related violence (see over) alone? 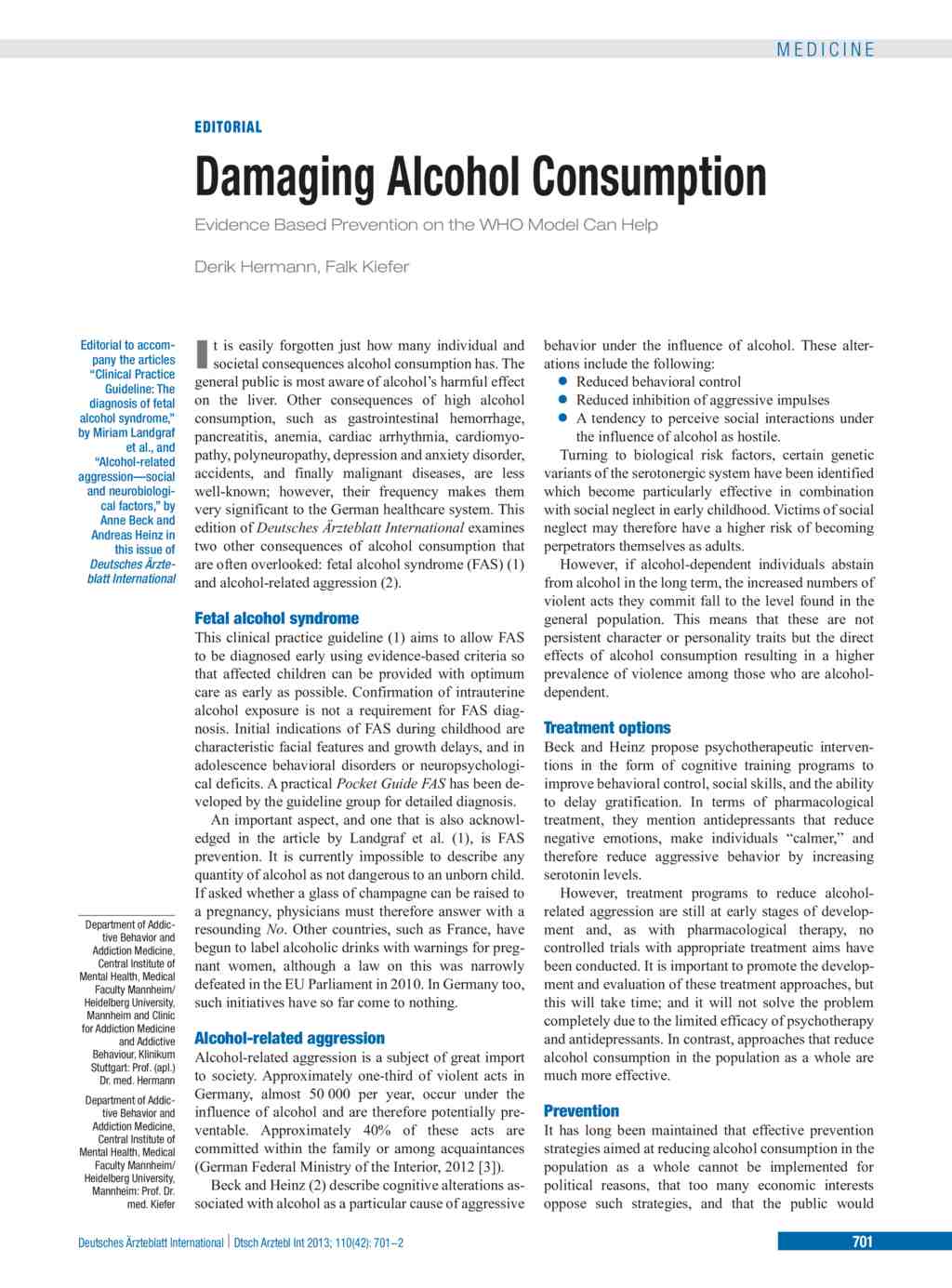