Background: Lung cancer is the leading cause of death from cancer in Germany. 90% of cases are due to the inhalation of tobacco smoke. About 40% of patients with newly diagnosed lung cancer are still smokers. A structured smoking cessation program is medically reasonable in this situation but is only rarely offered.

Methods: This review is based on a selective search in the PubMed database combined with a manual search for current publications.

Results: Many cross-sectional and longitudinal studies have shown that patients with lung cancer benefit from smoking cessation. After resection with curative intent, second tumors are 2.3 times more common, and recurrent tumors 1.9 times more common, in patients who continue to smoke than in those who stop. The overall mortality in smokers is 2.9 times higher. Smoking cessation also lowers the rate of radiation pneumonitis and infection during radiotherapy and prolongs the median survival after chemoradiotherapy for small-cell lung cancer (18.0 vs. 13.6 months). For patients with non-small-cell lung cancer, smoking cessation is associated with a better general state of health (77.5% vs. 57.6%). For the many patients with lung cancer who are treated palliatively, smoking cessation offers the advantages of improved pulmonary function, weight gain, and better overall quality of life.

Conclusion: Smoking cessation in patients with lung cancer is an important means of increasing the efficacy of treatment and improving their quality of life.

Tobacco smoke is an aerosol containing more than 4000 substances, more than 50 of which are known to be carcinogenic. These include polonium 210, benzene, formaldehyde, lead, and cadmium (1). If human bronchial epithelial cell cultures are exposed to tobacco smoke, the cultures show evidence of an increased growth rate, weakened adhesion, and increased frequency of malignant transformations after only a few days. These effects are suspected to be mediated by alteration of intracellular signal transduction, not by long-term mutagenic or carcinogenic effects of the known carcinogens (2).

In Germany, lung cancer is the leading fatal cancer in men, and the second-most common in women (4). In 2011 almost 44 000 people died as a result of lung cancer in Germany. This is significantly higher than for colon and breast cancers combined (approximately 17 000) (Federal Statistical Office [Statistisches Bundesamt], www.destatis.de). Approximately 90% of lung cancers are caused by tobacco smoke inhalation (5). The cumulative lifetime risk of dying of lung cancer before the age of 75 years for a continual smoker is 16%. There is no threshold below which exposure is risk-free. All histological lung cancer types can be caused by tobacco smoke (6). The fact that even lung cancers eligible for curative treatment have a better prognosis the earlier tobacco use is ended before disease manifestation highlights the importance of smoking cessation for every person who smokes, even if he or she has no manifest disease (7).

This review article aims to provide the reader with up-to-date information on smoking cessation in lung cancer patients that is relevant to clinical practice. To this end, a selective search of the literature was performed in PubMed, in October 2012, with the following keywords: “cessation” (any field), “lung cancer” (title), and “smoking” (any field). This identified 463 abstracts, which were then analyzed. The bibliographies of recent papers were also evaluated.

The positive effects of quitting smoking

However, another meta-analysis for patients with stage I–IIIA non-small-cell lung cancer (NSCLC) did show a clear advantage for abstaining from smoking in terms of survival, recurrence, and secondary cancer after adjusting for other risk factors, particularly cardiovascular risk factors (3). Smokers developed secondary cancer following curative surgery 2.3 times more frequently, and recurrence 1.9 times more frequently. Overall mortality in smokers was 2.94 times higher (3). Data from 7990 patients who had undergone primary resection for lung cancer and were included in the dataset of the American Society of Thoracic Surgeons between 1999 and 2007 also showed a reduction in mortality and the pulmonary complication rate in patients who had not smoked for more than 12 months before surgery (10). The multivariate-adjusted perioperative mortality risk after surgery for lung cancer, when compared to those who had never smoked, was 3.5 for active smokers and only 2.5 for patients who had stopped smoking at least 12 months before surgery. The risk of perioperative pulmonary complications was increased 1.8-fold for active smokers, 1.6-fold for patients who had stopped smoking within the last year, and 1.3-fold for patients who had already been nonsmokers for at least 12 months (all figures multivariate-adjusted and compared to those who had never smoked) (10). A further study involving 569 patients who had undergone resection for stage I NSCLC and were followed up for a median of 5.9 years subsequently showed absolutely no cases of secondary pulmonary cancer in 45 patients who had never smoked, 2.72 per 100 patient years in active smokers, and 1.77 per 100 patient years in ex-smokers. The hazard ratio for secondary lung cancer in active smokers versus ex-smokers was 1.9 (11).

Smoking cessation also improves quality of life following pulmonary resection. One prospective study recorded the quality of life of 70 patients who had undergone lobectomy or pneumonectomy. Smoking cessation at any time before surgery was advantageous, whereas continued smoking up to the time of surgery was associated with a worse postoperative quality of life (12). For example, active smokers continued to complain of shortness of breath as much as six months after lung cancer surgery, while patients who had stopped smoking upon diagnosis of lung cancer continued to report the same values as before surgery. Active smokers also complained of chest pain significantly more frequently (12).

An older article showed that in patients who had been successfully treated for small-cell lung cancer (SCLC) continued smoking was a risk factor for further malignant lung disease (15, 16). The risk of developing secondary lung cancer five to nine years after initial diagnosis of SCLC was 7.5 for active smokers (95% CI: 1.8 to 19.7) versus 3.8 (95% CI: 0.9 to 9.8) for patients who had stopped smoking (15, 16).

A recent meta-analysis which included five studies with a total of 1069 SCLC patients shows that the adjusted risk of secondary lung cancer in active smokers versus ex-smokers is increased by a factor of 4.31 (3).

The explanation for the findings described above may be the effect of smoking tobacco on the pharmacokinetics of chemotherapy agents. Irinotecan, which among other applications is used in patients with lung cancer, has been well researched. The area under the curve (AUC) of irinotecan is significantly lower in smokers; this is explained by the CYP3A modulation associated with tobacco (17). The AUC of irinotecan in the first 100 hours following application was 21.9 mg × h/mL in nonsmokers, versus 18.9 mg × h/mL in smokers (p = 0.003). The lower plasma levels suggest an increased risk of chemotherapy failure (17). Future studies should systematically investigate the effect of tobacco smoking on the pharmacokinetics of chemotherapy agents (18).

The effect of tobacco smoke on drug metabolism must be taken into account in lung cancer patients who smoke. The oral EGFR (epidermal growth factor receptor) inhibitor erlotinib is metabolized more actively in smokers as a result of cytochrome P450 (CYP1A1/1A2) induction and was therefore less effective (19). In a Phase I/II study in smokers receiving first-line chemotherapy for advanced NSCLC, the maximum tolerated dose of erlotinib was 300 mg. Plasma levels of erlotinib at this dose were approximately the same as those measured at a dose of 150 mg/day in an earlier study in nonsmokers (20). For the clinically relevant association between the development of treatable mutations and tobacco smoking, see further literature (21, 22).

In a study involving 83 lung cancer patients who had received radiotherapy with curative intent, 17/75 (23%) of active smokers developed radiation pneumonitis, versus 0/8 of nonsmokers (23). Smoking was also a risk factor for lung infections during radiotherapy (24). In patients who had received radiation for stage I or II NSCLC, the two-year survival rate was only 41% in smokers but 56% in ex-smokers and those who had never smoked (25).

The positive effects of smoking cessation on radiochemotherapy were shown by a Canadian study of 215 patients with limited-stage SCLC. Patients who refrained from smoking during therapy had a median survival time of 18.0 months, whereas the corresponding figure for those who continued to smoke was only 13.6 months. In addition, the statistically significant increase in five-year survival rate, which more than doubled from 4% to 8.9% (p = 0.017), shows that smoking cessation substantially improves long-term prognosis (26) (Figure 1).

Some professionals are afraid that emphasizing smoking cessation with lung cancer patients reduces their quality of life. Fortunately, this is not the case. In both smokers with chronic obstructive pulmonary disease (COPD) and “healthy” smokers, quality of life improves after smoking cessation (1). In large cohorts with more than 1500 patients, non-smoking lung cancer patients (both those who had never smoked and ex-smokers) reported a higher tumor-specific quality of life than those who smoked (27) (Figure 2). Interestingly, all scores for the various types of quality improve gradually with the length of time since smoking cessation; they were therefore most favorable for those who had never smoked and worst for active smokers. Even the values of patients who did not stop smoking until they were diagnosed with lung cancer were still better than those of active smokers (27) (Figure 2).

Figure 2
Quality of life by smoker status
Enlarge All figures

Approximately 40% of patients with newly diagnosed lung cancer smoke (30, 31). Patients are particularly willing to stop smoking immediately after initial diagnosis. This effect, known as the “teachable moment,” has been observed in studies into lung cancer screening (32, 33) and for many other diseases, particularly cardiovascular diseases. However, cancer patients who continue to smoke often present symptoms of major tobacco dependence (34). Nevertheless, cancer patients can stop smoking. For example, the rates of smoking cessation of two cohorts containing 201 participants each—lung cancer patients in one and patients with other types of tumors in the other—were compared when given targeted smoking cessation treatment. The abstinence rate after six months was 22% in the lung cancer group and 14% in the group containing patients with other cancers (35).

When diagnosed, the majority of lung cancer patients would like to stop smoking (35). These findings were confirmed in a review that included 11 studies and was published in 2003 (34). In two other studies, approximately 50% of patients were still nonsmokers six months after stopping (36, 37). Importantly, nicotine replacement therapy is not associated with any increase in the incidence of cancer, even in long-term follow-up (38).

In collaboration with other medical societies, the German Respiratory Society (DGP, Deutsche Gesellschaft fur Pneumologie und Beatmungsmedizin) has published an S3 Guideline on the diagnosis and treatment of lung cancer (4). This guideline establishes the following: “Each consultation must include inquiry into and documentation of lung cancer patients’ smoking habits. Lung cancer patients who continue to smoke should be encouraged to stop. They must have easy access to smoking cessation programs that include pharmacological and psychological intervention options.” The current guideline of the European Society for Medical Oncology (ESMO) also includes a similar recommendation (40). These recommendations are structurally incorporated into lung cancer centers’ certification by the German Cancer Society (Deutsche Krebsgesellschaft). Certified lung tumor centers therefore do provide structured smoking cessation treatment.

Dr. Rittmeyer has received consultancy and lecture fees and reimbursement of travel expenses from Boehringer Ingelheim, Lilly, and Roche. Conference fees have been paid on his behalf by Lilly and Roche. He has received funding for clinical study conduct from Astellas, GSK, Lilly, Pfizer, and Roche.

Dr. Hinterthaner declares that no conflict of interest exists. 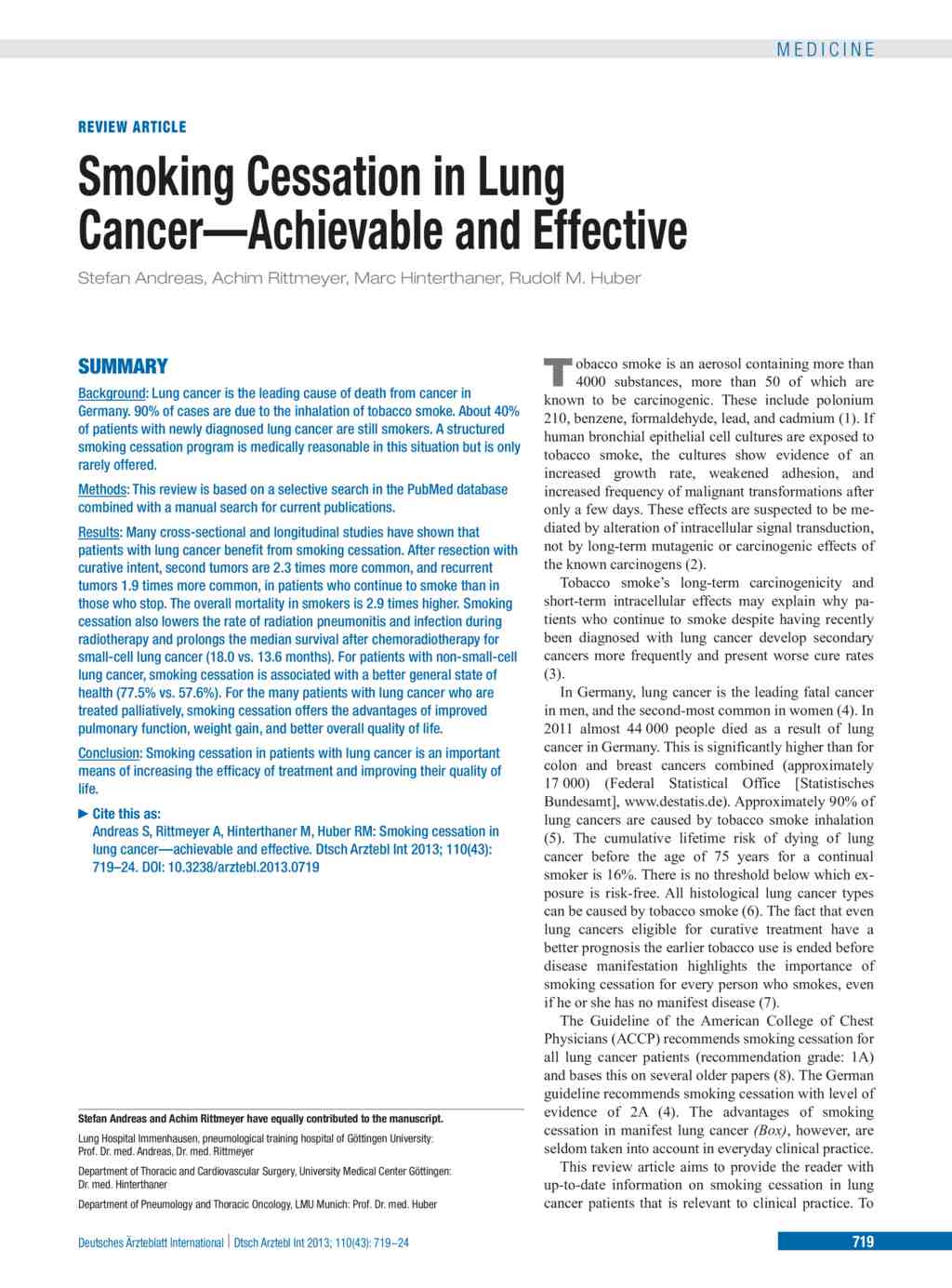