Here our reply to our esteemed colleague Prof. Priebe: The serious concerns expressed by the regulatory authorities were not only triggered by 2 large studies, but also by the meta-analysis of Zarychanski et al. (1), revealing a significantly increased mortality and a significantly increased need for renal replacement therapy in HES-treated patients compared with patients treated with crystalloid solutions, based on 31 studies with altogether 10 290 patients. A recent Cochrane review about renal failure, which we could not take into account in our paper, includes 42 studies with 11 399 patients. The authors arrived at the conclusion that “it is likely that these risks outweigh any benefits [of HES]“ and that thus “alternate volume replacement therapies should be used in place of HES products“ (2).

In patients with severe sepsis, volume deficits are not limited to the initial phase, but often persist for two to three days because of fluid losses into the tissue (“capillary leak”). It is not unusual to find a positive fluid balance of 10–20 and more liters in these patients during the acute phase of sepsis, regardless of the type of fluid used. Apart from the statistically significant negative effects of HES in the CHEST study, it should also be considered that adverse events observed in the HES group occurred with a cumulative dose of 5 mL/kg, i.e. at a dosage far less than half of the presently approved daily dose. The use of hyperchloremic solutions in both arms of a blinded, randomized study cannot explain the adverse events in one of these groups.

For Mr. Schorr, we would like to highlight two important studies conducted in out-of-hospital environment: In an out-of-hospital setting, 1282 patients with traumatic brain injury not accompanied by hypovolemic shock (3) and 853 severely injured trauma patients with hypovolemic shock (4) received either 0.9 %, 7.5% saline or 7.5% saline/6% dextran-70. Having met the futility criteria, the first study was terminated early, because the 6-month neurologic outcome and 28-day mortality (75.1%, 75.7 % and 74.3 %, respectively) were almost identical (3). Likewise, the second study was discontinued because of comparable 28-day mortality; in addition, safety concerns were raised, since among patients who received hypertonic fluids and no blood transfusions a fatal outcome was observed about twice as often as in patients who received isotonic saline (4). Therefore, the current German polytrauma guidelines recommend crystalloids as first-line treatment. Having a similar risk profile as HES, gelatin solutions should no longer be used either. They prolong the bleeding time and are therefore no longer approved for sale in the USA. 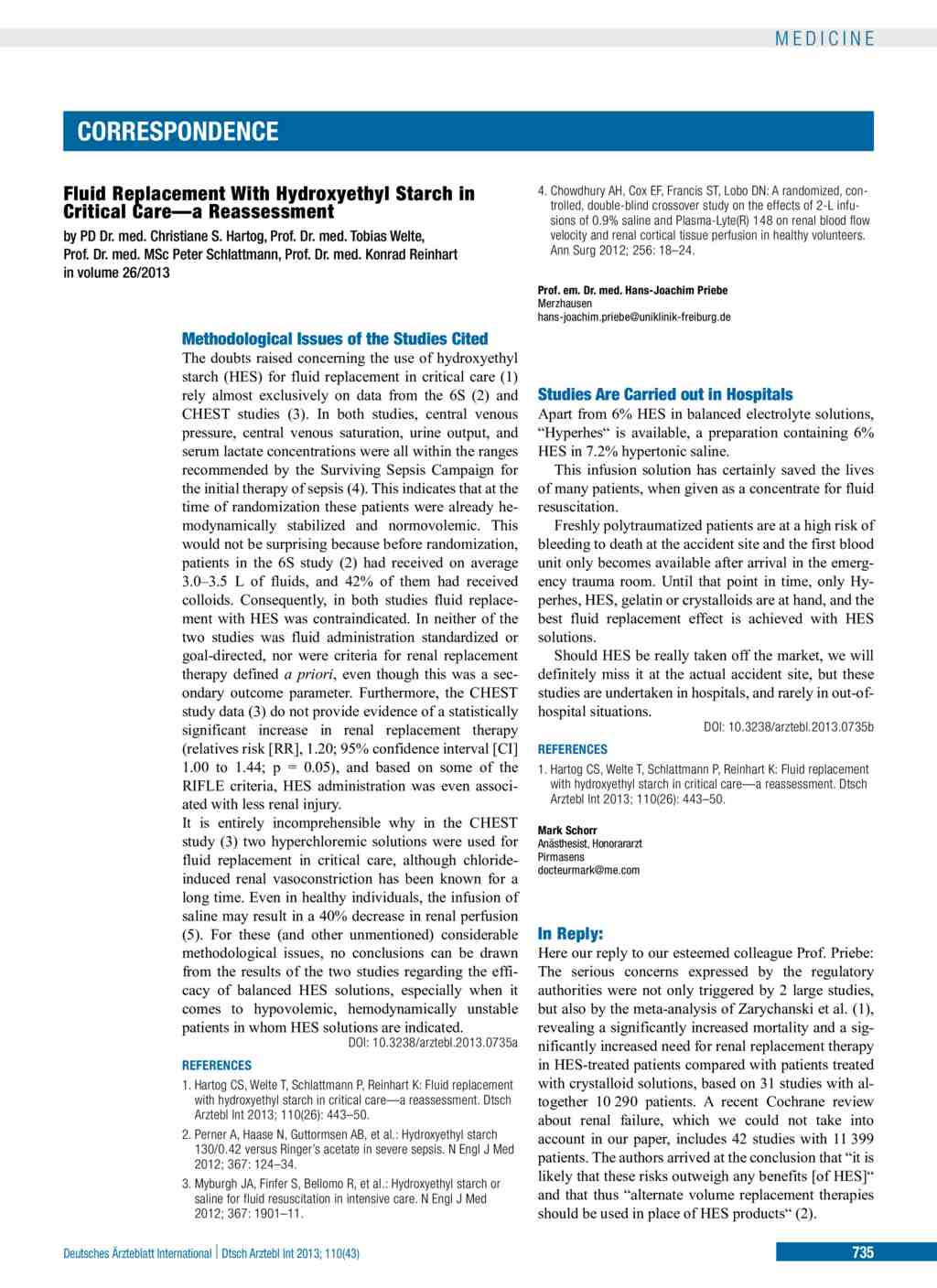