Background: The German Standing Committee on Vaccination Recommendations (Ständige Impfkommission, STIKO) recommends standard vaccination against pneumococcal infections for all persons aged 60 or older, and for all persons of any age with an increased health risk. It is not known how many persons in the target group in Germany have actually been vaccinated.

Methods: We used claims data of a German statutory health insurance (Deutsche BKK) to determine pneumococcal vaccination rates, stratified by age and risk, for the one-year period 1 July 2008 to 30 June 2009. The number of influenza vaccinations in the same period was analyzed for comparison. Because pneumococcal vaccination does not need to be performed annually, the calculated rates are an underestimate of the percentage of persons who have been vaccinated. A simulation model was used to correct for persons vaccinated at earlier times. The vaccination rates were estimated on the basis of various scenarios.

Community acquired pneumonia (CAP) is the most common form of pneumococcal disease in adults. About 40% of infections are caused by Streptococcus pneumoniae (1). In Germany, the incidence of CAP is some 3 cases per 1000 population for all age groups, and 8/1000 for the group aged 60 or older (2). Bacteremic CAP and sepsis are complications of CAP and range among the group of invasive pneumococcal diseases (IPD) (3). Data from PneumoWeb have shown an annual number of more than 900 cases for IPD in older persons (≥ 60 years), compared with fewer than 100 cases per year in younger age groups (4). Depending on age and number of comorbidities (risk), inpatient mortality due to CAP is between 2% (low risk) and 35% (high risk) (2) in Germany; the proportions reported for IPD are 5–35% (5).

To prevent pneumococcal diseases, the German Standing Committee on Vaccination Recommendations (Ständige Impfkommission, STIKO) (6) recommends standard vaccination for all persons older than 60. Vaccination based on a particular indication, and independent of age, is recommended for persons with an increased health risk. This includes persons with chronic diseases (for example, diabetes, renal failure) and persons with congenital or acquired immunodeficiencies (for example, sickle-cell anemia, HIV infection). Since mortality and morbidity due to pneumococcal diseases are still high, owing to antibiotic resistance in some pneumococcal strains (7, 8), it makes sense to vaccinate especially people in the above groups against pneumococcal infection.

For the groups of persons receiving the vaccine on the basis of an indication there are no confirmed data on incidence and prevalence. The dominant underlying diseases determined by the Community Acquired Pneumonia Network of Excellence (CAPNetz) (9) are:

In order to determine the size of the at-risk population and the vaccination rates, we conducted a routine data analysis as a retrospective cohort study without direct patient contact.

A dataset from the Deutsche BKK health insurance for the accounting period (= study period) from 1 July 2008 to 30 June 2009 was available for our study. For this time frame, accounting data were available for the documentation codes (= vaccination codes, billing codes) (Table 1) valid and definite nationwide for vaccination services, since 1 July 2008 (15). These formed the basis for identifying vaccination services (eBox [16–19]).

Vaccination rates for the pneumococcal vaccine

We estimated the determined vaccination rates for a period of 12 months by entering the data into a simulation model (17) (Table 4).

The scenario with a rate of 30% for the booster vaccination yielded the best results, independently of how long a person is considered to be vaccinated. According to this scenario, the estimated proportion of vaccinated persons for the total cohort was 3.75% (age group: 18–59) and 50.89% (age group: 60 and older). For the cohort with at least one predefined risk the proportions were 12.66% and 54.67%, respectively.

Vaccination rates for the influenza vaccine

The aim of this study was to determine the pneumococcal vaccination rate in adults in Germany within the time period from 1 July 2008 to 30 June 2009. The data on which we based our calculations were claims data from a statutory health insurer with a nationwide membership (Deutsche BKK).

Since the pneumococcal vaccination is not given annually, the exact proportion of persons had to be estimated by using an existing simulation model for this time period. The results (Table 4) obtained from the simulation model show that risk status and the number of booster vaccinations affect the effect size. The aspect of whether a person is still considered vaccinated in the study period also constitutes a crucial factor. The results show that the vaccination was given depending on the predefined risk.

Contrary to our expectations, the rates in the at-risk population for the 18–59 age group were considerably below those in the 60+ age group. Similarly, persons at moderate risk apparently received more vaccinations than persons at high risk. The higher proportion of vaccinated persons aged 60 or older determined for the at-risk population might be explained with the fact that

However, it should be noted that non-vaccinated persons who develop a risk during the course of their lives increase the proportion of non-vaccinated people in the at-risk group. If the results are compared with those of influenza vaccination, the estimated rates for the pneumococcal vaccine as seen in their totality (results of all scenarios) can be considered similar.

The vaccinations in the “no risk” group ages 18–59 can probably be explained with a risk definition that was too narrow or irregularities in applying the documentation codes. This may have led to misestimates in the other cohorts too.

From the results of this study it can be deduced that even in the presence of all factors no satisfactory vaccination coverage was achieved for adults in the study period. The influenza vaccination rates we found in our study are not satisfactory either, compared with the WHO target of 75% vaccination coverage in older persons. The rates for pneumococcal vaccination cannot be compared with the study reported by Pletz et al. (2012) (9), because our study encompasses a larger cohort of persons (not restricted to CAP patients) and a different study period. A comparison for the influenza vaccination from the GEDA study (57% for the 2007/2008 season) (20) is possible to a limited extent only. The GEDA study was a telephone health survey, in which 21 262 randomly selected, exclusively German-speaking persons older than 18 were questioned. The sample for this cross sectional survey was based on a representative random sample from a telephone landline sampling system of the Arbeitskreis Deutscher Markt- und Sozialforschungsinstitute (ADM, a business association that represents the interests of private-sector market and social research agencies in Germany) (21).

The low vaccination rates for the pneumococcal vaccine may be the result of a lack of awareness of the risks posed by infectious diseases. However, skepticism regarding the effectiveness and/or safety of the pneumococcal polysaccharide vaccine may also play a part (9, 27, 28). According to a oft-cited meta-analysis, no protection is conferred in cases of non-bacteremic pneumonia and only relative protection in IPD (odds ratio [OR] 0.26) (28). This OR (0.28) was also reported for bacteremic pneumococcal pneumonia in Germany (9). Only one clinical study (27) showed better efficacy. Estimates of the effectiveness in specific pneumococcal diseases may be gleaned from the model of Kuhlmann et al. (2012 [17]), on which this study is based. Polysaccharide vaccines are regarded as not at all or barely suited to developing an immunological memory by administering booster vaccinations (hyporesponsivity syndrome) (29); for this reason, since 2009 the STIKO has been recommending a booster only in selected indications (30).

Further reasons for low vaccination rates may include insufficient take-up of doctor–patient contacts to check up on and boost vaccination protection (6, 34). For this reason it seems sensible to use every contact with patients, to address patients directly with regard to vaccination conferred protection and achieve an increase in vaccination rates. Further possible measures include the introduction of a bonus system for doctors and patients or the certification for vaccination training events, as well as reminders by telephone for insurees from their health insurance company (35, 36).

Routine data can be accessed more rapidly and cost-effectively than primary data. However, there are some limitations that we will explain.

The diagnoses for determining the at-risk population could not be clearly determined from the STIKO’s definition of risk. This may have resulted in a misestimation of the results in the at-risk groups. Relative to the entire cohort of insurance members, however, it can be assumed that vaccination rates vary only very slightly. This is because the overall number of doses administered does not change and the different vaccination schemes in the at-risk groups (rate of booster vaccinations) will lead to notable differences in the results only in case of the unrealistic assumption that the protection conferred does not fall over time. Furthermore, the calculated proportion of the at-risk population corresponds roughly with the data from the European Centre for Disease Prevention and Control. According to those data, the proportion of the population in Germany with at least one risk amounts to 28.1%, of which 19.8% is in the age group of those aged 65 or older and 8.3% in the age group <65 years (37).

Compared with the total of German statutory health insurers, the age distribution in our data set is average and no variations are known (personal communication, Braem A: distribution of insurance members compared with other statutory health insurers; 15 February 2012). Relative to the proportions in the available age groups, the age distribution in our cohort of insurees was comparable to that of the total population of Germany (eFigure). Therefore it appears probable that the results presented correspond to general vaccination practice in Germany. We did not intend to conduct any testing or extrapolations in this respect. For this reason, extreme caution is indicated when drawing conclusions about whether needs are met or not.

Since 1 July 2008 documentation numbers are valid (15) that are consistent nationwide, subsequent to the §20d SGB V (the part of the social code that relates to health insurance) (38), which came into force on 1 April 2007. In the dataset under investigation, we still observed the use of different documentation code for the billing of vaccinations in Germany. This may on the one hand be the result of a latency period for the use of the new documentation codes, and on the other hand, an indication of incorrect use (in the sense of coding errors) (39, e1–e3).

A particularly limiting factor, however, is the short study period of a total of four quarters. The vaccination rates observed during this period provide only a small out-take of the pneumococcal vaccination status in adults.

Because of the limitations, our results on vaccination rates should be validated in further studies. Investigations regarding the effectiveness of the vaccination in routine medical care should also be conducted. Furthermore, qualitative studies of vaccination behavior may provide an insight into why vaccination rates are so low.

eTable
Risk definition based on ICD-10 categories
Enlarge All figures

Conflict of interest statement
Ulrike Theidel MSc has received honoraria for consulting from Pfizer in the context of her work for Herescon. Furthermore she has received study support (third party funding), honoraria for speaking and authorship, and reimbursement for conference participation fees from Pfizer.

Alexander Kuhlmann MSc has received honoraria for authorship and has been reimbursed for conference participation fees and travel expenses from Pfizer. Furthermore he has received study support (third party funding) from Pfizer.

Dr Braem declares that no conflict of interest exists. 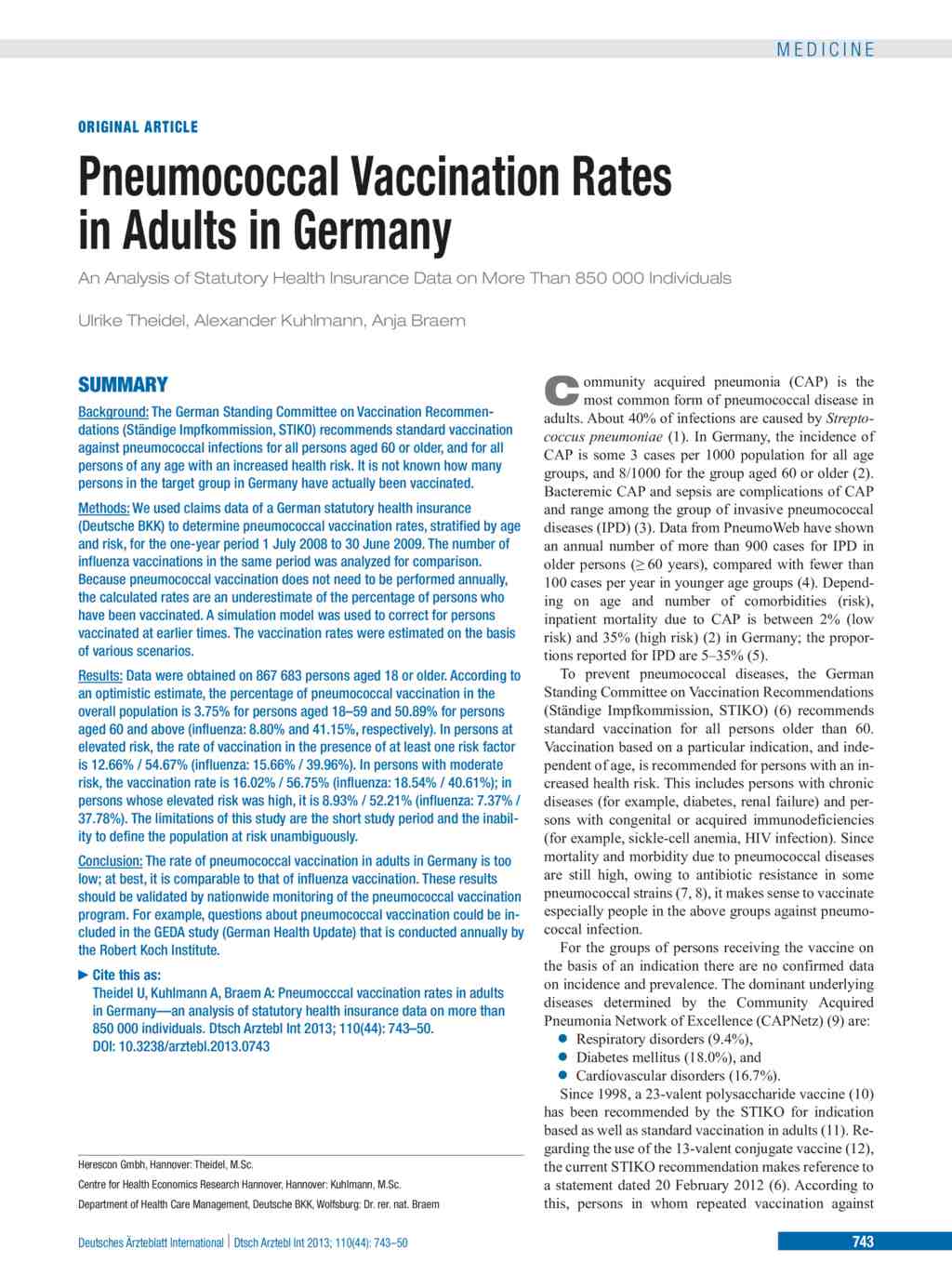