Influenza Vaccination and the End of Simplicity

Influenza is a major, persistent health problem all over the world (1). One might say, to paraphrase Churchill, that influenza vaccination is not the best solution to this problem, but it is nonetheless better than all the others. We have no choice but to live with the current situation and to recommend and perform influenza vaccination. For, indeed, the available vaccines do confer a benefit. This is so even if their protective effect, which is indisputably present, is only relative rather than absolute. Moreover, the protective effect varies from year to year, from one age group to another, and from one influenza virus to another among the viruses represented in the vaccines.

It bears mention here that a reassessment of the data in an often cited, critical Cochrane Review on the efficacy of influenza vaccination in the elderly revealed a markedly positive protective effect (2, 3).

Any discussion of the efficacy of influenza vaccination must maintain a clear distinction between two entirely different aspects of efficacy, namely, immunogenicity and protective effect. Data on humoral immunogenicity are relatively easy to obtain under controllable conditions: one immunizes a well-defined group of individuals and then, after a given period of time, measures the quantity of antiviral antibodies that they have produced. Much more important, however, is the actual protective effect of vaccination against demonstrated influenza virus infection and disease (or serious disease). Clearly, measurement of efficacy in this sense is much more difficult and can only be achieved by large-scale clinical trials that are carried out during the influenza season. These, in turn, can be influenced by a large number of variables, including

Yet data on the protective effect of vaccination are urgently needed for our assessment, above all when we must compare one vaccine against another (4–7). Influenza vaccines may contain three or, as in the current vaccines, four different types of influenza virus (viral antigens) and have widely varying protective effects against these viruses. For example, in an extreme case, the range of protective effect may extend from 60% to only 10% (4).

The efficacy of influenza vaccination depends primarily on a close correspondence between the viruses (viral antigens) contained in the vaccine and the viruses that are actually prevalent in the current season. The vaccines that have been in use up to the present have a lesser protective effect in the elderly and in young children than in other age groups, and their efficacy is of limited duration (4). The goal of vaccine research and development at present is, therefore, to create vaccines that:

New vaccines and vaccination recommendations of the STIKO

Wutzler et al. discuss the recent developments in influenza vaccines, their application, and consequences for clinical practice (8). They present each type of vaccine in detail, describing its particularities and spectrum of efficacy, and derive indications for the use of each in particular target groups of patients. This information is important to physicians, because their task from now on will not merely be to establish the indication for vaccination, but also to establish the indication for a particular type of influenza vaccine. A further consequence of the development of new influenza vaccines was a recommendation issued on 26 August 2013 by the STIKO (Ständige Impfkommission, the German Standing Committee on Vaccination Recommendations at the Robert Koch Institute) favoring the use of live attenuated influenza vaccine (LAIV) in children aged 2 to 6 for whom vaccination is indicated.

The STIKO has not yet issued a general recommendation for the vaccination of all children, as has been done in a number of other countries. Such recommendations are based on the assumption that children play an important role in the spread of influenza virus throughout the population.

Although this epidemiological assumption is certainly plausible, the STIKO has refrained till now from recommending vaccination for all children because of what it considers to be insufficient data, above all with respect to the actual epidemiological effect of generalized vaccination of children.

Because the STIKO has committed itself to a very strict scientific standard for the issuance of new evidence-based recommendations on vaccination (9), it must await further data before taking any new action. One must also bear in mind that a decision to set the indications for vaccination principally on the basis of epidemiological concerns would be addressing further goals beyond the individual protection of the vaccinated child.

The lesser protective effect in the elderly of conventional influenza vaccines without adjuvant can be improved, it is thought, by the use of vaccines with added adjuvant. This assumption, though reasonable, has not yet been confirmed with full reliability in the few (four) clinical trials in which it has been tested. More good data would be very helpful for a definitive judgment on this matter (10).

At one time, the world looked simple, at least as far as influenza viruses were concerned: there was only one kind of vaccine, produced by a number of different manufacturers. Those days are over. The new vaccines that are already available at this moment—and more are sure to come—confront us with the task of selection. Physicians must now shoulder the responsibility of using the most appropriate vaccine for each individual patient.

In doing so, we pursue the larger goal of achieving high vaccination rates in the population groups for which vaccination is indicated—not least among medical personnel, whose rates of vaccination have often been lamentably low.

Conflict of interest statement
Prof. Mertens is president of the Society of Virology (Gesellschaft für Virologie) and a member of the Standing Committee on Vaccination Recommendations (Ständige Impfkommission, STIKO) at the Robert Koch Institute and of its working group on influenza. 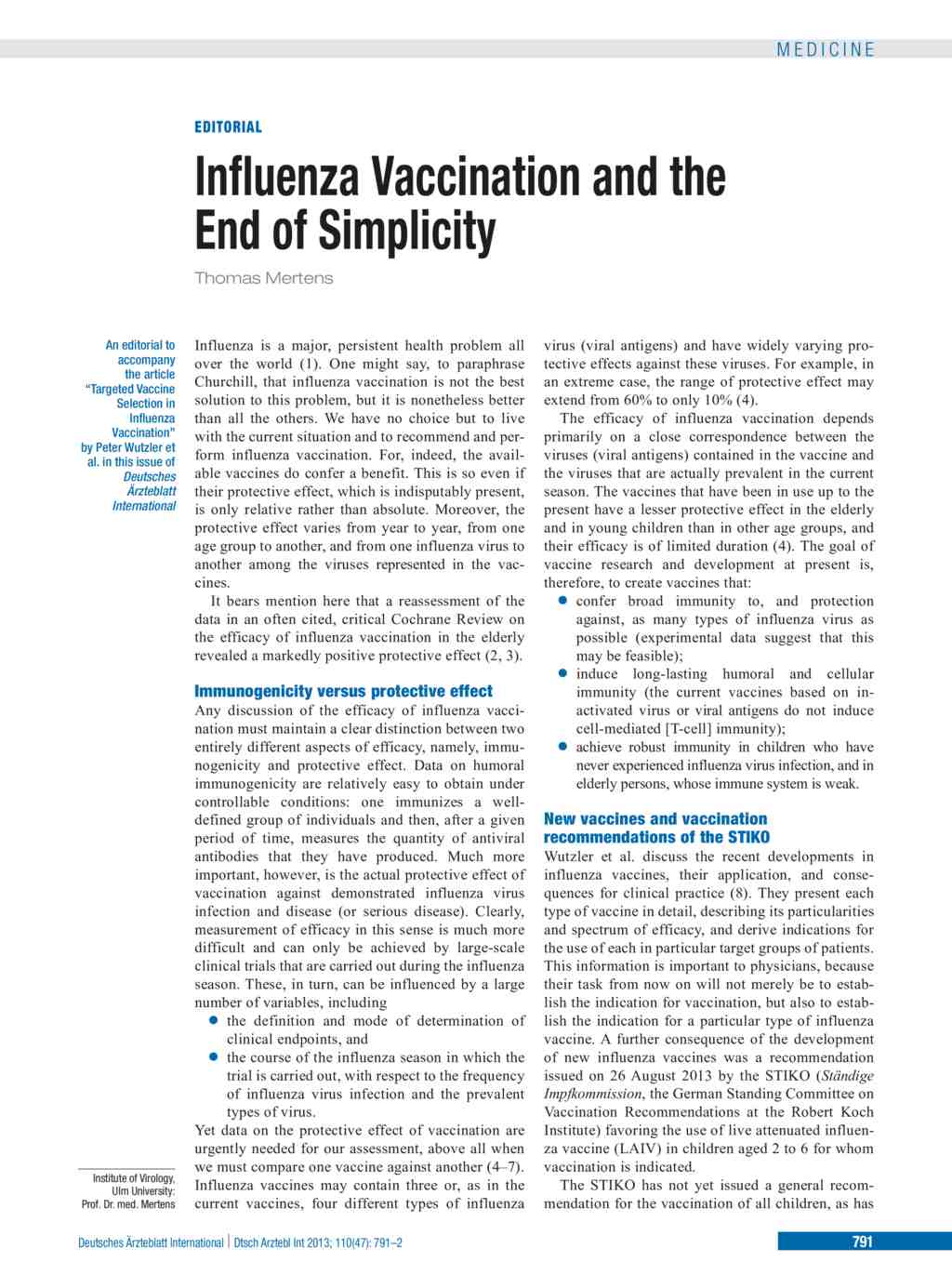