An Analysis of 268 Patients at the Charité Hospital

Background: There is no uniform, standardized procedure for the treatment of persons with electrical injuries in Germany. Even if they have no risk factors, such persons are often hospitalized and observed on an intensive care unit because of concern that cardiac arrhythmia might arise some time after the initial accident. We analyzed secondary data to determine the frequency of cardiac arrhythmia in survivors of electrical accidents.

Methods: Using the hospital information system (HIS), we retrospectively identified all patients admitted to the Charité Berlin, Campus Virchow Klinikum, for the ICD diagnostic code T75.4 (effects of electric current) in the years 2001 to 2008. The data pertaining to each case were extracted from the patients’ medical records.

Results: Over the study period, 268 children and adults were admitted to our hospital with electrical injuries. All underwent cardiac rhythm monitoring, usually for more than 12 hours. On admission, 33 children (28.7%) and 33 adults (24.2%) had mild cardiac arrhythmias of various types (sinus tachycardia, sinus bradycardia, isolated extrasystoles). No patient developed a cardiac arrhythmia requiring intervention at any point in his or her hospital course.

Conclusion: Even though too few patients were included to permit any definitive conclusions from this retrospective study alone, the present findings accord with the findings of multiple earlier studies implying that asymptomatic, otherwise unharmed patients without any ECG changes may not need to be admitted to the hospital for observation. There should be an evidence-based, standardized procedure for the treatment of patients with electrical injuries, so that these patients can be cared for safely and cost-effectively.

It is, according to our experience, common practice in many clinical centers in Germany to admit patients with electrical injuries to monitoring units—even if no associated signs and symptoms or diagnostic findings are present—to ensure that delayed arrhythmia can be excluded. The European Resuscitation Council Guidelines for Resuscitation 2010 recommend that “all those who survive electrical injury should be monitored in hospital if they (…) have had loss of consciousness; cardiac arrest; electrocardiographic abnormalities; soft-tissue damage and burns“ (2).

Only in a minority of hospitals these guidelines are followed closely. The fear of delayed cardiac arrhythmias is primarily fueled by case reports (3–6); however, from these no causal relationship between electrical injury and arrhythmia can be derived.

Several clinical studies showed for pediatric and adult patients that electrical injuries were not associated with the occurrence of delayed arrhythmia; however, the case numbers in most of these studies were comparatively small (7–10) (n = 145, 151, 212, and 31, respectively). Even studies with an exclusive focus on high-risk patients failed to show such association (11, 12) (n = 48 and n = 134).

In this study, the clinical data of all patients admitted with the ICD diagnosis T75.4 (effects of electric current) to a University hospital in Berlin during a period of eight years were retrospectively analyzed for the incidence of delayed cardiac arrhythmias.

The present study represents a secondary analysis of data from the hospital information system (HIS) and patient records. The clinical data of all patients admitted with the ICD diagnosis T75.4 (effects of electric current) to the Charité Berlin—Campus Virchow Medical Center between January 2001 and December 2008 were included in the analysis. No age limitations were applied. Patient identification was based on the ICD codes recorded in the HIS; an automatic search covering the above mentioned period was performed with the help of the IT department. Both primary and secondary diagnoses were included in this search.

The study period was chosen in this way because the electronic documentation of diagnoses in the HIS started no earlier than January 2001.

During the study period, 268 patients were admitted with the diagnosis ICD T75.4 (effects of electric current). Median patient age was 23 years (interquartile range: 6 to 35 years); the youngest patient was aged 10 months, the oldest 92 years. The majority of patients were male (Figure 1).

The main patient characteristics, separate for the subgroups pediatric (aged 0–17 years) and adult patients (aged 18 years and over), are provided in the Table.

The majority of electrical injuries occur in a domestic environment (63.1%; n = 169). However, among adult patients the percentage of workplace accidents was significantly higher than that of accidents at home (61.4%; n = 94). In only 10.4% (children 13.0%, n = 15; adults 8.5%, n = 13) of cases, the accident was caused by a defective device or faulty material; in all other cases, improper use and human error were responsible for the electrical injuries. In 99.6% of patients, alternating current (AC) was the cause of the accidental injury.

In 2.6% (n = 7) of patients, a family history positive for cardiovascular disease was documented (65.3% not stated). The patients’ pre-existing conditions are listed in the Table. At the time of accident, 5 patients were pregnant.

In 61.2% (n = 164) of patients a follow-up ECG was recorded where the following abnormalities were found:

In altogether 16 patients, echocardiography was performed after admission; in 5 patients, abnormalities were detected, such as a small pericardial effusion, a thin fluid space in front of the right ventricle, a pre-existing heart valve defect, or a mild coarctation of the aorta.

All patients received continuous cardiac monitoring during their hospital stay.

In one child with numerous preexisting cardiac defects, monitoring revealed an episode of nocturnal sinus bradycardia with 51 bpm which did not require treatment. None of the patients developed higher grade arrhythmias or arrhythmias requiring treatment.

According to the ERC criteria (ERC, European Resuscitation Council), which require cardiac monitoring, the following risk factors were found in our patient cohort:

The complicating factors for all patients – and broken down for pediatric and adult patients – are provided in the eTable. The case illustration provides a typical example of a high-risk patient after electrical injury.

In this secondary data analysis, based on hospital data from all 268 patients admitted to hospital because of electrical injuries during the 8-year study period, none of the patients developed cardiac arrhythmia requiring treatment during their hospital stay, even though all ERC risk factors requiring cardiac monitoring were present in our cohort.

All patients received continuous ECG monitoring after admission in an ICU or observation unit.

A small number of case reports addressing delayed arrhythmias after electrical injury have been published. Bailey describes a female patient discharged home after an electrical injury event who was found dead 10 hours later; even though no ECG was available, cardiac arrhythmia was assumed as cause of death (13).

A case series by Jensen et al. described three patients who developed delayed severe ventricular arrhythmias after a time period of 8 to 12 hours between accident and arrhythmia onset. All three patients developed recurrent episodes of ventricular arrhythmia over months or years (3). In another case report, a high-voltage electrical injury sustained 8 years ago was considered to be the cause of newly diagnosed sick sinus syndrome that, however, had been causing symptoms ever since the accident (6).

Sharma et al. described a patient who, after a domestic electrical injury, was admitted to hospital with a first-degree AV block and low voltage showing in the ECG. During 24-hour monitoring, initially changing types of AV blocks developed 2 hours after admission, ultimately followed by ventricular fibrillation on the next day (4). This last case is the only case of the altogether 6 patients described here for whom an initial ECG was available; for all other patients, either no ECG or only ECGs obtained in connection with the occurrence of delayed arrhythmia were available (5).

The results of our study confirm the findings of numerous, generally small clinical studies which have so far been published on the topic:

In 1997, Arrowsmith et al. published a retrospective analysis based on the data of all 145 electrical injury patients admitted to hospital during the study period of 5 years; 75% of their patients received cardiopulmonary monitoring over at least 24 hours. In their cohort, four patients showed cardiac abnormalities; three of these patients had isolated supraventricular extrasystoles not requiring treatment. Already on hospital admission, one patient with a high-voltage electrical injury showed atrial fibrillation which was treated with digoxin. Of the four patients with ECG changes, two had experienced a high-voltage accident; all four patients suffered burns as a result of electrical injury. None of the patients included in the analysis developed higher-grade arrhythmias during the monitoring period (7). Bailey et al. conducted a prospective study in 2007 which included 134 high-risk patients after electric shock. In their study, a transthoracic pathway of the electric current, tetanic muscular contractions, unconsciousness, and high-voltage accidents (>1000 V) were regarded as risk factors. Even though 11% of the patients (n = 15) showed mild ECG changes on admission, none of them developed potentially life-threatening delayed arrhythmias during their further clinical course. None of the ECG changes required treatment (11). The same authors documented the results of cardiac monitoring in 141 children after domestic accidents—here, again, no delayed arrhythmias were observed (8).

A further case series by Gokdemir et al. analyzed the data from 36 children (<18 years) with electrical injury. Of these, 5 children died in hospital; among these, signs of shock, sinus tachycardia, unconsciousness, and elevated LDH levels were more frequently observed in comparison with the surviving children. Delayed arrhythmias were not described (15).

Also of interest is a study by Blackwell et al. where the authors conducted a prospective analysis of presentations to the emergency department after low-voltage electrical injury and developed a management protocol to ensure standardized care for these patients. In a 3-year observational study 212 patients presenting to the emergency department were included with a 4-year follow up after implementation of the new protocol, i.e., potential cardiac arrhythmias were documented and the new algorithm was evaluated. Asymptomatic patients without ECG changes were not admitted to hospital and received no cardiac monitoring. Using the new protocol, the authors achieved a substantial reduction in the number of hospital admissions without any negative impact on patient health (9). On the basis on this study, a standardized approach is conceivable, combining the ERC recommendations with the criteria evaluated by Blackwell et al. (Figure 2). Consequently, patients with at least one of the ERC risk factors (initial cardiac arrest, initial unconsciousness, soft-tissue damage, and burns) would be admitted to hospital immediately. An exemption would be the ERC criterion “ECG changes” which would trigger a separate algorithm in line with Blackwell et al: patients with ECG changes would initially receive monitoring over a period of six hours. If the ECG changes disappear and the patient continues to feel well, the patient could be discharged; if not, the patient would be admitted to hospital for further cardiac monitoring.

In contrast, asymptomatic patients with no ERC risk factors and no ECG changes would be directly discharged from hospital; they would not receive cardiac monitoring.

An evidence-based, standardized protocol for the management of electrical injuries should be established to ensure cost-efficient and safe patient care. So far, none of the systematic analyses based on higher case numbers of patients who sustained electrical injuries could confirm a case with delayed arrhythmia. Our study adds to the existing evidence on the topic indicating that asymptomatic, uninjured patients without ECG changes do not require hospital-based monitoring.

The data used for this study are secondary standard care data which were not collected for research purposes. Even though the number of patients included in our analysis is relatively high compared to other studies on the topic, the case number is not sufficient to allow reliable statements on the occurrence of delayed arrhythmias after electrical injury, especially since it can be assumed that the incidence of such events is extremely low. Thus, this study should be regarded as an attempt to contribute to the collection of the evidence.

Ms Maaß is an employee of Streit GmbH. 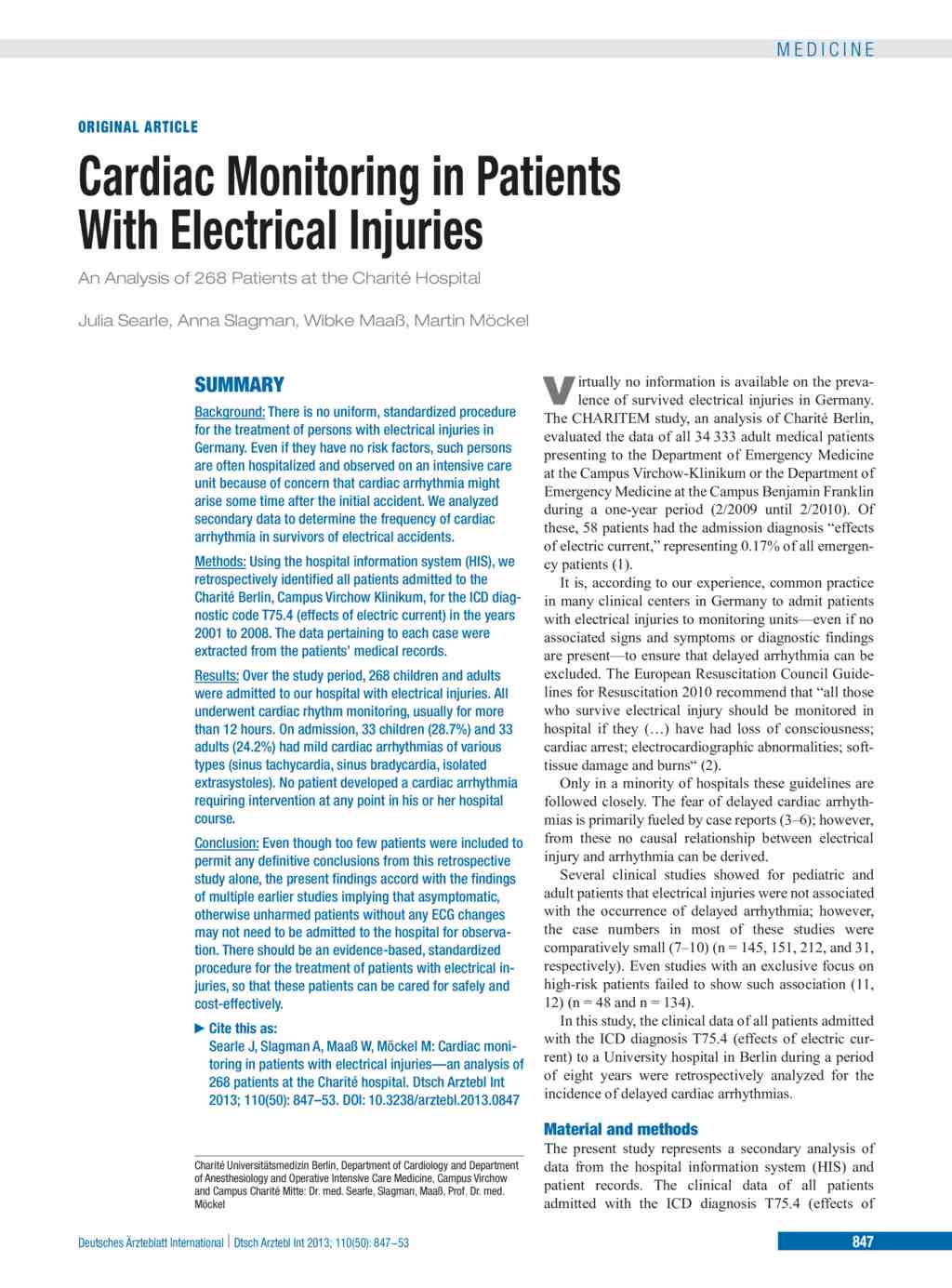