Dr. Bämayr points out that the diagnostic criteria for post-traumatic disorders in the ICD-10 reflect some forms of stress to an unsatisfactory degree. It should be borne in mind that these categories include a multitude of traumatizations and stresses of different grades of severity, but this does not mean these are incorrect because they do not spell out each individual one. It is unfortunate that some patients interpret the term “adjustment disorder” as an accusation. In the ICD-10, the term “adjustment disorder” describes a “reaction,” and several stressors may be present; it is by no means intended to be an accusation. Rather, it characterizes the mental overload that challenges the individual’s personal coping strategies throughout the stressful situation. The potential cumulative effects of stressors is taken into account in the DSM-5 in the trauma A criterion for PTSD as well as for the adjustment disorders.

Dr. Ebner points out the incomplete list of DSM criteria for PTSD in the article. As the complete presentation of the DSM alone would have gone far beyond the scope of the article, we summarized the criteria in key words. The term “potentially life threatening” was intended to include the concrete situations laid out by Dr Ebner. We did not mention explicitly that this experience can also include witnessing a traumatic event, with all the psychological sequelae afterwards.

Dr. Weigel also points out that our summary of the examples for traumatizations could have been far more detailed, as in the German S3 guideline, for example.

She limits the treatment with SSRIs to depression, which often accompanies PTSD. In doing so she does not take into consideration that the effectiveness of the SSRIs does not solely extend to depression but to all three symptoms clusters of DSM-IV-PTSD. Pharmacotherapy using the SSRIs sertraline or paroxetine alone is effective in PTSD. In spite of this, from a clinical perspective, the S3 guideline from the Association of Scientific Medical Societies in Germany (AWMF) regards psychotherapy as the first-line treatment.

The problem with psychodynamic therapies lies in the fact that their effectiveness has not been the subject of much scientific study. A single study from 1989, with a small number of cases, was conducted as a randomized controlled trial. And the only study of the effectiveness of inpatient psychodynamic imaginative trauma therapy (PITT) showed only small effect sizes. This is not to say that these approaches are ineffective. They merely have not been subject to enough scientific study; what is urgently required is for this situation to improve and change, so that more studies are undertaken, in much the way that approaches such as cognitive behavioral therapy, EMDR, and other therapeutic methods are being evaluated.

Unfortunately, robust data are lacking to answer the last mentioned and clinically important question regarding the criteria for differential indications—that is, which therapy should be used in which constellation of symptoms.

Dr. Brdiczka puts PTSD into context with type 1 traumata and regards the concept as too narrow. How, then, can it be explained that using this concept and the trauma-focused therapies derived from it achieved a substantial reduction in symptoms and clinical improvement within a short time even in those patients whose treatment Dr Brdiczka suspects of being “contraindicated” and potentially “massively harmful”? Consideration of some of the mentioned problems did, after all, result in an additional symptom cluster being introduced to the DSM-V and in the recommendation to introduce “complex PTSD” in the ICD-11. Although this makes perfect sense for many clinicians, it is still scientifically controversial.

Another question relates to the term “cure.” In the studies we referred to, this term was not the object of study, and neither was the definition of a cure from trauma. A substantial reduction of symptoms was the primary objective in the studies investigating psychotherapy as well as those investigating pharmacotherapy. In the therapies found to be most successful, both categories are achieved to a relevant degree in about two-thirds of cases. Many chronically ill patients continue to have symptoms. Once some important therapeutic objectives have been achieved, the trauma loses its horror and can be better integrated into the individual’s biography; handling everyday life in an appropriate manner becomes possible again.

Classification systems are always an expression of the insights and influences of their time.

DSM-V as well as the changes planned for ICD-11 characterize the continual developments in the subject of psychotraumatology, but they will not be able to clarify all the controversial points of view expressed in the correspondence.

In conclusion, each topic mentioned in our article could have been presented in much more detail. We provided an extensive list of references and relevant literature for those who want to explore the subject in greater detail.

Dr. Frommberger has received reimbursement of conference fees and travel expenses from Servier, Astra-Zeneca, Lilly, Janssen-Cilag, GlaxoSmithKline, and Pfizer. He has received lecture fees from Astra-Zeneca and Servier. He is a supervisor and assistant professor at the Freiburg Behavioral Therapy Training Institute. 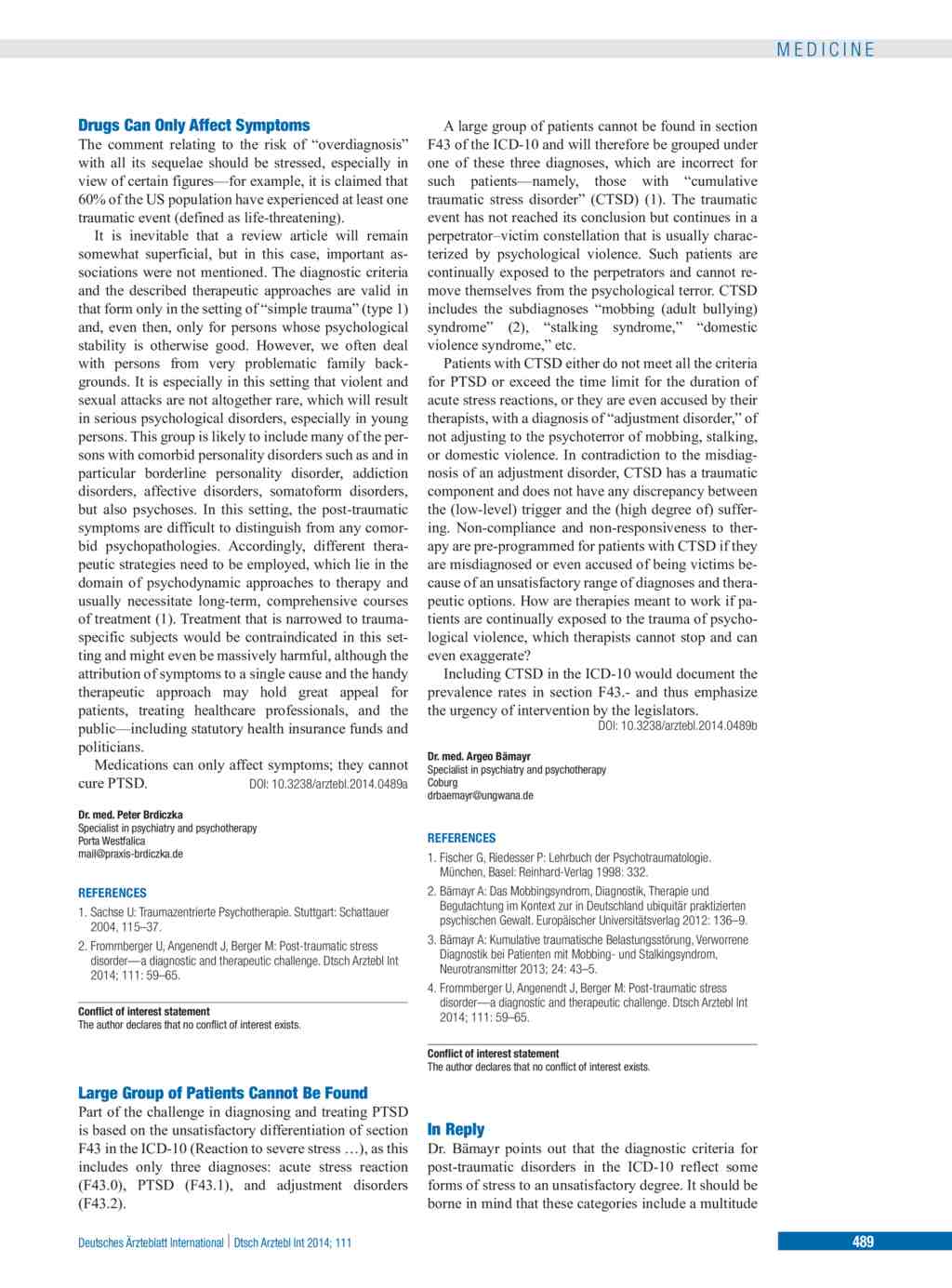