The Prognostic Significance of Respiratory Rate in Patients With Pneumonia

Methods: We retrospectively analyzed data from the external quality-assurance program for community-acquired pneumonia for the years 2010–2012. All patients aged 18 years or older who were not mechanically ventilated on admission were included in the analysis. Logistic regression was used to determine the significance of the respiratory rate as a risk factor for in-hospital mortality.

Conclusion: Respiratory rate is an independent risk marker for in-hospital mortality in community-acquired pneumonia. It should be measured when patients are admitted to the hospital with pneumonia and other acute conditions.

Measuring the respiratory rate is an important and simple tool for assessing the severity of acute cardiorespiratory and metabolic diseases.

Since the introduction of mandatory external quality assurance in 2005, the respiratory rate of patients with community-acquired pneumonia is recorded on admission and on discharge. The objective of this analysis is to study the prognostic significance of the respiratory rate based on the external quality assurance data collected from an unselected patient population with community-acquired pneumonia.

Data of the mandatory external quality assurance from 2010 to 2012 in the clinical area Community-acquired pneumonia were analyzed. The data set includes all adults (≥18 years) who received inpatient treatment in a German hospital with the principal diagnosis of community-acquired pneumonia. Patients were identified based on the ICD code of the DRG (Diagnosebezogene Fallgruppen, German Diagnosis-Related Groups) coding with pneumonia as principal diagnosis (eBox 1). Patients with severe immunodeficiency (such as leukemia or HIV infection) and hospital-acquired pneumonias (eBox 2) were excluded. Data were collected on type of admission (from nursing facility, hospital or rehabilitation facility), bedridden state, state of consciousness, respiratory rate and blood pressure on hospital admission (eFigure 1). The method how to measure the respiratory rate or the procedure is not prescribed. The breaths should be counted over a period of at least 30 seconds, ideally of one minute. In the 2010 data year, logistic regressions were first introduced to promote fair risk comparison (for example between hospitals), taking into consideration (nearly) all patients admitted with community-acquired pneumonia. With this method, the impact of the respiratory rate can be analyzed while simultaneously taking into account/adjusting other prognostic factors. Based on this approach, the following risk-adjusted analyses were performed (16).

To evaluate the respiratory rate on admission as a risk factor for hospital mortality, a logistic regression was performed including all patients (≥18 years) who did not receive mechanical ventilation at the time of admission. Adjustments were performed on the following parameters: age, sex, admission from nursing facility, hospital or rehabilitation facility, bedridden state, state of consciousness, and blood pressure on hospital admission. Calculation of the hospital standardized mortality ratio (HSMR) in relation to respiratory rate was based on these risk factors used in the model. These were included in the standardization with the respective regression coefficient. Patients without records of the respiratory rate and/or the blood pressure on admission, patients with implausible blood pressure values (<20 mmHg) and respiratory rates (<6/min or >49/min) were excluded.

Between 2010 and 2012, altogether 705 928 adult patients were treated on an in-patient basis for community acquired pneumonia. With 67.1 million adults (≥18 years) living in Germany, this represents an average annual incidence of hospital admissions for pneumonia of 3.5 per 1000 inhabitants above 18 years. Of these patients, 13.1% (92 277) died during their hospital stays. 692 950 patients were not ventilated on admission. For 643 356 of the remaining patients, admission respiratory rate data were available; of these, 641 661 patients had plausible values, i.e. an admission respiratory rate between 6/min and 49/min and a systolic blood pressure of more than 20 mmHg. Of these evaluable 641 661 patients, 80 293 died (12.5%).

Respiratory rate and prognosis in pneumonia

With over 230 000 hospital admissions per year, community-acquired pneumonia is one of the most common acute conditions in German hospitals. More than 10% of these patients die during their hospital stay (www.sqg.de/ergebnisse/leistungsbereiche/ambulant-erworbene-pneumonie.html). Due to the large numbers and the high mortality among these patients, an early and rather simple prognostic assessment is required. Measuring the respiratory rate on admission is well suited for early risk stratification: Both decreased and increased respiratory rates on admission are associated with significantly increased hospital mortality rates. A comparatively mild tachypnea of 21–23/min already yields an odds ratio of 1.20 (95% CI: 1.17–1.23). The risk of dying rises further with increasing respiratory rate: with respiratory rates above 33/min the odds ratio is 2.55 (Table 2).

This relationship between mortality and respiratory rate on admission was first reported in a survey of the British Thoracic Society with 453 pneumonia patients which was published in 1987 (1). It can also be demonstrated in Germany (Figure).

The most commonly used method to determine the respiratory rate is discontinuous manual measurement by counting the respiratory chest movements (via inspection or auscultation). In adult patients, the respiratory rate can also be measured manually with sufficient reliability (good intra- and inter-observer reliability) (29, 30). Taking into consideration the variability of breathing, a period of at least 30 seconds should be allowed for measuring. Even more accurate results can be obtained by counting the respiratory rate over a period of 60 seconds or in two blocks of 30 second intervals (31). Capnography, the measurement of CO2 concentrations in the expired air, is considered the gold standard of continuous monitoring. Alternative technologies include impedance pneumography (recording of chest impedance changes during in- and expiration by means of chest wall electrodes) or the detection of breathing-induced amplitude modulation of R-waves in electocardiography (ECG), among others. Impedance pneumography is commonly used along with continuous ECG monitoring; measurements are reliable as long as interfering factors, such as wrong electrode placement, coughing or excessive patient movements, are excluded (32).

One important limitation of the study is the diagnosis of community-acquired pneumonia using the coded principal diagnosis and the exclusion of hospital-acquired pneumonias and pneumonias associated with severe immunodeficiency using coded secondary diagnoses. Pneumonia patients coded with another principal diagnosis (e.g. sepsis) may have been missed, while patients with hospital-acquired pneumonias or severe immunodeficiency may have been included if the secondary diagnosis was not coded. The impact of comorbidities could not be included in the analysis of independent risk factors for hospital mortality as these were not systematically recorded with this method. This is one of the reasons why the adjustment only has a moderate Nagelkerke’s pseudo-R2.

The validity of the analyzed data depends on the validity of the measuring method and the quality of documentation. While for parameters such as age or survival a high level of validity can be expected, a higher error rate has to be assumed for the measurement and documentation of the respiratory rate, for example. With more than 200 000 data sets per year from over 1200 hospitals, reviewing individual cases is not possible. Thus, implausible values or values under 6/min or above 49/min which, based on clinical experience, are rather difficult to measure accurately were excluded from this study. In the actual quality assurance program, statistical abnormality identification with feedback to the affected hospitals (“structured dialogue“) and random sampling with second acquisition of selected data fields were used for data validation. Moreover, with quality assurance in the clinical area Pneumonia in place since 2005, the participants were familiar with it. A particular strength of this study is that virtually all hospitalized patients in Germany with community-acquired pneumonia were included.

Potential for improvement and conclusion

Measuring the respiratory rate is a simple and reliable tool to assess the prognosis in patients with pneumonia and other acute diseases.

Studies and also the discussion related to the external quality assurance in the clinical area Pneumonia show that measuring and documenting the respiratory rate is still not generally accepted (11–15).

To improve the measurement and documentation of vital signs in general and of the respiratory rate in particular, more awareness of their proven importance for patient care should be raised among nurses and doctors during their education and training. Training to this effect has been proven to result in significant improvements. For example, training and audits as part of the implementation of an “early-warning system” on general wards increased the level of respiratory rate documentation from 30% to 91%, while in an emergency department environment, vital signs documentation climbed from 78% to 88% (33, 34).

All authors are members of the Federal Experts’ Working Group on Pneumonia of the AQUA Institute. 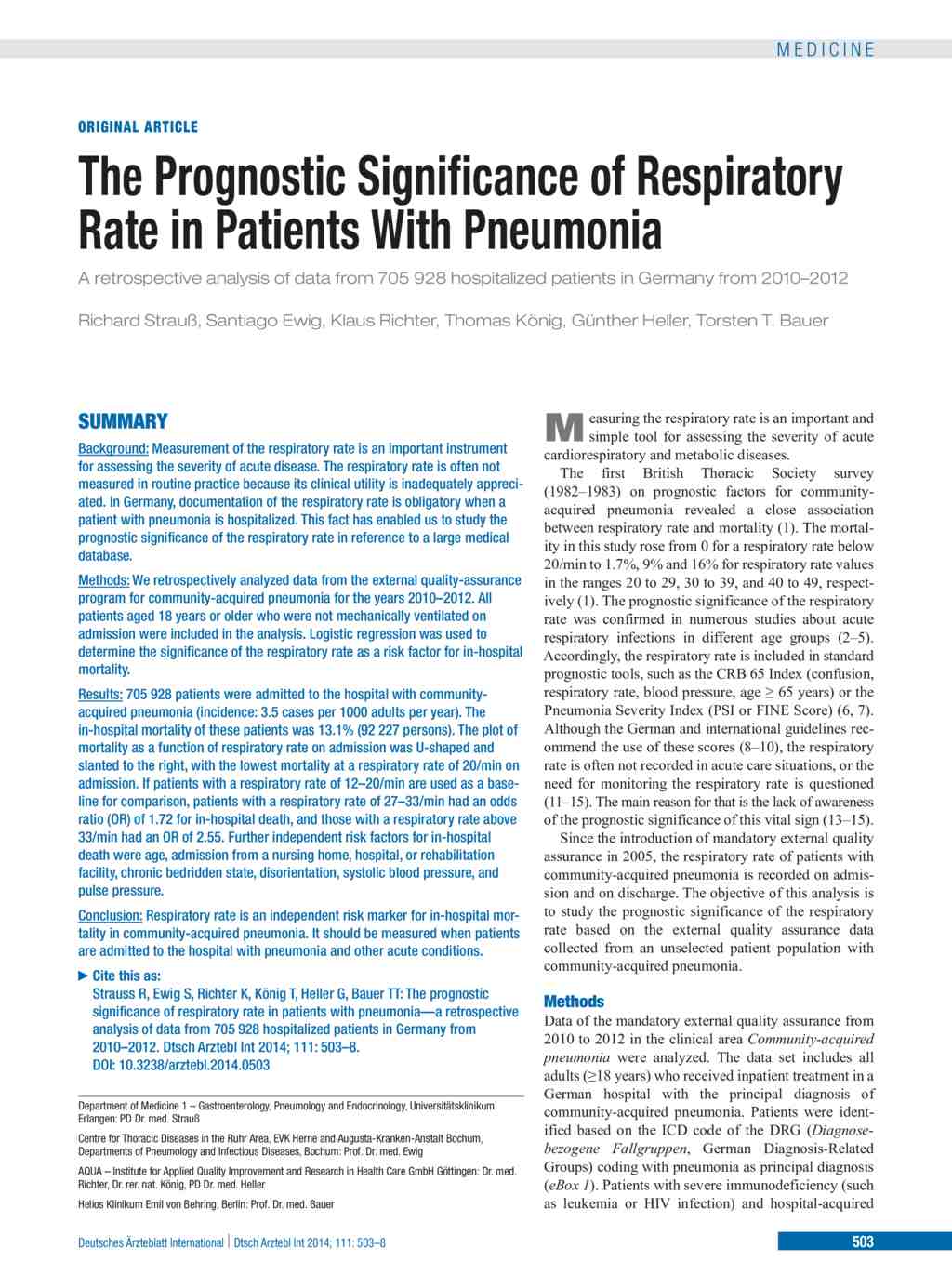