The fact that familial hypercholesterolemia patients have massively increased LDL cholesterol-dependent cardiovascular risk and that the increase in risk can be almost eliminated by consistently lowering LDL cholesterol is the most conclusive evidence yet found of the close causal relationship between elevated LDL cholesterol and atherosclerosis. Familial hypercholesterolemia therefore continues to fascinate both scientists and clinicians and drives new developments in diagnosis and treatment. This is described by Klose et al. in their article reviewing the current knowledge on this subject.

Anitschkow postulated as early as the beginning of the 20th century that elevated cholesterol levels play a vital role in the development of atherosclerosis (1). Research conducted in recent decades has shown that atherogenic potential is inherent in virtually all cases of elevated LDL cholesterol and that the risk of cardiovascular diseases can be reduced by approximately 30% if LDL cholesterol levels are lowered, particularly using statins (2). The absolute risk for a cardiovascular event plays a major role in assessing what level of LDL cholesterol requires treatment. This risk is higher in individuals with confirmed atherosclerosis or additional risk factors, so in such cases the target LDL cholesterol level is lower (e.g. less than 70 mg/dL in patients with confirmed coronary heart disease [CHD]) or more intensive statin therapy is indicated (3, 4).

Individuals with familial hypercholesterolemia have significantly elevated LDL cholesterol from birth onwards, so their absolute risk is 8 to 10 times greater (depending on the LDL cholesterol level) than that of individuals with normal lipid metabolism (5). Treatment must be provided early and consistently, independently of other risk factors; this can achieve a major reduction in the rate of myocardial infarctions. The data available on this subject, a great deal of which comes from the Netherlands and South Africa, is convincing: early, consistent treatment leads to almost normal life expectancy (6, 7). This makes early diagnosis, before any manifestation of atherosclerosis if possible, even more important.

The significance of cascade screening

Screening relatives of individuals with familial hypercholesterolemia is extremely important in this context. Because heredity is autosomal dominant, an average of 50% of an index patient’s first-degree relatives are also affected by familial hypercholesterolemia. Such a screening procedure, called cascade screening, makes it possible to provide early preventive treatment for patients’ relatives. Although statin therapy is currently standard treatment for cardiology patients with familial hypercholesterolemia, the potential of screening is still overlooked (8). All too often, the opportunity to search for other affected individuals among the relatives of an identified patient, and then to provide them with sustained treatment, is not taken. Treatment is needed in such cases in order not to miss chances for early prevention.

The value of molecular genetic diagnostics

The review article by Klose et al. rightly discusses the value of molecular genetic diagnostics (9). Although such diagnostic procedures are the standard in some European countries, such as the Netherlands, they are the exception in most countries, including Germany. As undisputed as the value of genetic diagnostics is scientifically, its clinical value is still an open question, as it remains expensive. Evidence of a mutation can be useful in increasing acceptance of the disease in those who suffer from it, and this in turn leads to better treatment compliance. Better compliance is itself associated with a lower rate of myocardial infarctions (10). Clinical measures, however, are not directly affected by evidence of a mutation. It is primarily the phenotype (elevated LDL cholesterol), not the genotype (evidence of a mutation), that is treated. It is also unclear what action should be taken in individuals who present the phenotype of familial hypercholesterolemia but do not have an identifiable mutation. Should such patients receive different treatment from those who present identically except for having an identifiable mutation? Ultimately, it is the clinician who must decide; and clinicians will quite rightly be guided by LDL levels. Decisions as to whether or not molecular genetic diagnostics should be performed must also take into account that a genetically identified disorder may have social law-related repercussions affecting areas such as choice of occupation, civil servant status, or life insurance.

He has received fees for contributing to continuing medical education events from Abbott, Amgen, Fresenius, Genzyme, Kaneka, MSD, and Sanofi.

He has received reimbursement of conference fees and of travel and accommodation expenses from MSD.

He has received payment into a third-party account for a research project he himself initiated from Genzyme, MSD, and Novartis. 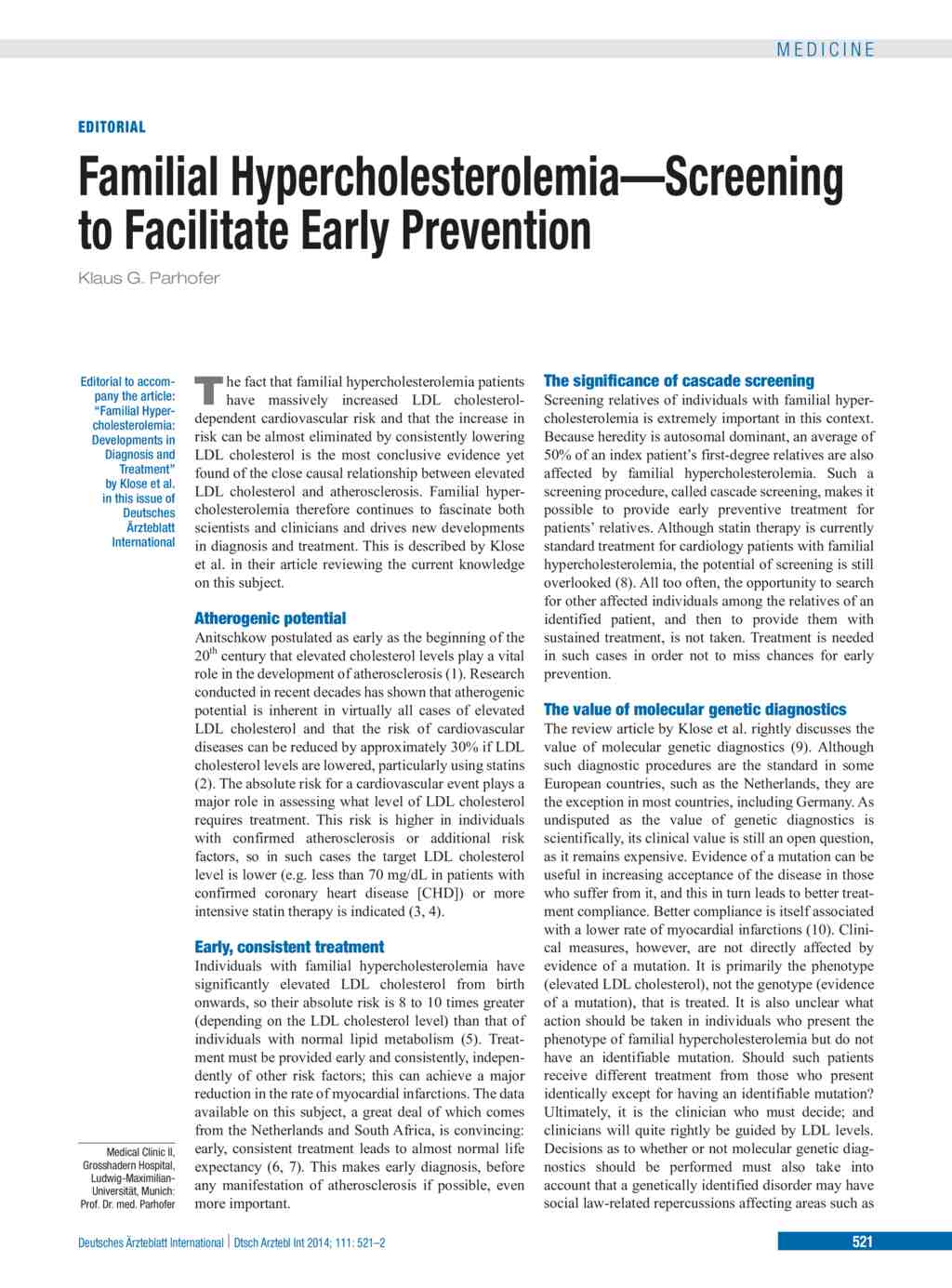