All over the world, demographic changes and medical advances have given rise to concern over the future ability of society to pay for health care.

Here in Germany, our health-care system is easily accessible to all and provides efficient and high-quality care in both the inpatient and the outpatient sectors. Changes in health-care law have been introduced at regular intervals since the 1970s to limit costs and raise efficiency. Each new regulation creates new incentives, some of which will be undesirable. Thus, laws and proposed laws must be critically analyzed, so that the necessary changes and adjustments can be discussed.

As soon as the minimum caseload requirements were introduced in Germany, there was not only a lively debate about the questionable underlying evidence, particularly about threshold values, but also a fear that the new rules would create a false incentive toward increasing the quantity of care delivered.

Lack of a major effect on care structures

After 10 years of debate about minimum caseload requirements, the articles by de Cruppé et al. (1) and Peschke et al. (2) now provide comprehensive data that will be of immediate interest to all affected persons in the health-care system.

For all the limitations of these two studies, for all the differences between them in methods of data acquisition and analysis, and despite the very different types of procedure that they considered (ranging from transplantation surgery performed in a small number of hospitals, to major visceral procedures, to total knee replacement, to the care of low-birth-weight neonates), the common central finding of both studies stands out clearly: after they had been in effect for seven years, minimum caseload requirements still had no major effect on care structures in this country.

Are minimum caseload requirements, then, simply a failure? The answer depends on what they were intended to achieve in the first place:

The last-mentioned outcome has been seen, irrespective of minimum caseload requirements, only in specialized areas where the service in question could not be provided economically (pancreatic and esophageal resection) or where there was a staff shortage (perinatal medicine).

The accompanying research that was planned, when minimum caseload requirements were introduced, in order to document their effects now fills numerous filing cabinets, but it has not clearly demonstrated any resulting qualitative improvement (3). We know, too, that good care is sometimes delivered in institutions where the caseload is small (4).

Experience as a major determinant of quality

The surgical literature on the quality of care reveals that the major determinants of outcome quality, particularly for complex treatments (of which total knee replacement is not one), are the following (5):

Therefore, the decisive factor is the willingness of those who direct health-care policy and hospital planning to establish structural requirements, and, if these are not being met, to see to it that they are implemented. Just setting a relatively low threshold, while simultaneously granting exemptions to it, only creates an incentive to rise to the threshold—e.g., by raising the volume of pancreatectomies or total knee replacements, perhaps by operating for less stringent indications, and/or by introducing questionable changes in documentation practices. For example, quality-assurance data from the German federal state of Bavaria reveal a disproportionately large number of neonates in the birth-weight group just below the threshold value used in the DRG system, while the number in the group just above it is “inexplicably” low.

Minimum caseload requirements are unsuitable for achieving the ethically desirable goal of rational centralization. This goal, however, is of vital importance, in view of all of the following:

Instead of trying to achieve rational centralization, the responsible authorities are confusing the quality debate with speculations about pay for performance schemes, such as those that have been in place since 2004 in the United Kingdom—where they have brought about a great deal of change in the behavior of providers, but hardly any improvement in the quality of care (6).

It would be more honest, and more efficient from the patients’ point of view, if the responsible authorities were to come out clearly in favor of quality-enhancing measures (including by granting financial support for them), and if they were to create public transparency regarding the quality of outcomes, independently of the mode of hospital financing. This would, however, require all sides to commit themselves in earnest to hospital planning that is oriented to the real needs of the population for the years ahead.

As long as financial pressure still distracts the authorities from the real issues at hand, so that they keep on taking pointless actions that cannot lead to any desirable outcome, our desire for all parties concerned to get down to business and improve the quality of medical care will remain no more than a pious hope. 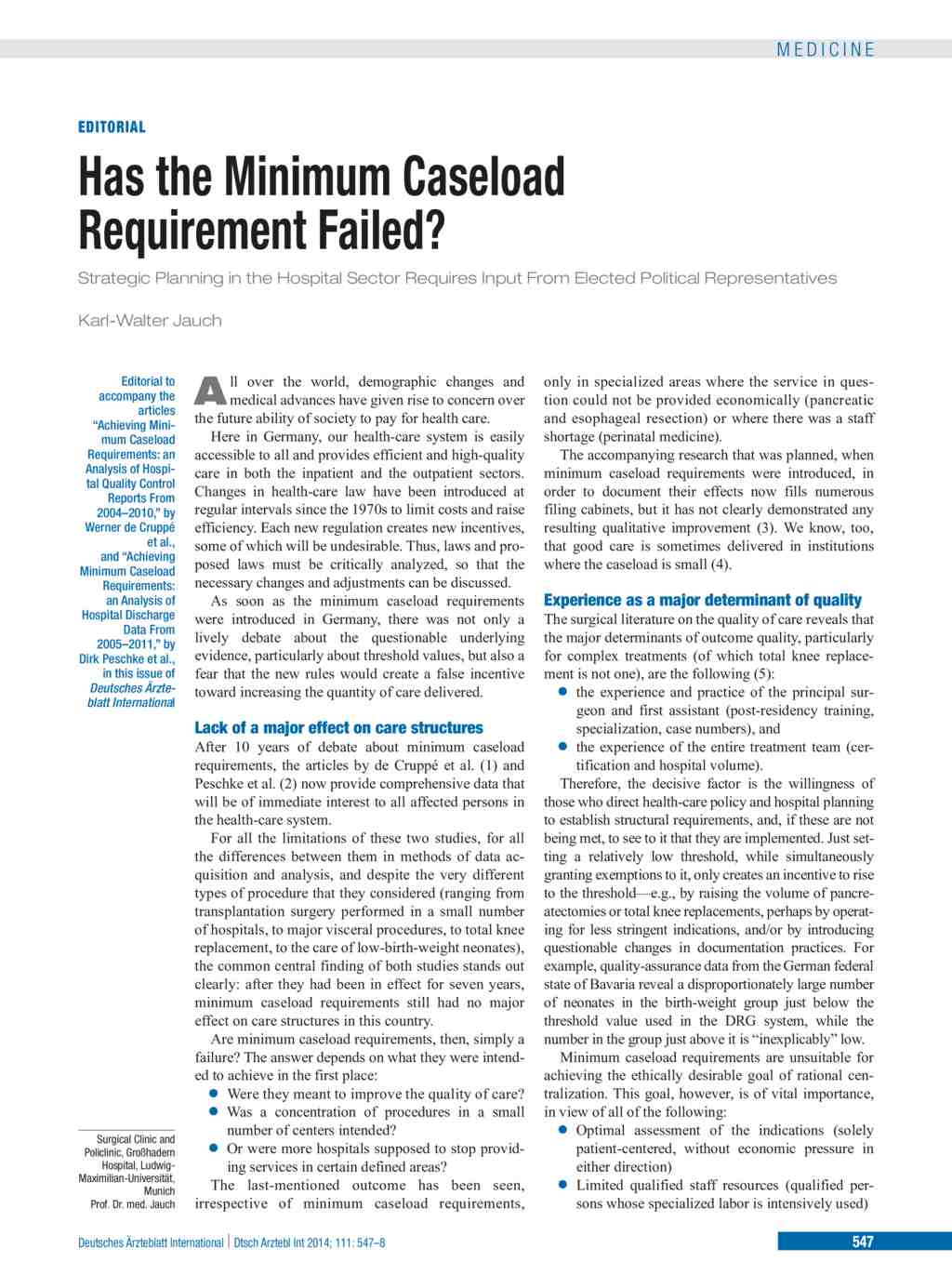