Background: The German Federal Joint Committee (the highest decision-making body of physicians and health insurance funds in Germany) has established minimum caseload requirements with the goal of improving patient care. Such requirements have been in place for five types of surgical procedure since 2004 and were introduced for total knee endoprosthesis surgery in 2006 and for the care of low-birth-weight neonates (weighing less than 1250 g) in 2010.

Method: We analyzed data from German nationwide DRG statistics (DRG = diagnosis-related groups) for the years 2005–2011. The procedures that were performed were identified on the basis of their operation and procedure codes, and the low-birth-weight neonates on the basis of their birth weight and age. The treating facilities were distinguished from one another by their institutional identifying numbers, which were contained in the DRG database.

Conclusion: After taking account of the potential bias due to the identification of institutions by their institutional identifying numbers, we found no discernible effect of minimum caseload requirements on care structures over the seven-year period of observation, with the possible exception of a mild effect on pancreatic procedures.

Research on this topic to date has centered on changes in the care situation from 2004 to 2006. Over this period, there was no major change in the number of hospitals providing care, and 1% to 31% of patients (depending on the procedure) were operated on in hospitals that did not meet the minimum caseload requirement for the procedure in question (16).

Further changes in the care situation from 2006 onward have not been assessed until now. We therefore studied developments with respect to the affected procedures over the years 2005–2011. This study is based on hospital billing data; the billing units were identified on the basis of the institutional identifying numbers that the hospitals used for billing.

In this study, we performed a monitored remote data analysis on the complete federal DRG statistics (DRG = diagnosis-related groups) for individual cases that was obtained from the research data centers of the German federal and state statistical offices (17). The DRG statistics covered all hospitalizations billed according to the DRG system. Each of the ca. 17 million inpatient treatments carried out in Germany per year can be evaluated in this way. The main exceptions are psychiatric and psychosomatic cases, which are not covered by DRG statistics but are, in any case, irrelevant to the issue of minimum caseload requirements (for more on this, see eMethods). The documentation of every case included a main diagnosis, additional diagnoses, the procedures performed (coded according to the Operations and Procedures Classification—Operationen- und Prozedurenschlüssel, OPS), the reason for discharge, and the anonymized institutional identifying number of the hospital (18–21) (further details in eMethods).

Neonates weighing less than 1250 g at birth were identified in the database by their birth weight and an age of 28 days or less (22).

Treating (or, more precisely, billing) institutions were distinguished from one another by their institutional identifying numbers (Institutionskennzeichen, IK numbers). This was the basis for the tallying of case numbers for each institution. The German Federal Statistical Office considers a billing institution for the purpose of DRG statistics to be a “hospital providing inpatient services that are reimbursable in the DRG system (hospitals that are spread over multiple sites but have a single institutional identifying number are counted only once)” (23). The number of such billing institutions differs slightly from the number of hospitals contained in the register of basic data for German hospitals (Grunddaten der Krankenhäuser, [24]), which is usually cited as the number of hospitals in Germany.

In 2011, the register of basic data for German hospitals counted a total of 2045 hospitals, of which 1736 were general hospitals and the remaining 309 were either hospitals with exclusively psychiatric and psychotherapeutic (and also neurological) beds or else day clinics and night clinics, which are not subject to minimum caseload requirements and generally do not bill in the DRG system.

The DRG statistics for 2011 are derived from a total of 1601 billing institutions with different IK numbers. This number is a bit lower than the number of hospitals in the basic data register, although it should be remembered that not all general hospitals bill according to the DRG system. For reasons of data protection, we cannot determine what institutions account for the difference, as it is not permitted for individual hospitals to be identifiable.

Both collections of statistics revealed a drop in the number of hospitals over the course of the study. The basic hospital data showed that, in 2005 and 2011, there were 1846 and 1736 general hospitals, respectively; the DRG statistics for the same years contained 1,725 and 1,601 IK numbers, respectively). The current study is based on ‘billing institutions’ in the sense used in the DRG statistics. It should be borne in mind that one hospital can have multiple IK numbers, while, conversely, a single IK number can refer to treatment at multiple, geographically separated sites.

In eMethods, we describe additional subgroups of the types of procedures that were subject to minimum caseload requirements (eTable).

In 2011, 172 838 cases, or 1.0% of all inpatient cases in the DRG statistics, were subject to minimum caseload requirements. Depending on the type of procedure group, 16.1% to 68.4% of the performing institutions did not meet the minimum caseload requirements for the procedure in question; 4.5% of the 172 838 cases were performed in such institutions.

The number of cases per year rose for all types of procedure studied except the care of low-birth-weight neonates (Table 1). There was a continuous, significant decline in the number of institutions treating low-birth-weight neonates (from 465 to 347); this was the only such decline noted for any of the types of procedure subject to minimum caseload requirements. Accordingly, the percentage of institutions that met the minimum requirement of 14 low-birth-weight infants treated per year rose significantly from 31.6% in 2005 to 43.8% in 2011 (p<0.0001).

Table 2
Characteristics of patients and treating institutions, broken down by fulfillment or non-fulfillment of minimum caseload requirements
Enlarge All figures

The major strength of this study is the completeness of the database. The analyses presented here are based on complete billing data for each of the procedures in question, and, therefore, the parent population of all relevant inpatient cases was evaluated, rather than only a sample. The evaluation was thus hospital-independent and unaffected by the hospitals’ own determinations or self reporting as to whether they met the minimum caseload requirements (as found, for example, in the hospitals’ legally mandated quality-assurance reports).

On the other hand, the use of this extensive set of data also results in a major limitation of the study. In the DRG statistics of the German Federal Statistical Office, the distinction of one institution from another is made on the basis of IK numbers, i.e., the institutions considered in this study are single units with respect to billing. This definition does not correspond exactly to that of the approved German hospitals that can be found in other statistical databases.

As “hospitals” are defined differently in each database, studies based on different databases can yield divergent results not only regarding the overall number of hospitals, but also regarding the percentage of hospitals that met minimum caseload requirements for any particular type of procedure (see, for example, the article by von de Cruppé et al. in this issue [25]).

When interpreting the findings of this study and similar studies, one must bear in mind that the definitions of individual procedures covered by minimum caseload requirements may have changed over the period of observation in such a way as to affect the number of procedures subject to the requirement (e.g., hepatic transplantation, from 2005 to 2006); that some of the minimum caseload thresholds were increased by the G-BA between 2005 and 2006; and that hospitals performing pancreatic and esophageal surgery exclusively on children are exempt from such requirements. All of these things were considered in the present study.

With the use of these methods, this study of the seven types of procedure that were subject to minimum caseload requirements from 2005 to 2011 revealed that the percentage of patients treated in institutions that did not meet such requirements dropped significantly in response to the requirements for only one of the seven types of procedure, namely, complex pancreatic surgery. A comparable, steady drop over the years 2005 to 2011 was observed for the care of low-birth-weight neonates but cannot be considered an effect of the minimum caseload requirement, which, in this case, was not introduced until 2010.

It is, however, also conceivable that the monitoring and implementation mechanisms for minimum caseload requirements are currently inadequate because too little attention is paid to this matter in the annual budget negotiations of hospitals and health insurance carriers, and on the state governmental level.

The academic department of structural advancement and quality management in health care in which the authors work is funded by Helios Kliniken GmbH. 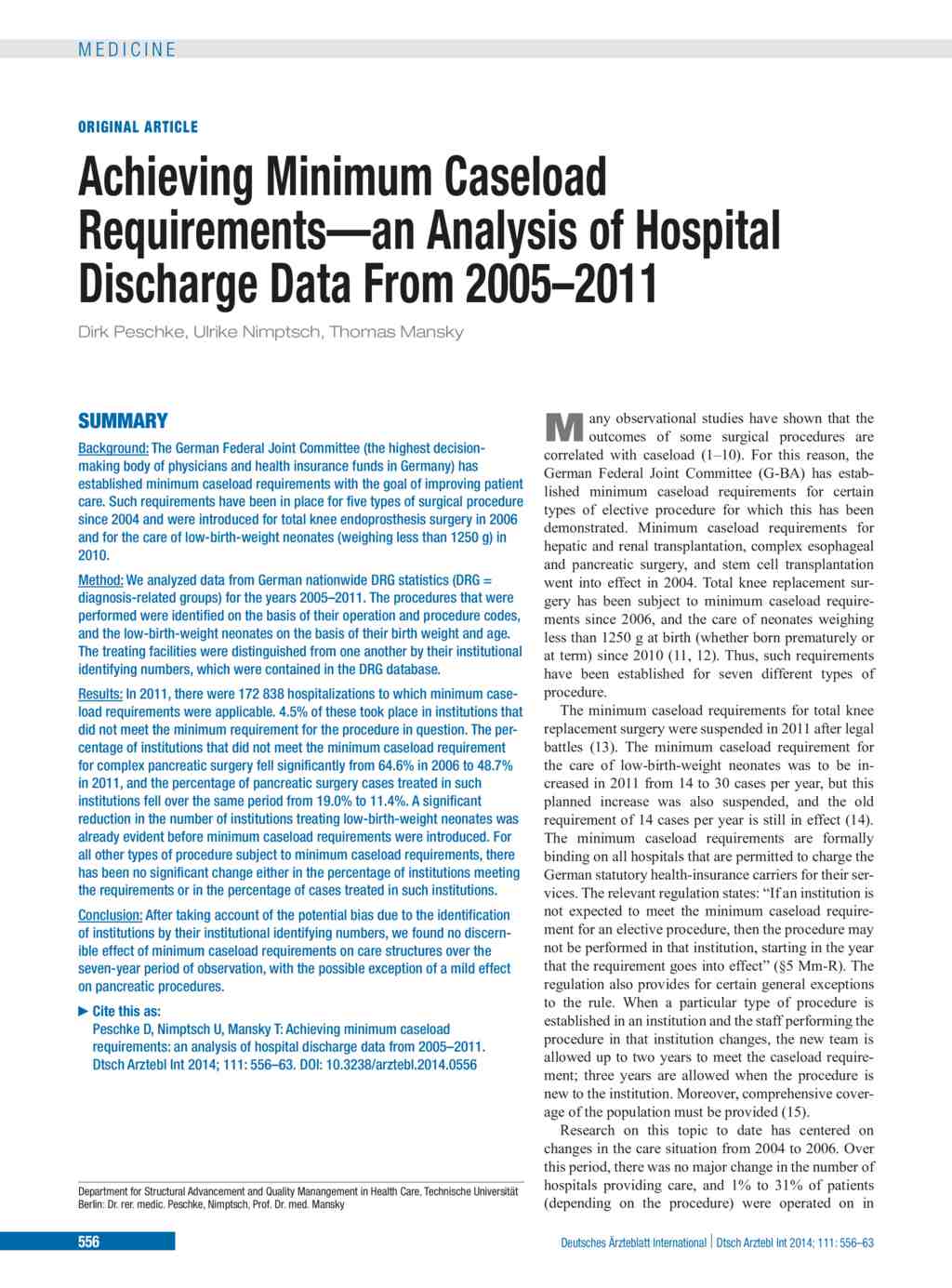