The authors explain the rare occurrence of invasive squamous cell cancers of the uterine cervix that was documented in this study (with an SIR of 1.0) with the success of gynecologic screening in the cohort under study and therefore recommend that analogous screening investigations should also be used to for the early detection of other HPV associated squamous cell cancers in immunosuppressed patients (1). We agree with this idea.

Professor Breuniger’s contribution to the discussion questions the value of photodynamic therapy (PDT) beyond its previously described value in immunosuppressed patients. In addition to pondering—in principle—the question of whether a modern skin cancer center should keep from its patients a therapeutic modality that has been described in the literature with a sound evidence base, we wish to point out that for most dermatologists the curettage—recommended as “monotherapy” in this letter — is obviously an already intrinsic part of the preparation for PDT. Our recommendation of PDT in immunosuppressed patients with pronounced actinic cutaneous carcinoses is based on the sound data for this small group of patients and is supported by others (2).

Obviously, in our outpatient clinic, many immunosuppressed patients, especially those with milder actinic keratoses (AK), are also treated successfully with topical diclofenac in hyaluronic acid or topical 5-FU, or—with a very strictly refined indication—off-label with imiquimod. Because of the wide spread and clinical intensity of actinic cutaneous carcinoses in immunosuppressed patients, we think that, for these tumors, reactive surgical management alone is hard to explain to high-risk patients, and in the meantime, cases have become known where patients explicitly refused repeated surgery for squamous cell cancer after dozens of preceding excisions, in full awareness of what the subsequent clinical course would be.

We wish to express our support for the undisputed value of complementary, mechanically destructive treatment for hyperkeratotic lesions, embedded into stringent topical treatment, as well as the absolute necessity of biopsy confirmation and excision of potentially invasive skin tumors (2).

Dr. Ulrich has received payment for serving on Advisory Boards for the Calderma, Novartis, Pfizer, and Meda companies, reimbursement of scientific meeting participation fees and travel costs from Pfizer, and research support (third-party funding) from Calderma and Wyeth. 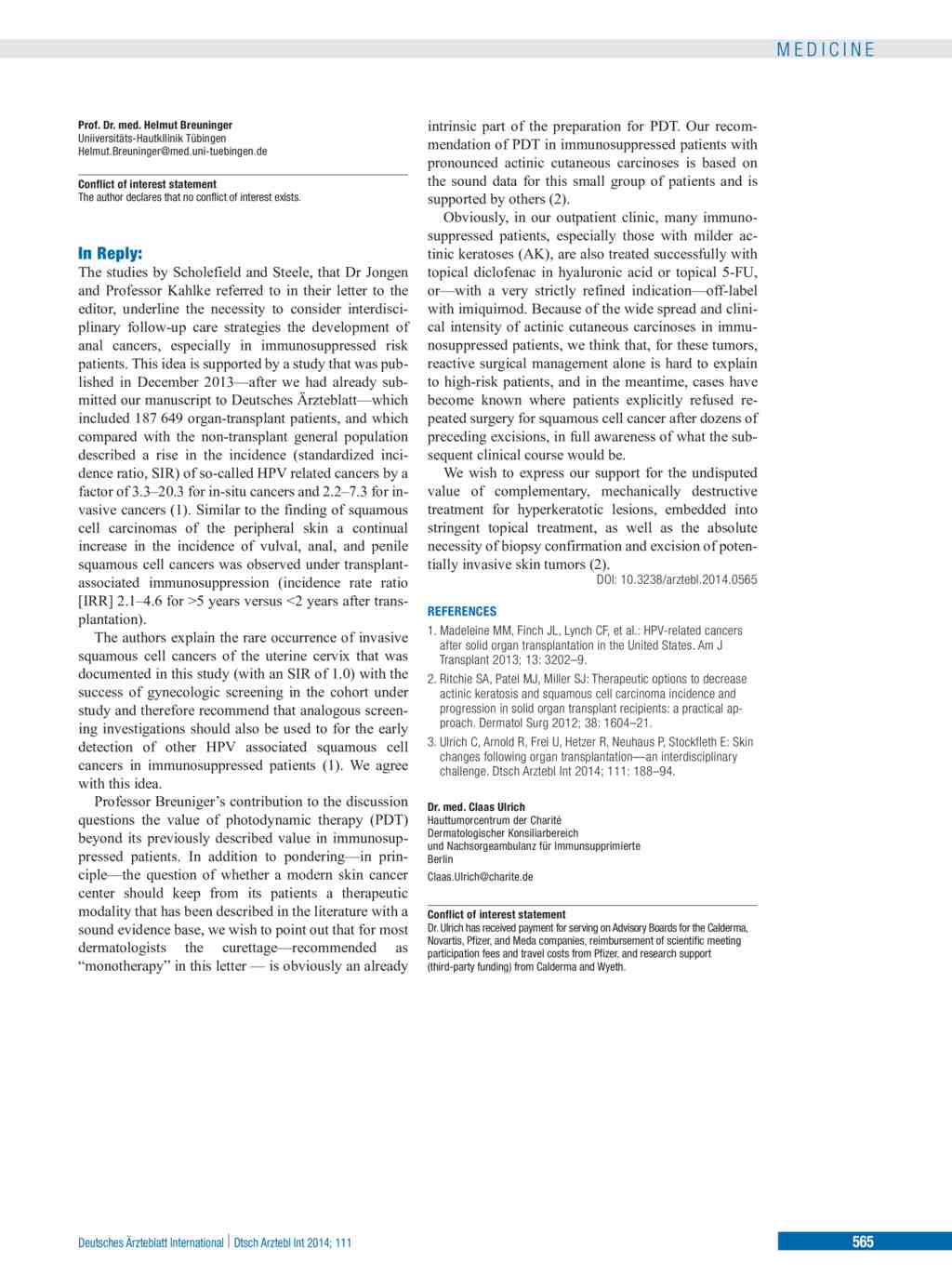