Results of a Retrospective Analysis

Background: The frequency of gender identity disorder is hard to determine; the number of gender reassignment operations and of court proceedings in accordance with the German Law on Transsexuality almost certainly do not fully reflect the underlying reality. There have been only a few studies on patient satisfaction with male-to-female gender reassignment surgery.

Conclusion: The very high rates of subjective satisfaction and the surgical outcomes indicate that gender reassignment surgery is beneficial. These findings must be interpreted with caution, however, because fewer than half of the questionnaires were returned.

Culturally, gender is considered an obvious, unambiguous dichotomy. The term “gender identity” denotes the consistency of one’s emotional and cognitive experience of one’s own gender and the objective manifestations of a particular gender. In gender identity disorder, one’s own anatomical sex is objectively perceived but is felt to be alien, whereas the term “gender incongruence” refers to a difference between an individual’s gender identity and prevailing cultural norms. Finally, gender dysphoria is the suffering that results. The treatment guidelines of the World Professional Association of Transgender Health (WPATH) state that gender identity need not coincide with anatomical sex as determined at birth. Transgender identity should therefore be considered neither negative nor pathological (1). Unfortunately, gender incongruence often leads to discrimination against the affected individual, which can favor the development of psychological complaints such as anxiety disorders and depression (2–4). While some transgender individuals are able to realize their gender identity without surgery, for many gender reassignment surgery is an essential, medically necessary step in the treatment of their gender dysphoria (5). Research conducted to date has shown that gender reassignment surgery has a positive effect on subjective wellbeing and sexual function (2, 6, 7). The surgical procedure (penile inversion with sensitive clitoroplasty) is described in eBox 1.

No official figures are available on the prevalence of transgender or gender-nonconforming individuals, and it is very difficult to arrive at a realistic estimate. There is no central reporting register in Germany. Furthermore, figures for those who seek medical help for gender dysphoria would in any case give only an imprecise idea of the true prevalence. The global prevalence of transgender individuals has been estimated at approximately 1 per 11 900 to 1 per 45 000 for male-to-female individuals and approximately 1 per 30 400 to 1 per 200 000 for female-to-male individuals (1). Weitze and Osburg estimate prevalence in Germany at 1 per 42 000 (8). In contrast, De Cuypere et al. (9) suppose a prevalence of 1 per 12 900 for Belgium. Biosnich et al. (10) estimate prevalence among US veterans at 1 per 4366. This compares to an estimated prevalence of 1 per 23 255 in the general population. Even if percentages of transgender individuals in different parts of the world are comparable, it is highly likely that cultural differences will lead to differing behavior and expression of gender identity, resulting in differing levels of gender dysphoria (1). The ratio of male-to-female to female-to-male transgender individuals varies greatly. Although it was given as approximately 3:1 by van Kesteren (11), it is 2.3:1 according to Weitze and Osburg (8) and 1.4:1 according to Dhejne (3). Garrels (12) found a gradual decrease in the difference between the two figures in Germany, with the ratio decreasing from 3.5:1 (in the 1950s and 60s) to 1.2:1 (1995 to 1998) (Table 1).

Transsexualism is primarily a problem of gender identity (transidentity) or gender role (transgenderism) rather than of sexuality (13). In Germany, it is diagnosed according to ICD-10 (10th revision of the International Statistical Classification of Diseases and Related Health Problems).

Criteria for diagnosis include the following:

According to Senf, no disruption to an individual’s identity is comparable in scale to the development of transsexualism (14). Transsexualism is a dynamic, biopsychosocial process which those affected cannot escape. An affected individual gradually becomes aware that he or she is living in the wrong body. The feeling of belonging to the opposite sex is experienced as an unchangeable, unequivocal identity (14, 15). The individual therefore strives to change his or her inner identity. This change is associated with a change in psychosocial role, and in most cases with hormonal and/or surgical reassignment of the body to the desired gender (14). Coping with the development of transsexualism poses enormous challenges to those affected and often leads to a considerable psychological burden. In some cases this results in mental illness. Transsexualism itself need not lead to a mental disorder (14). Psychotherapeutic support is beneficial and is a major part of standard treatment and the examination of transsexual individuals in Germany (15).

This study aimed to evaluate the effect of male-to-female gender reassignment surgery on the satisfaction of transgender patients.

Retrospective inquiry involved consecutive inclusion of 254 patients who had undergone male-to-female gender reassignment surgery involving penile inversion vaginoplasty at Essen University Hospital’s Department of Urology between 2004 and 2010. All patients received a questionnaire (eBox 2) by post, with a franked return envelope. The questions were contained within a follow-up questionnaire developed by Essen University Hospital’s Department of Urology (16). Because the process was anonymized, patients who had not sent back the questionnaire could not be contacted. The diagnosis of “transidentity” had been made previously following specialized medical examination and in accordance with ICD-10.

Statistical evaluation was performed using SPSS (Statistical Package for the Social Sciences, 17.0). Correlation analyses were performed using SAS (Statistical Analysis System, 9.1 for Windows). The distribution of categorical and ordinal data was described using absolute and relative frequencies. Fisher’s exact test was used to compare categorical and ordinal variables in independent samples. The Mann–Whitney U-test was used to compare satisfaction scale distribution of two independent samples. This nonparametric test was used in preference to the t-test because the Shapiro–Wilk test indicated that distribution was not normal. Spearman’s correlation analysis was performed.

A total of 119 completed questionnaires were returned, all of which were included in the evaluation. This represents a response rate of 46.9%. Because the questionnaires were anonymous, no data on patients’ ages could be obtained. The average age of a comparable cohort of patients at Essen University Hospital’s Department of Urology between 1995 and 2008 (17) was 36.7 years (16 to 68 years). The median time since surgery was 5.05 years (standard deviation: 1.6 years; range: 1 to 7 years). Not all patients had completed the questionnaire in full, so for some questions the total number of responses is not 119.

There was a correlation between self-perception as a woman (“How do you see yourself today?”) and perceived acceptance by society (r = 0.495; p <0.01). There was also a correlation between self-perception and answers to whether life had become easier since surgery (r = 0.375; p <0.01) and whether expectations of life as a woman had been fulfilled (r = 0.419; p <0.01). Patients who saw themselves completely as women reported higher scores for current satisfaction with their lives than patients who only saw themselves as more female than male (r = 0.347; p <0.01).

Patients were asked how easy they found it to achieve orgasm. A total of 91 participants answered this question: 75 (82.4%) reported that they could achieve orgasm. Of these, 19 (20.9%) still achieved orgasm very easily, 39 (42.9%) usually easily, and 17 (18.7%) rarely easily. Participants were also asked to compare their experience of orgasm before and after surgery (more intense/the same/less intense). Over half of those who answered this question (43 of 77, 55.8%) experienced more intense orgasm postoperatively, and 16 patients (20.8%) experienced the same intensity.

Orgasm was possible for 82.4% of study participants. The ability to achieve orgasm was lower than in an earlier study population (16). Figures in the literature vary widely (29% to 100%) and sometimes include small case numbers (Table 3). Overall, the figures for this study match those of comparable studies of a similar size. Finally, it is not clear why more than half the participants experienced orgasm more intensely following surgery than preoperatively. One possible explanation is that postoperatively patients were able to experience orgasm in a body that matched their perception.

The response rate of less than 50% must be mentioned as a shortcoming of this study. This may have led to a bias in the results. If all patients who did not take part in the survey were dissatisfied, up to 50.1% and 54.6% would be dissatisfied with aesthetic or functional outcome respectively. According to Eicher, the suicide rate in transgender individuals following successful surgery is no higher than in the general population (26), so suicide is a very unlikely reason for nonparticipation. Contacting transfemale patients for long-term follow-up after successful surgery is generally difficult (2, 3, 22, 23, 25, 27, 28). This may be because a patient has moved since successful surgery, for example, (21). Postoperative contact is particularly difficult in countries such as Germany which have no central registers. Response rates to surveys in retrospective research are between 19% (28) and 79% (29). Goddard et al. obtained a response rate of 30% in a retrospective survey following gender reassignment surgery (30). A follow-up survey performed by Löwenberg et al. had a similar response rate, 49% (19). It is also possible that the positive results of our survey represent patients’ wish for social desirability rather than the real situation. However, this cannot be verified retrospectively.

Taking into account the limitations mentioned above, the high rates of subjective satisfaction with outward female appearance and with aesthetic and functional outcome of surgery indicate that the study participants benefited from gender reassignment surgery. 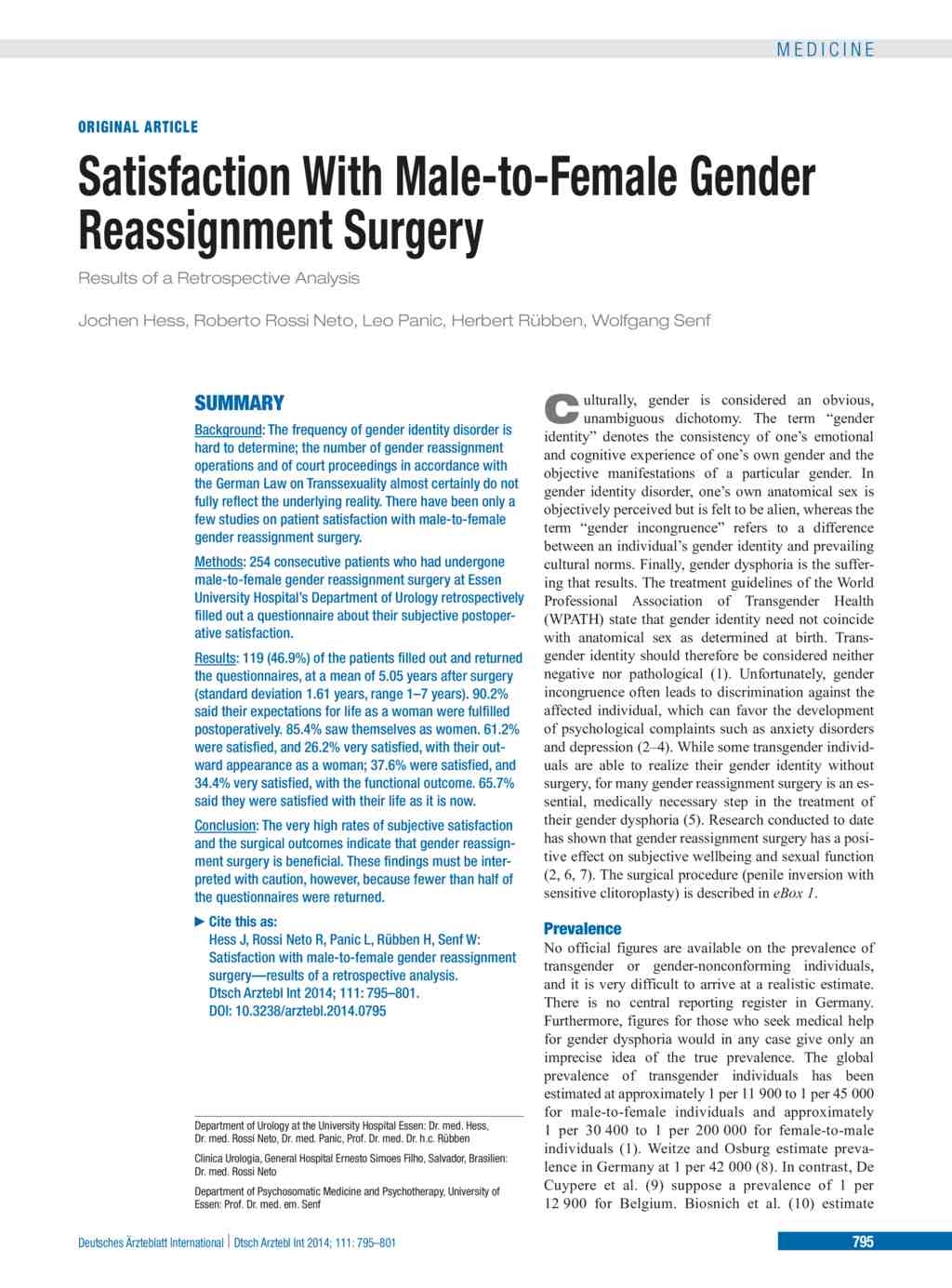