Marinova et al. regret that in our article (1) HIFU treatment was not mentioned. We wish to point out that our article does not represent a general overview on the treatment of pancreatic adenocarcinoma, but a brief summary of the German S3 guideline update (2). HIFU is not included in this update. Only very limited data are available related to the question whether HIFU offers survival benefits in patients with pancreatic cancer. The cited Chinese study by He et al. (2002) on the prolongation of survival by HIFU treatment in 251 patients with advanced pancreatic adenocarcinoma was sourced from a volume of congress papers and has since then not been published in a peer-reviewed journal, according to a literature search conducted by us. The studies that have been published regarding HIFU are either case series or single-arm phase II studies on locally advanced pancreatic carcinoma conducted in Asia, such as the study mentioned by Marinova et al. about the combination of gemcitabin and HIFU. There is a lack of randomized controlled trials comparing HIFU with established local treatment modalities, such as radiotherapy. A very recently published Japanese study evaluating the safety of HIFU in pancreatic carcinoma showed a moderate effect of this treatment. This single-arm study reported disease control with HIFU treatment. Hence the authors postulate an additive effect of HIFU complementing chemotherapy (3). Consistently, some degree of efficacy is attributed to HIFU with regard to local pain control in patients with pancreatic carcinoma. However, supportive treatment was not part of the updated guideline, but will be dealt with in the next guideline update, which will also include methods for local pain control. Of note, HIFU is currently only available in few centers in Europe, in Germany apparently only in Bonn.

Prof. Seufferlein has received consultant’s fees and reimbursement of meeting participation expenses from Sanofi-Aventis, Roche, Merck-Serono, Lilly, and Celgene. He has been paid for preparing scientific meetings and lectures by the Celgene, Roche, Merck-Serono, and Amgen companies and the Falk Foundation. He receives financial support from Celgene for a research project that he initiated. 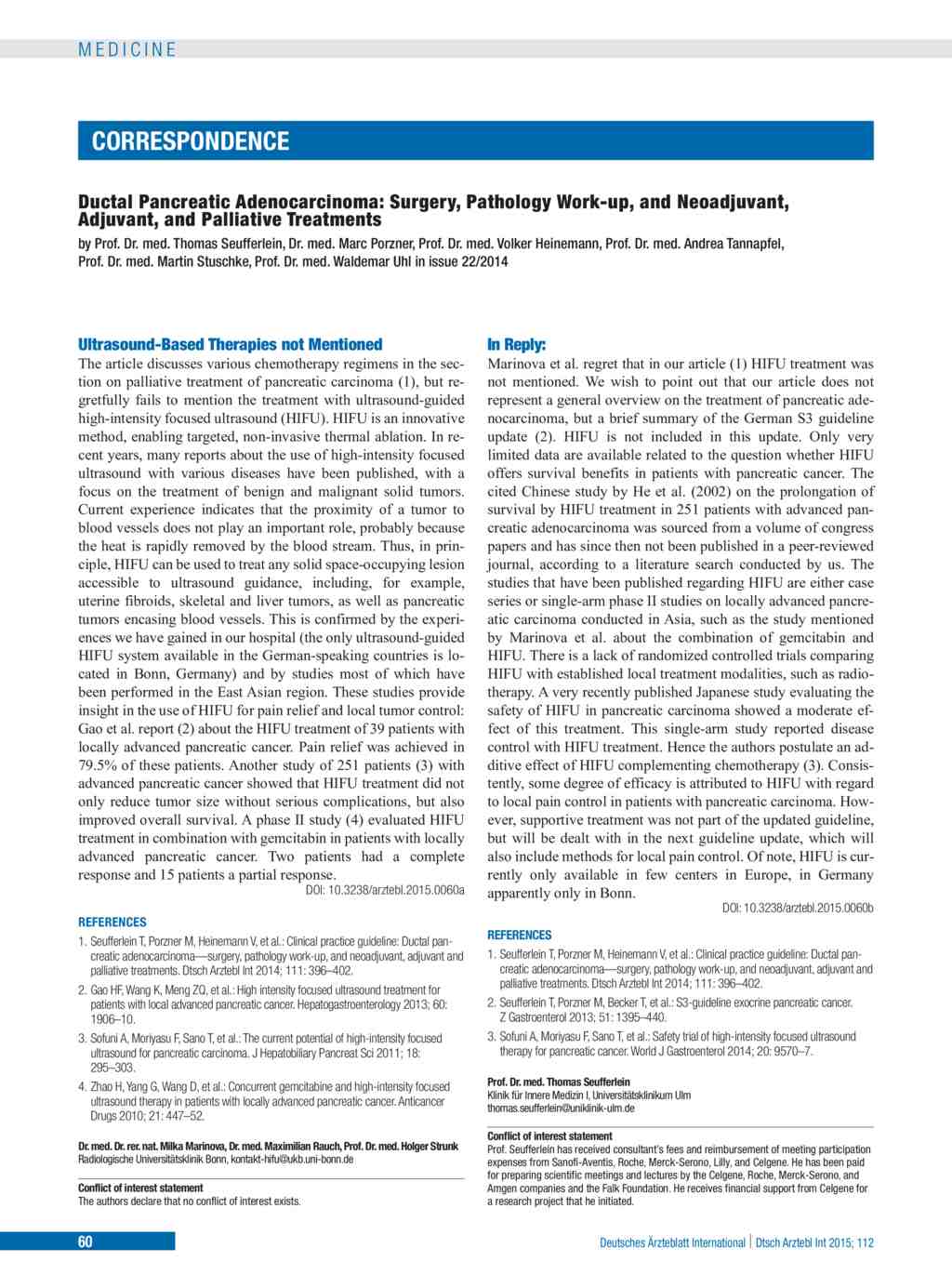